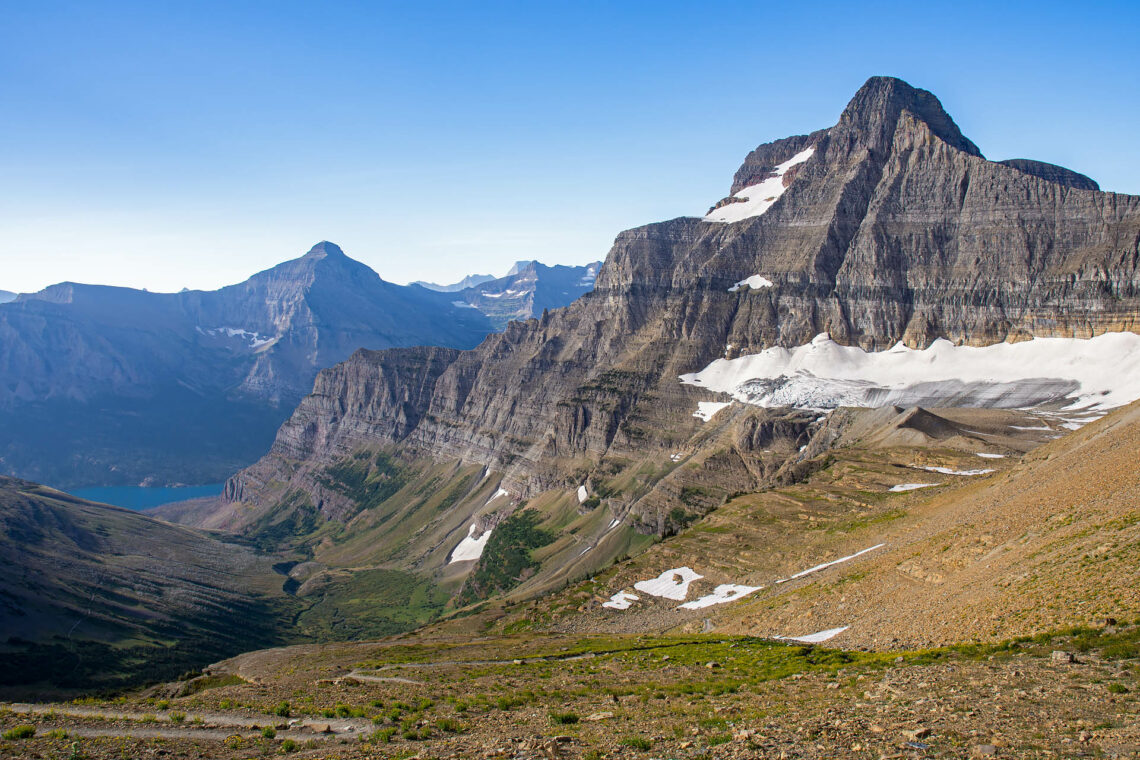 About five miles east of Logan Pass and the Continental Divide, Siyeh Pass forms the saddle between Mt. Siyeh (10,014’) and Matahpi Peak (9,364’). A 10-mile point-to-point trail, Siyeh Pass sees significantly less foot traffic than the wildly popular Highline Trail that runs along the western edge of the Divide.

The trail for Siyeh Pass begins at Siyeh Bend1, about three miles east of Logan Pass on the Going-to-the-Sun Road. There are a couple of wide shoulders along either side of the road for parking, which can collectively accommodate maybe a couple dozen cars.2 Because the trail is a point-to-point route, it’s easiest to use the park’s shuttles to get back to your vehicle.3 Alternatively, you could park two vehicles at either end of the trail, or hike it as a more aggressive out-and-back if you are feeling super ambitious and have a long summer day (20 miles and nearly 6,000’ of vertical gain round-trip).

We opted to start from the trailhead at Siyeh Bend, which actually starts out as the Piegan Pass Trail. From the road, the dirt track quickly dips down to follow Siyeh Creek before hairpinning to the right and beginning a gentle climb up through a thick forest. After about 1.1 miles, the trail reaches its first junction with the Piegan Pass (Continental Divide) Trail. To get to Siyeh Pass, follow the junction to the left (north). The righthand fork heads south, returning to the Going-to-the-Sun Road at the Jackson Glacier Overlook.

Continuing through the forest, the trail makes two quick water crossings across Siyeh Creek (there are footbridges at both crossings) before reaching a second junction with the Piegan Pass Trail (about 2.7 miles from the trailhead). The trail to Siyeh Pass breaks off to the east (right), while the fork to the northwest (left) leads to Piegan Pass and Lake Josephine. After taking a right toward Siyeh Pass, the trail traverses Preston Park, a collection of sprawling alpine meadows tucked between the soaring summits of Siyeh and Matahpi. 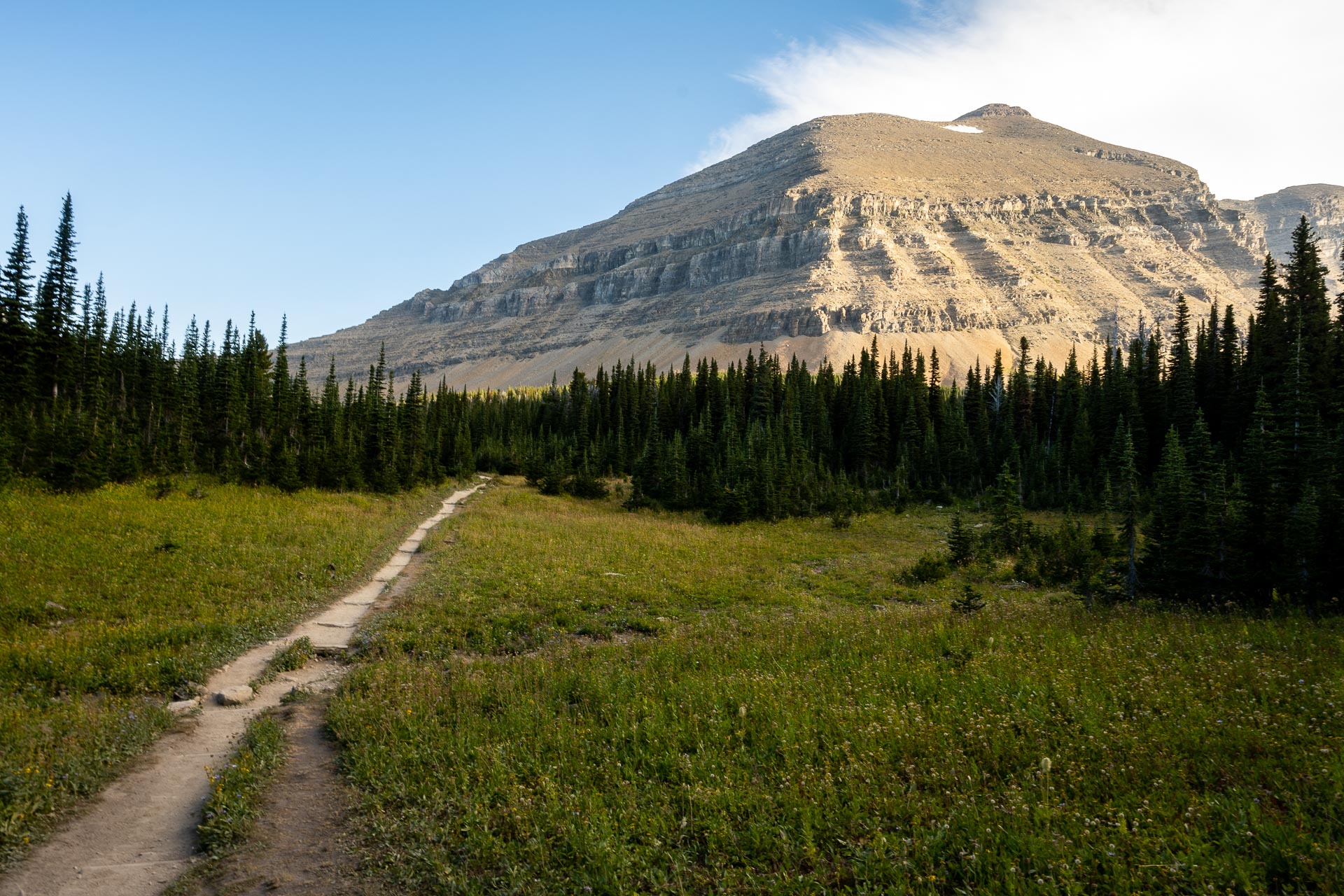 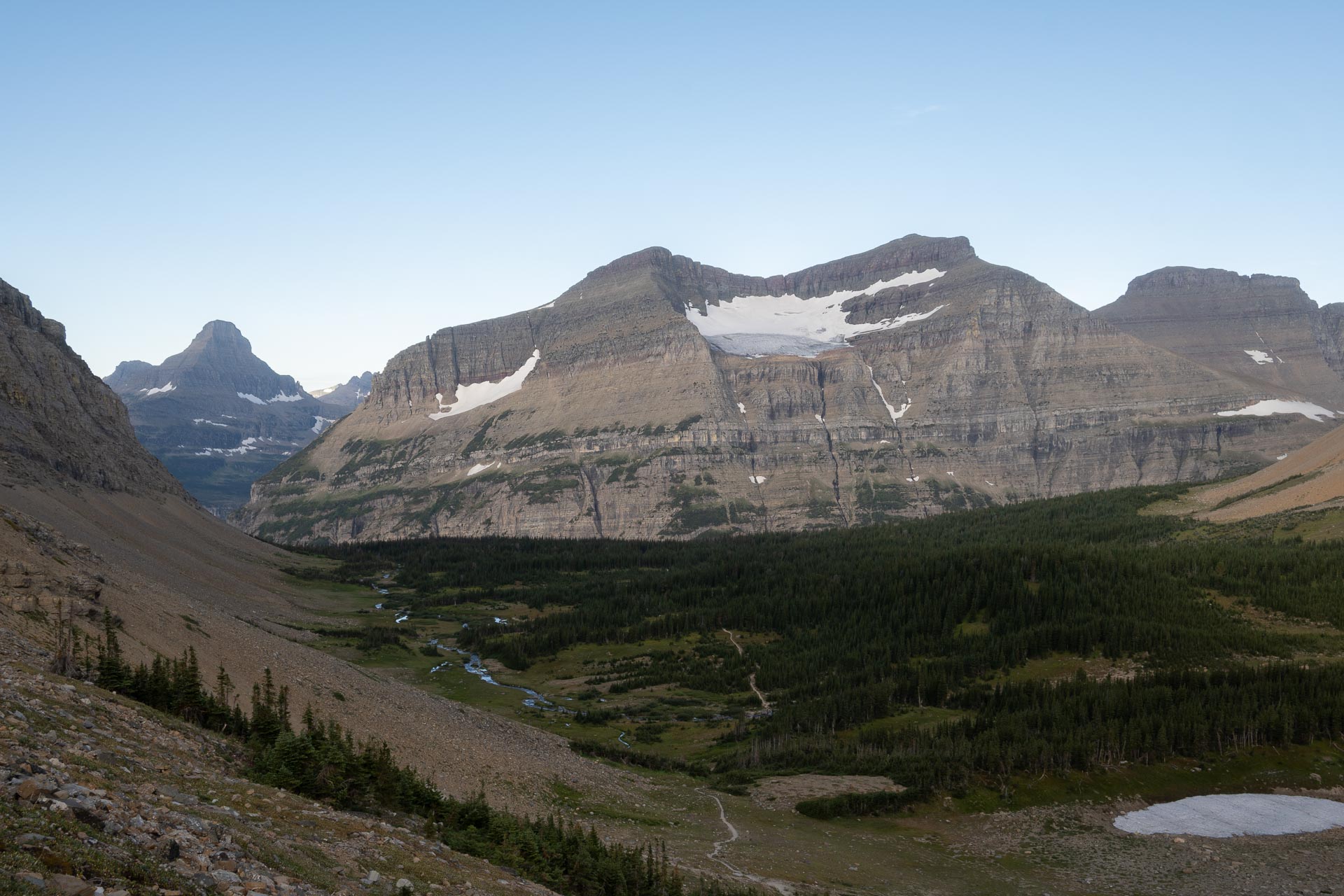 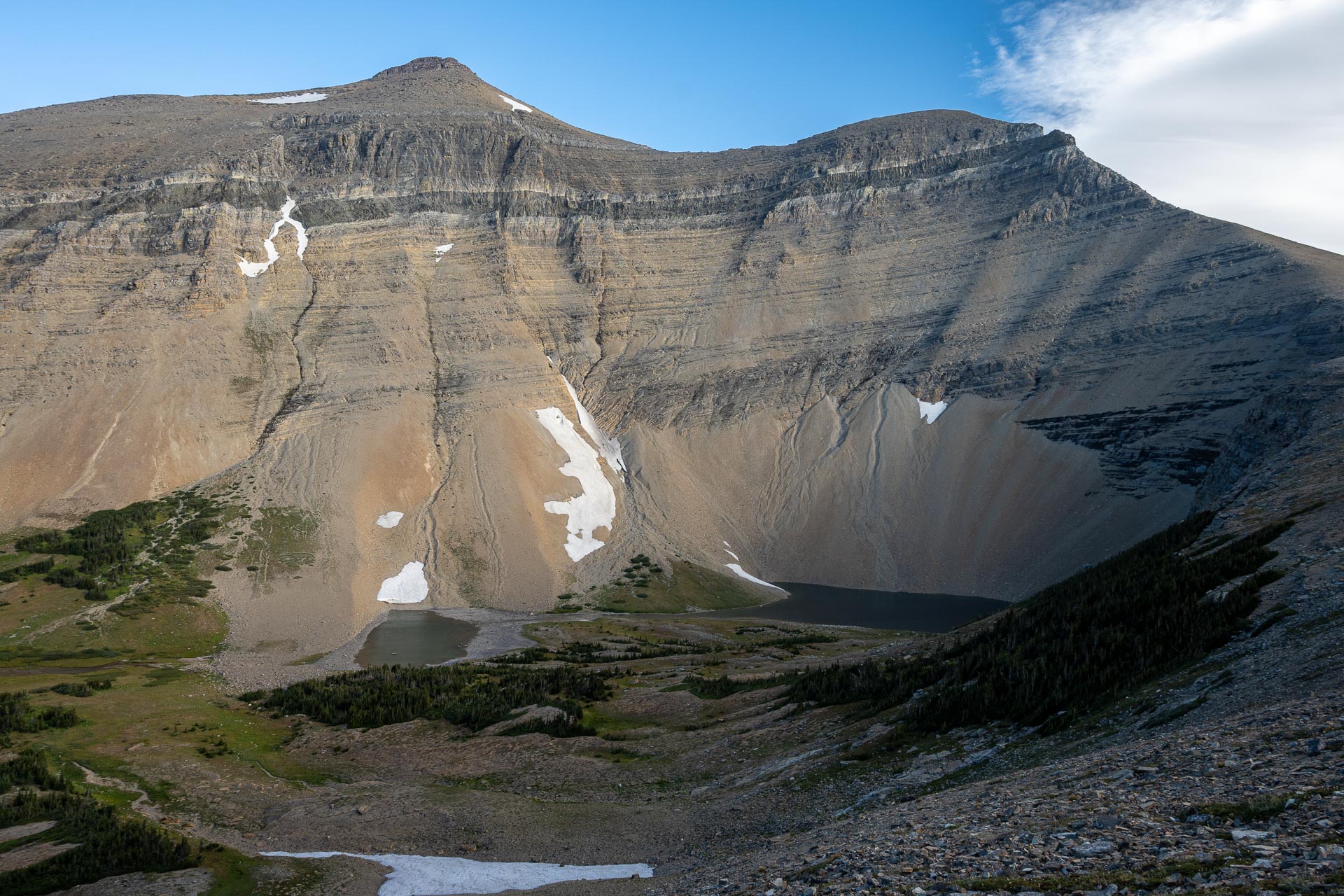 After crossing through Preston Park, the trail steepens slightly as it begins to switchback up the northwest side of Matahpi Peak. After about 1.5 miles and 1,000’ of gain up the pass, the trail levels off, giving sweeping views out to the Boulder Creek drainage area and back to Mt. Siyeh, soaring above a couple of small lakelets. 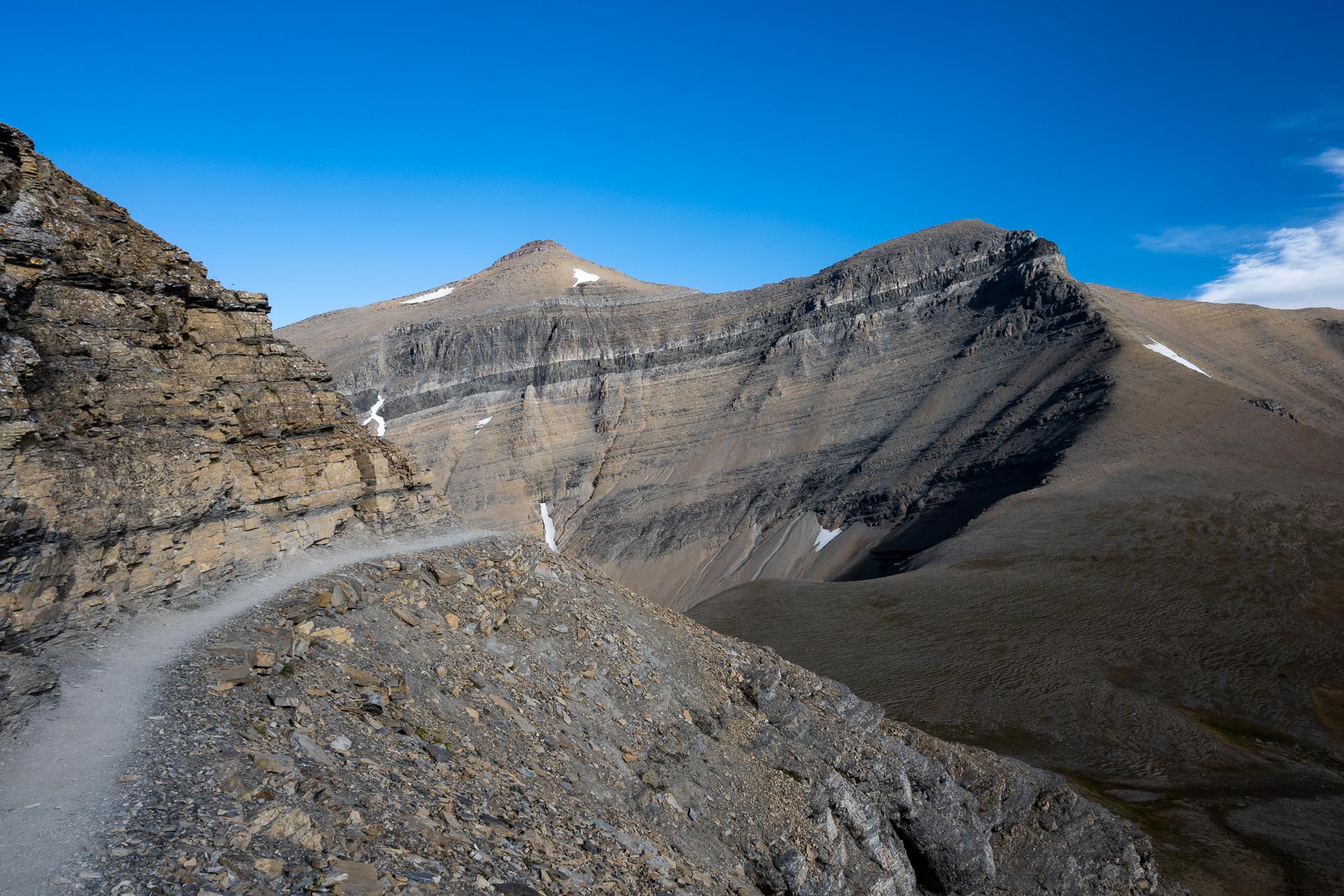 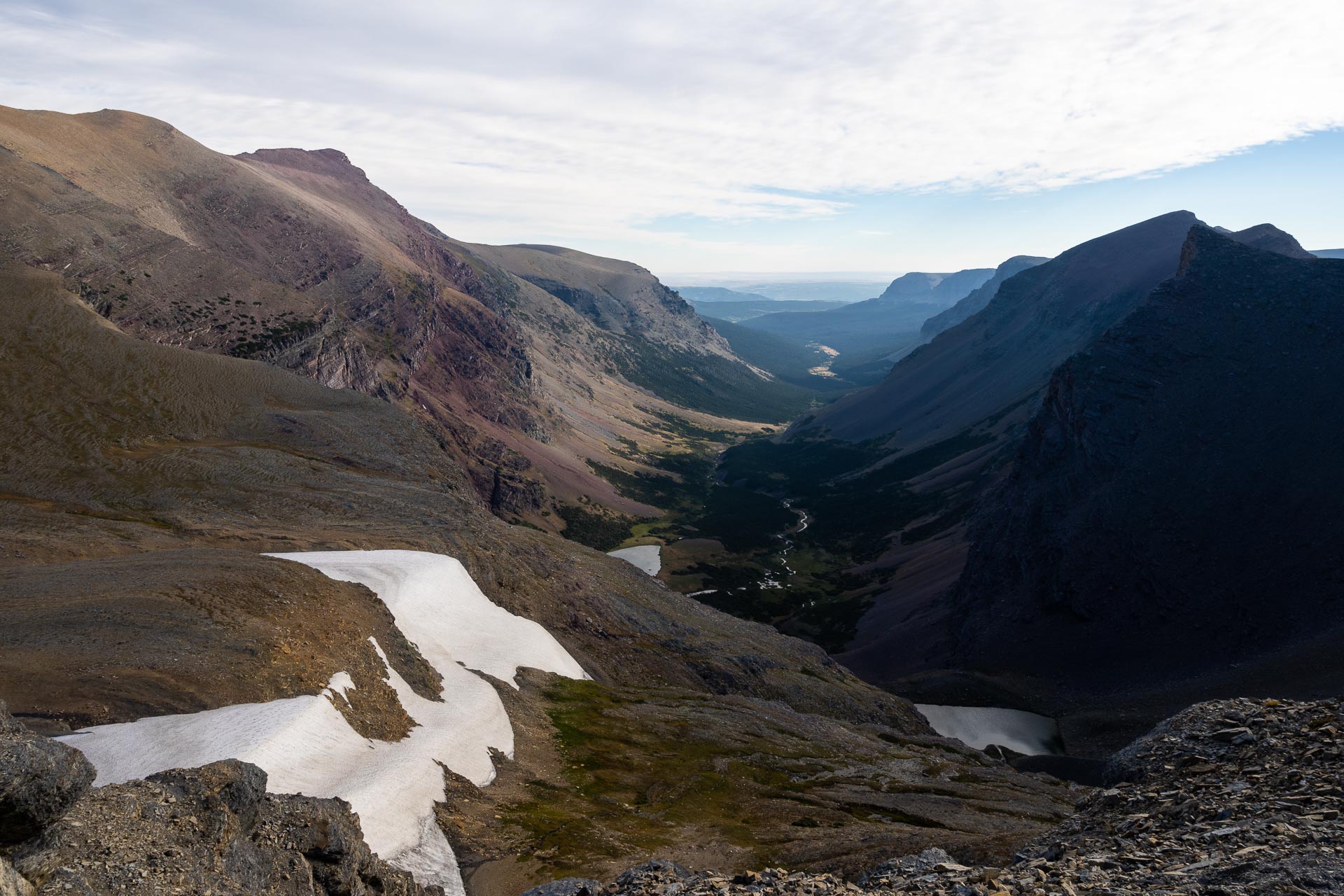 As the trail wraps around the eastern flank of Matahpi Peak, Going-to-the-Sun Mountain’s scenic summit comes into view. Balanced on a cirque (a bowl-shaped depression) between the two peaks, sits the Sexton Glacier. The shelf of ice rests at around 8,000 feet and, regrettably, has receded by some 25% since the mid-1960s. The views from here are just breathtaking, though it’s heartbreaking to ponder how much longer we’ll be able to look up in awe at the frozen masterpiece.

The highpoint of 8,100’ is roughly the midpoint of the route. From here, the track descends down to the Baring Creek Valley via an impressive series of sharp switchbacks. Throughout the 3,500-foot descent, the views are endless and the scampering ground squirrels numerous. Beyond the glaciated peak of Going-to-the-Sun Mountain, which dominates the landscape, Little Chief Mountain towers above the western shore of Saint Mary Lake. 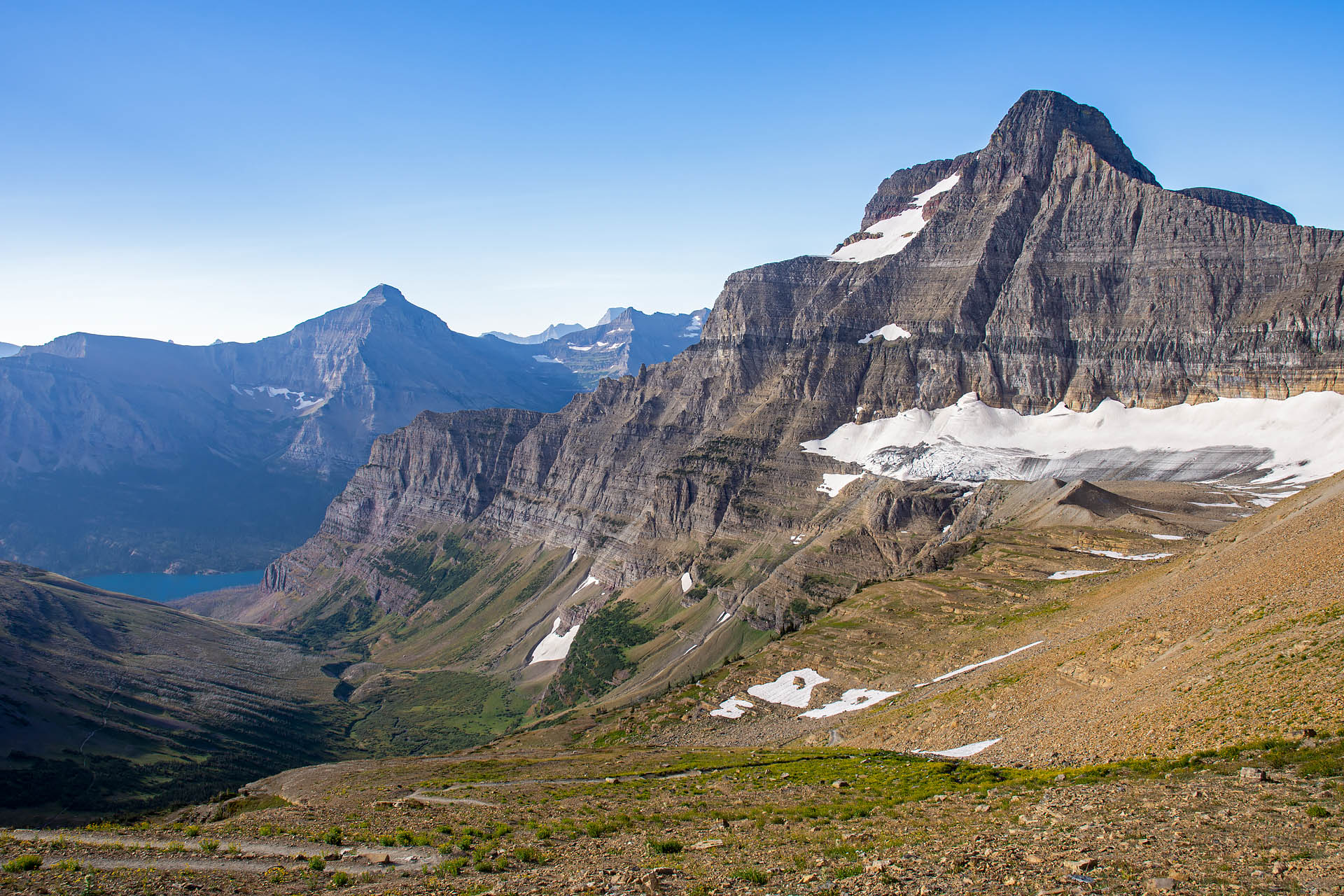 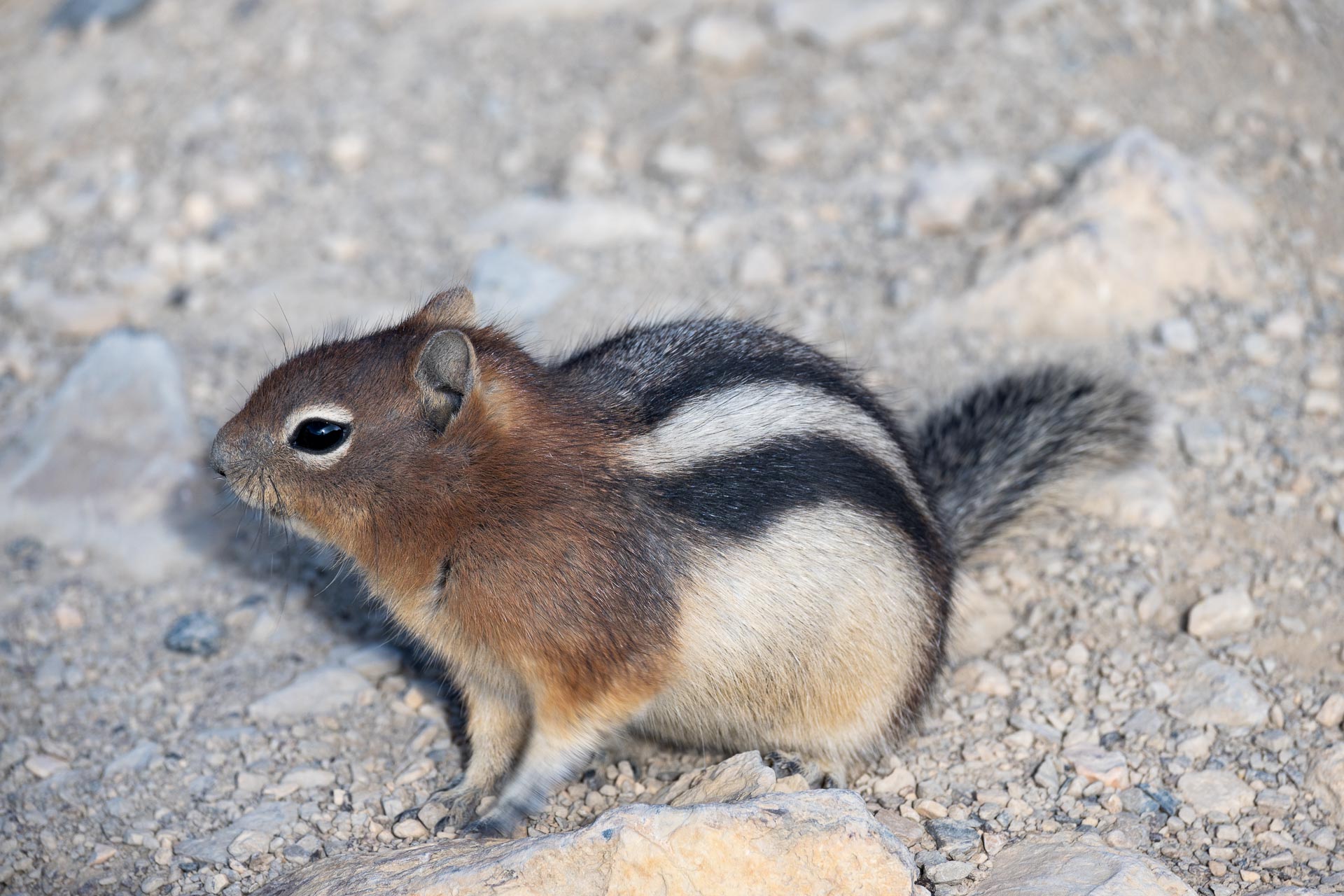 After finally reaching the valley, the trail continues its gradual descent through swaths of scrubby brush and an old burn area along Baring Creek before ultimately reaching Sunrift Gorge. 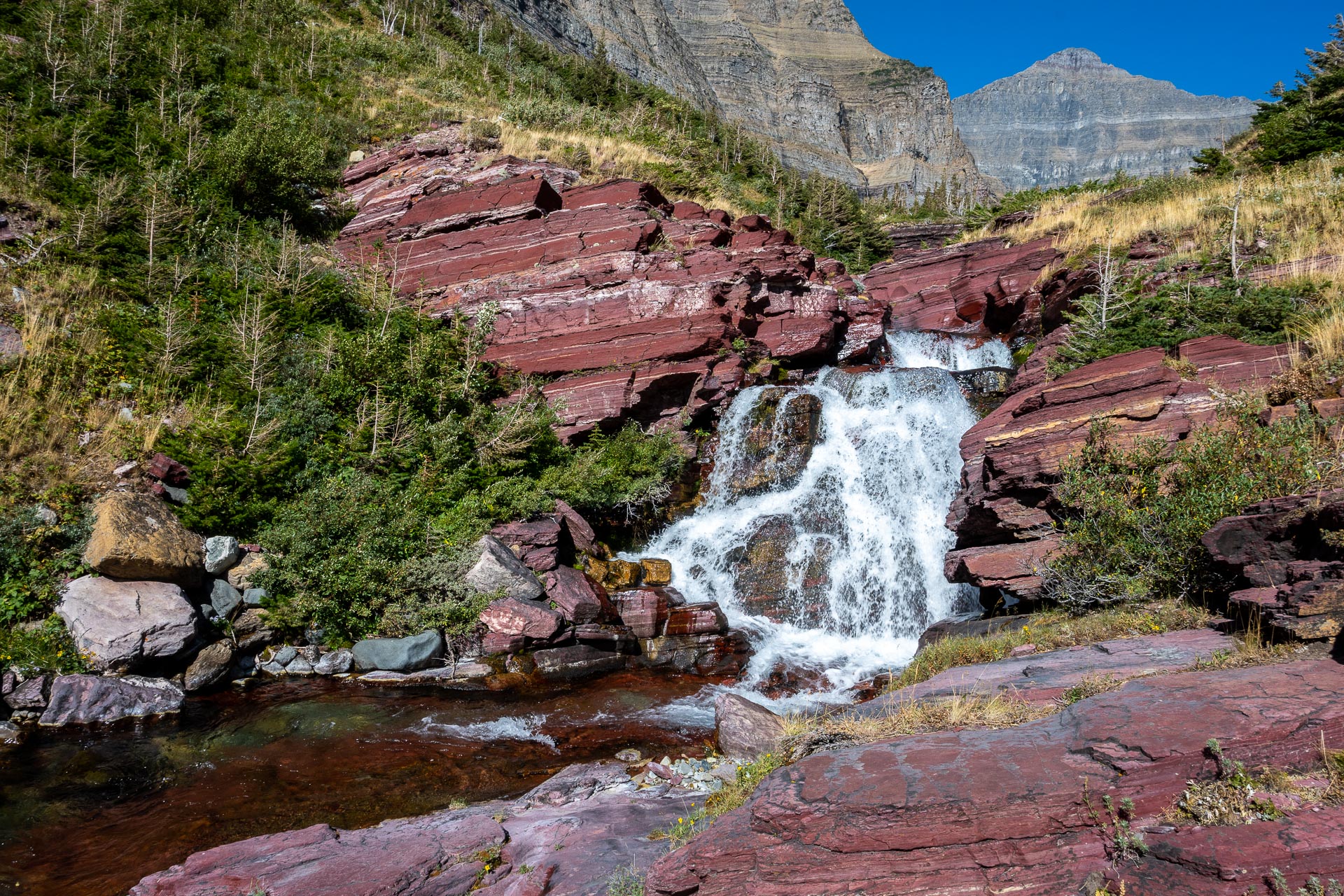 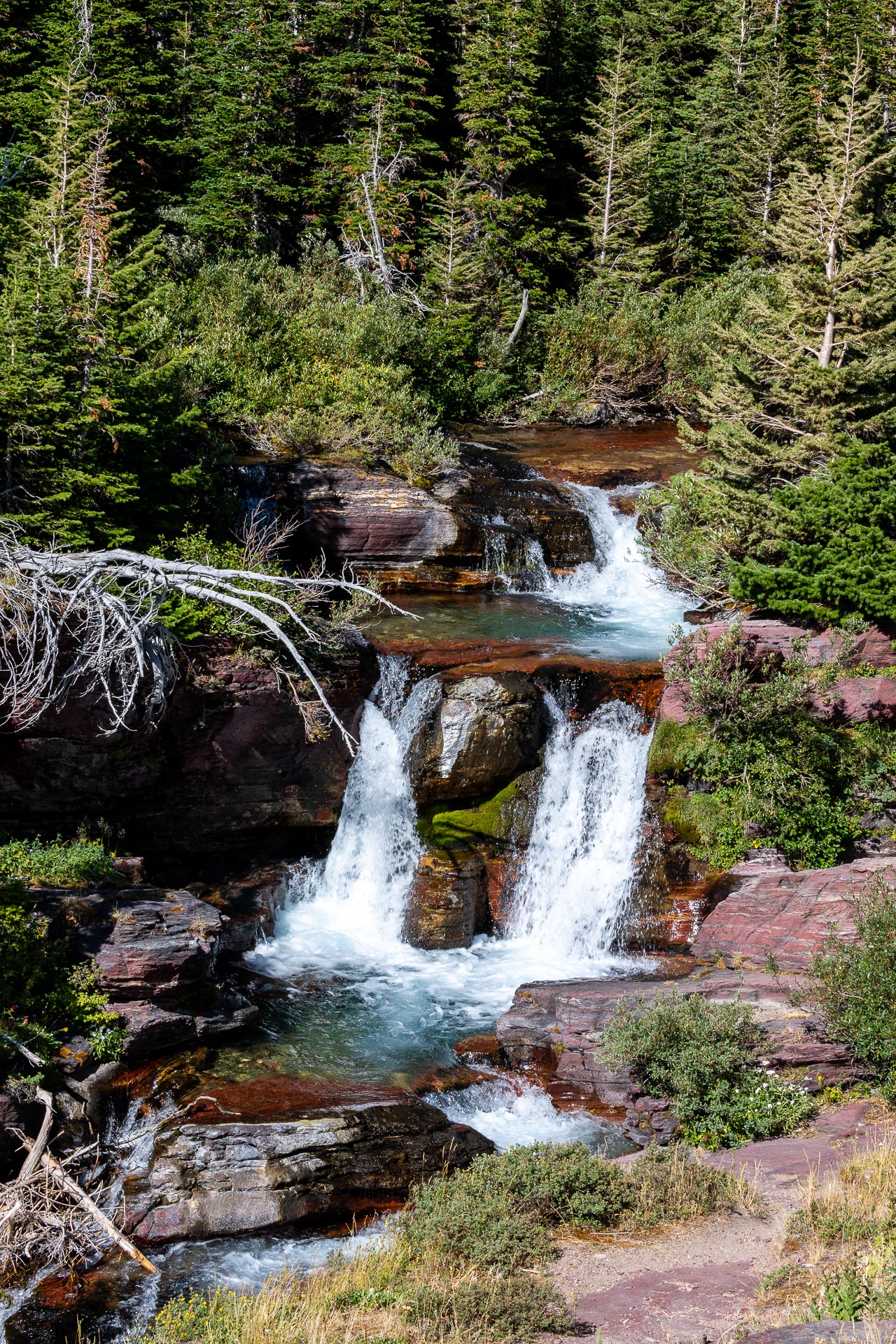 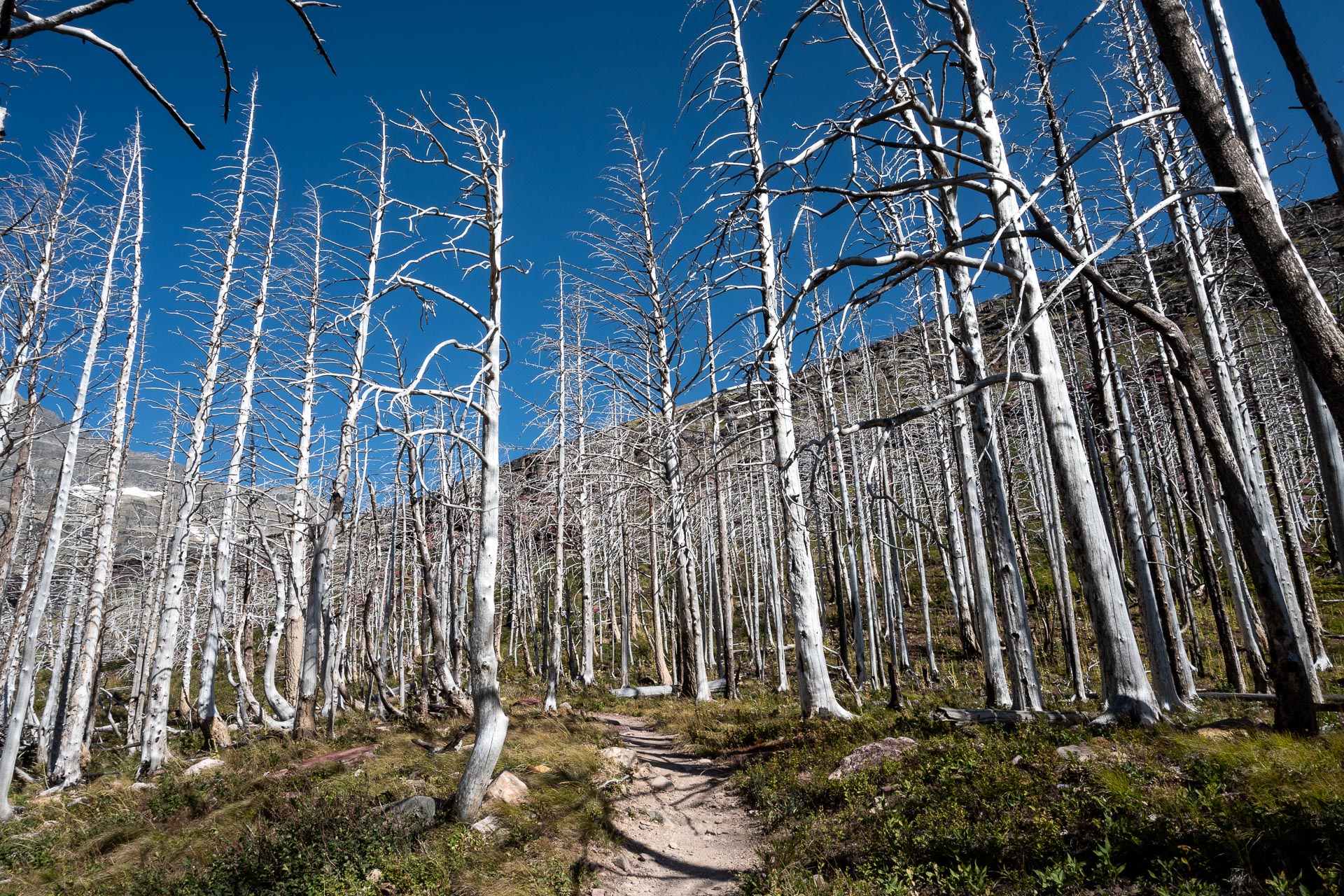 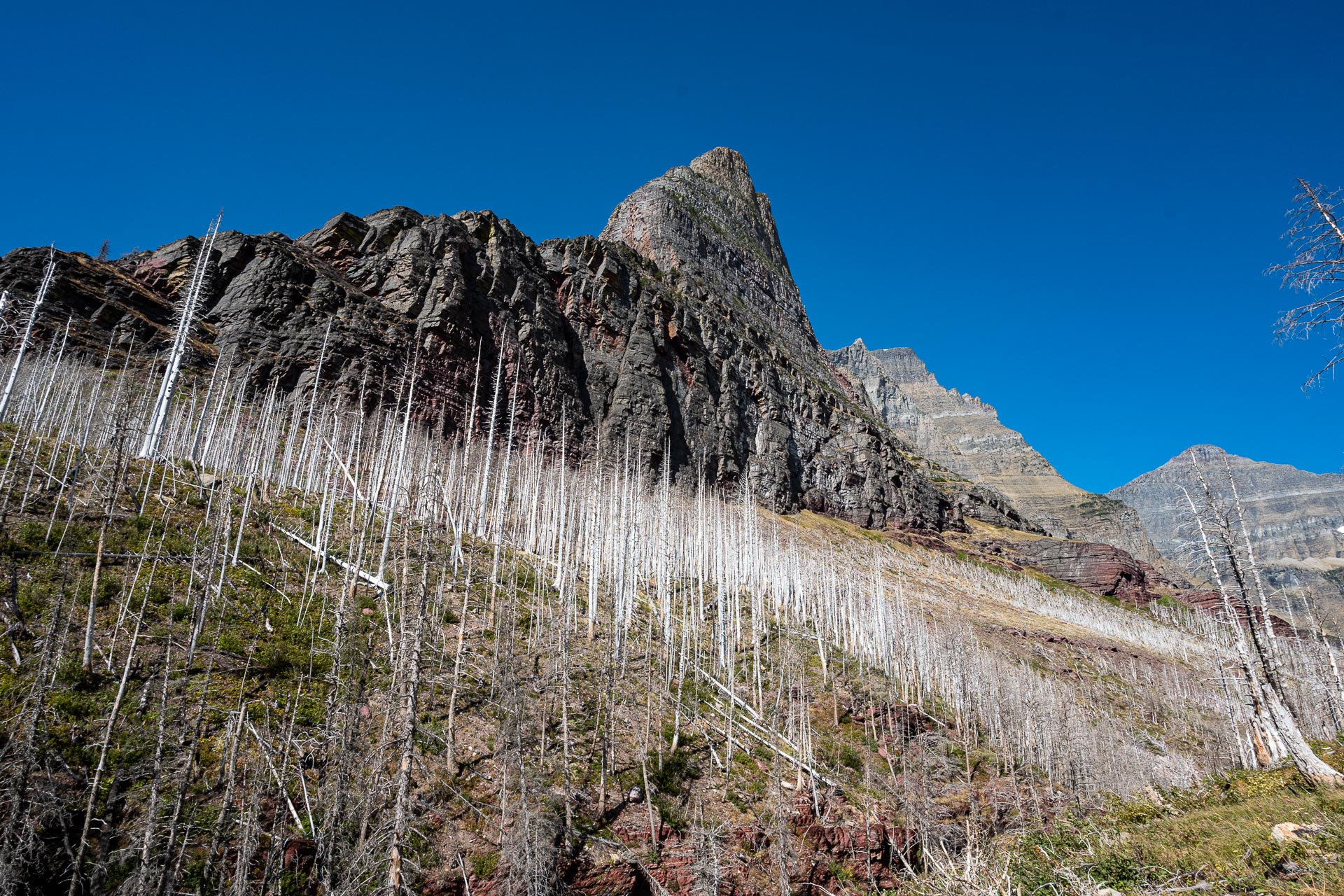 Overall, we really enjoyed the hike. The longer distance makes it a great escape from the crowds, who tend to frequent the shorter, more accessible paths. I think we only passed six other hikers and a pair of park rangers the entire length of trail. And while the second half (Saint Mary side) of the hike really only offers one unchanging view, it’s certainly a gorgeous one. If you’ve got some time in Glacier, Siyeh Pass is definitely worth exploring. 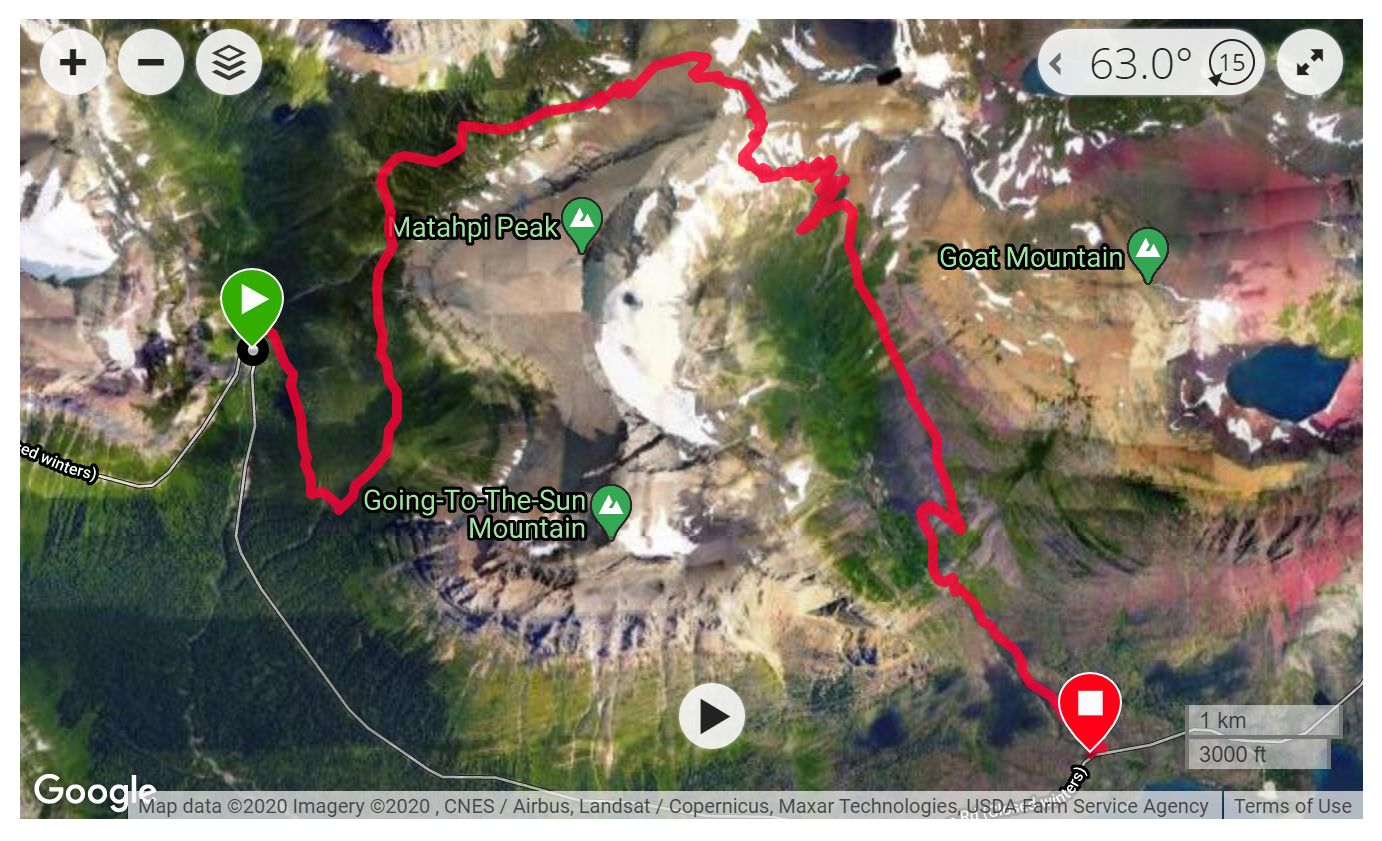 1The trail is most commonly hiked west to east, but can also be hiked in the reverse, from Sunrift Gorge to Siyeh Bend. If hiking in this direction (east to west), expect about 1,100’ more vertical gain. Alternatively, the trail could be hiked as an out-and-back to the pass from either direction, as some hikers seemed to prefer.

2There is also parking at Sunrift Gorge, though the lot accommodates fewer vehicles than the areas at Siyeh Bend. Plan on arriving early at either lot to make sure you secure a spot.

3Glacier’s shuttle service runs between most stops along the Going-to-the-Sun Road from around 9 a.m. to between 4 – 6 p.m., depending on location. Make sure to consult the most current timetables before embarking on your hike: https://www.nps.gov/glac/planyourvisit/shuttlestops.htm. If you aren’t confident you’ll finish this hike (or any other in the park) in time to catch the last shuttle of the day, it may be helpful to park a car at your intended finishing end, then catch a shuttle up to the hike’s starting point. That way, no matter what time you finish hiking, you’ll end at your vehicle – eliminating the need to wait around for a shuttle or worry about missing it.