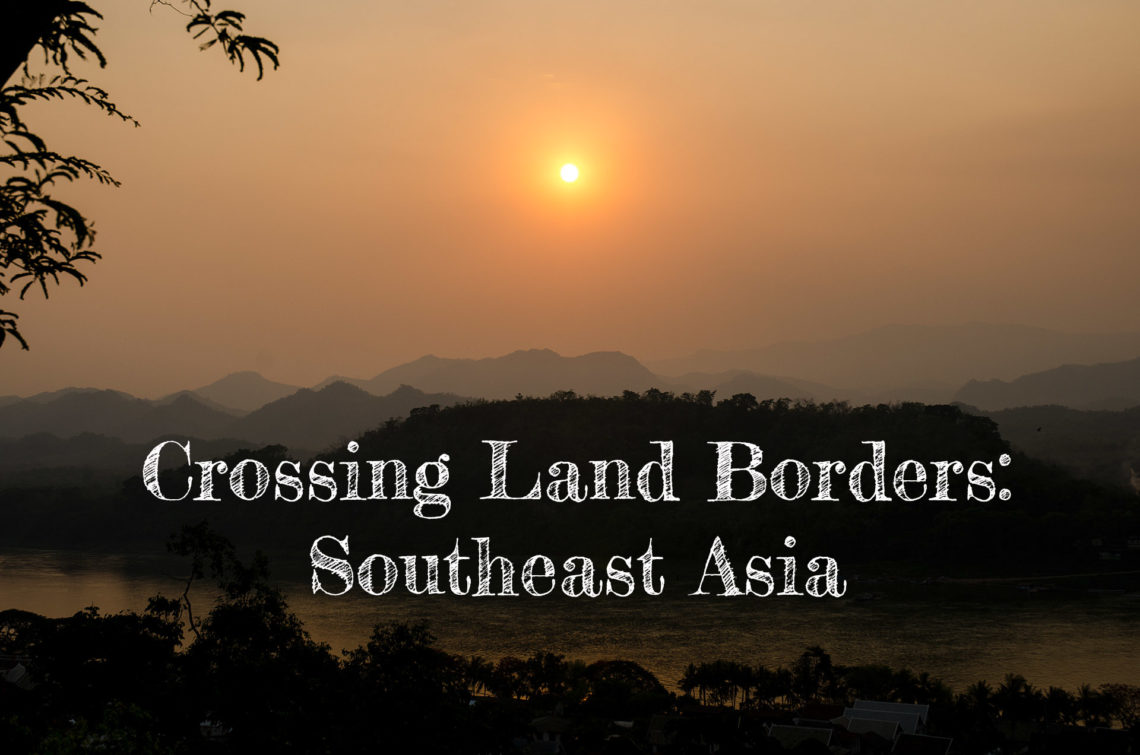 When we were beginning our journey, one of the things we were a bit curious about was crossing borders between countries in Asia. From what we’d read, it seemed pretty straightforward, with the biggest gripe being the occasional vague fee that some countries try to squeeze out of foreigners’ pockets. Of course, we still were a little hesitant, having no working knowledge of any of the languages. After crisscrossing half a dozen borders, our experience mirrored what we had read – transit to border patrol was readily available, immigration was habitually hassle-free, and any unspecified fees were at least minimal. The only time we really felt extorted was at the Thai-Lao border, by the ravenous tuk-tuk drivers attempting to charge exorbitant (for the area) and non-negotiable fees to/from the border patrol station. But really, not a big deal… also avoidable if you are willing to hoof it a few kilometers and/or hitch a ride.

Here, we thought we’d provide a short summary of our border crossings (obviously only some of the options available) – hopefully useful for our fellow backpackers looking to spend some time in Asia:

From Houay Xai, we grabbed a slow boat to Luang Prabang, which involved two days of floating down the Mekong (with an overnight in Pak Beng). While it’s kind of a cool experience, the boat is really primitive (i.e. wooden benches and automobile seats bolted haphazardly to the wood floor). Additionally, it’s kind of a haven for young, party-minded travelers (i.e. loud and drunk). If you do choose to take the slow boat, make sure you arrive at the dock early on both mornings; they cram on more people than there are seats available, and some unlucky individuals were relegated to a cramped spot on the floor near the toilet, or forced to perch on the back “deck” of the boat. Here are a few details:

Note: The total price for all of the tuk-tuks for this leg of the trip, from Chiang Khong all the way to Luang Prabang, would have cost us about $13 USD for two people, which seems a bit ridiculous when you consider you can live for about twice this for an entire day. If you decide to forgo the predatory tuk-tuks as we did, you can certainly save a bundle here.

Note: The Vietnam border was the first time our bags were x-rayed/inspected at all, and the process here was a bit longer than the previous borders we crossed.

Note: This was easily the worst leg of our entire trip. The flights we found from Hanoi to Beijing were fairly expensive, so we thought we’d check out some of China’s vast landscape by traveling by train (though the train fares were also pricey). I know, it’s a long haul but I guess the overland travel sounded like a fun adventure. The Chinese trains, however, are terrible in that they allow smoking between the carriages, yet the doors between the cars don’t close automatically. Thus, they may as well just allow smoking everywhere, because the toxic fumes diffuse rapidly throughout the carriages and cabins. By the time we reached Beijing, I was one big ball of sinusitis. Additionally, on the overnight train from Hanoi to Nanning, you are pulled off the train twice in the middle of the night to pass through Vietnamese and Chinese border patrols. Both stops take a good bit of time, and are separated by about an hour, so it’s pretty hard to get any sleep.