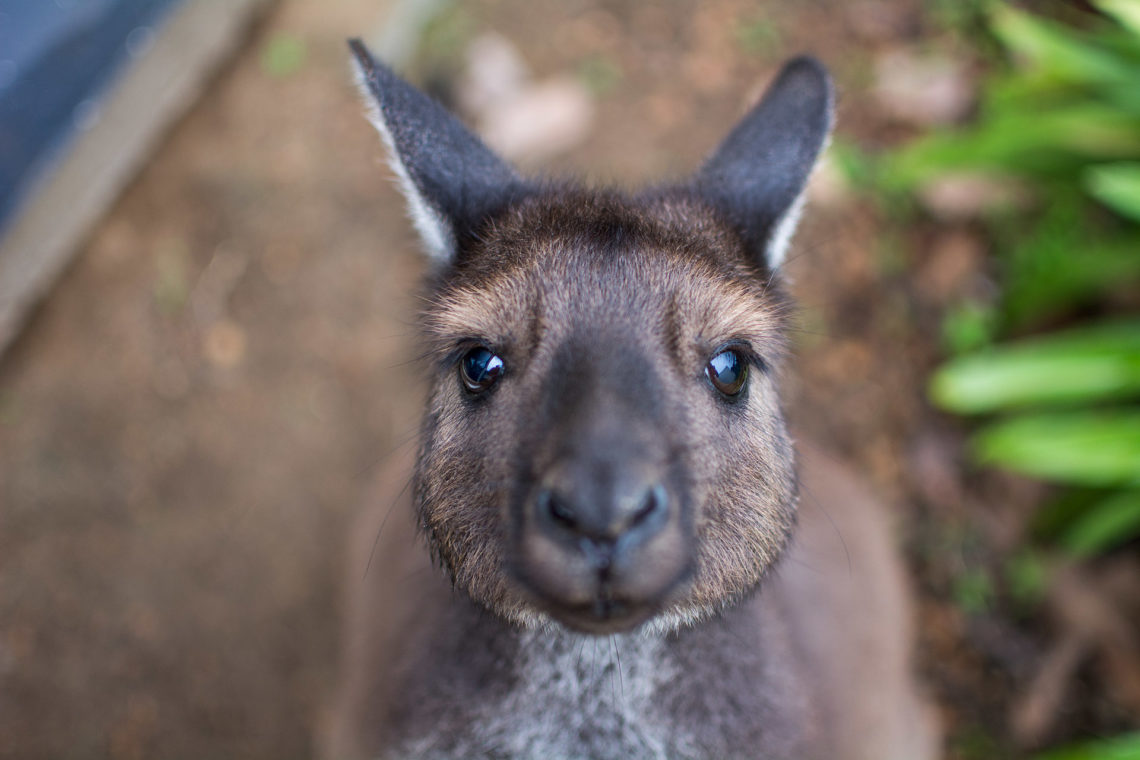 Our week on Kangaroo Island was spent at Blue Hills, a quaint little farmstay nestled in the island’s heartland. One of the most rural parts of KI, the central farming region was secluded and tranquil, and we rarely spotted another vehicle on our isolated dirt road. While driving along in the evening, we’d barely top 30 kph as we vigilantly navigated through a sea of kangaroos, wallabies, and brush-tailed possums, all the while never seeing a pair of headlights from another car. Though more remote than many others may prefer, the farm’s central location gave us convenient access to parks on all sides of the island, in addition to complete serenity. 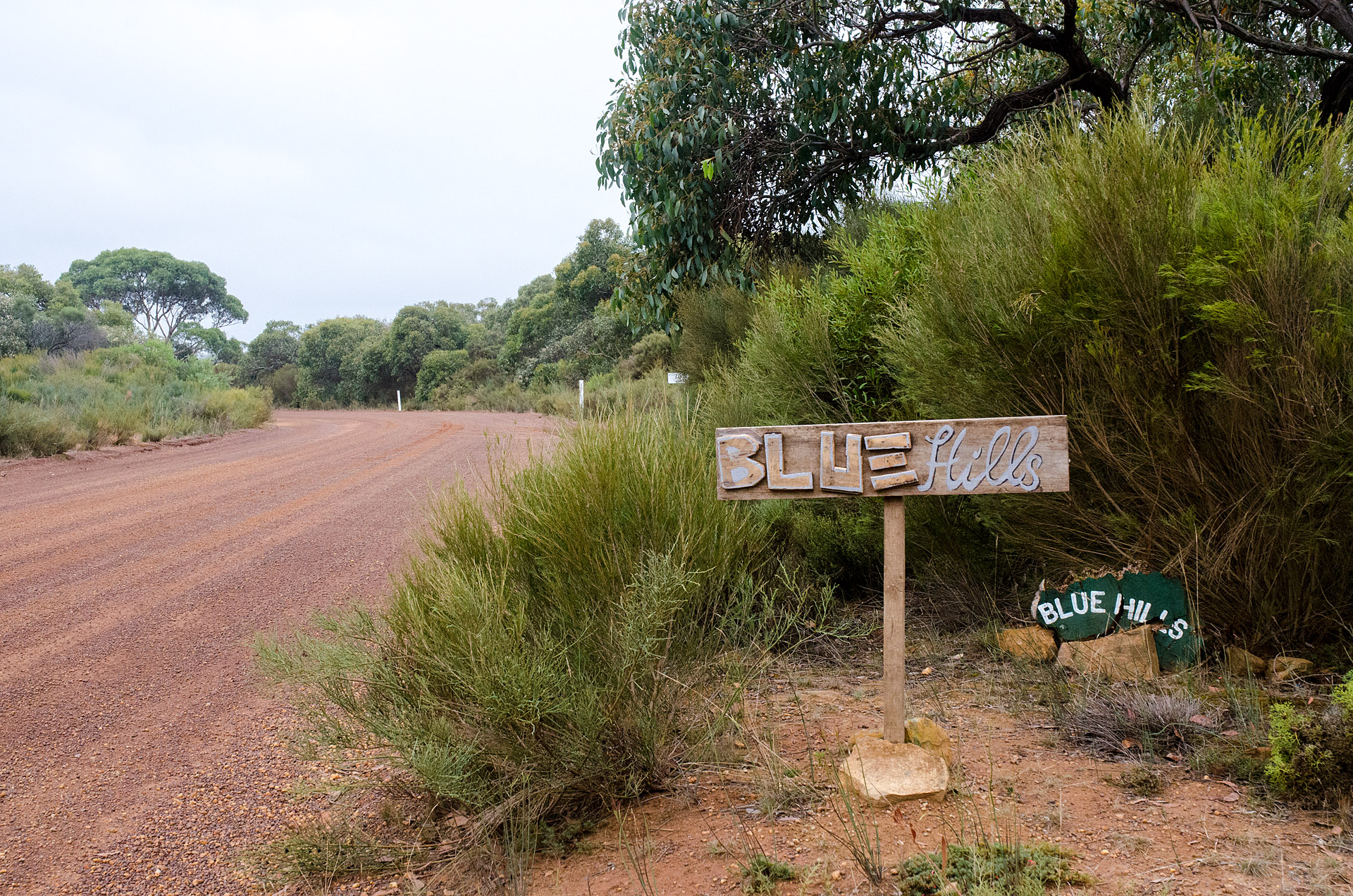 The cozy cottage we called home was set just off the back porch of Jenny & Leon’s modest farmhouse, surrounded by eucalyptus trees and sprawling animal pastures. The rustic bungalow immediately felt like home as well. In the center of the tiny kitchen sat a mid-century, formica dining table with a chrome frame. Four chrome and red vinyl-upholstered chairs were tucked carefully around the perimeter of the vintage table. It reminded me so much of the kitchen in my great-grandmother’s humble, 1920s cape-style home – all that was missing was the red hoky behind the door. Even more fond memories from childhood flooded my mind when I opened the freezer door and discovered that Jenny had stocked it with little cups of Neapolitan ice cream, my Nana’s favorite. I took a seat in one of the red vinyl chairs, closed my eyes and imagined I had just sprinted through Nana’s backyard, past the lilac bushes and gigantic maple tree, to Ma’s house. 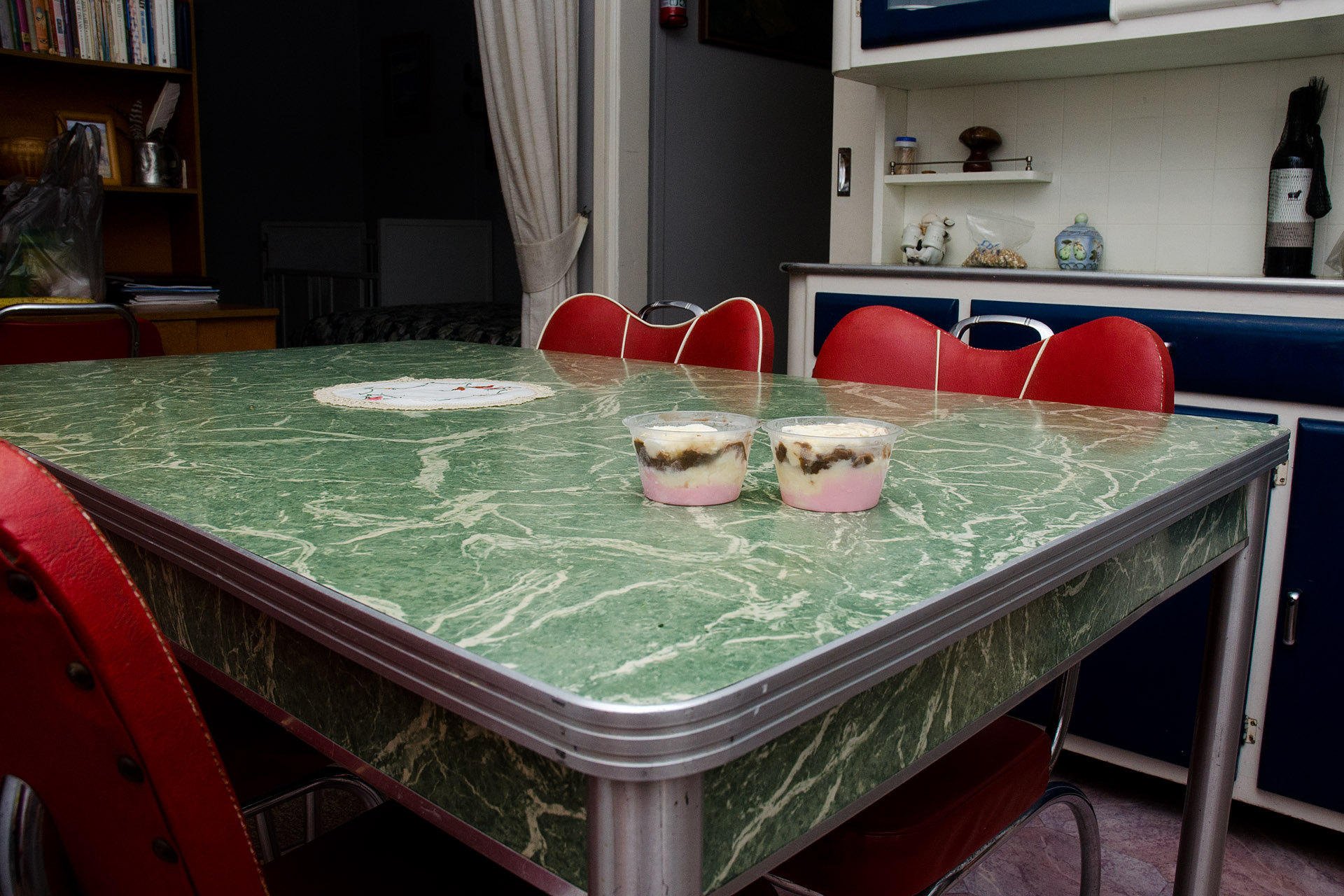 The only difference between the kitchen in West Keene and that of our farm cottage on Kangaroo Island was the animals roaming just outside the window. As I peered through the sheer lace curtain above the kitchen sink, I noticed an inquisitive alpaca staring in at us. I’ll tell you what – if Nana’s house had had animals like the Friendly Farm in addition to her fully-stocked freezer, I never would have left! Anyway… back at the farmhouse we quickly and eagerly acquainted ourselves with our new friends: Buddy the dog, Ollie the alpaca, and Weary the pony. There was also a myriad of sheep, cows and chickens, four adult kangaroos, and a horde of young chicks scurrying around the yard. Ollie the alpaca loved a good scratch behind the ears, and was quick to get jealous if we showered the kangaroos with too much attention. He even came to visit us each night as we made dinner in the kitchen, and we’d open the window so he could stick his nose in and sniff around. Ollie also adored the camera, and I think he may have a future in Hollywood… ‘What? You mean you didn’t want my alpaca noseprints all over your lens?’ Buddy, a high-energy canine, was one of the most obedient and friendly dogs we’ve ever met. Jenny even taught him to “ride” Weary, who has got to be the most tolerant and laid-back pony on the planet. 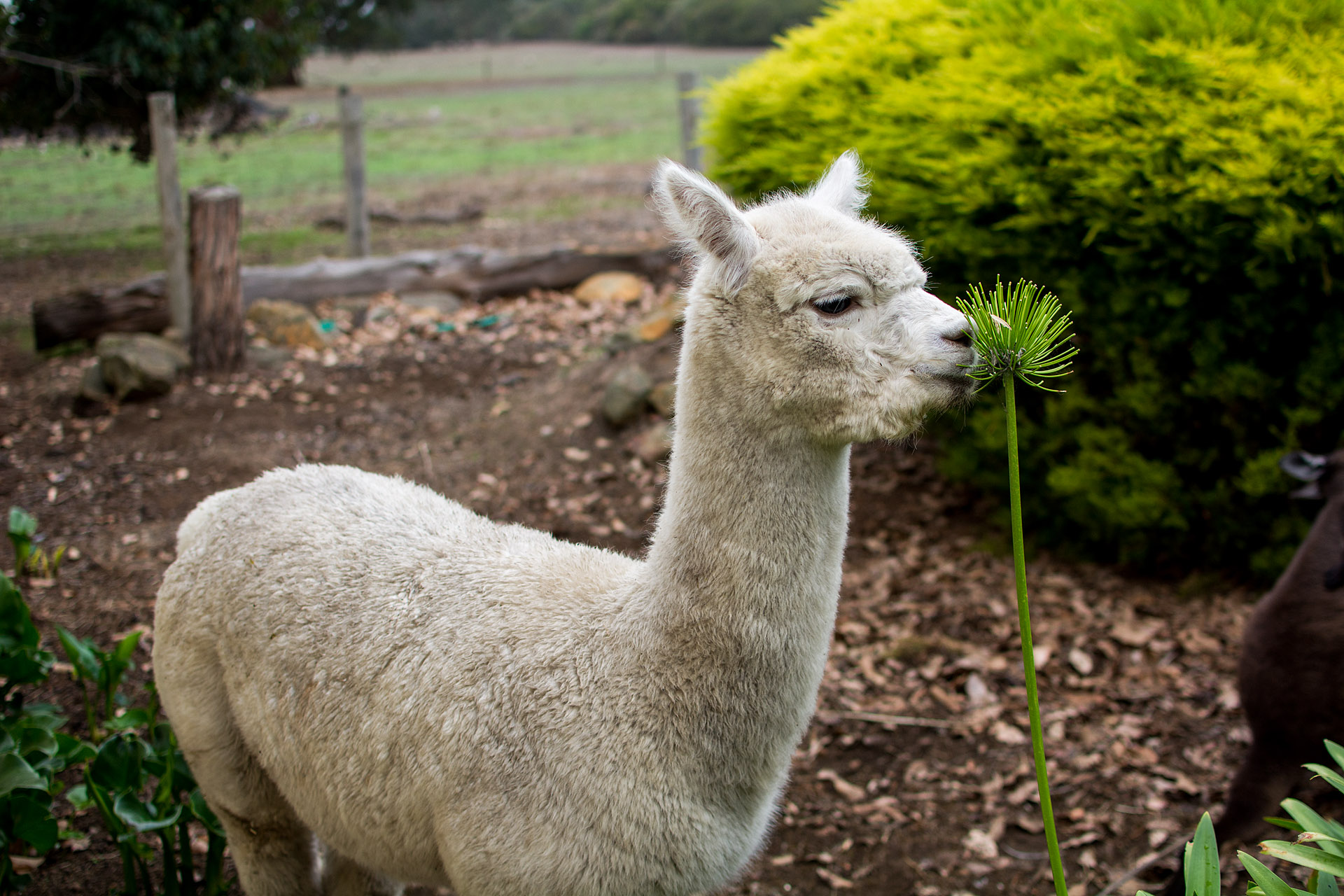 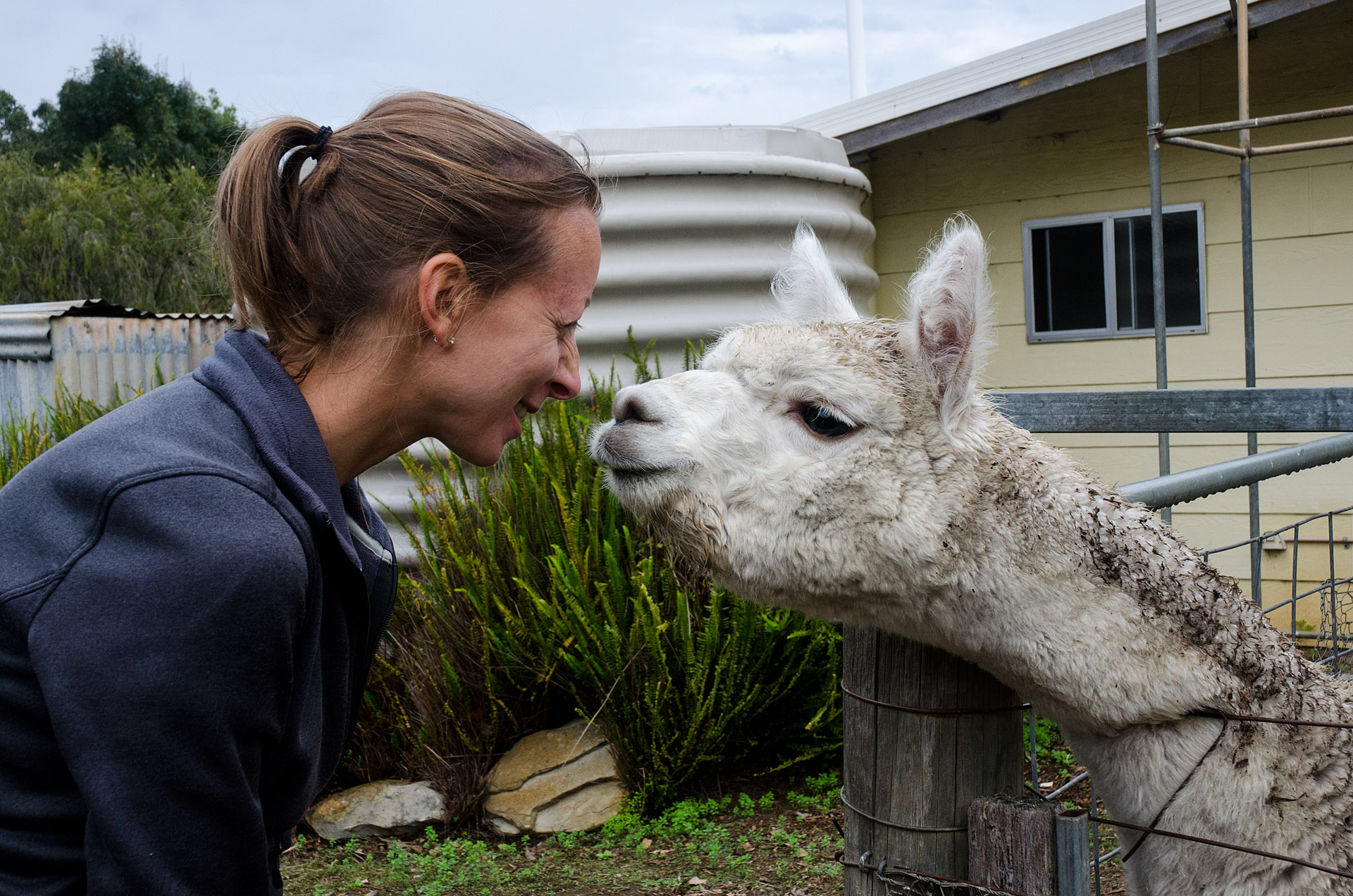 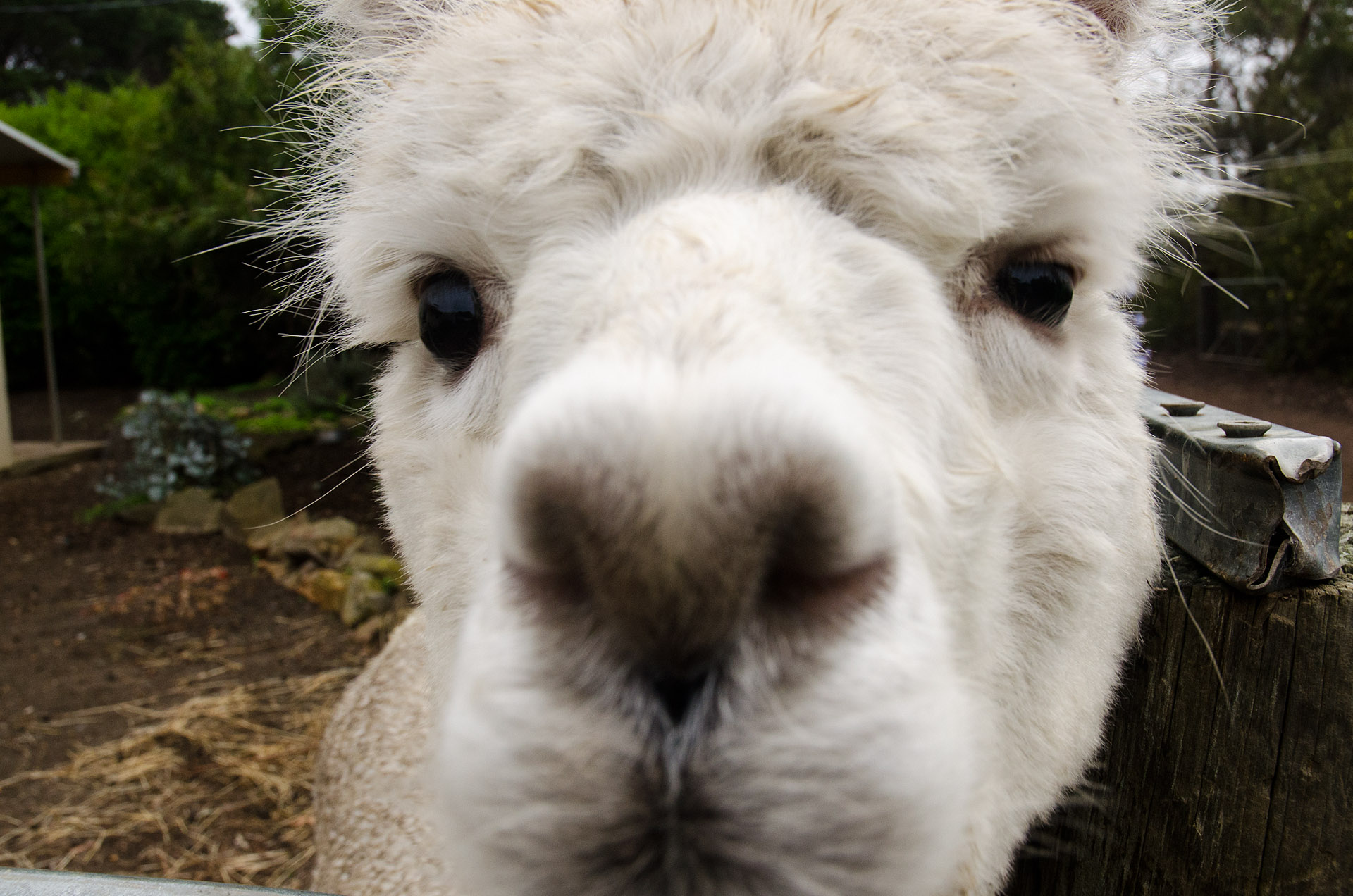 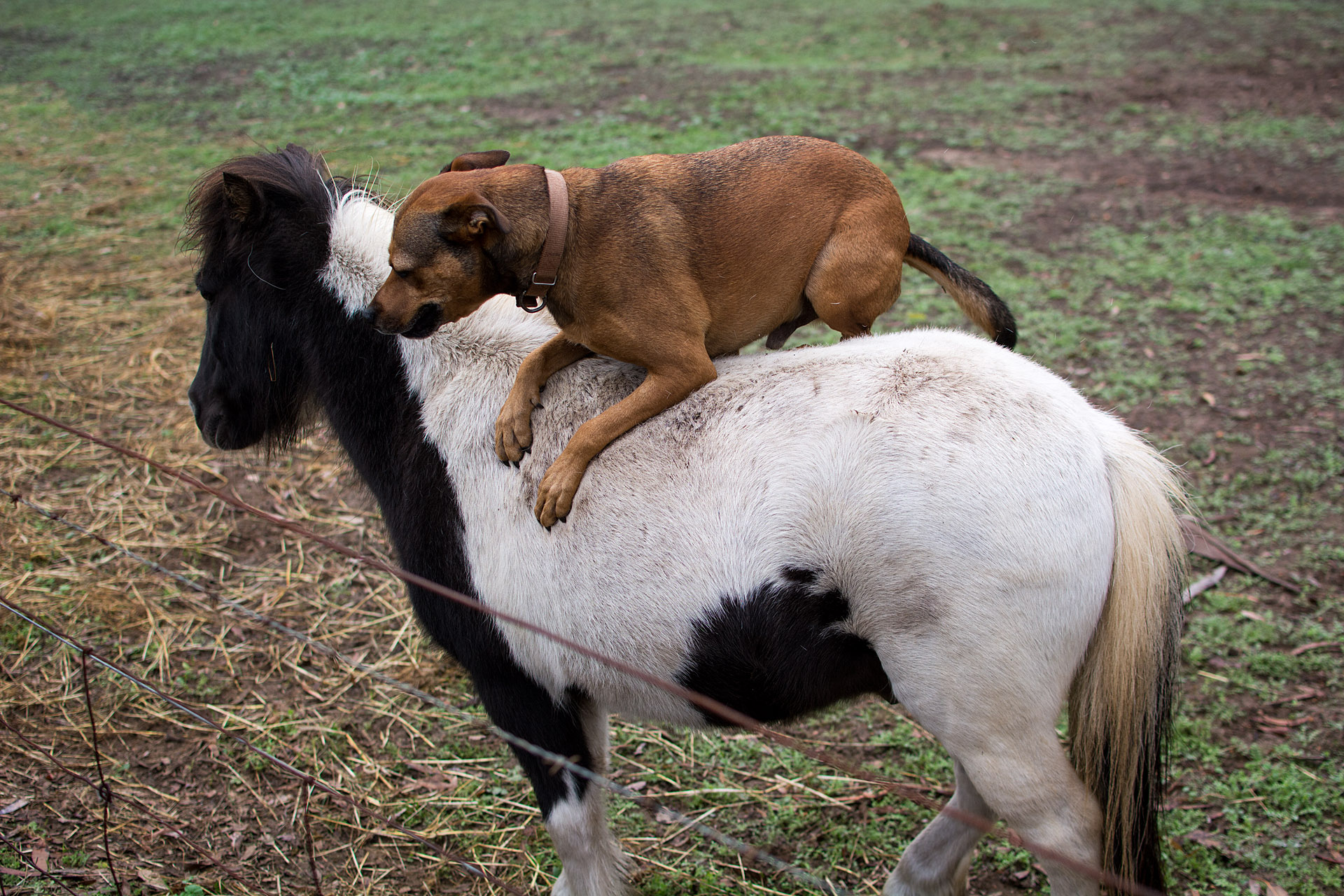 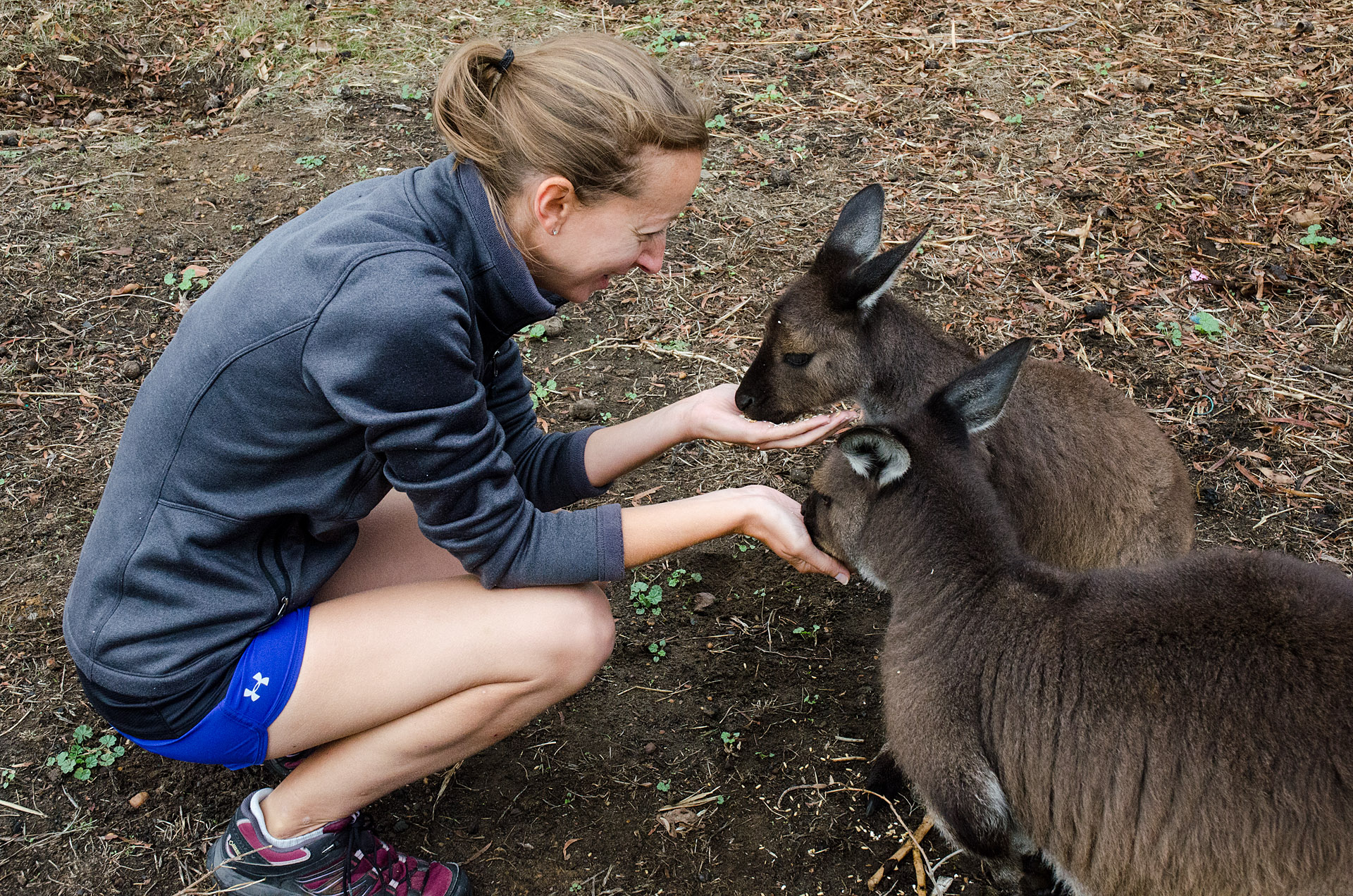 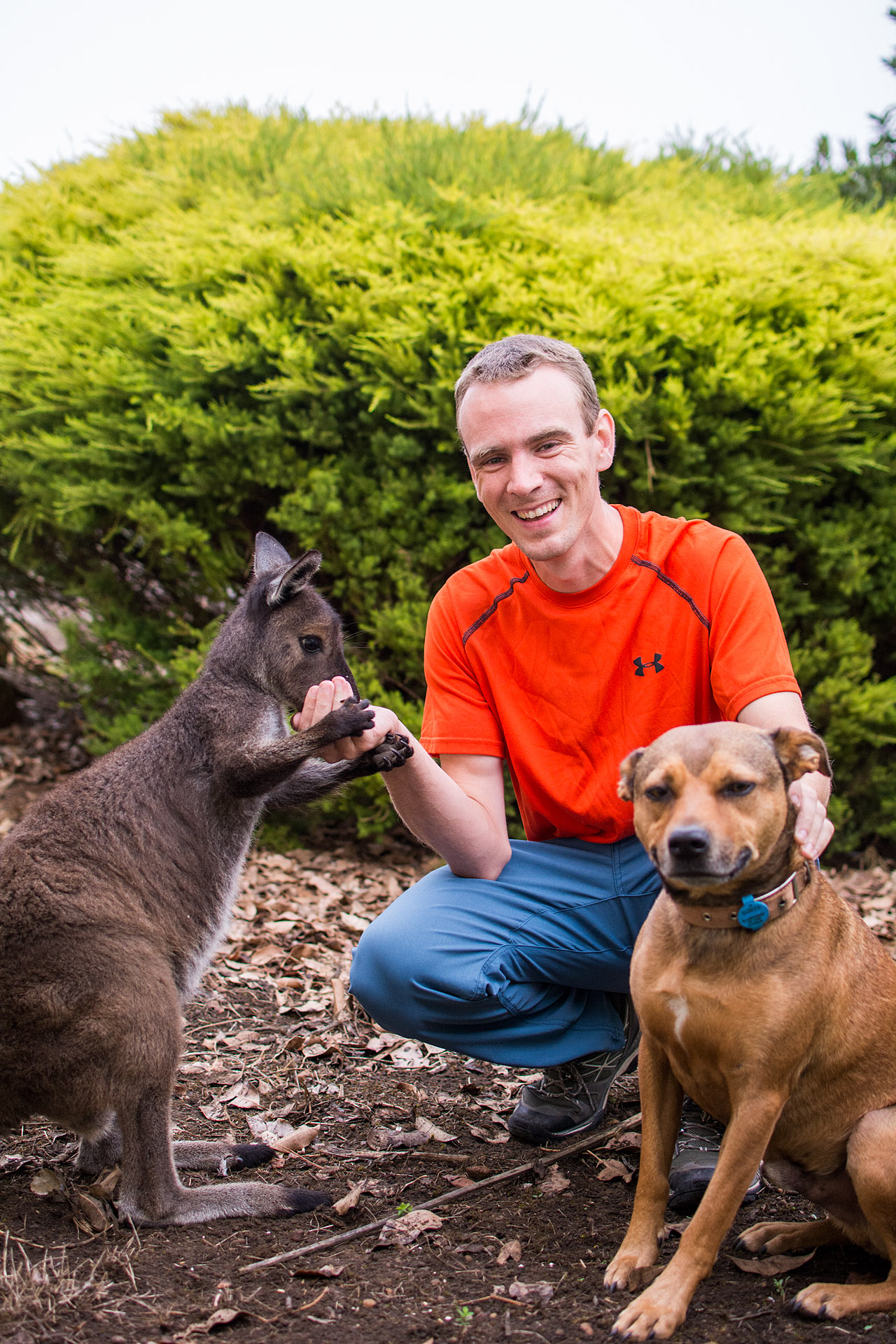 In addition to this litany of loveable pals, there was another special friend with whom I spent a great deal of time – Elsa, a 15-month old kangaroo (adopted by Jenny when she was orphaned at only a few months of age). Having been hand-raised by Jenny, Elsa was so sweet and docile but also had such a playful personality. She had a little feisty streak that especially shone through around Buddy – she’d hop around erratically and try to box with him as he raced around her, tail wagging wildly. Each morning we’d get up to give Elsa some breakfast, and we’d typically find her waiting patiently at the door for us. She enjoyed having her back scratched after a morning snack, and it would often trigger her short forearm to wave involuntarily, just like a dog’s leg during a belly rub. I dearly treasured each morning I had bonding with little Elsa, and could have stayed at Blue Hills forever with her and the rest of the furry crew. 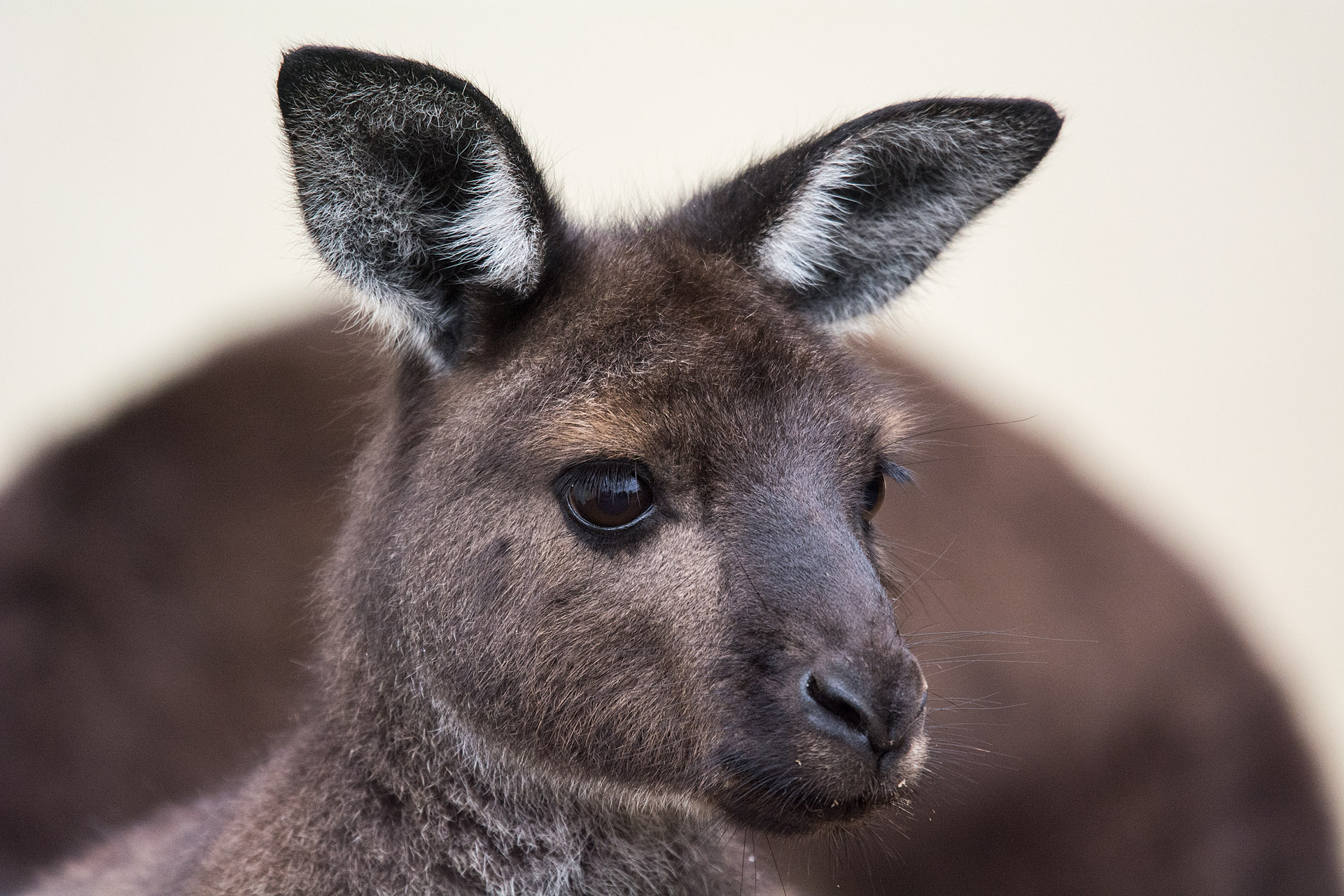 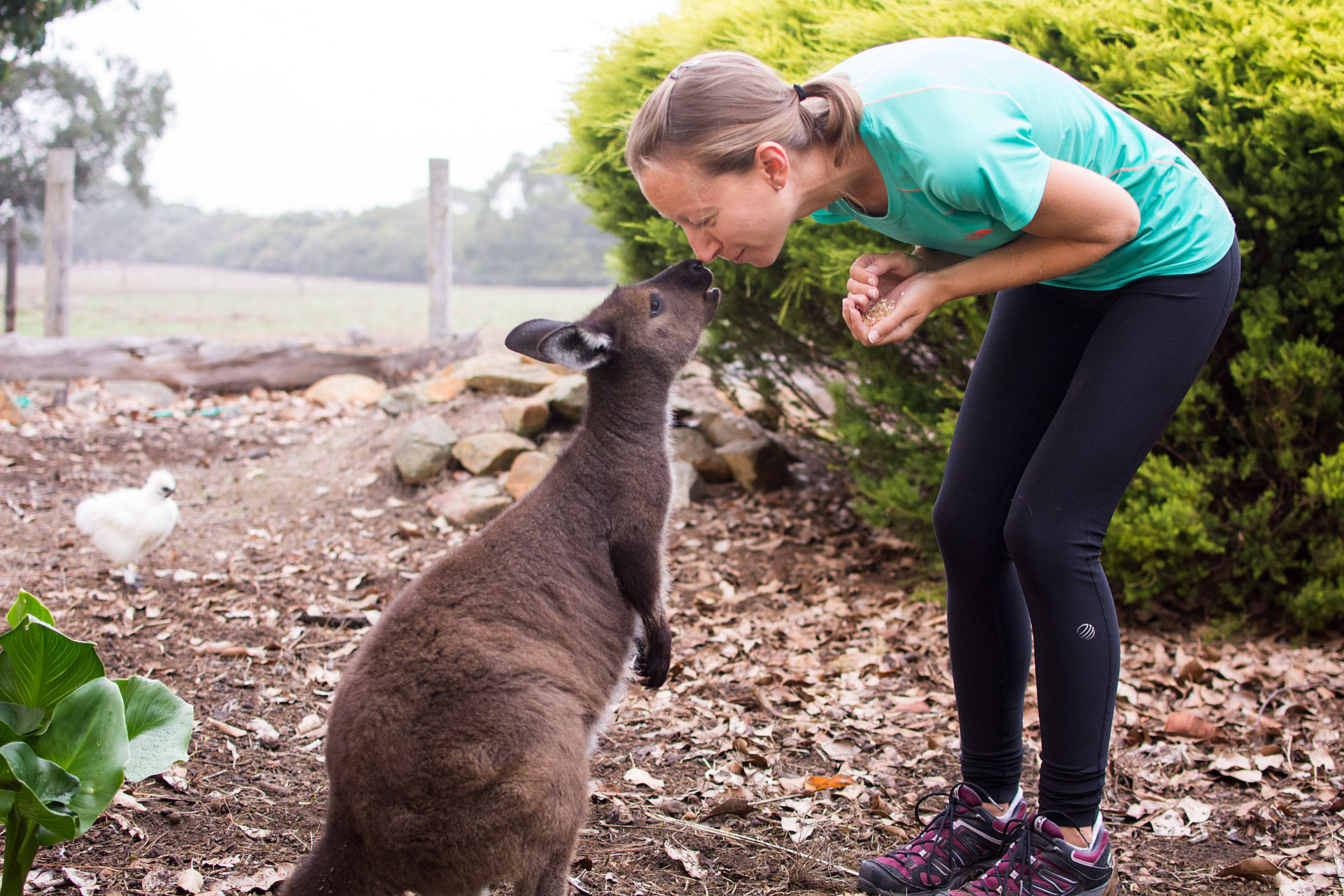 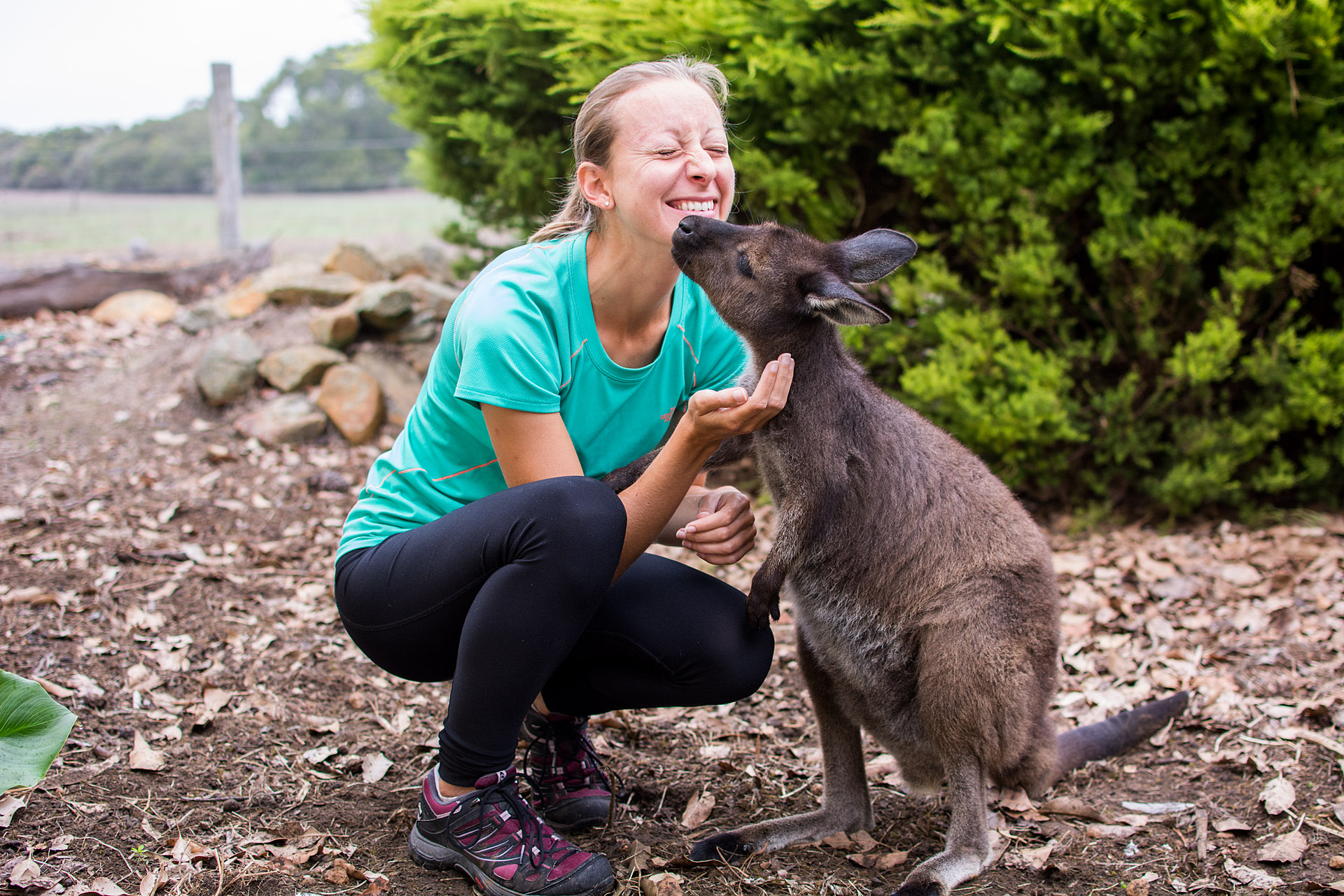 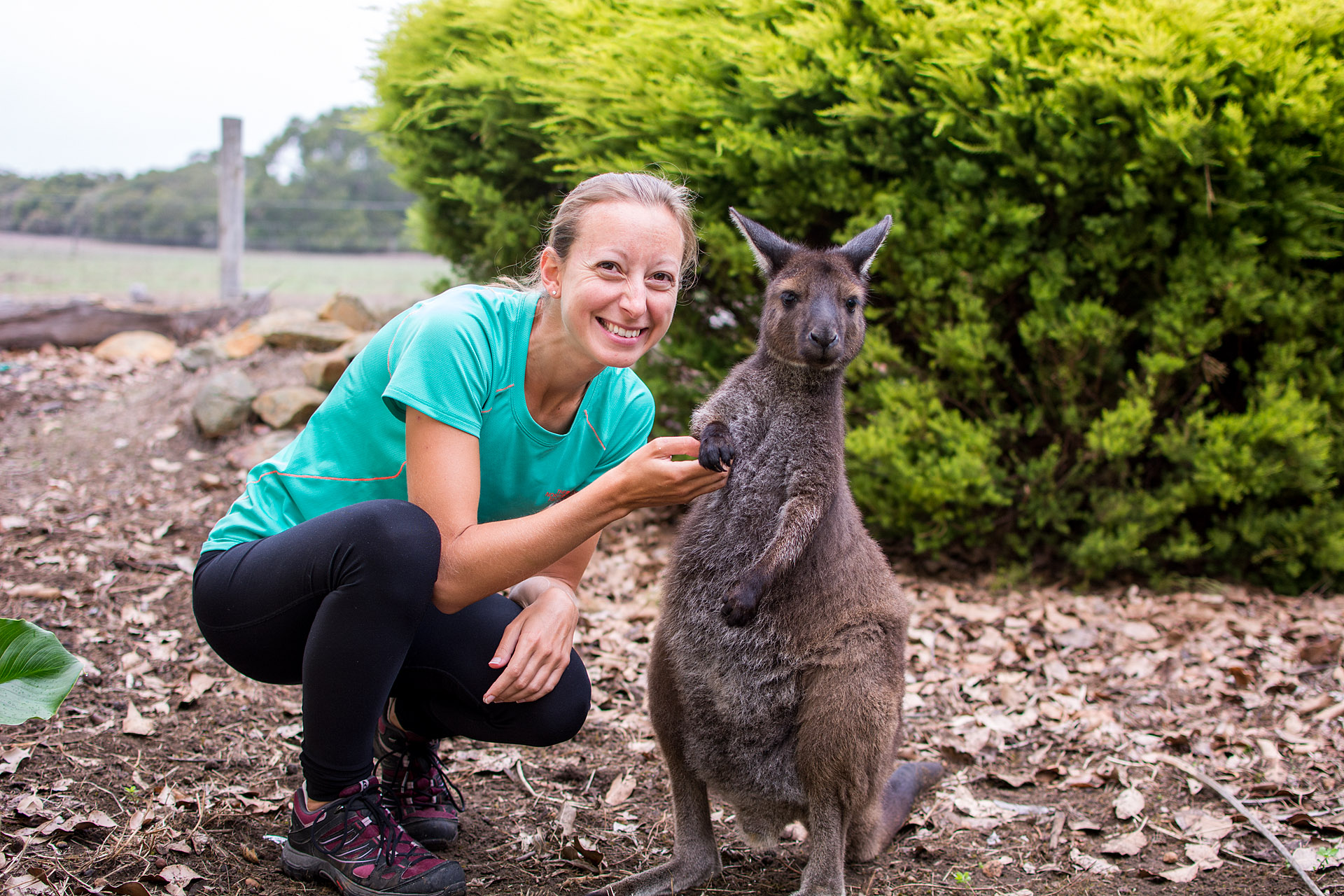 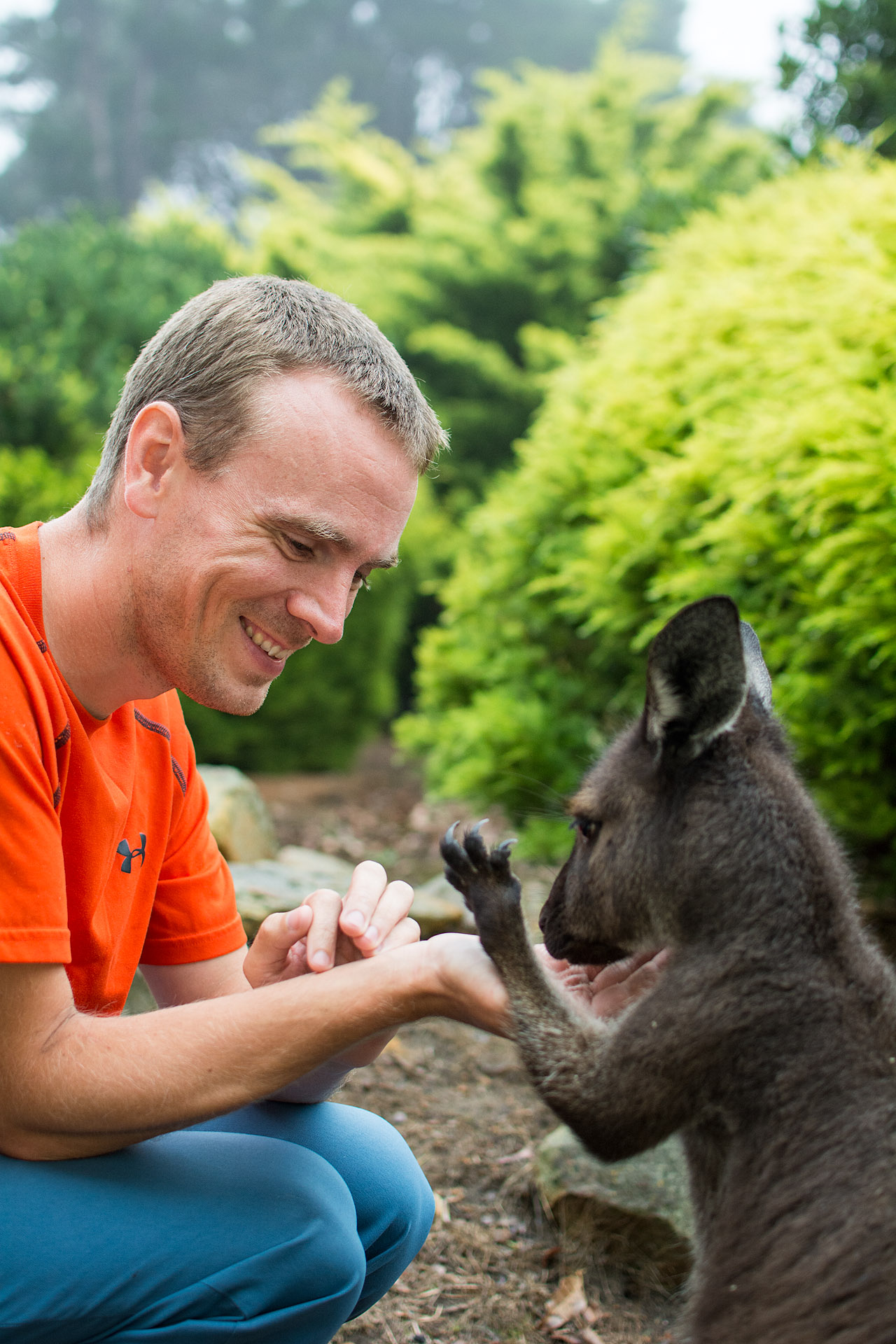 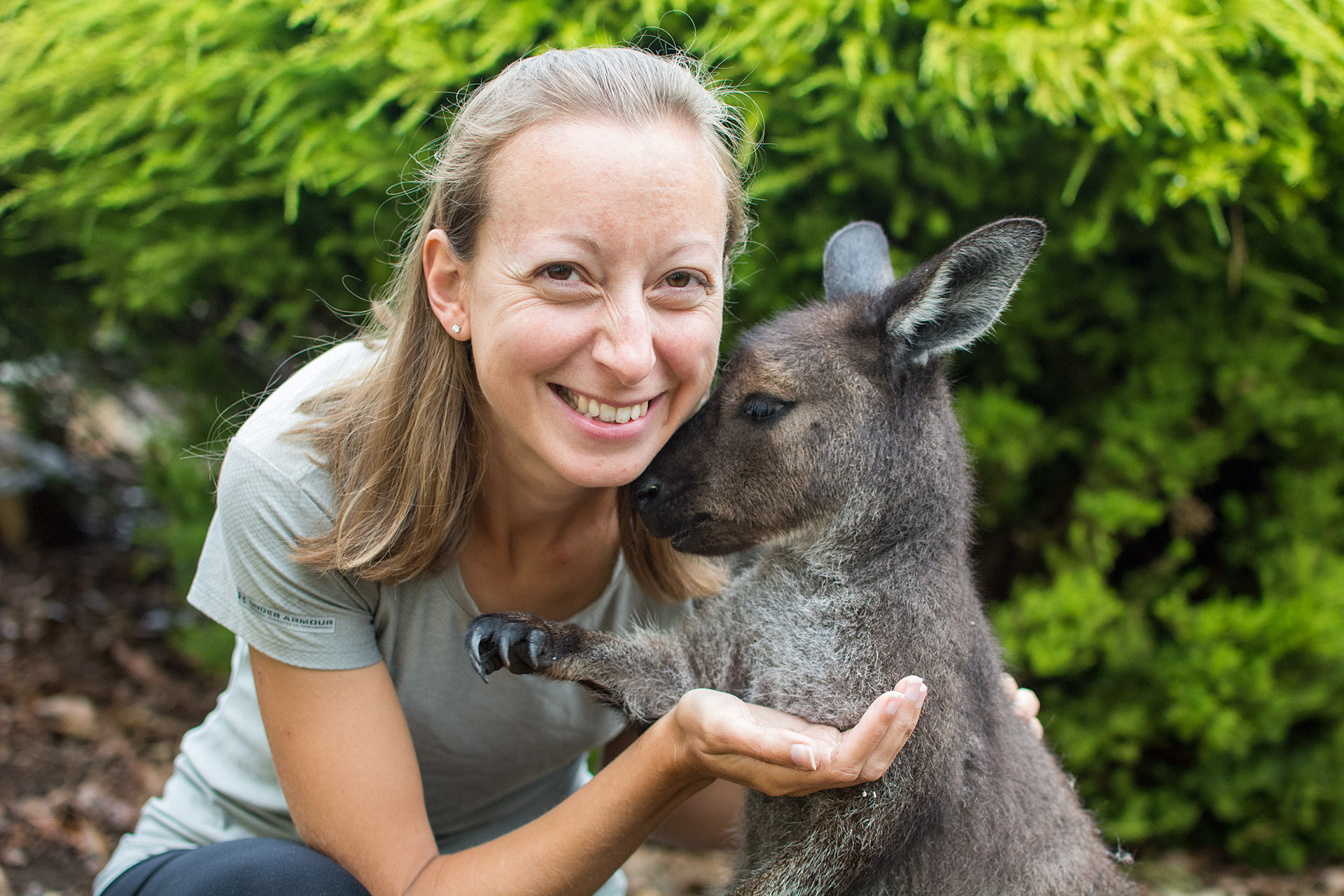 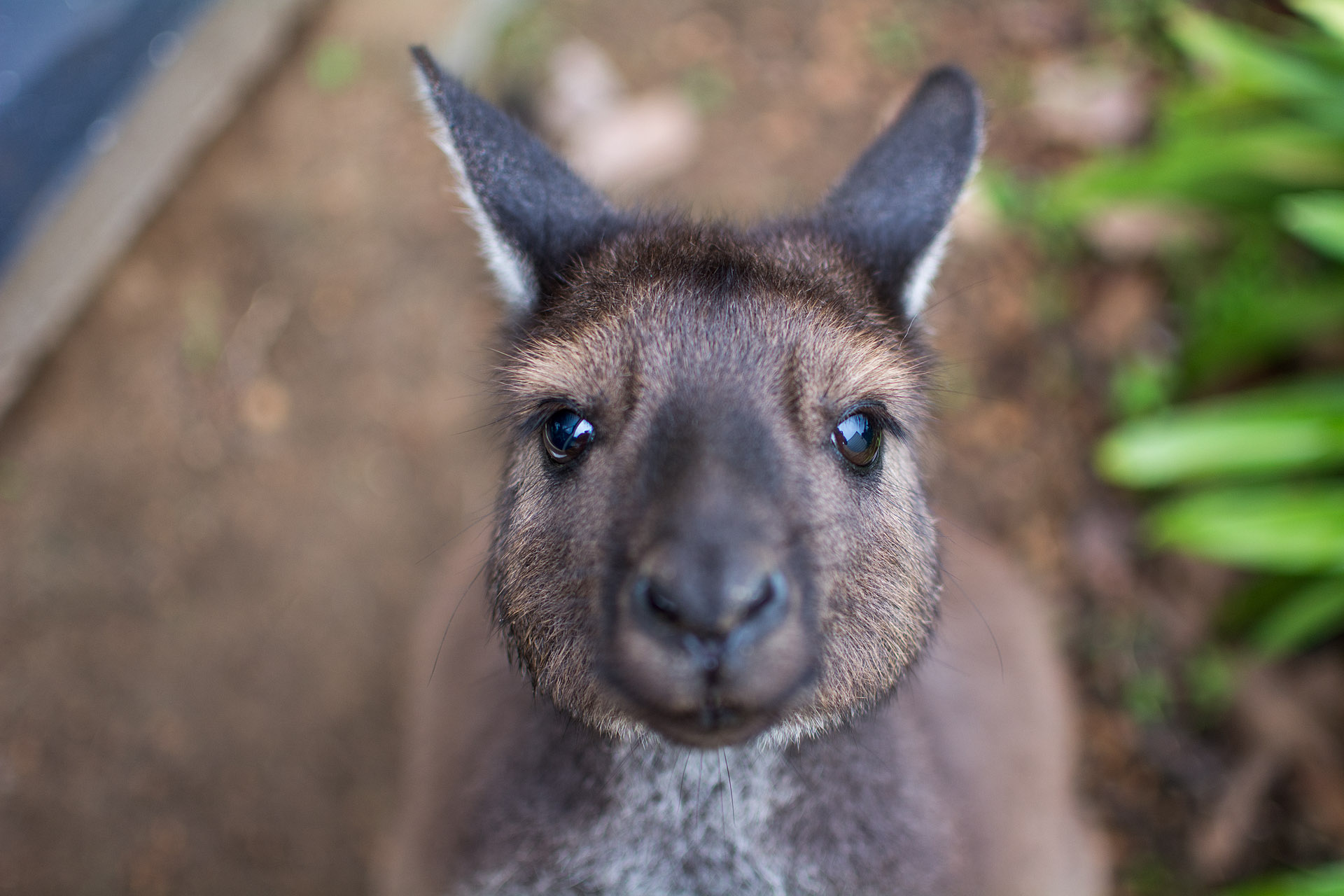