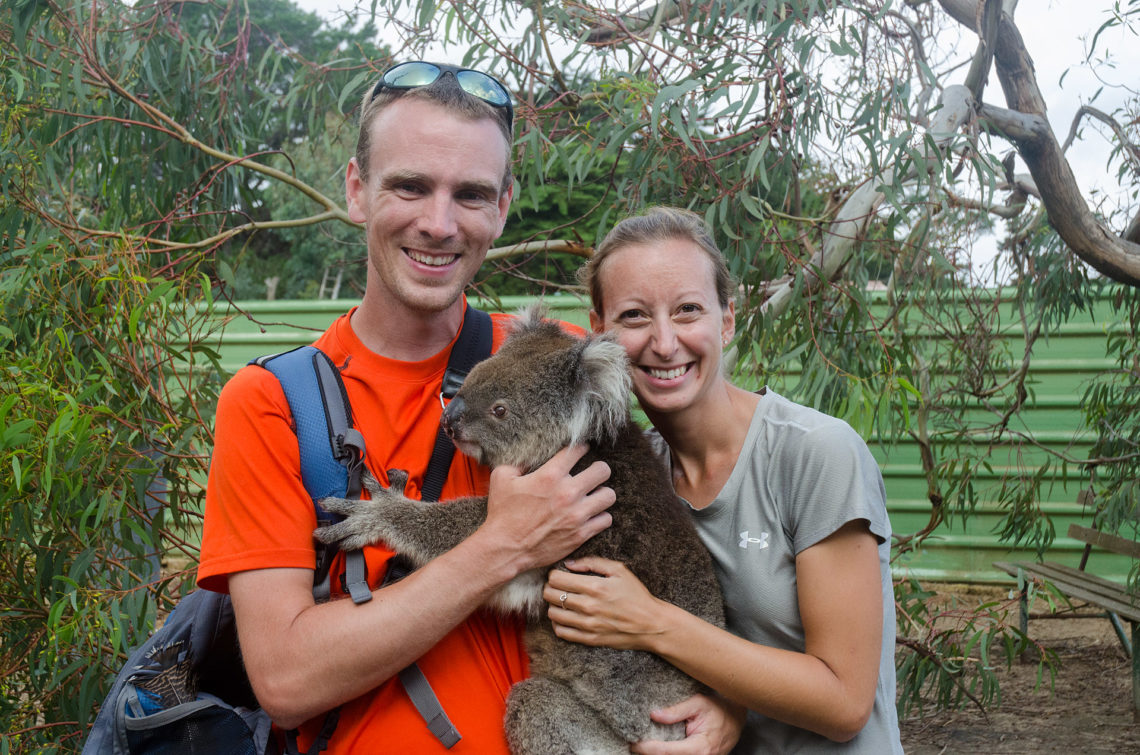 Located on Kangaroo Island’s Stokes Bay, Paul’s Place is a sprawling, 1200-acre farmstead of rolling green pastures, vegetable gardens and paddocks. When you pull up to the home, you begin to notice that this isn’t an ordinary farm, as five large emus trot up to the car to greet you and several peacocks strut by. A number of well-groomed and well-fed horses stand around in a nearby field eating mouthfuls of grass, and it might not be until the second glance that you notice the distinctly-dromedarian hump on one of them. Once you walk through the gate and a dozen kangaroos begin hopping over to say hello, you’ll know this is a unique place. 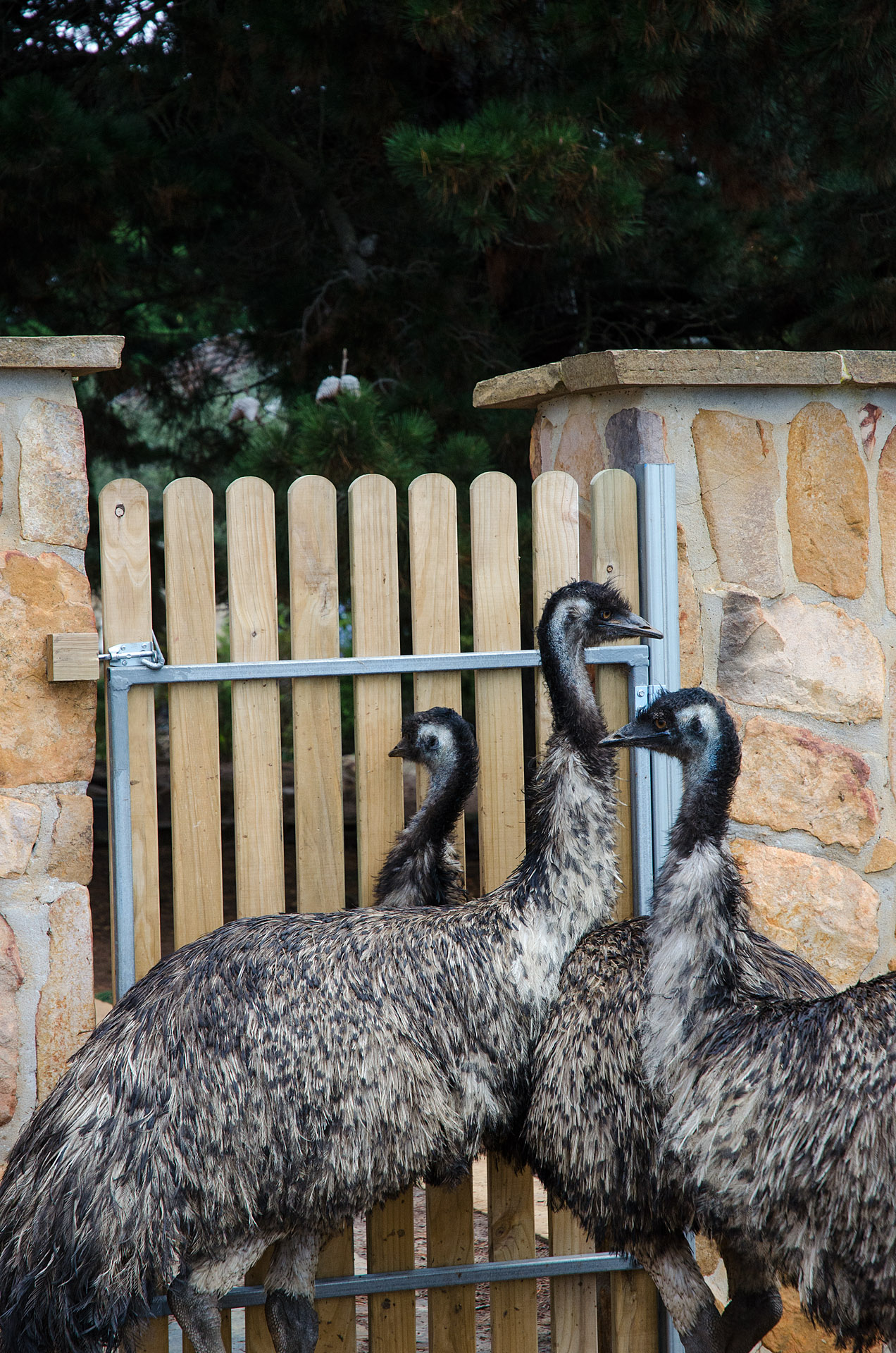 Paul’s Place is a haven. A retirement home. A place where the injured, orphaned, abandoned or neglected can be lovingly attended to by Paul, his family and his guests for the rest of their days. Paul was born on the farm, and has been rescuing animals since he was five. Now, he takes in native orphans, rescues exotic animals from owners who got in over their heads, and treats and shelters injured locals (animals, not people). They rehabilitate and release where possible, re-home when they can, but most who come are there for the long haul. Recently, Paul’s wife and kids went to a livestock auction and purchased half a dozen horses, several of whom were clearly abused, and brought them to live in their tranquil corner of the island. The two most neglected and abused horses were given special pastures, lots of love, and have already regained enough trust to enjoy a carrot and a scratch behind the ears.

Despite what must be an enormous food bill, he has only ever taken a few small groups a week through his farm – even less now, since the government reclassified their insurance requirements. Paul says the insurance would only be affordable if they turned the farm into a full-blown zoo, which is not the way he wants his animals to be treated. Consequently, the only way to see this amazing place is to email them and try to arrange a visit – now free of charge, though you can leave a donation for the animals. Back when Jenn first discovered the farm, we had hoped to volunteer there for several weeks. The side effect of running such a wonderful place, though, is the volunteers never want to leave – meaning that, even though we had been in touch with them for over a year, they had no extra space for the two of us. They did, however, arrange a small tour for us and a couple others to see the farm. With a razor sharp wit, and an exaggerated air of exasperation with his ever-growing menagerie, Paul brought us around and introduced us to many of his furred, scaled and feathered friends. 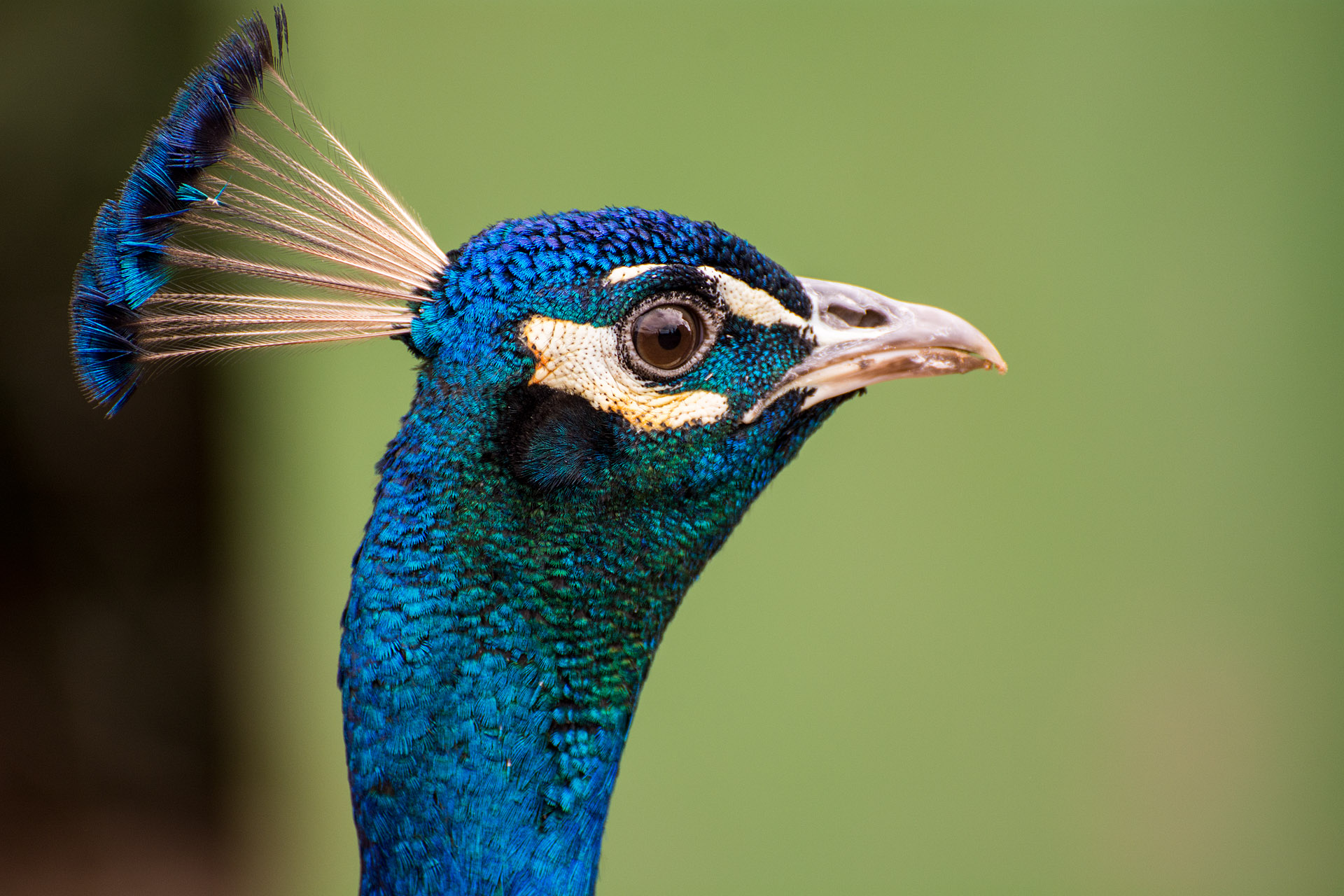 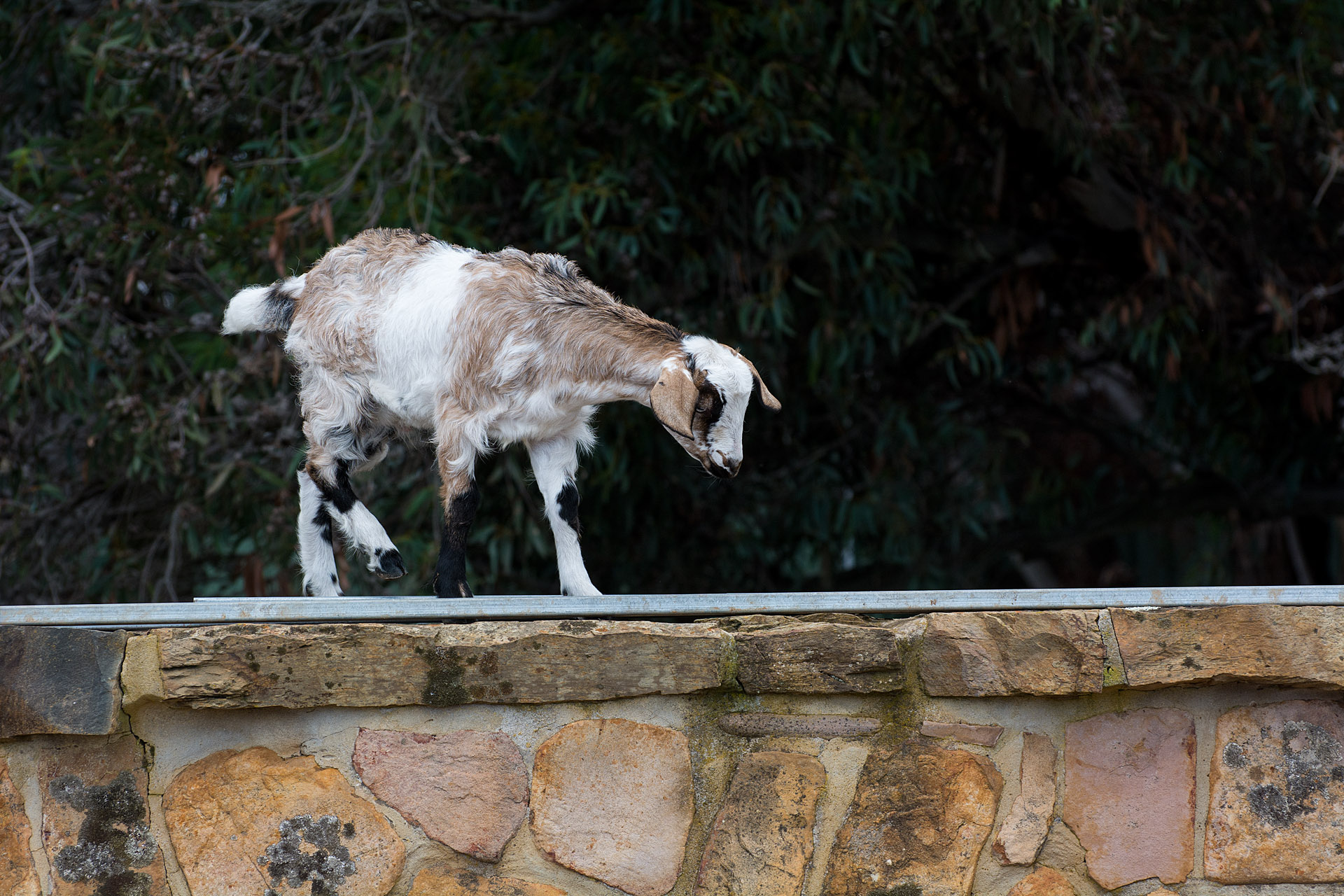 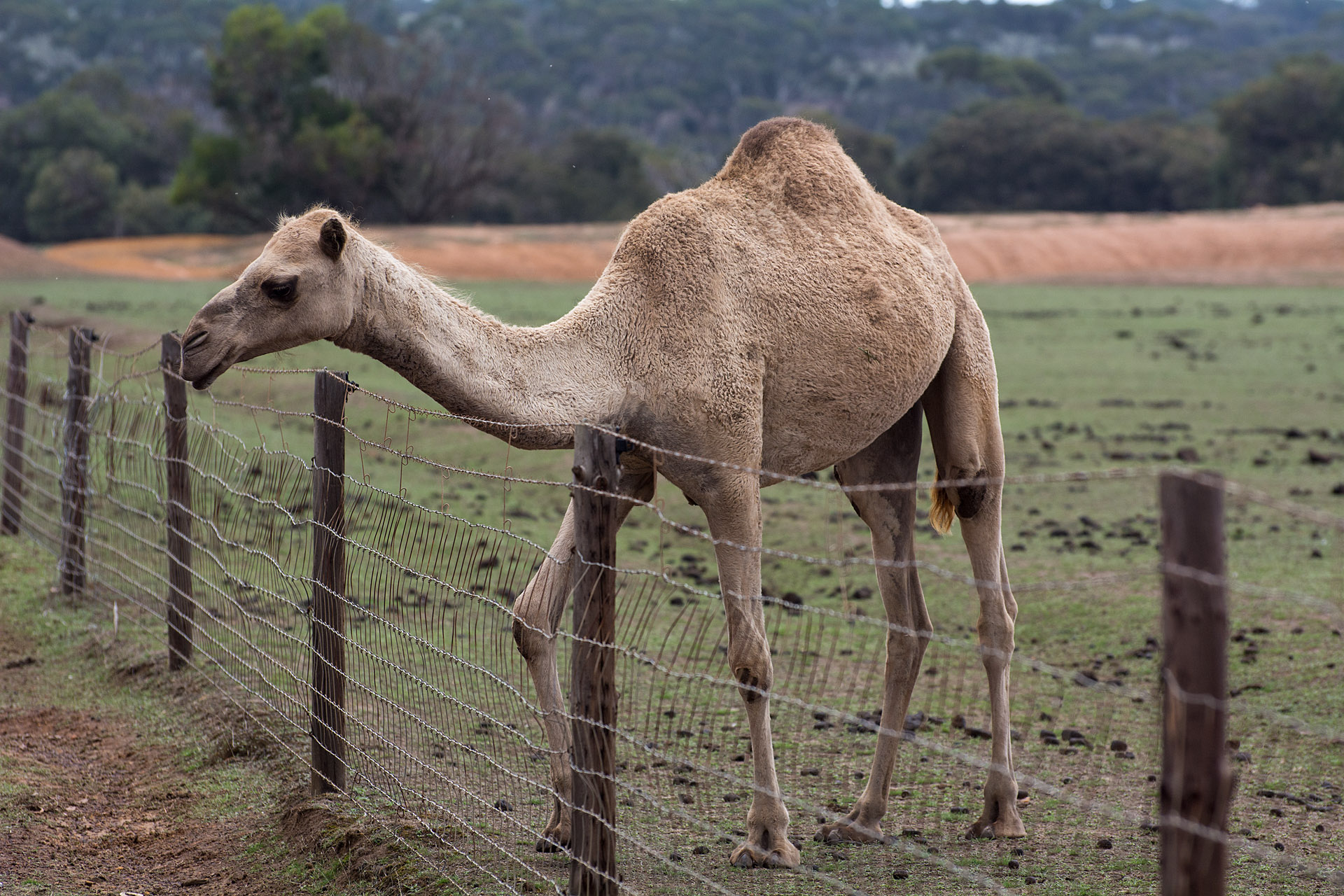 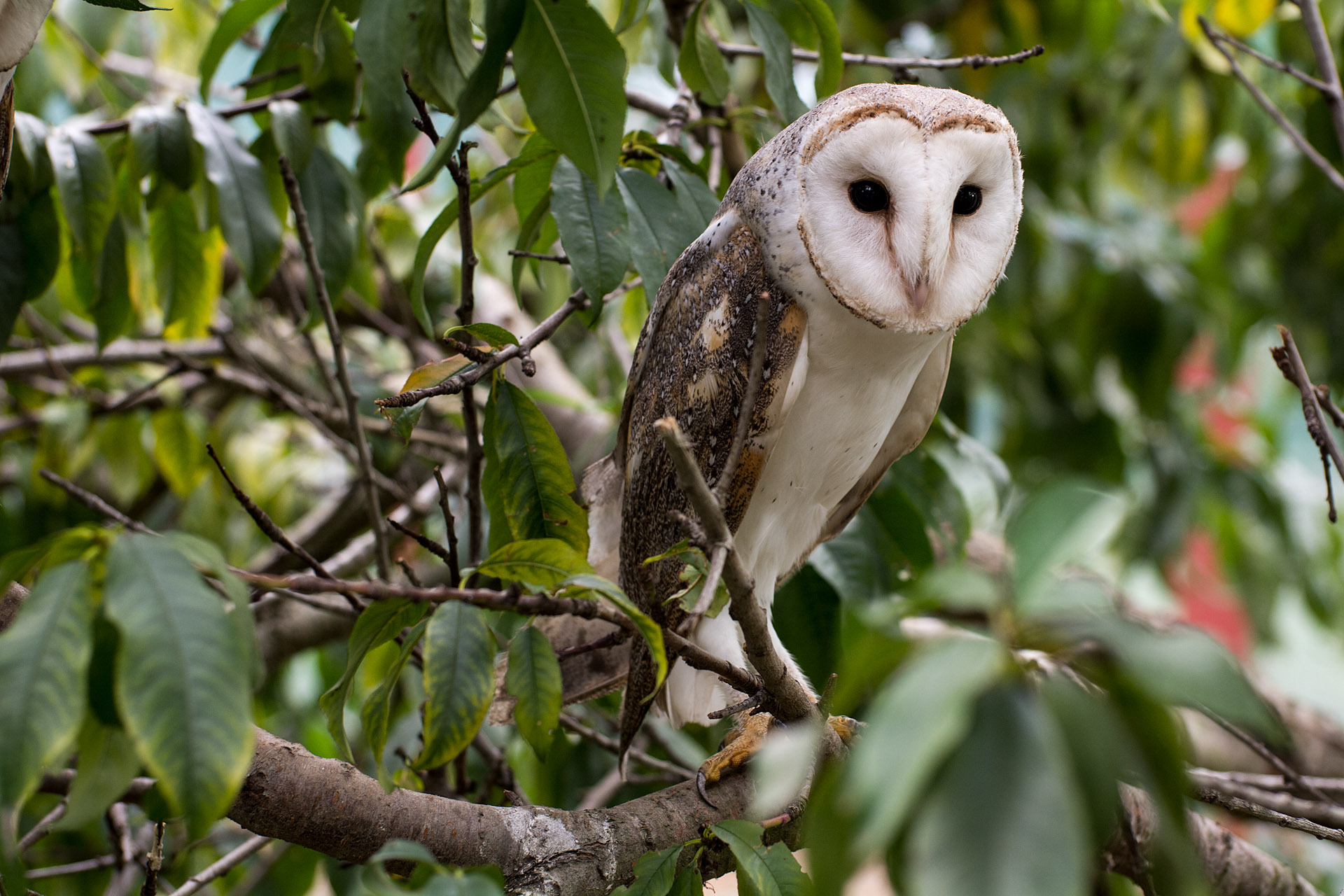 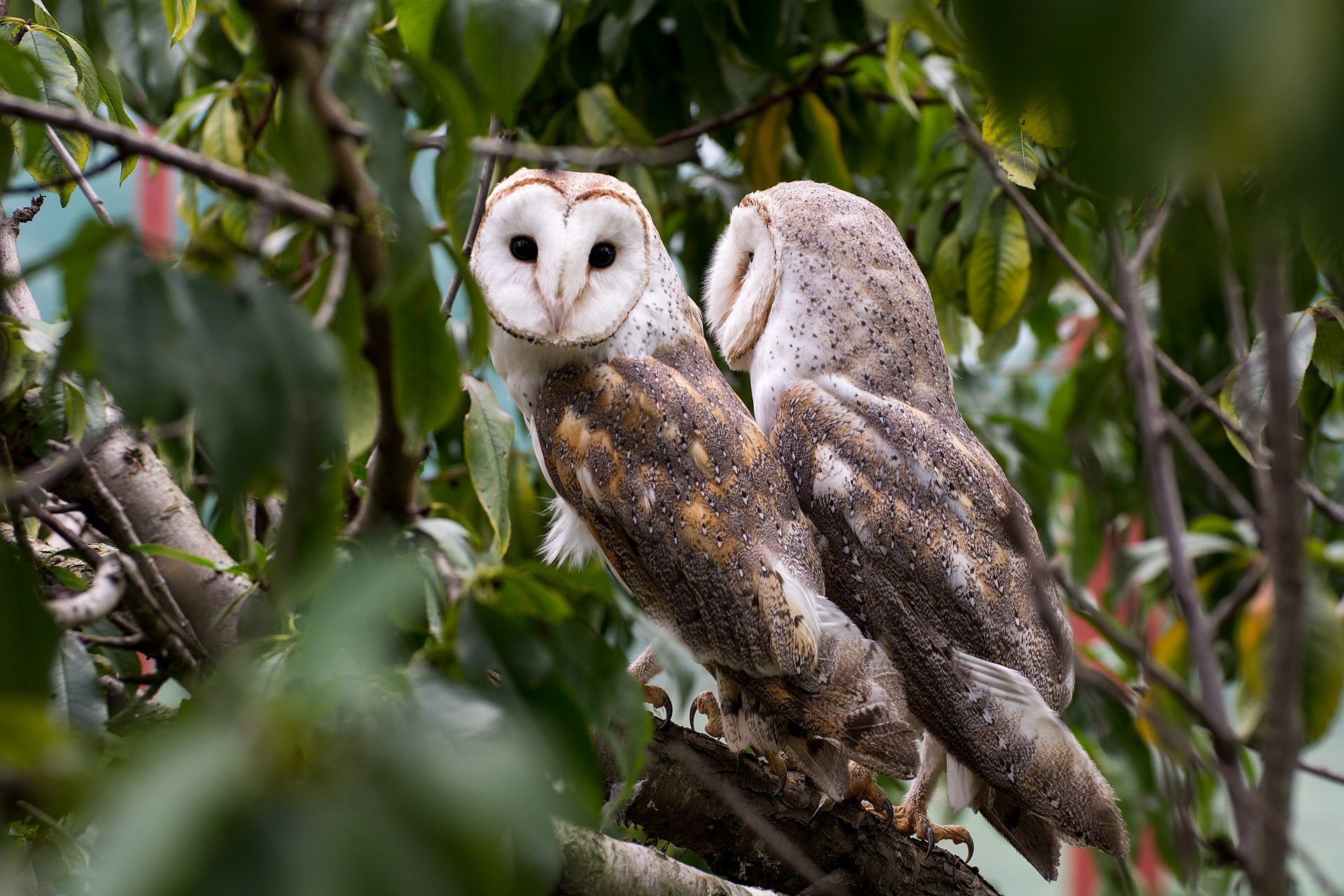 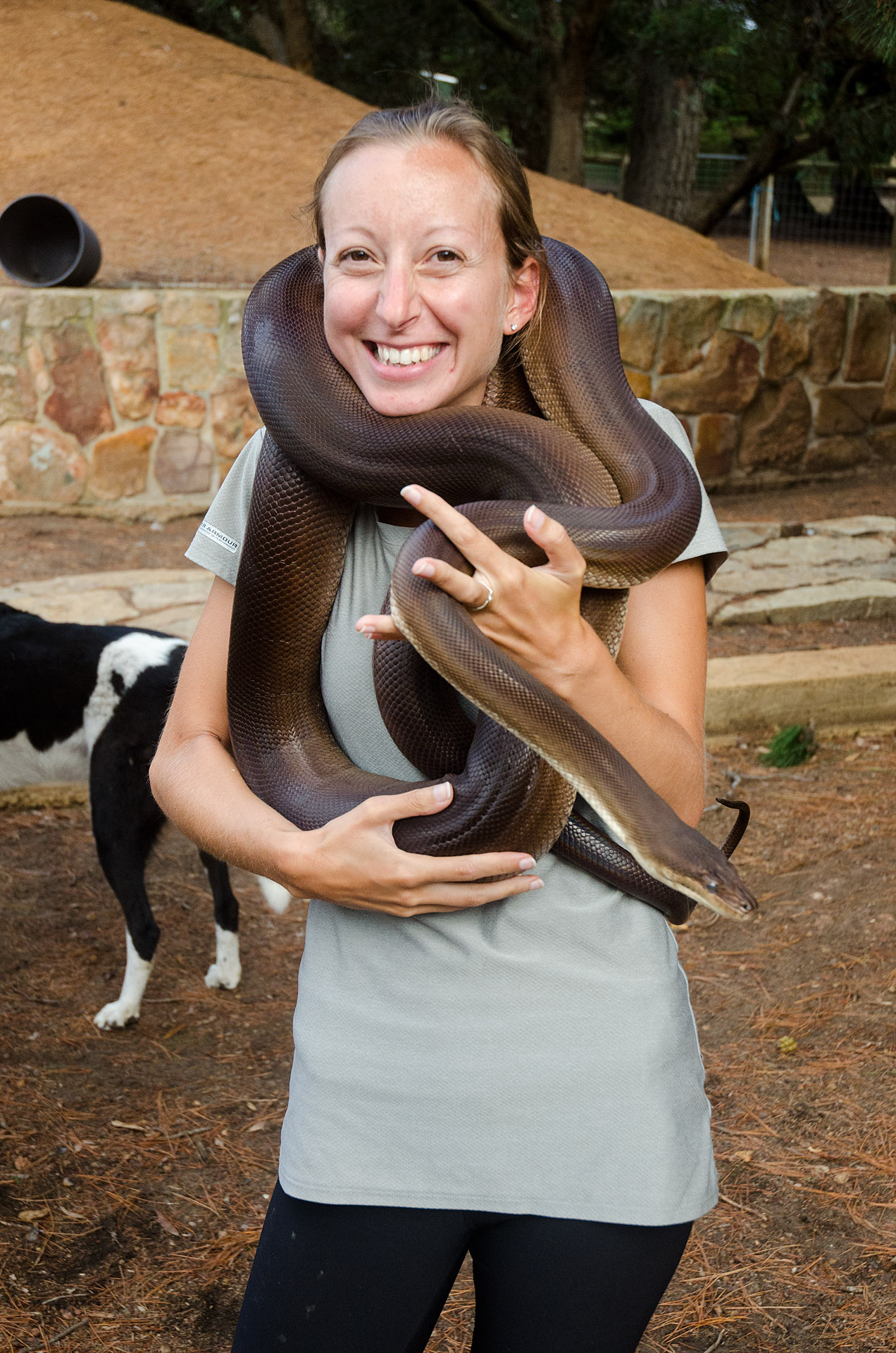 The barely-controlled chaos of the general feeding area is a spectacle that is not easily forgotten. Kangaroos look up pleadingly with their big eyes, begging for a handful of oats, while the emus reach in with long necks to steal mouthfuls. Geese and turkeys thread their way between your legs, cheerfully scooping up what doesn’t make it into the mouths of their taller roommates. Peacocks and ducks watch from the sides, cleaning up when the chaos moves away and leaves behind some tasty morsels. It’s hard to stop laughing long enough to snap a few photos. 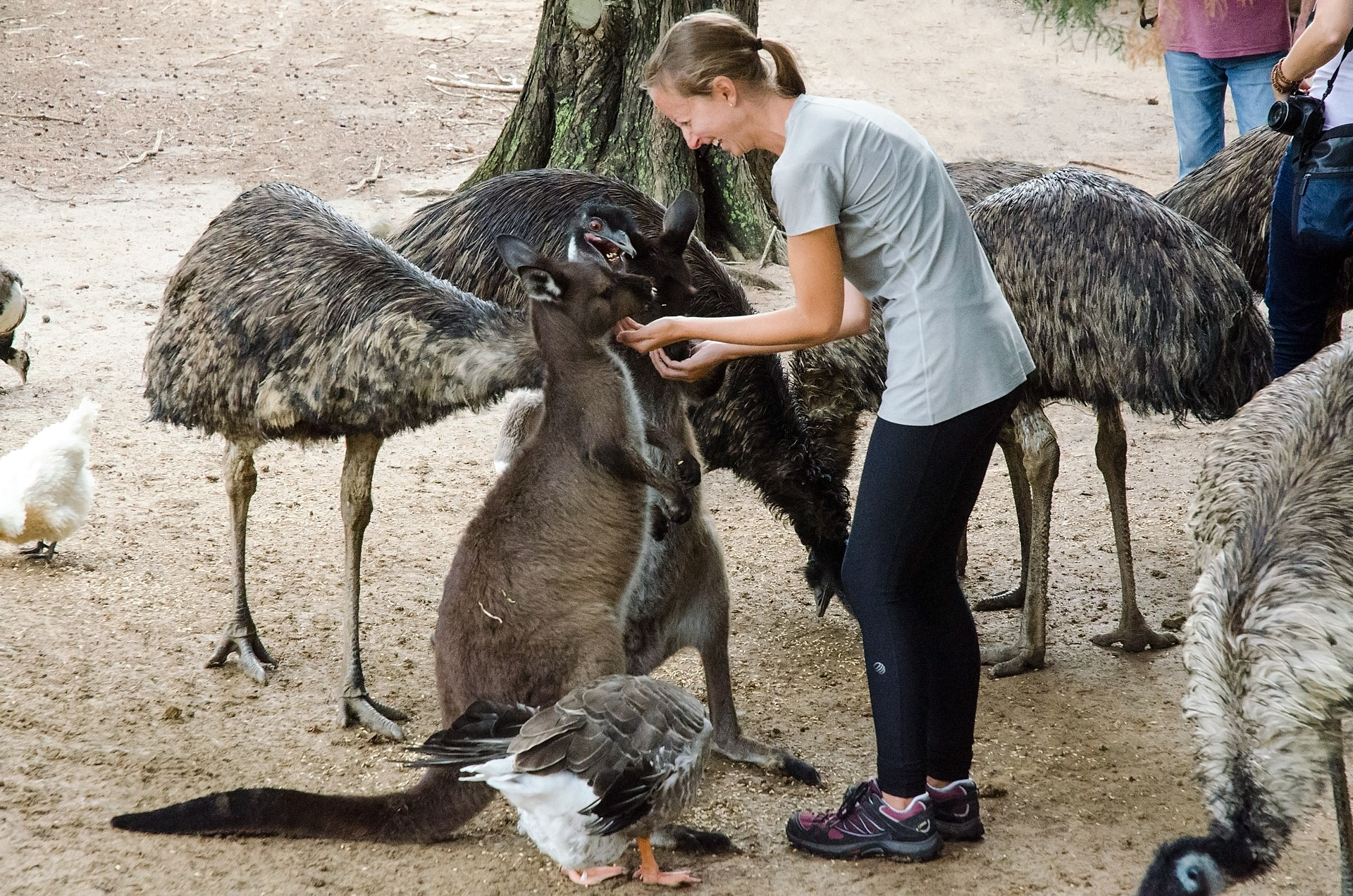 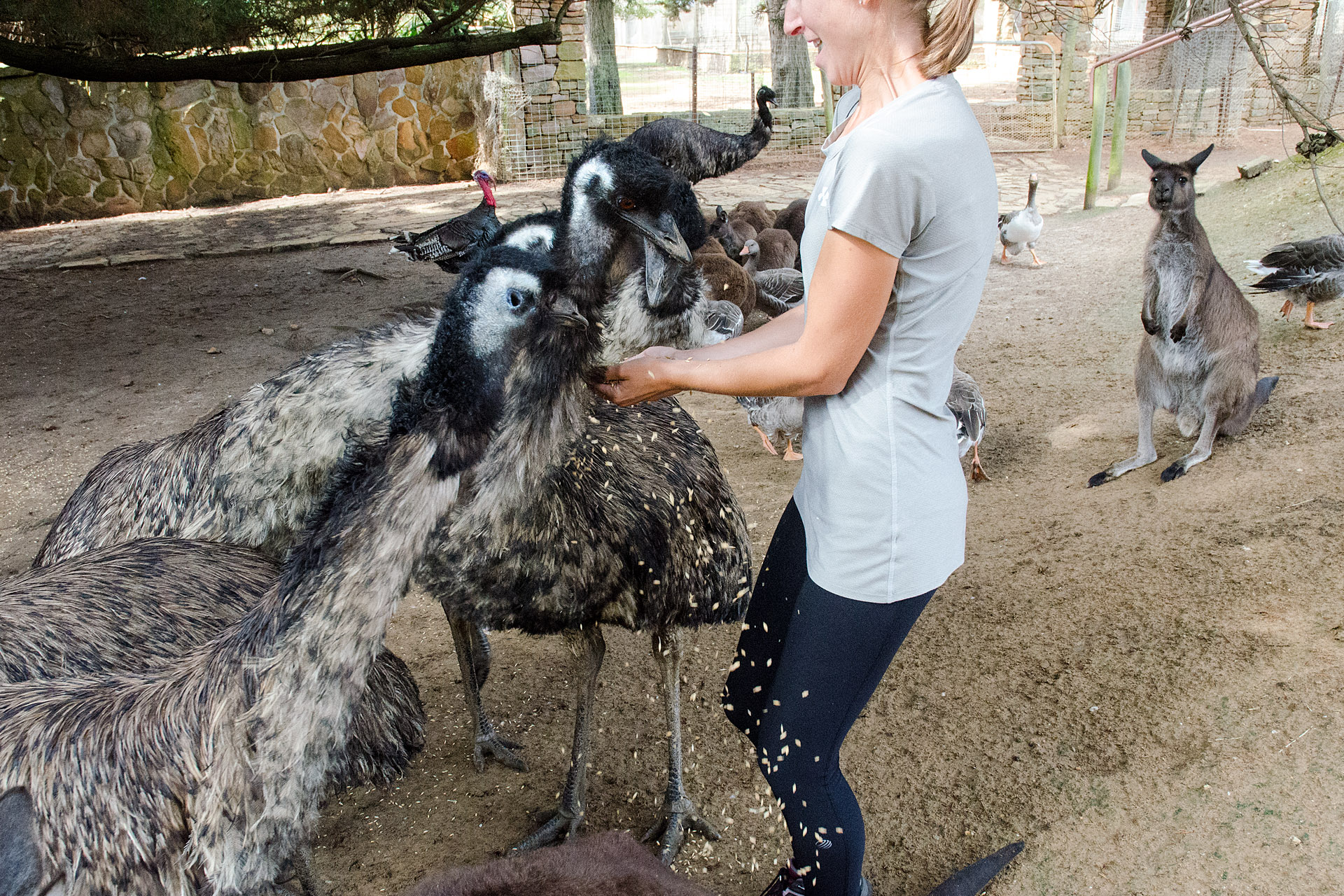 Eventually, we move along to one of the koala enclosures. Paul comes down off a ladder with one of the marsupials draped around his neck, pulls up Jenn’s arm and gently holds the koala next to her. The koala immediately latches on and buries her head in Jenn’s neck, much to Jenn’s delight. “What’s her name?” I ask Paul. “I don’t know, mate. You brought her,” he replies as he turns to Jenn, “what’s your name, sweetie?”

This koala is a hand-raised orphan and is delighted to be cuddled and stroked. As I’m holding her, a woman asks if it’s a male or female. Paul turns and studies the koala and I seriously for a moment. “I’m not sure,” he announces, “with these Americans, it’s pretty hard to tell.” 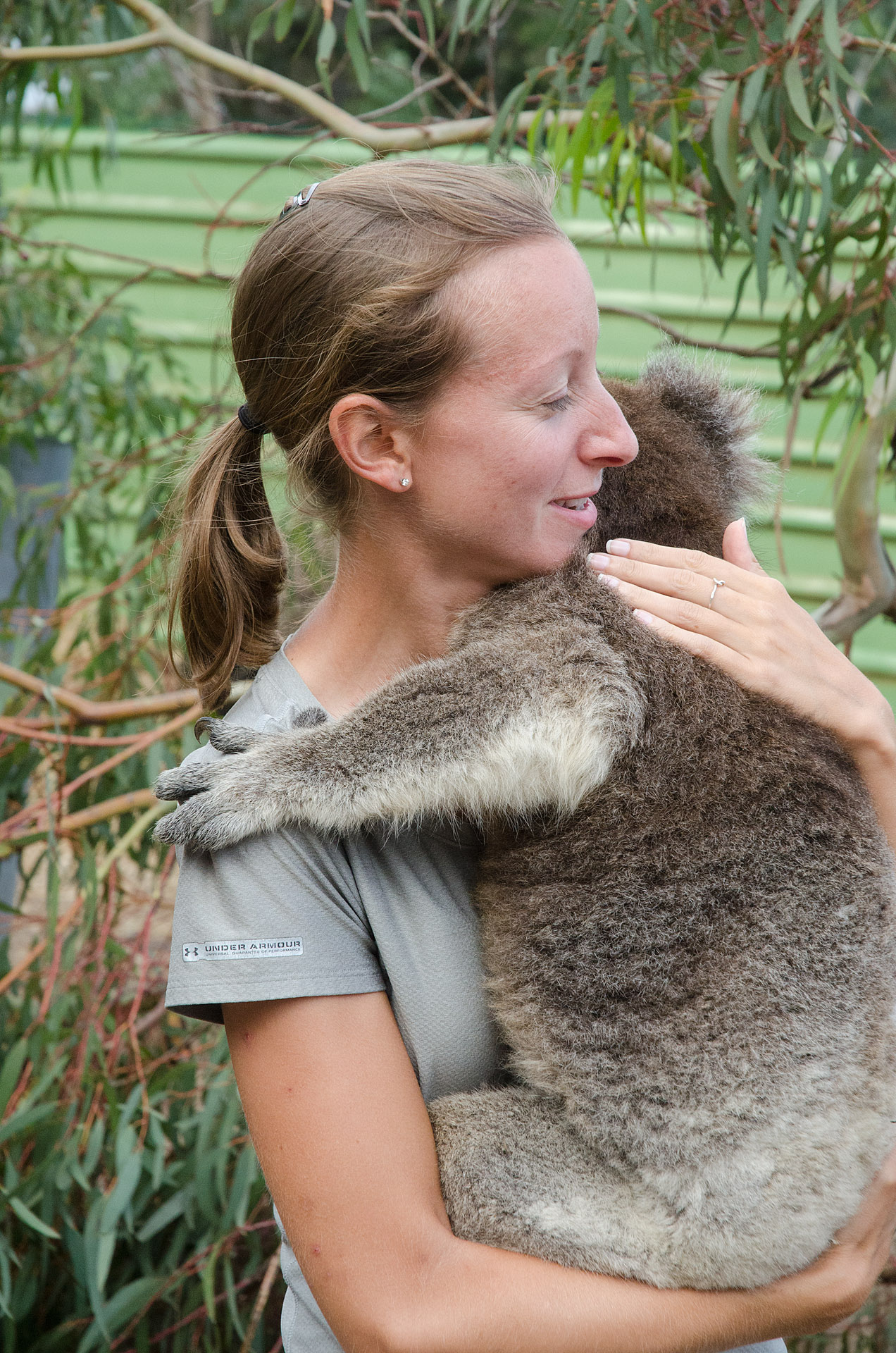 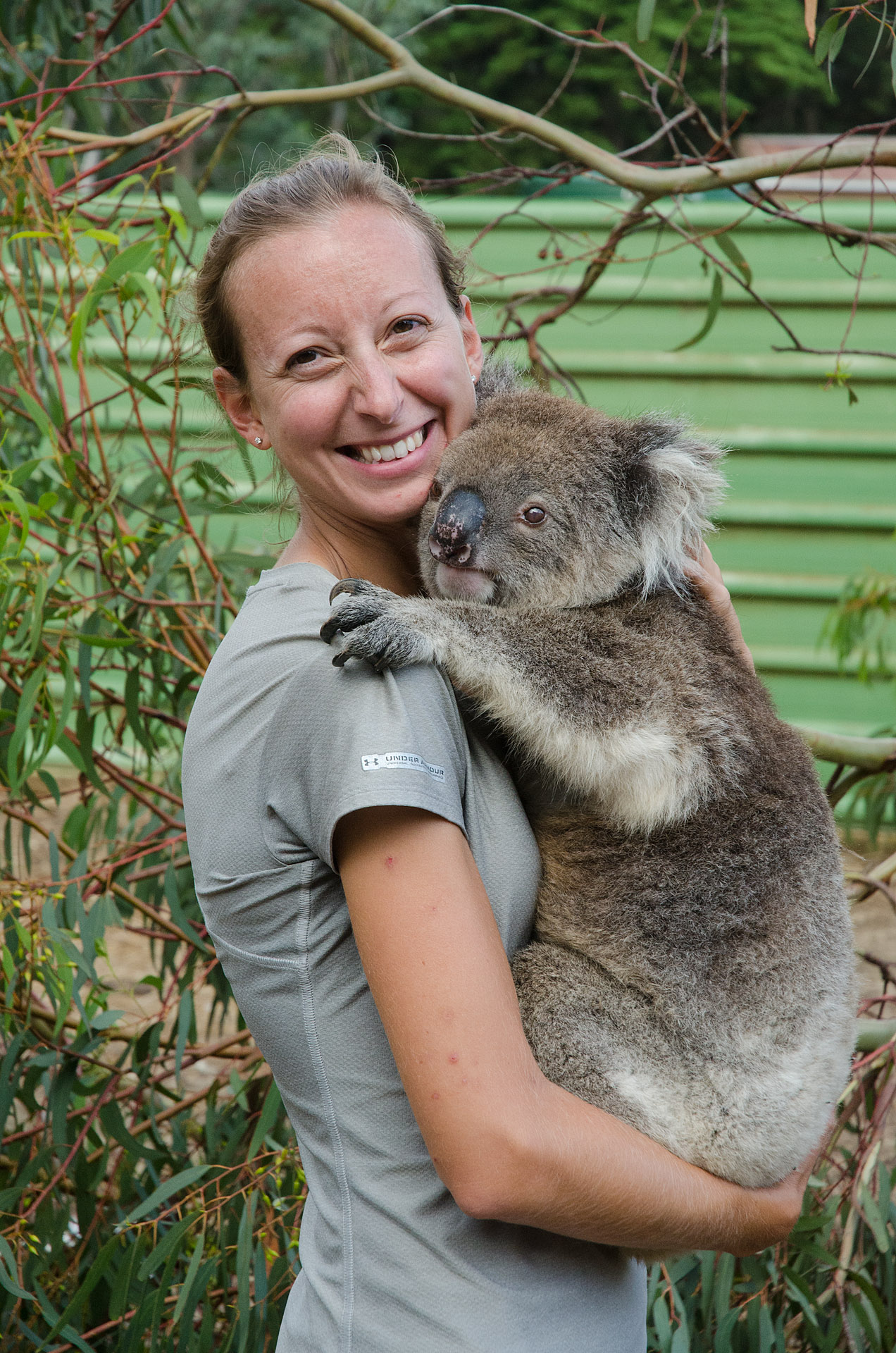 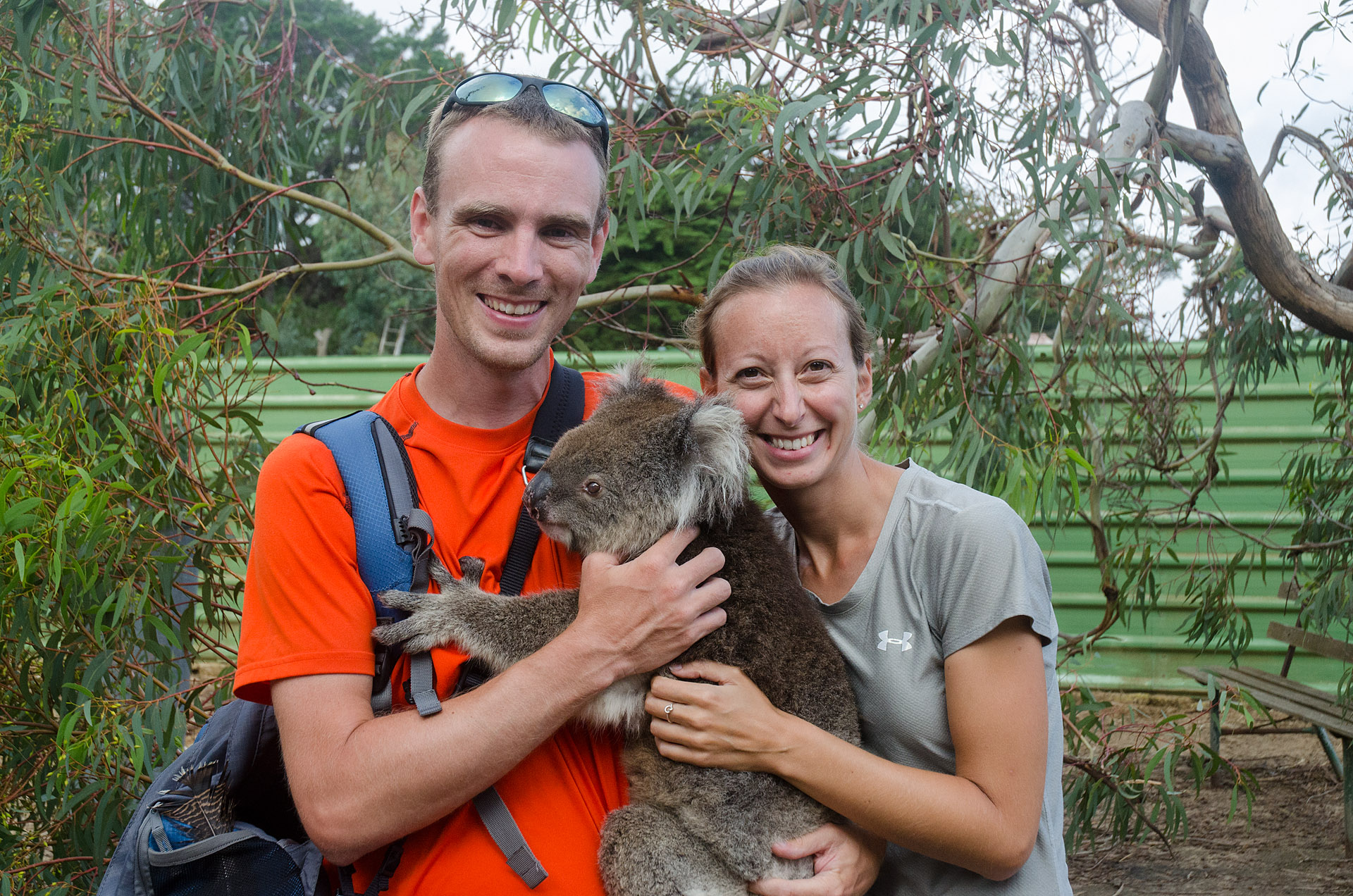 After we return the koala to her tree, Paul grabs my arm and begins pulling me towards a fence. He pulls my backpack off along the way and tells me I’ve been elected for the next spectacle. “What are you doing to him?” someone inquires. “He’s an American bloke, who cares?” Paul retorts. He leads me to a fence where I see several emu heads peering over. He spins me around so my back is to the fence and I see several more emus advancing. Paul is cackling now. He grabs a handful of barley from a bucket and, before I know what’s happening, dumps them on my head and the feeding frenzy begins. More barley is thrown on my shoulders and shirt, and all I can do is laugh and laugh as a half dozen hungry mouths snatch beakfuls of food off my head, shirt and shorts. 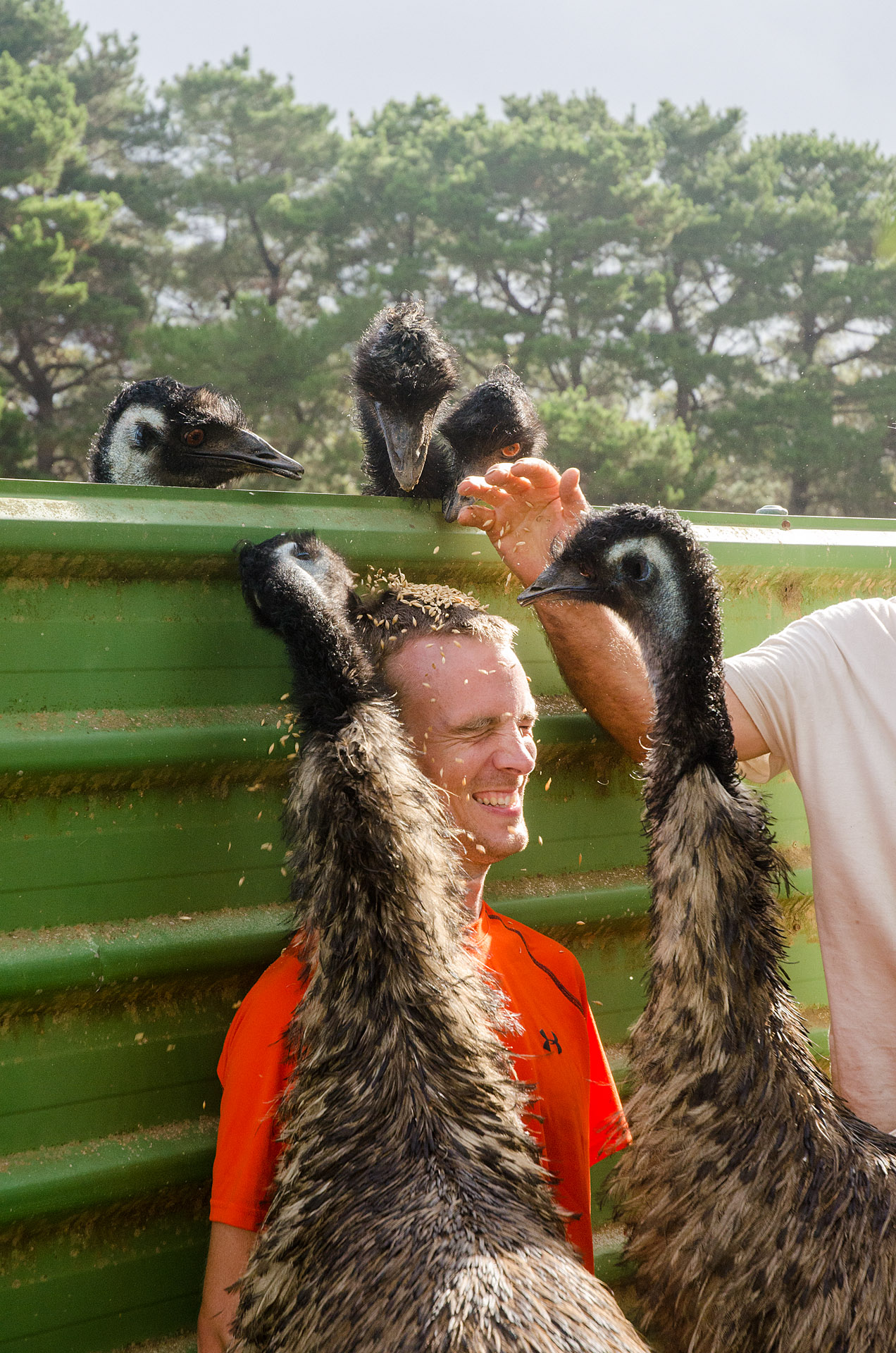 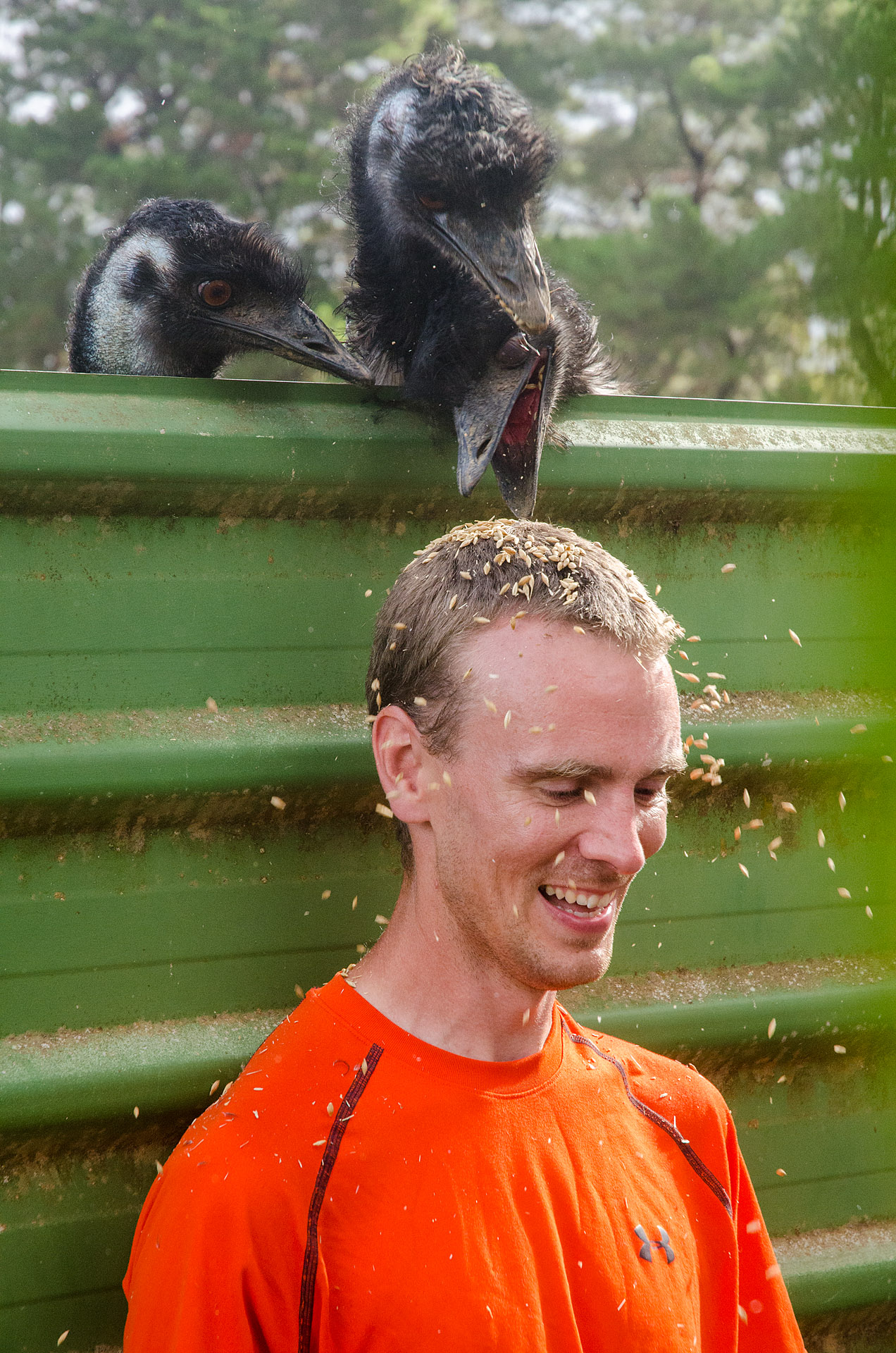 After the feeding is over – and I’ve emptied barley grains out of my pockets and shoes – we go to one of the aviaries. We are greeted loudly and enthusiastically by Giggles, one of their resident kookaburras, who laughs and hoots at us as we walk by. Among the orphaned or injured native birds are a number of pet parrots and cockatoos whose long lifespans have resulted in their outliving their owners. We’re told that Jo, a red-tailed black cockatoo, is not very social, but will occasionally pick a person that reminds him of his previous owner for affection. Jo chatters at me for a few moments, and as I turn my back to ask a question, I hear some flapping; suddenly Jo is on my shoulder. I have been chosen.

Paul digs out some almonds and the birds all know the routine. They happily pose for photos while gnawing on their tasty treats – perching on heads, shoulders, arms, or anything else that sticks out a few inches. Hey Sandy, doesn’t this look like fun?! 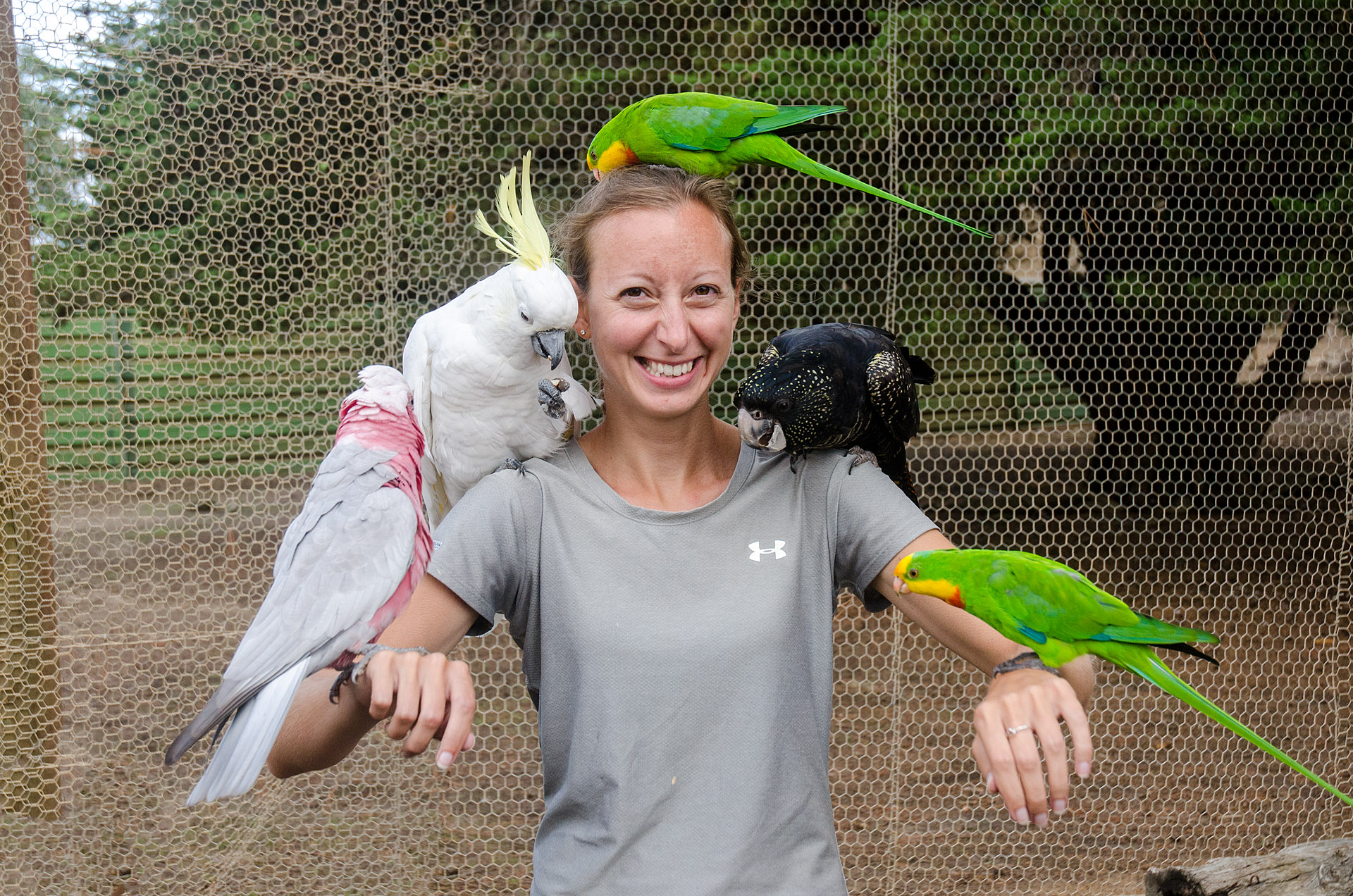 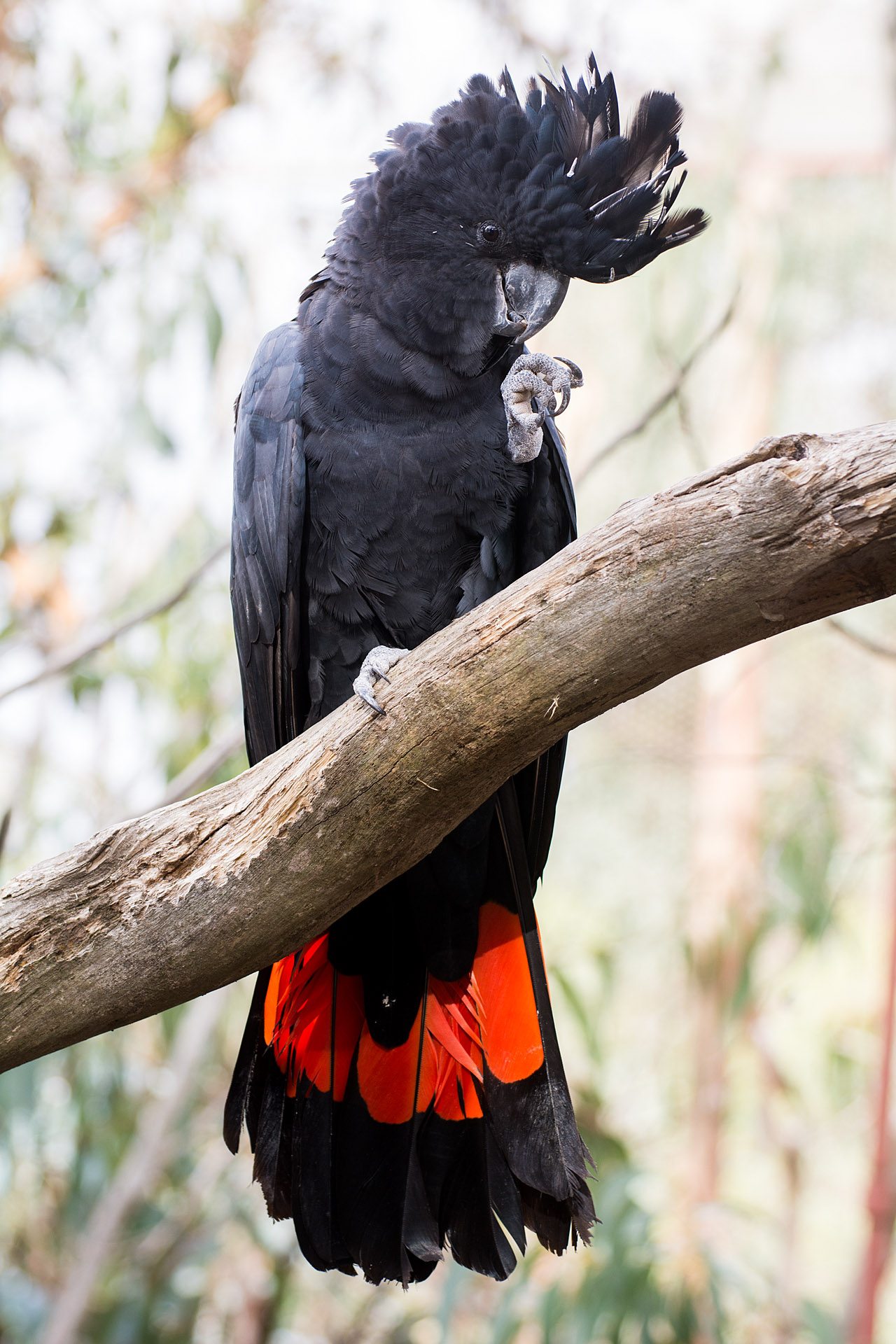 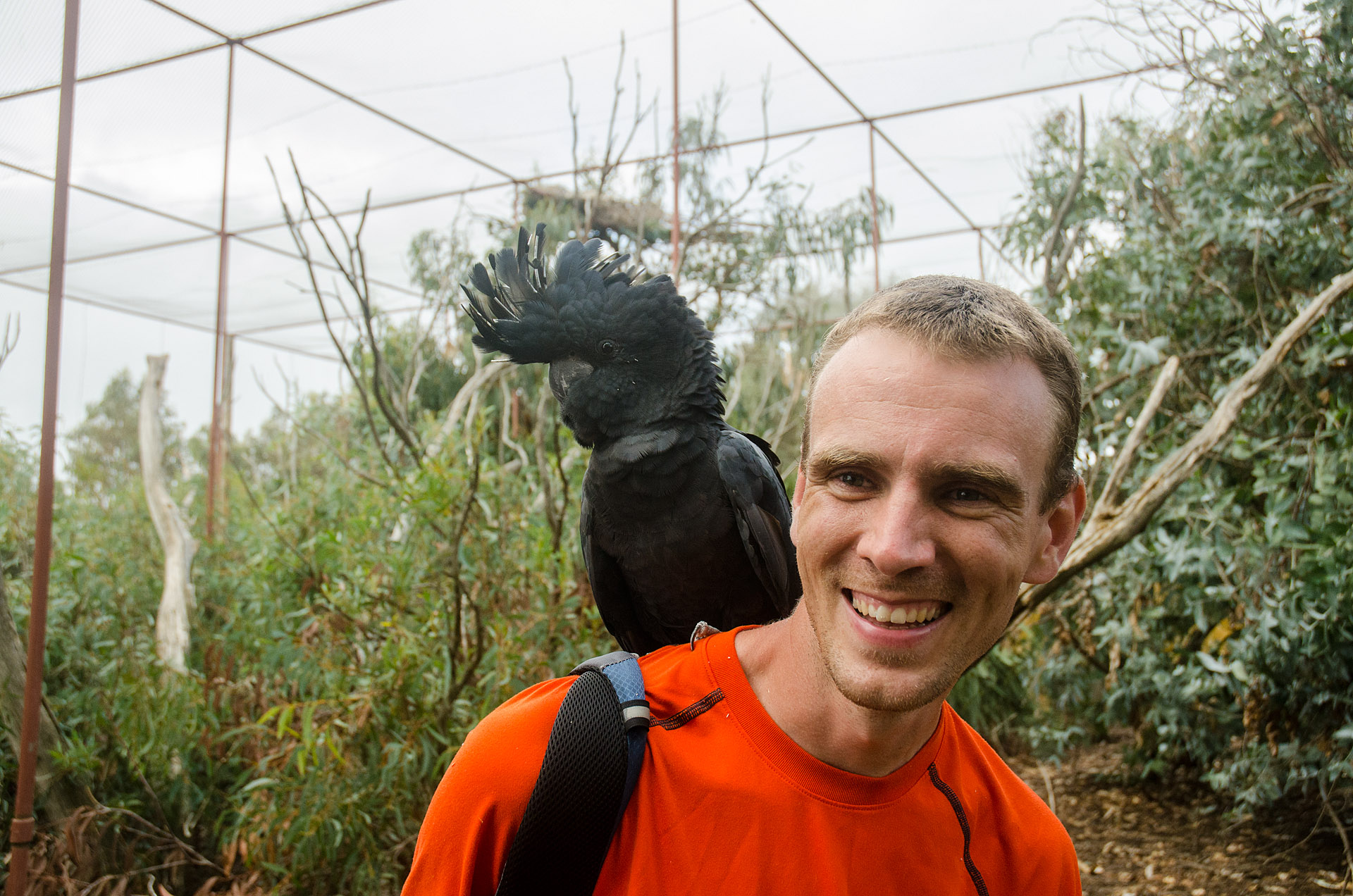 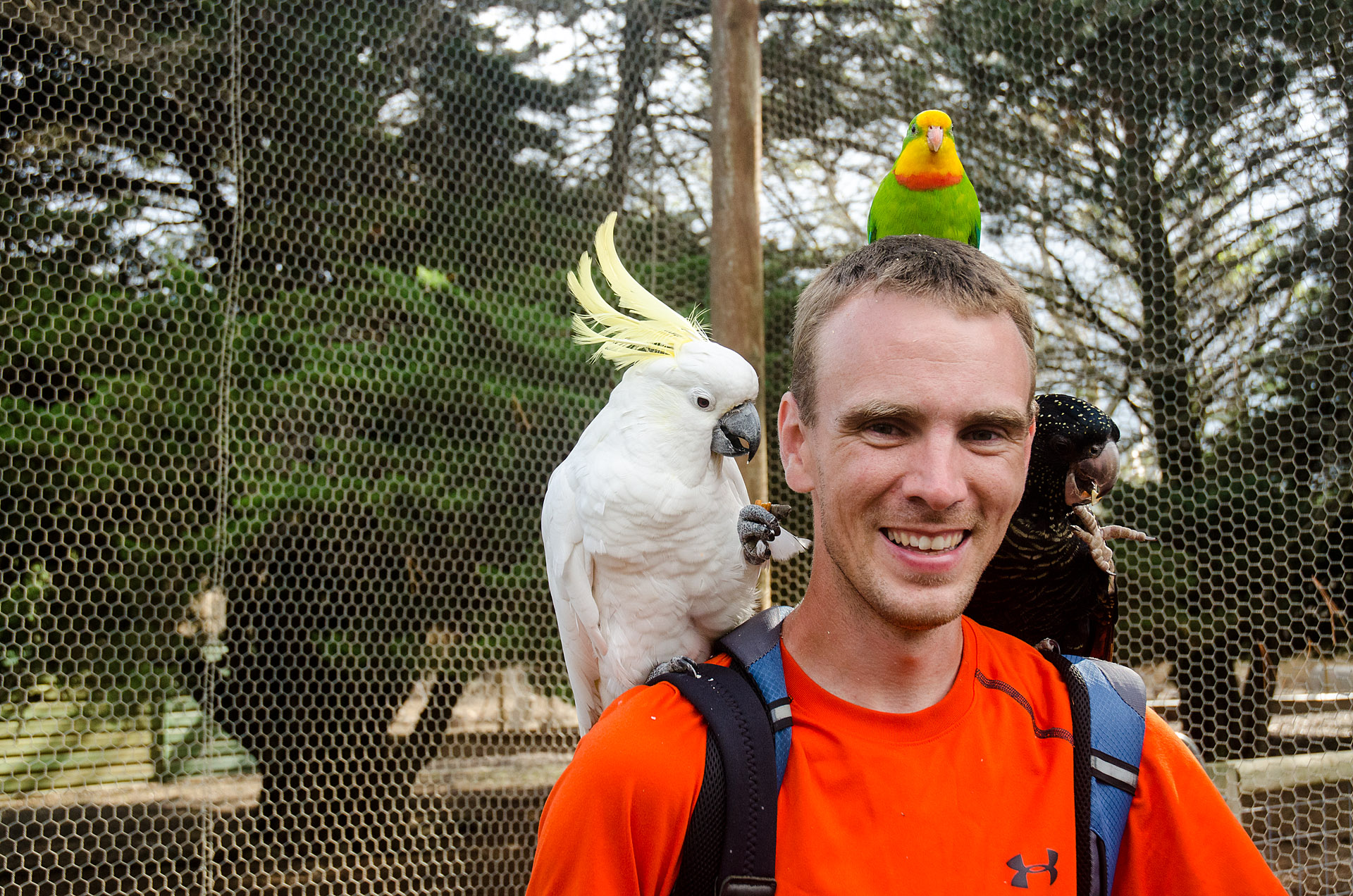 Finally, we get a special treat as Paul brings out a young, fledgling boobook owl. Boobooks are the smallest and most common owl on mainland Australia. He is beautiful, and gently perches on our hands as he wolfs down morsel after morsel of raw hamburger. This owl will eventually be part of their organic gardens, where a variety of bird species ensure their vegetables and fruits remain insect- and rodent-free. 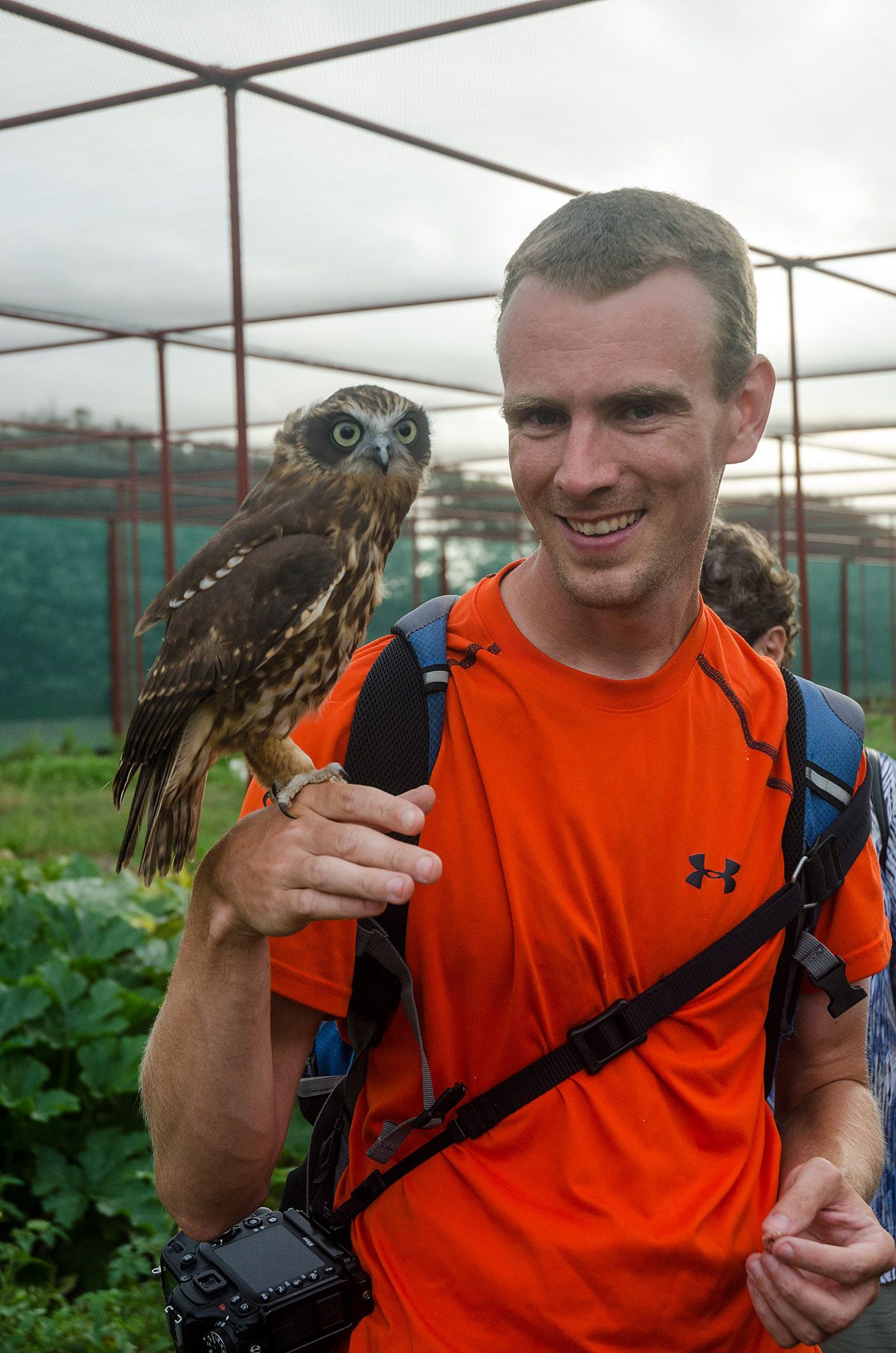 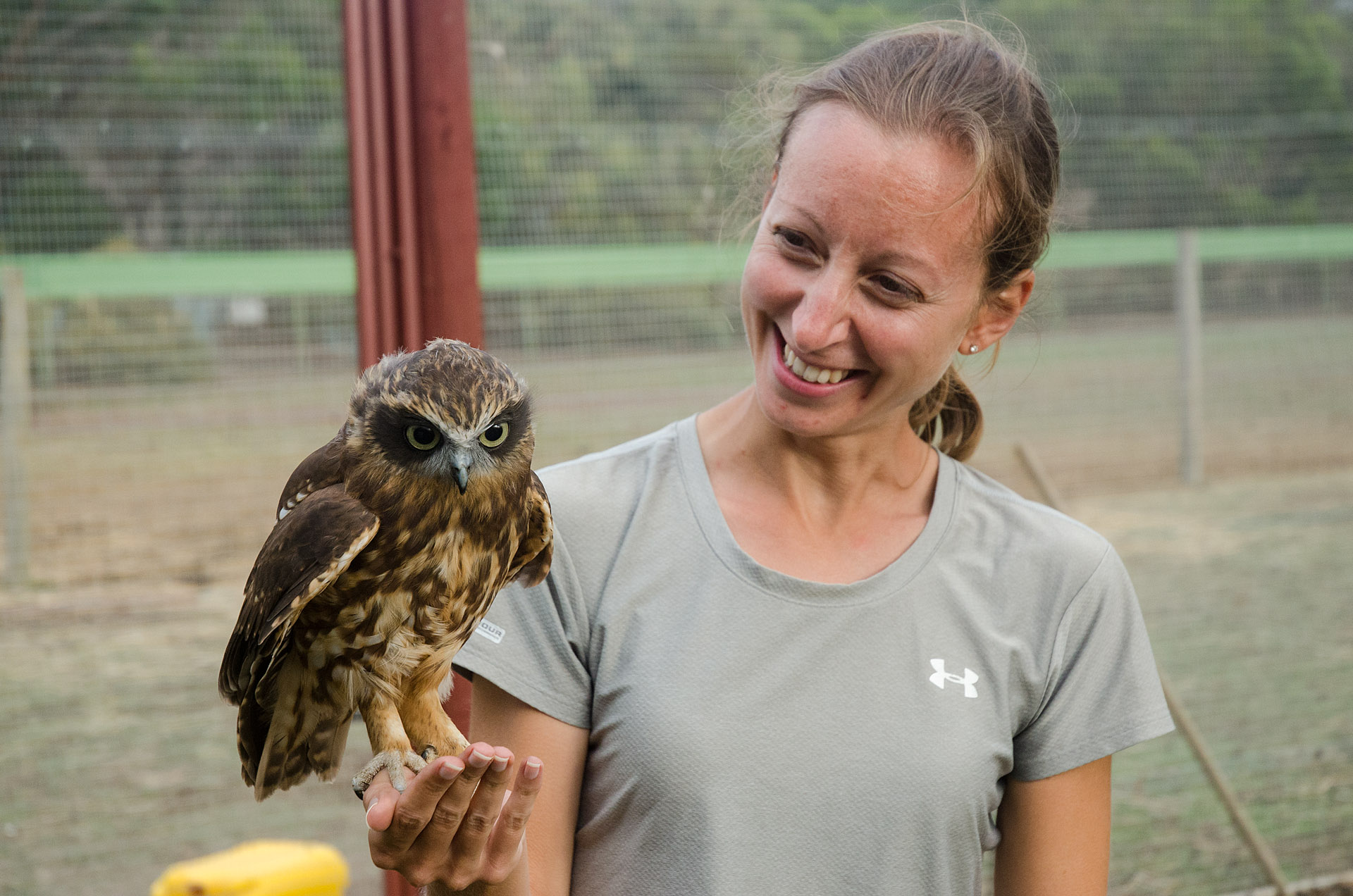 As we reluctantly leave, I press a donation into Paul’s hand. He shakes his head and tries to return it, but I insist. Twice. He finally relents. It takes quite a family to make room on their farm for a couple hundred refugee animals, and Paul clearly has a heart as big as his sense of humor.