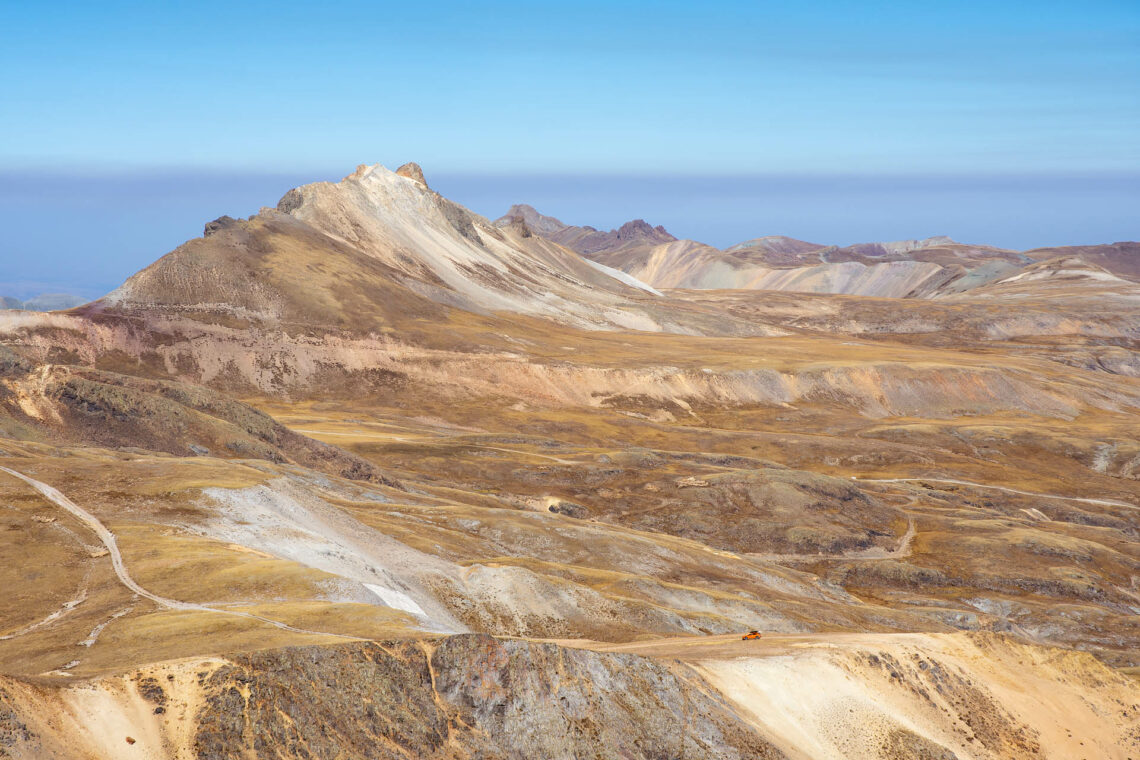 On an episode of his beloved PBS series, painter Bob Ross once said, “we don’t make mistakes. We have happy accidents.” A budding artist growing up, I loved watching The Joy of Painting at my grandparents’ house. Whenever he whipped out that fan brush to create another ‘happy little tree,’ I would stare with wonder at his effortless technique. As an adult, I now appreciate even more than his creative talent his ability to find perfection in every ‘little world’ he imagined on those canvases.

Much like painting, whenever you take on a new adventure, you must be prepared for something unexpected to happen – even if you’ve painstakingly planned out every detail in your head. When we set out one fateful Sunday for a hike, much like we did every other weekend morning, our goal was Uncompahgre Peak. We never made it. We ended up about ten miles south when our car dead-ended atop a ridge. While we’d never heard of Engineer or Seigal Mountains, and certainly had no intent to visit, the pair of San Juan summits ended up being that day’s happy accident.

It was a gorgeous Sunday morning in early October, our first full weekend in Durango. We’d decided to hike Uncompahgre, Colorado’s sixth highest peak and our first U.S. 14er. We had more supplies and camera gear than we could possibly need, a GPS map, a full tank of gas, and we were out the door ten minutes early. We’re typically a well-oiled machine when it comes to hike prep, and we were especially excited to hit the trail that day.

The circuitous route from Durango to Uncompahgre takes about four hours, traveling east and northwest through Pagosa Springs, Creede, and ultimately Lake City. However, that morning Google Maps suggested we take an alternate route up through Silverton. It transformed our 186-mile slog into an 81-mile jaunt and claimed we’d shave a full hour off our travel time. Seemingly a no-brainer, we turned left and headed north on 550.

When we got into Silverton about an hour later, we took a right out of downtown onto County Road 2. The road immediately turned to dirt, but since it was surprisingly decent, we didn’t question it. Within just a few miles, however, it turned into a washboard. About eight miles in, it pretty much disintegrated before our eyes. As we navigated what was easily the worst road I’ve ever seen, I was becoming increasingly anxious, both at the thought of ending up in the middle of nowhere with a disabled vehicle and missing out on our perfectly planned hike. With Stephan feeling more confident, we pushed on. It took us another hour to drive just seven miles, when, to our surprise, the road came to an unexpected end atop a mountainous ridge.


With no clear road forward in the direction Google’s compass was insisting we drive, Stephan got out to look around. His eyes wide, he pointed toward the vestiges of our presumed road, which appeared as if it had simply slid off the side of the mountain. As we stood dumbfounded atop that ridge, we knew there was no saving our summit. Although it had been with increasing apprehension, my eyes had been glued to the surrounding landscape our entire way up to the ridge. Wherever the hell we were, it was absolutely gorgeous. Between the scenery and Sanchez’s whiny pleas to be finally be freed from the backseat, we decided to get out of the car and just hike right where we were. 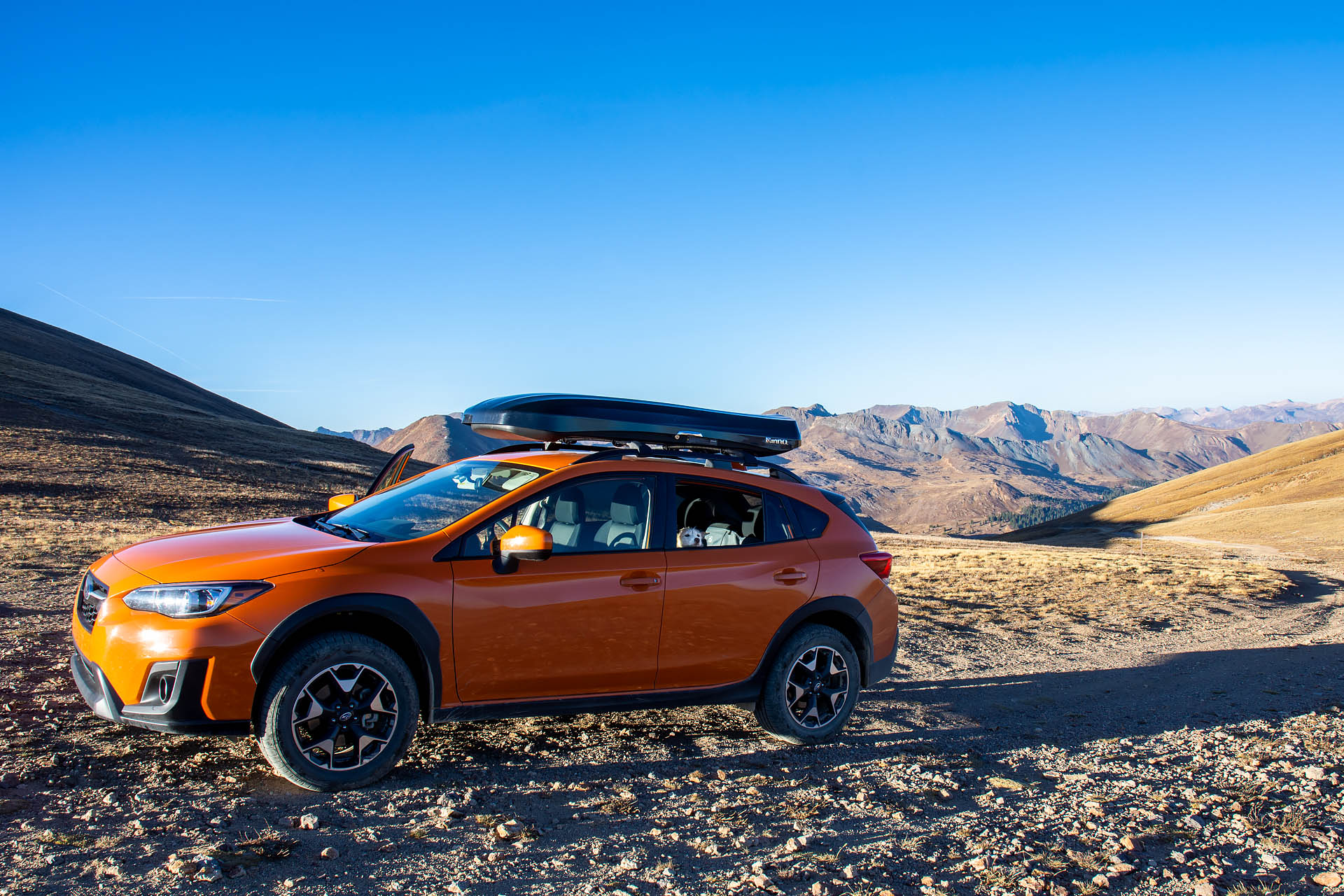 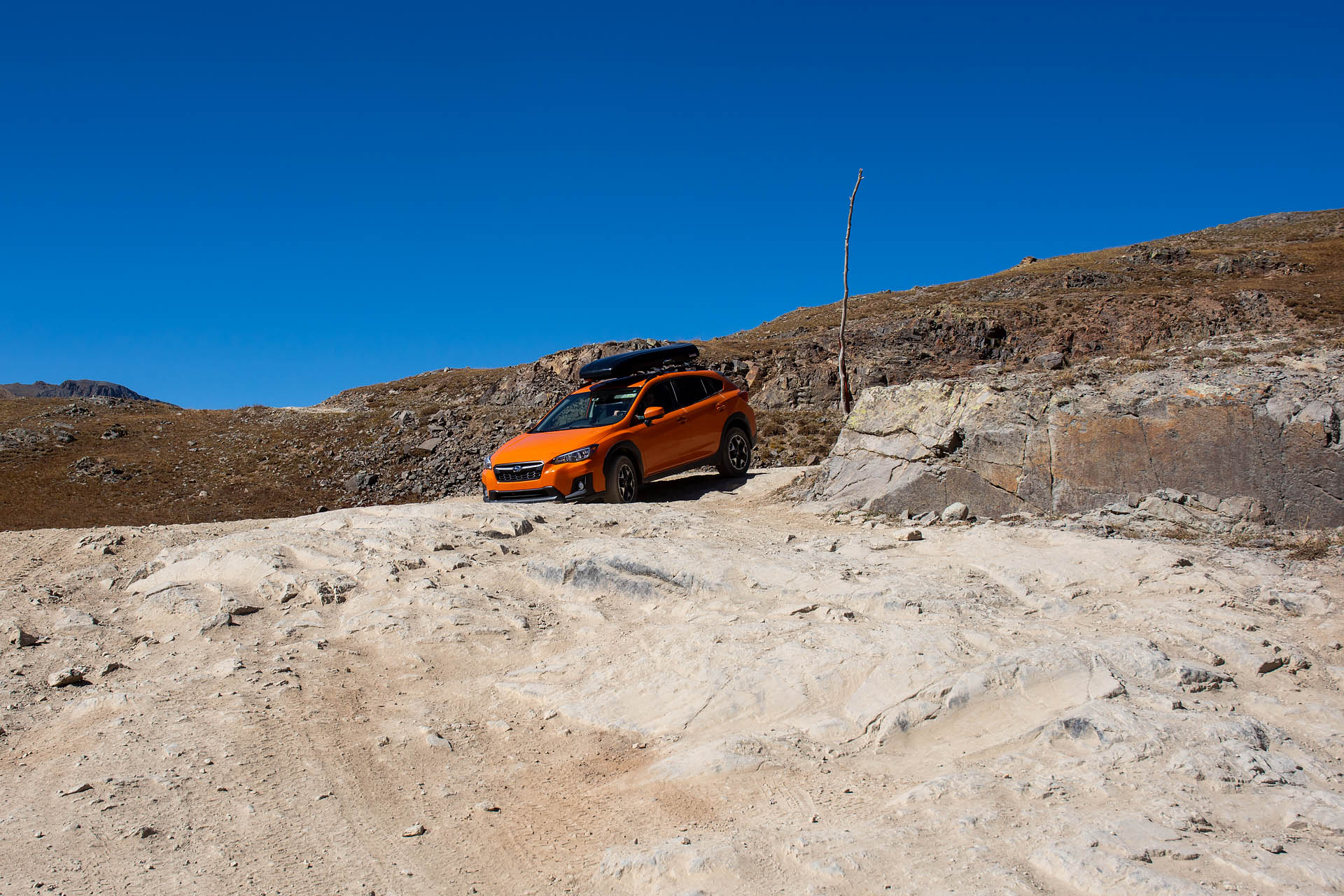 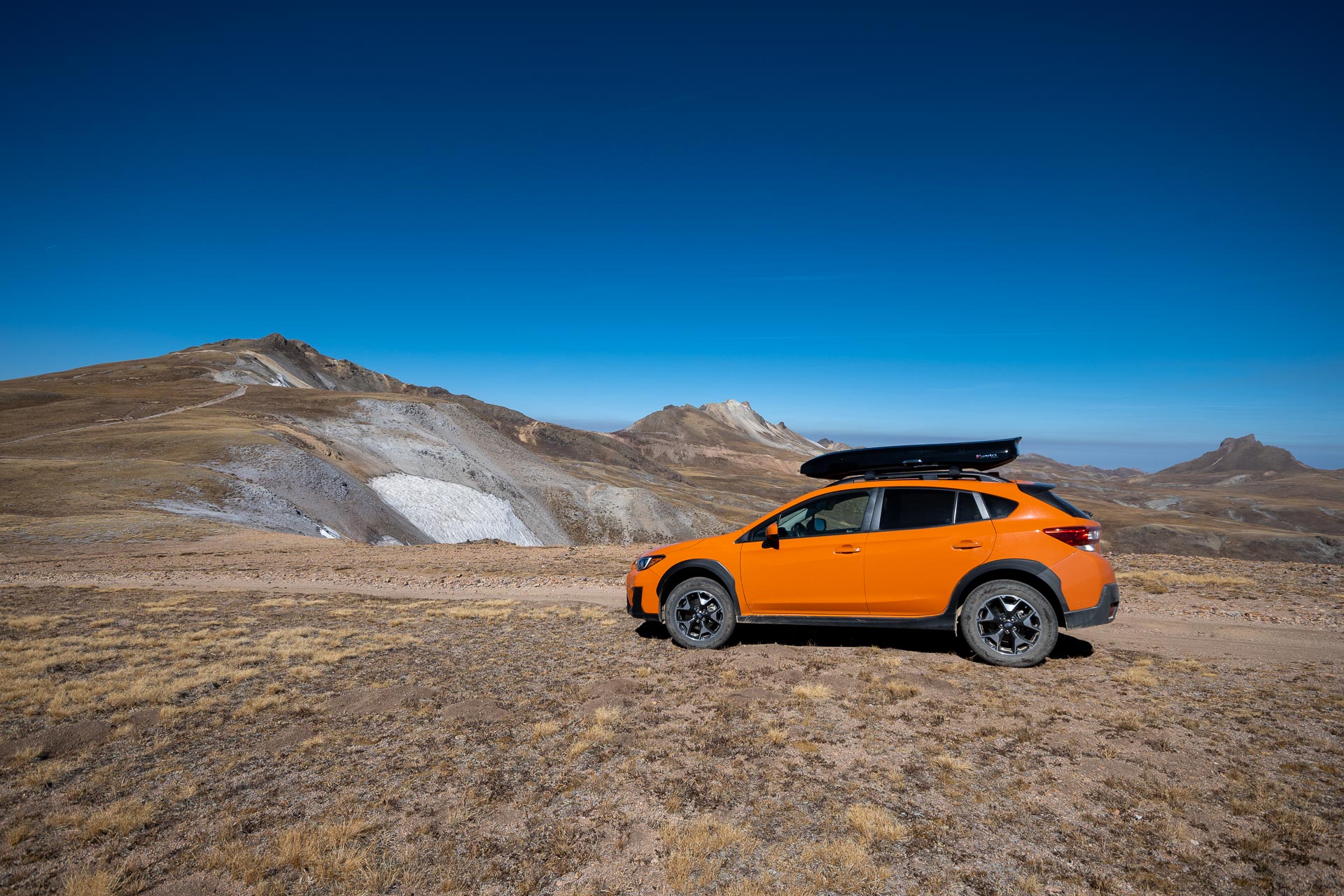 There were summits flanking either side of the saddle we’d parked on, with what looked to be a trail leading partially up the peak to our west. Stephan opened his GPS app and announced that we did indeed have a pair of 13ers on either side of the Subaru. Engineer Mountain’s summit (13,218’) was about a mile to our west, while Seigal Mountain (13,274’) was about equidistant to the east. As we studied the map further to get our bearings, we realized we were just northeast of Ironton, and right beside Engineer Pass. Looking down, we suddenly spotted the road wrapping around the other side of Engineer Mountain. Upon closer inspection, we noticed that it could, in fact, take us all the way to Uncompahgre. Because it was now so late in the morning and, presumably, over another 17 miles of horrific driving conditions, we opted to stay put.

Decision made, we headed west for Engineer Mountain. It was a speedy trip to the summit given we’d thrown the car into park at around 12,700 feet. While the summit views were spectacular, being up there almost felt like cheating. Really, though, the day wasn’t about bagging peaks; it was about just letting go and embracing where the journey had taken us. 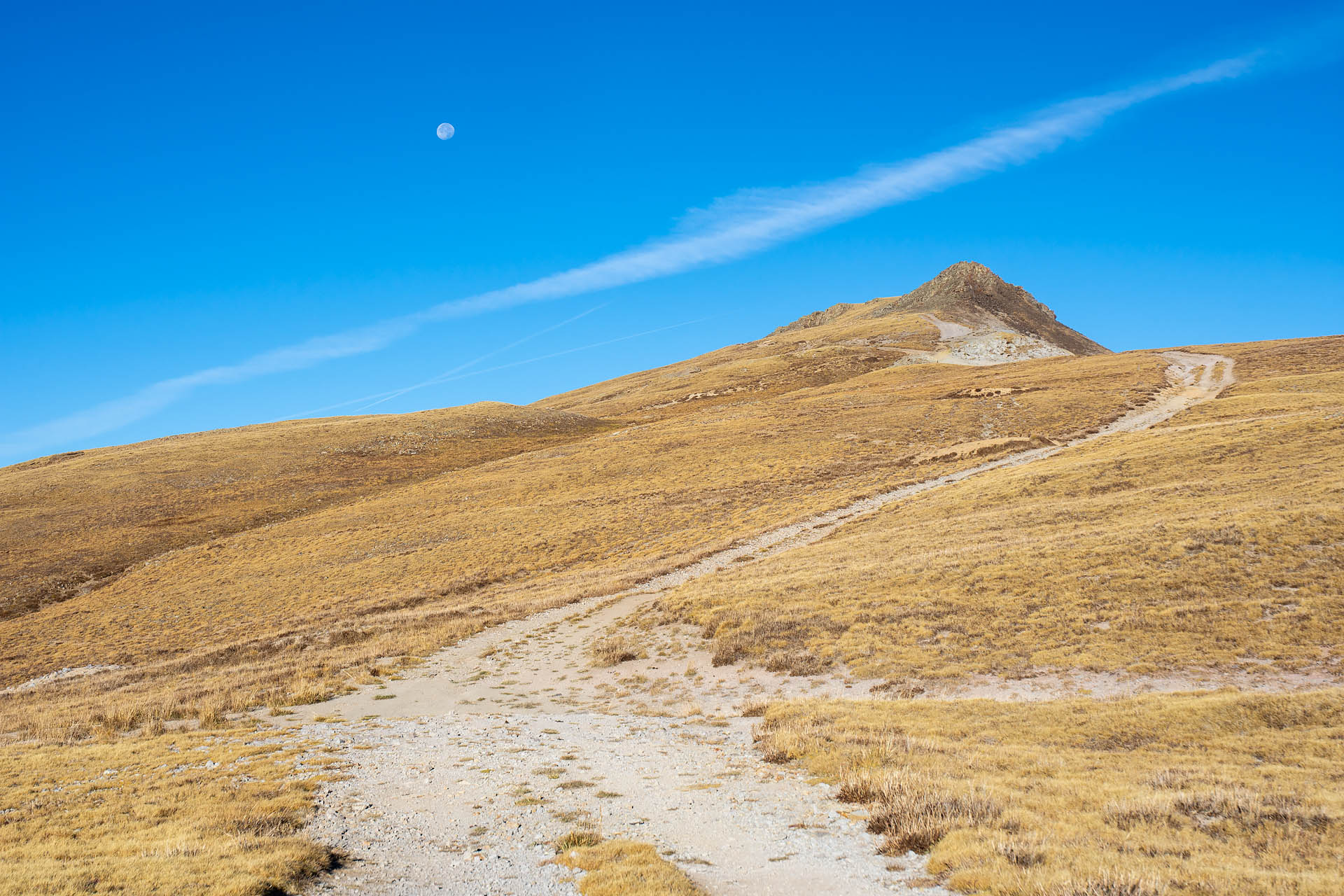 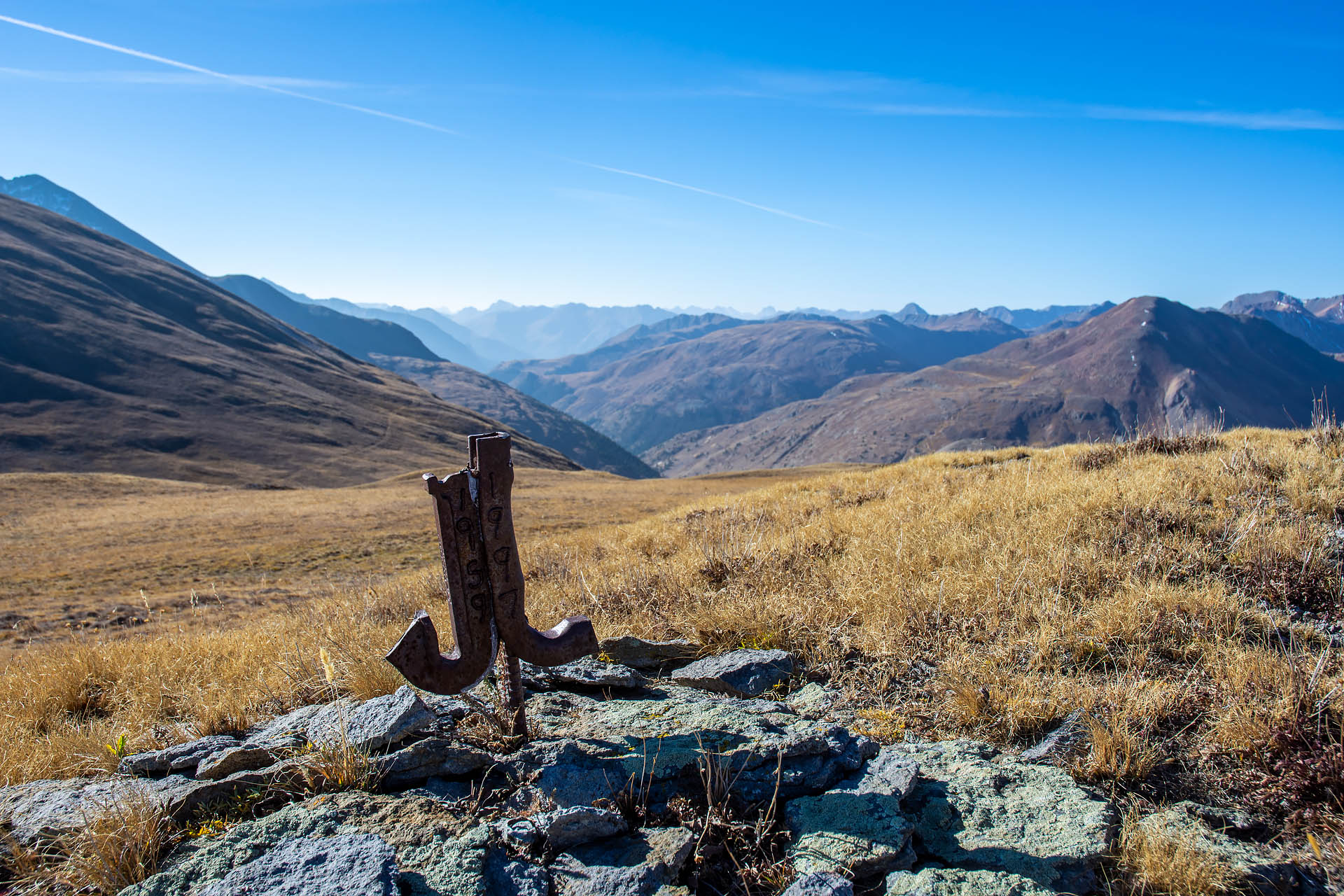 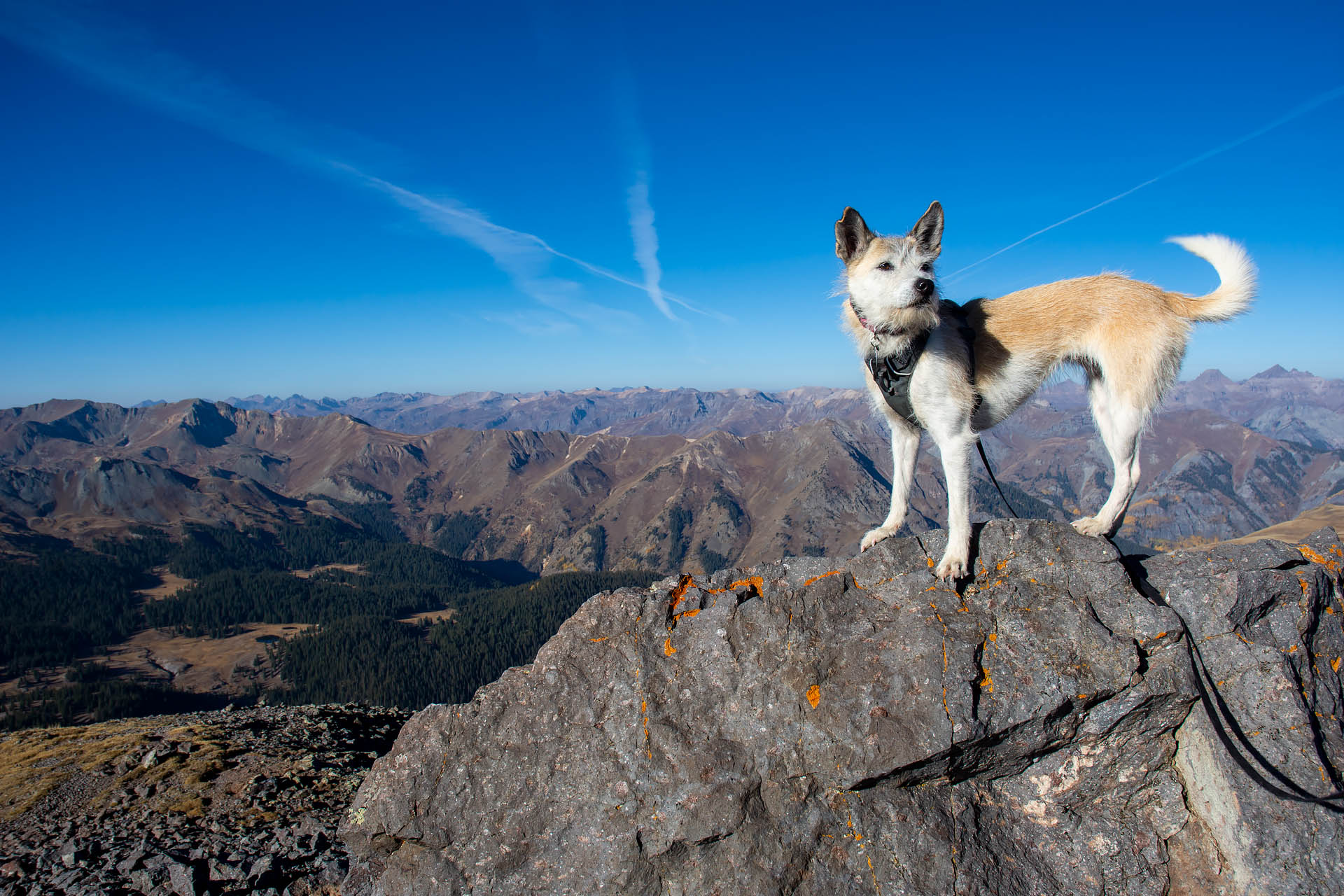 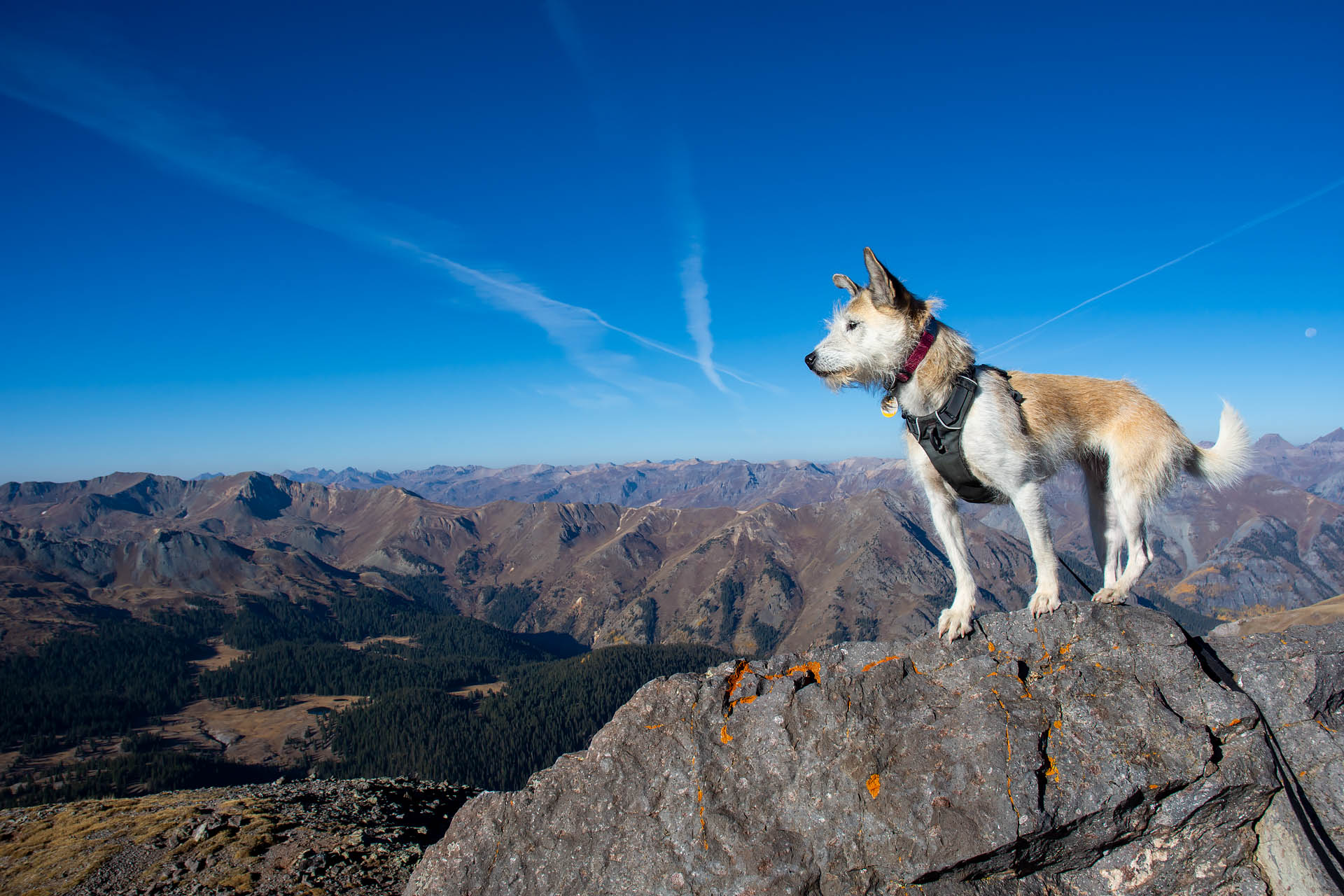 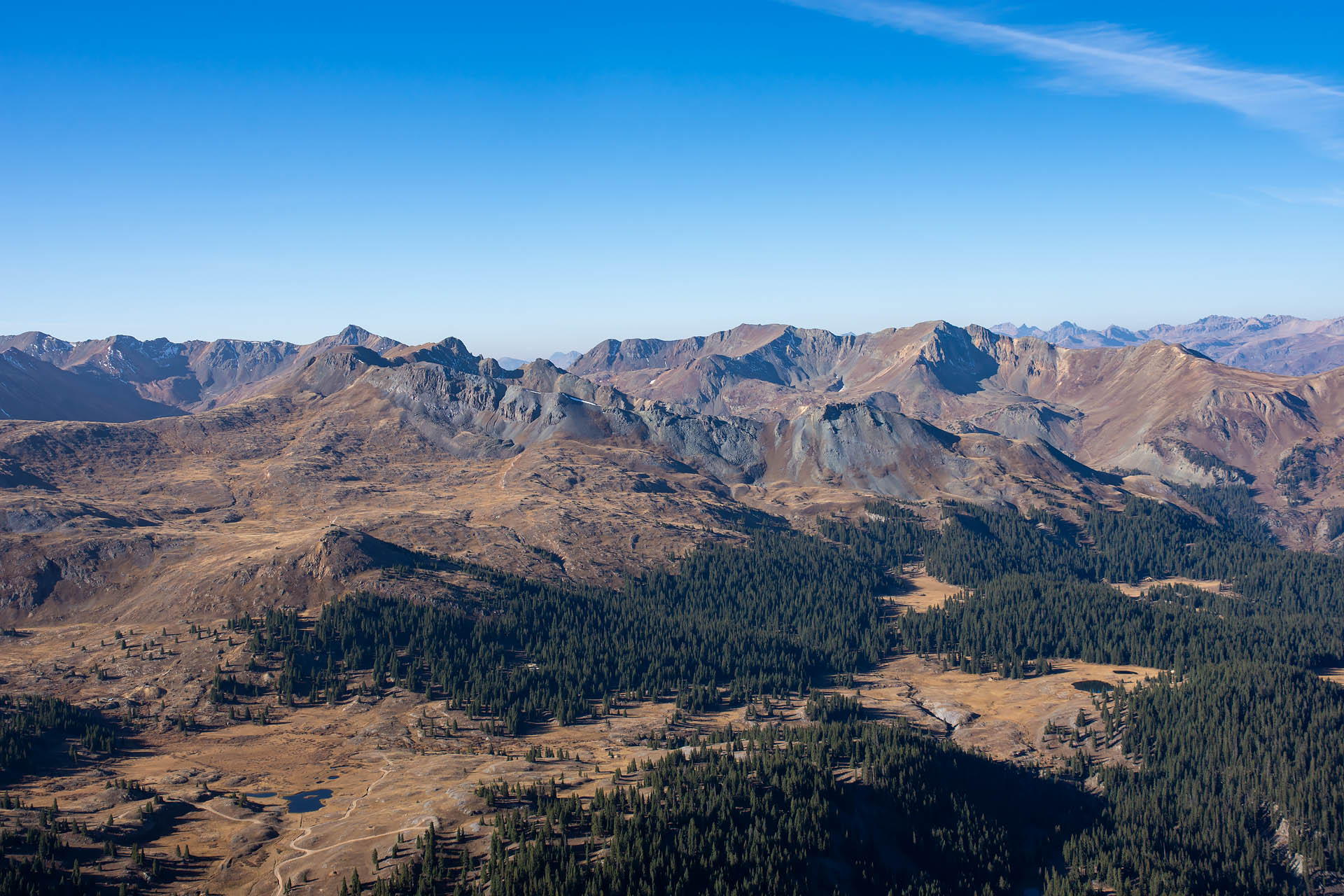 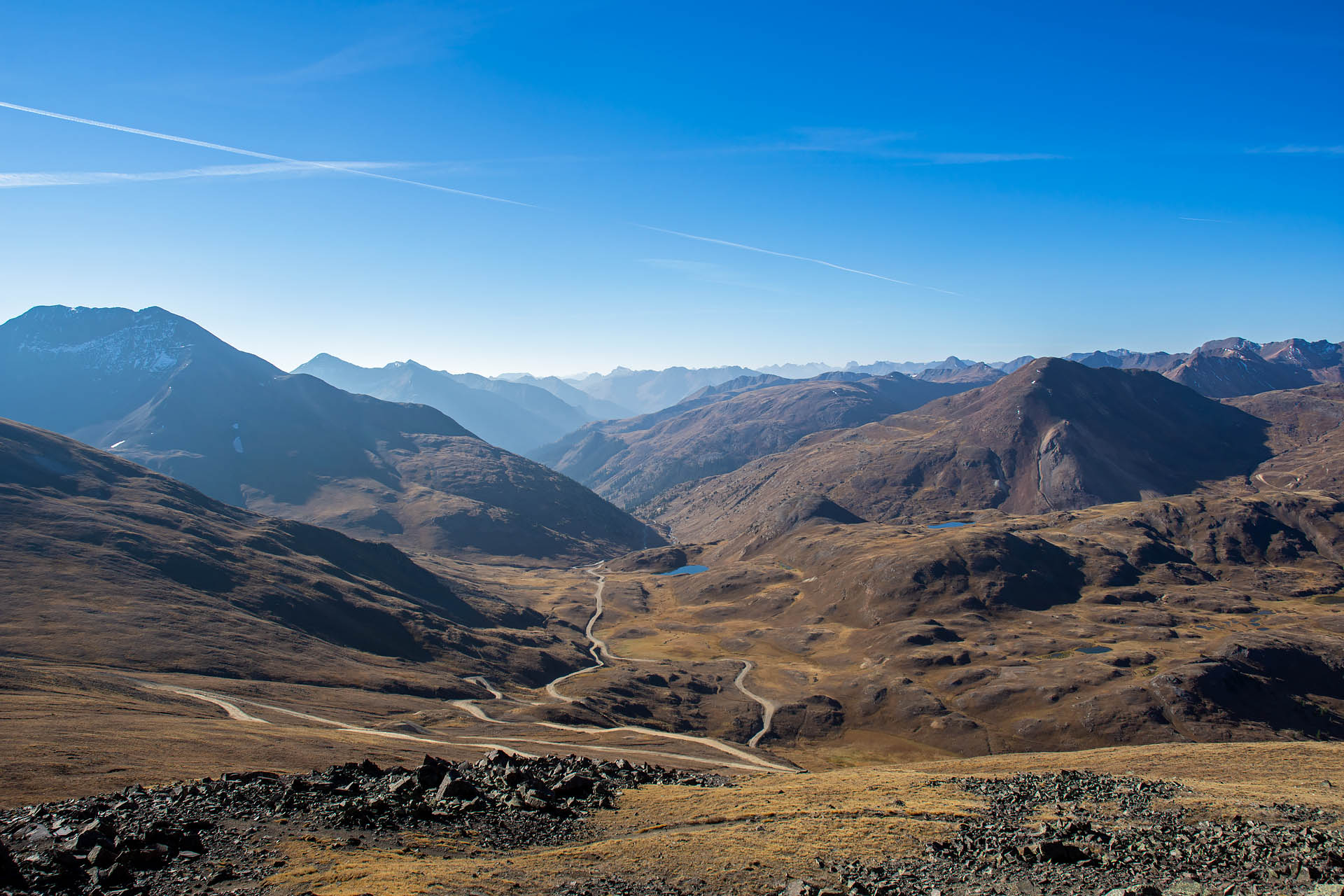 Sanchez was beyond thrilled with the adventure. With Colorado’s trails being much more trafficked than those in northwest Montana, I think she was really enjoying having this sprawling space all to herself. I know we were.

We eventually strolled back down to the Subie, grabbed our lunches, and headed east for Seigal. With a little easy route finding and the summit clearly within sight, it was another easy walk to the top. Seigal’s summit overlooked neighboring Wood Mountain and the turquoise waters of an unnamed lakelet fed by Horseshoe Creek. We sat at the top and ate our sandwiches, both of us in disbelief that we’d stumbled so fortuitously across such an isolated and impossibly beautiful place. 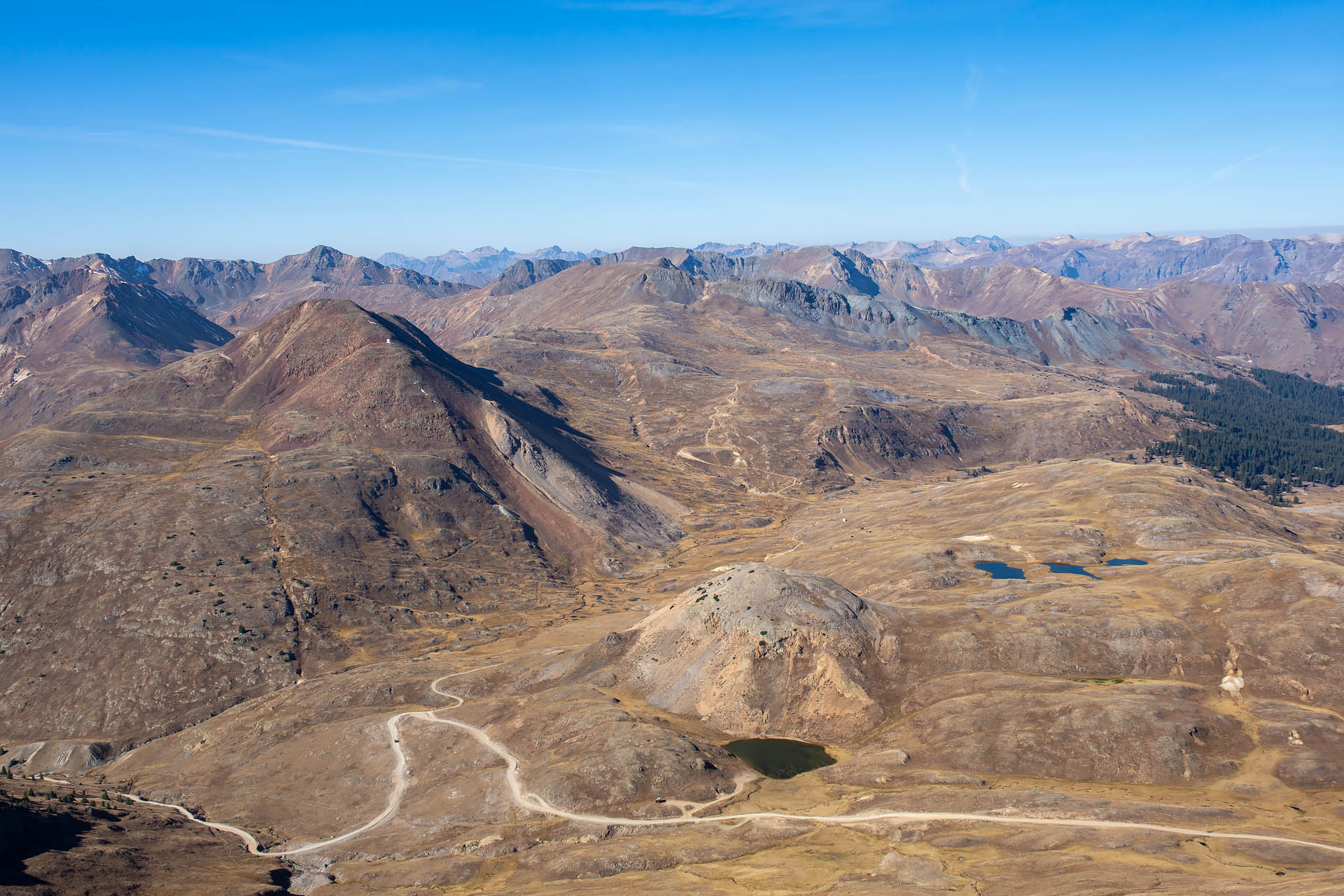 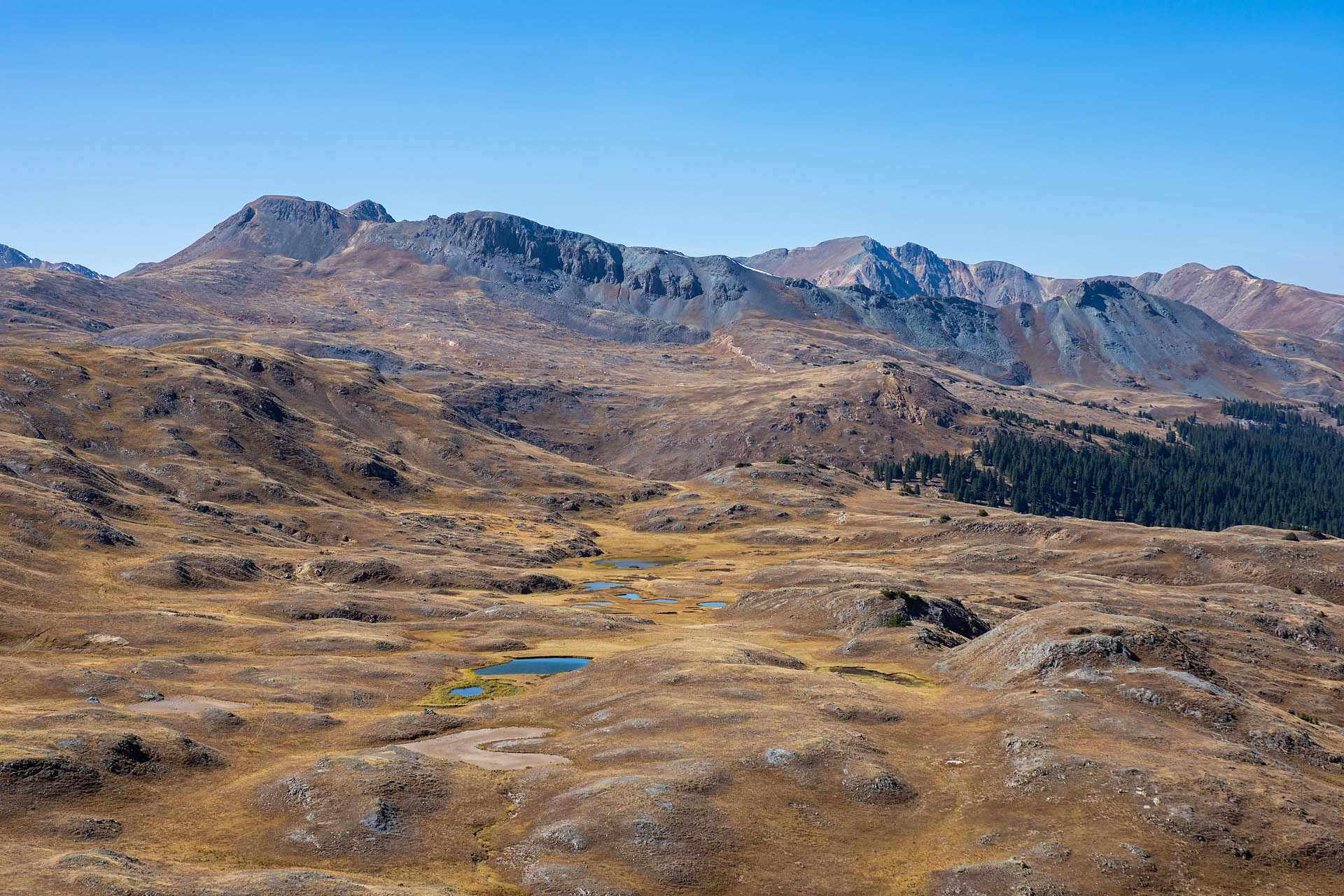 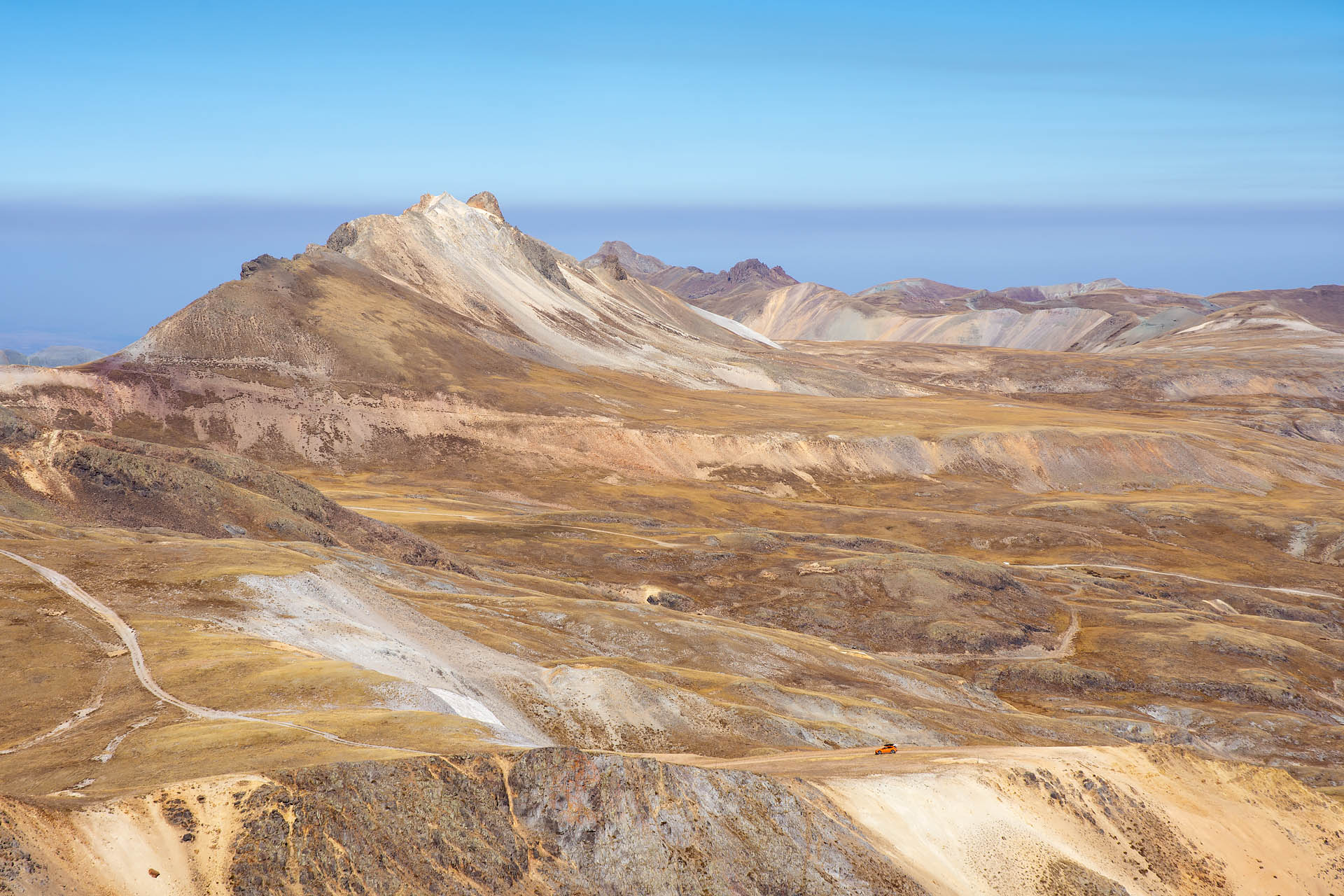 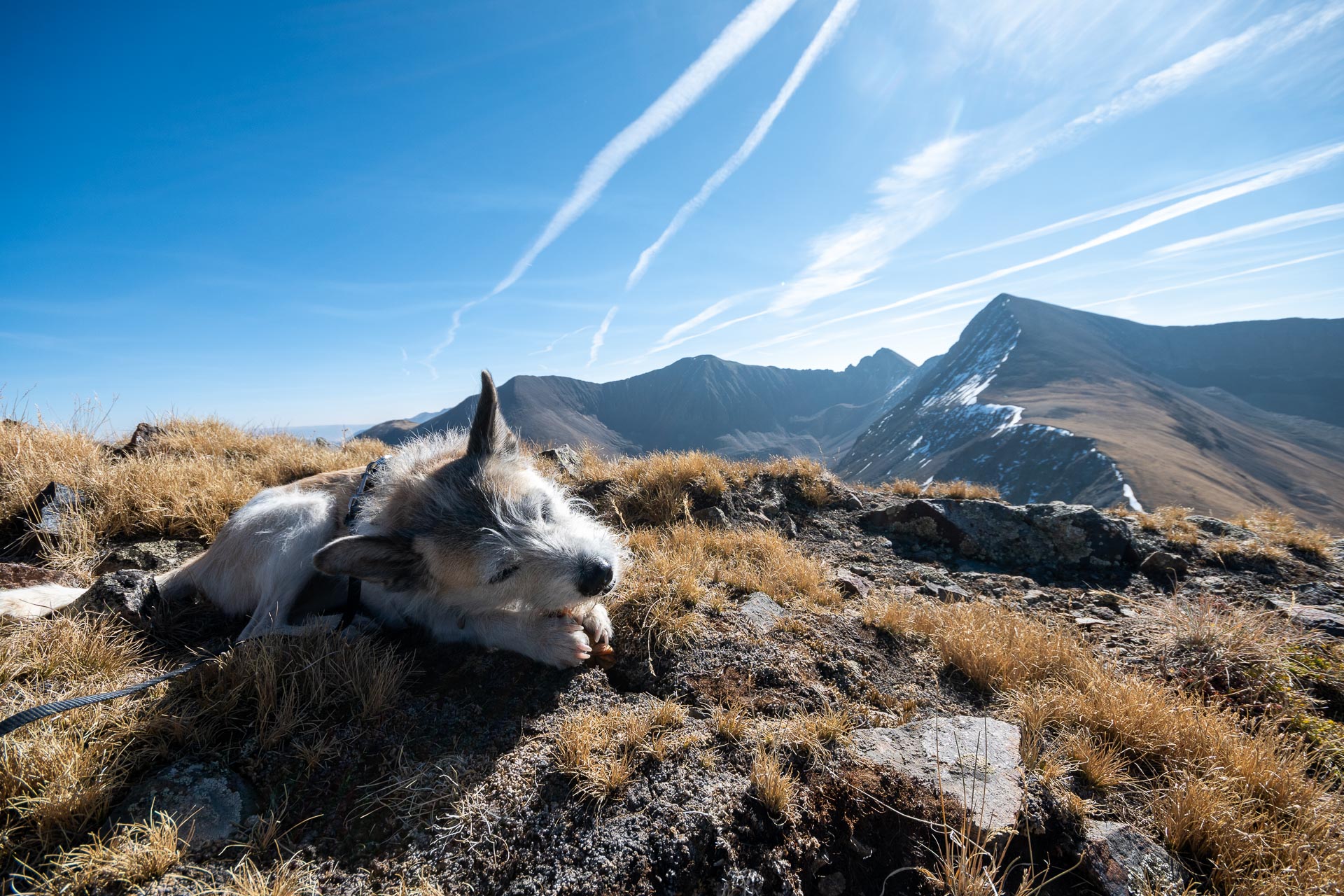 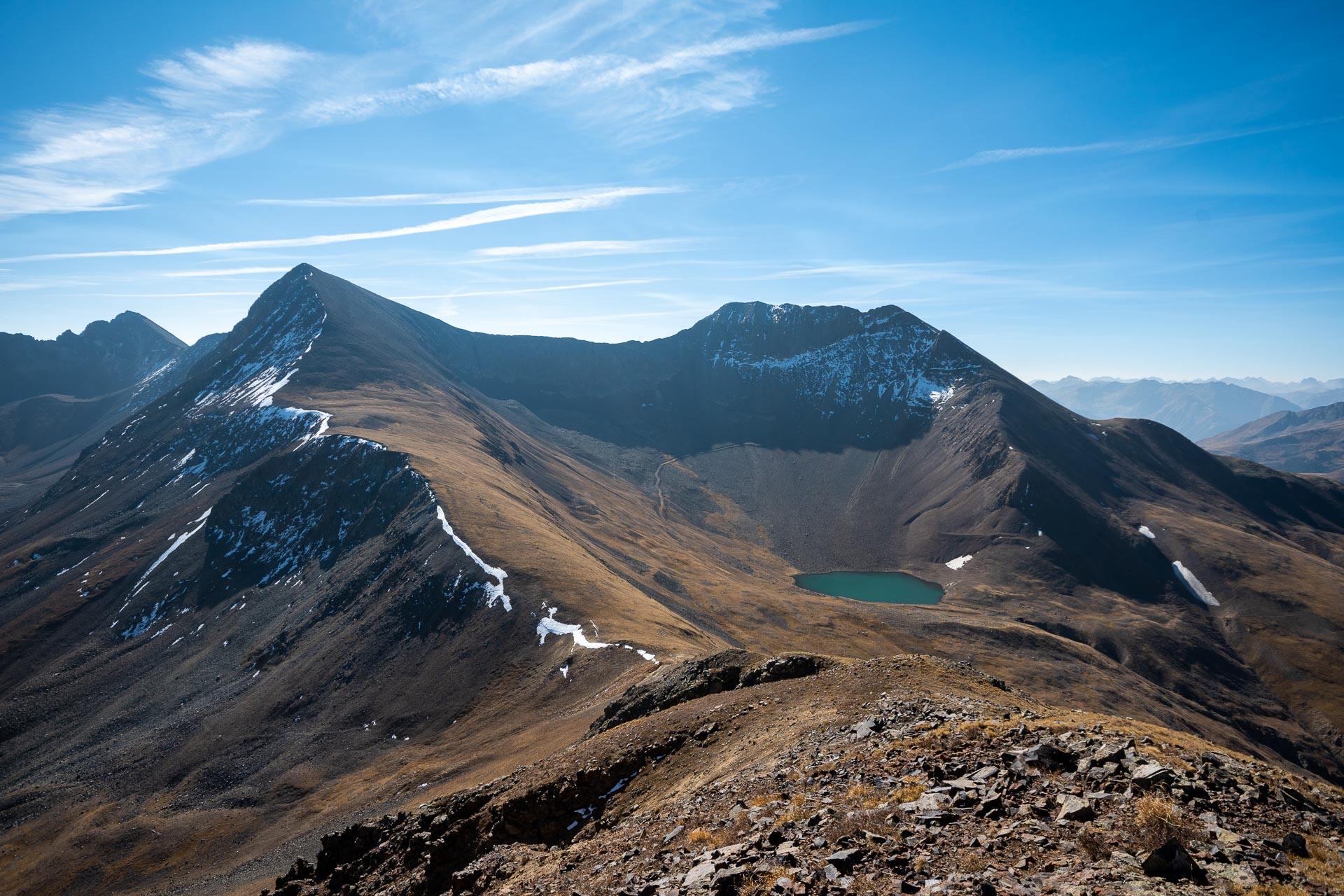 As we made our way back to Silverton, this time with much more confidence and much less agitation, we finally realized Google had somehow directed us onto an OHV road. We began seeing ATVs and the occasional lifted Jeep with massive tires heading toward Engineer Pass. Lucky for us, our little Crosstrek with its wimpy stock tires rose to the challenge (also, Stephan’s a totally bad ass driver). While we didn’t bag our first 14er that afternoon, we had one hell of an awesome day. The scenery, the serenity, everything was perfect… except maybe the road.

Once I was back at my computer, I was finally able to sit down and look at our impromptu adventure in more detail. What we actually drove was a portion of the Alpine Loop National Backcountry Byway1. The 65-miles scenic loop links the alpine towns of Silverton, Ouray and Lake City, passing a handful of abandoned mills and mining villages and traversing two high mountain passes – Engineer Pass (12,800’) and Cinnamon Pass (12,640’). Designed for ATVs and high-clearance 4x4s, the full loop takes a solid 6–7 hours to drive. And while I definitely don’t recommend heading up here with a standard SUV, if you’re interested in renting an off-road vehicle to make the journey, it’s some truly spectacular backcountry2. 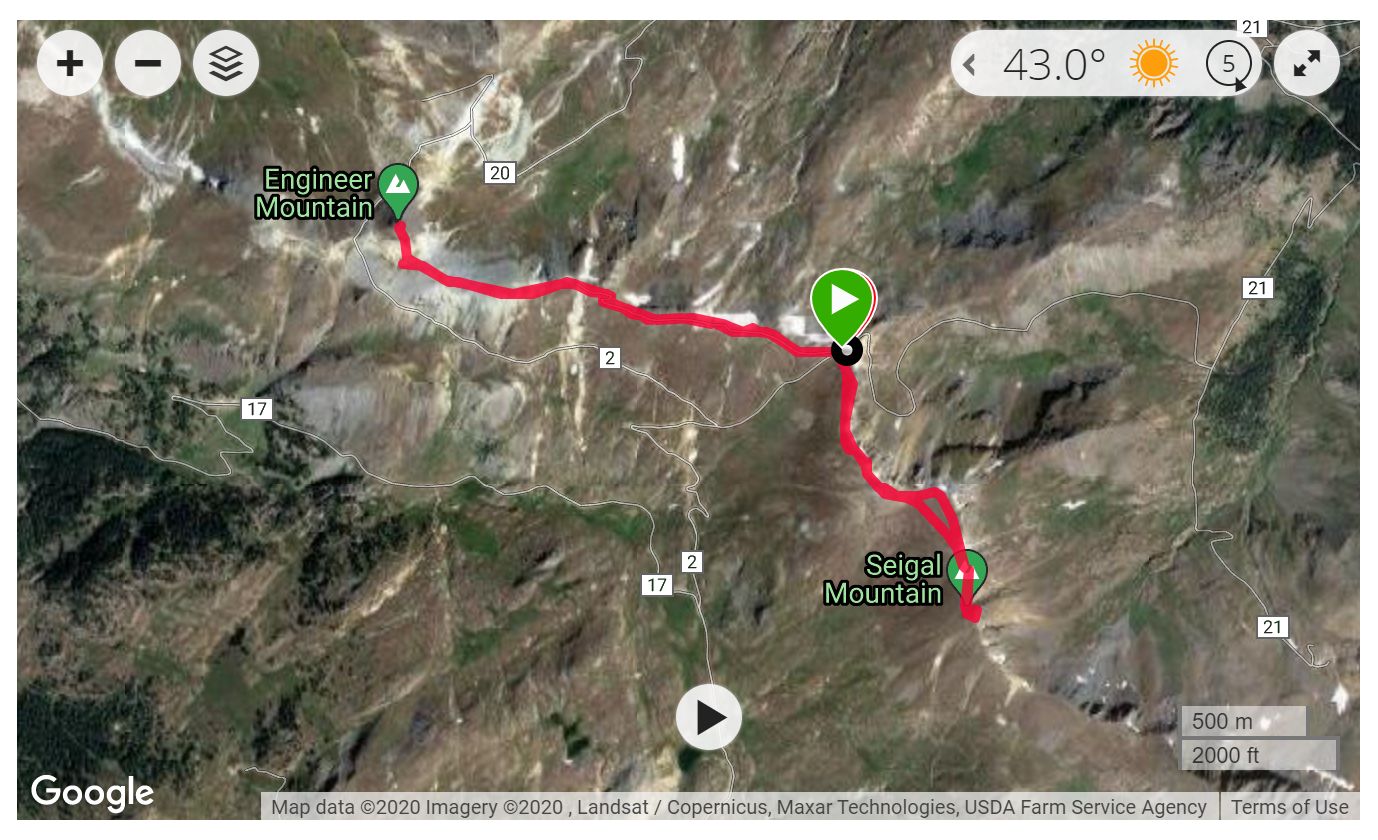 1For more information on the Alpine Loop, check out the Bureau of Land Management  or the Colorado DOT.

2Know what you’re getting into before you go. This is an OHV road and, although we were successful, it’s really not intended for a Subaru or the like. You’ll want an ATV or high clearance 4×4 with some high-performance tires if attempting this route (you’ll definitely want solid traction for some of the steeper sections). If you’re inexperienced with off-road driving, beware that it may be a bit intimidating in parts. Finally, this is some pretty rugged and remote backcountry. Cell phone reception is unlikely in most spots, and you’ll want to make sure you have a full tank of gas, food, water, and any standard emergency supplies. Do your research before you head out.