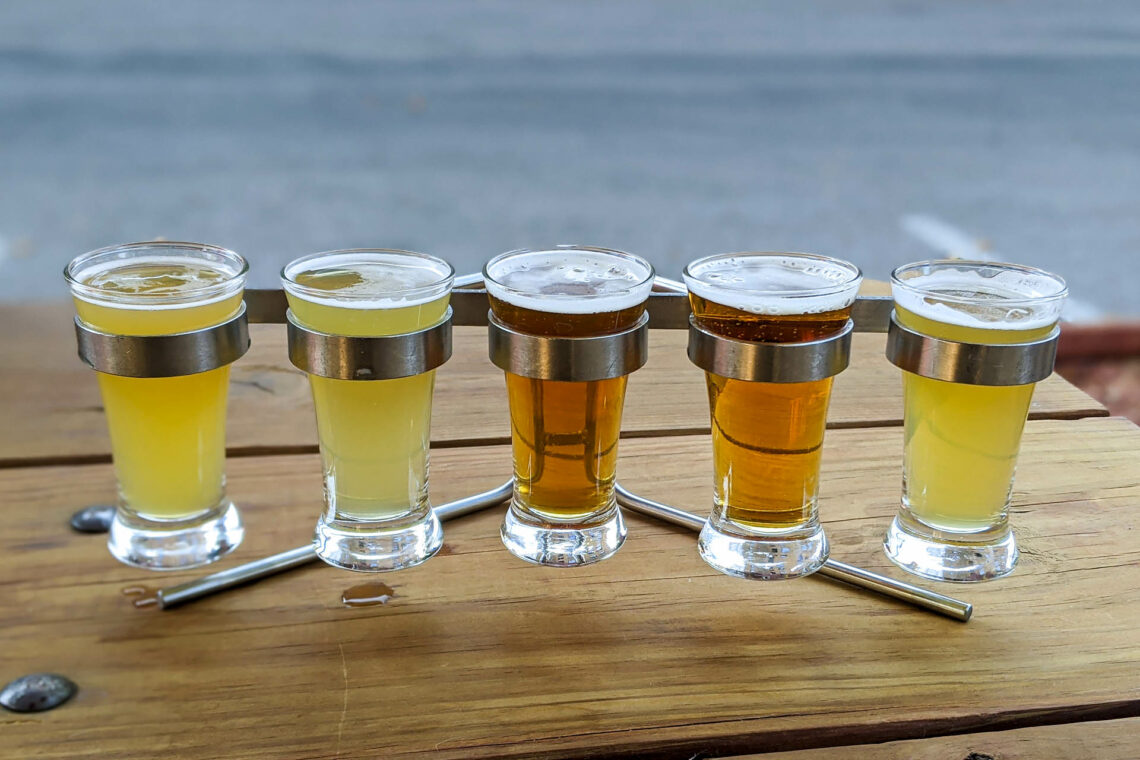 In between all our hiking adventures, we managed to find time to visit a handful of breweries around the San Juans. Always on the hunt for a nice IPA or hazy New England-style beer, we were happy to find a few breweries that seemed to focus on those hop-heavy styles. Additionally, as advocates for environmental conservation, we were also excited to find a couple that were focused on brewing their beer in a sustainable manner.

Ska Brewing has been operating in its current Durango location since 2008, and was originally founded back in 1995. Exemplifying its commitment to sustainability, today the brewery is entirely wind- and solar-powered, having installed over 200 solar panels on its roof in 2018.

When we visited in October, we sat outside on one of their socially distanced picnic tables. Each table was surrounded on three sides by a wooden privacy fence, which made it feel just a bit cozier and also a little bit safer with a barrier from your neighbors. The beer we tried was pretty good, although not overly inspired. We had sampled the Modus Hopperandi, Decadent IPA, and Buster Nut Brown more than a decade ago at a local beer fest in Raleigh, NC. This visit, we tried two hazy IPAs, the Moral Panic Brut IPA, Decadent Imperial IPA, and Euphoria Pale Ale. Our top pick went to the Hazy IPA, with the Tropical Hazy a close second.

Surprisingly, the big winner of the day went to Ska’s green chile chicken soup, which was served with a generous side of spiced tortillas. Stephan ordered a cup of soup because it sounded tasty, and ended up requesting a second, larger portion to go. I was shocked when he put in a second order, but he said it was one of the best soups he’d ever tasted.

If you’re in town, it’s worth a stop. The beer is decent and the soup outstanding (per Stephan; they had no vegan options). Ska is also dog friendly, so you can bring your pup and grab a cute little nook outside. 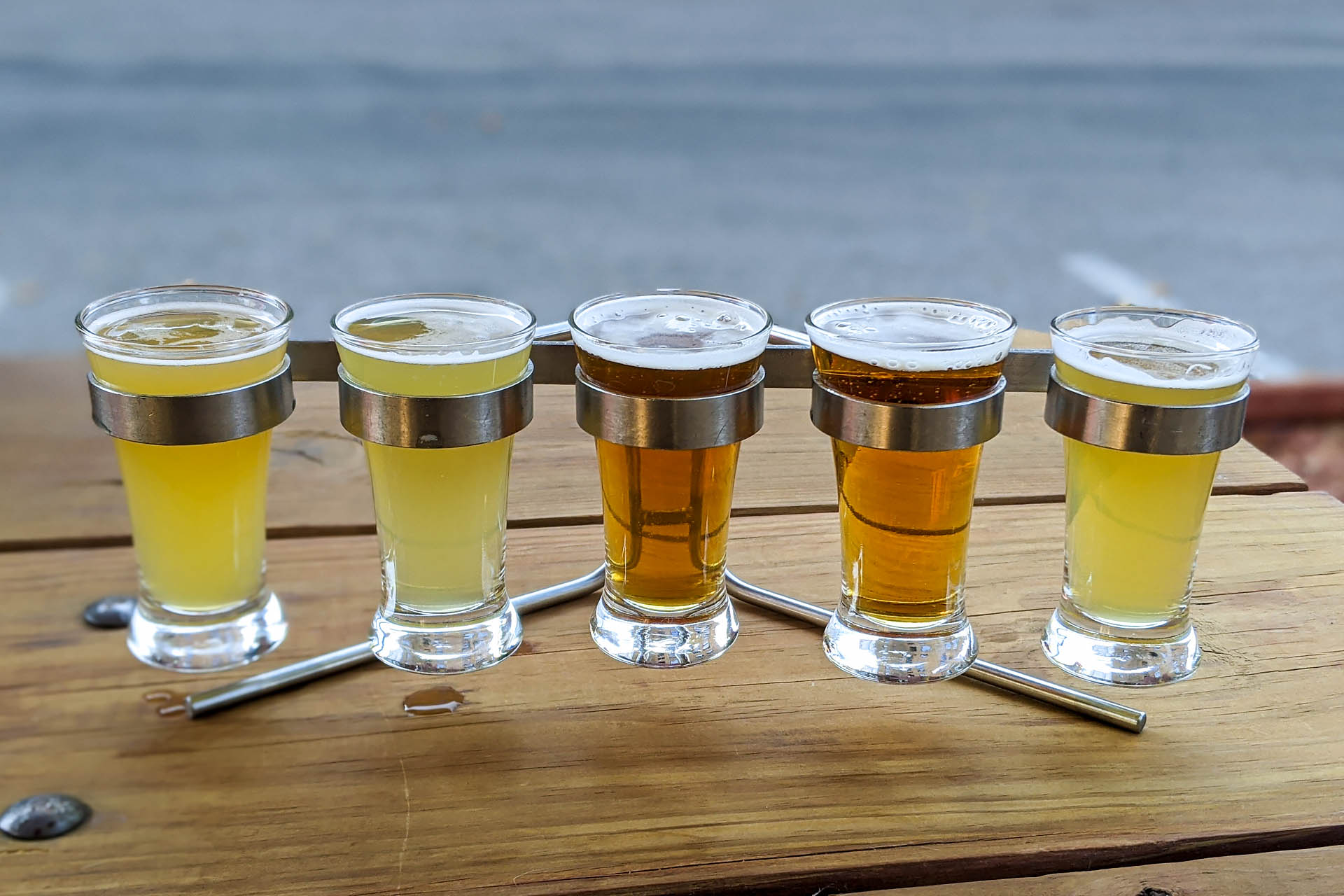 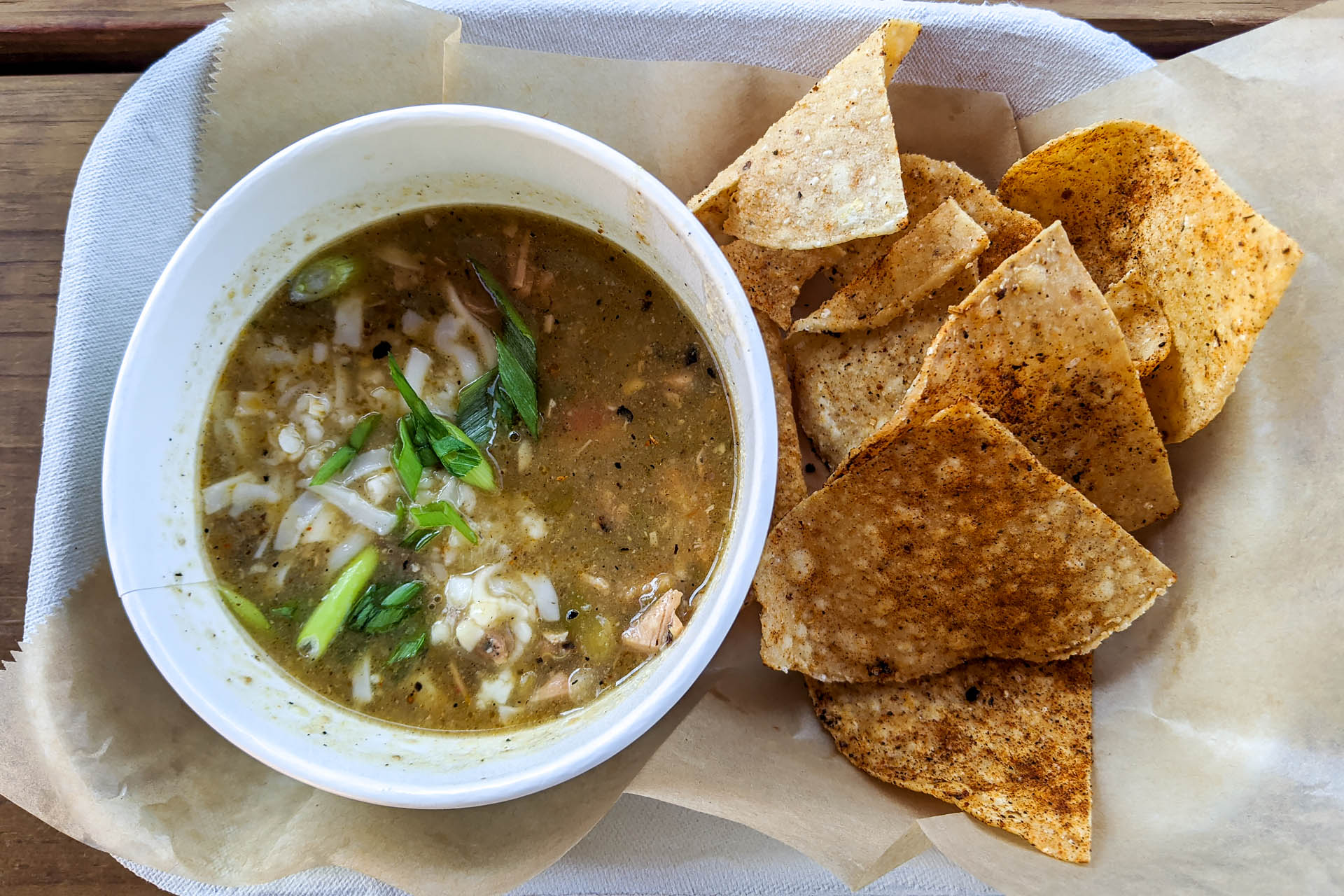 When we visited, we sampled the Nugget Fresh-hop Pale Ale, Sultan of Stoke IPA, Conductor Imperial IPA, Backside Stout, Lizard Head Red, and Prescribed Burn. The Prescribed Burn was interesting – a German ale made with habanero, poblano, and green chilies – and we were impressed with the flavors they achieved in the beer. Moreover, the Sultan of Stoke was awesome, and was easily our favorite brew in downtown Durango. 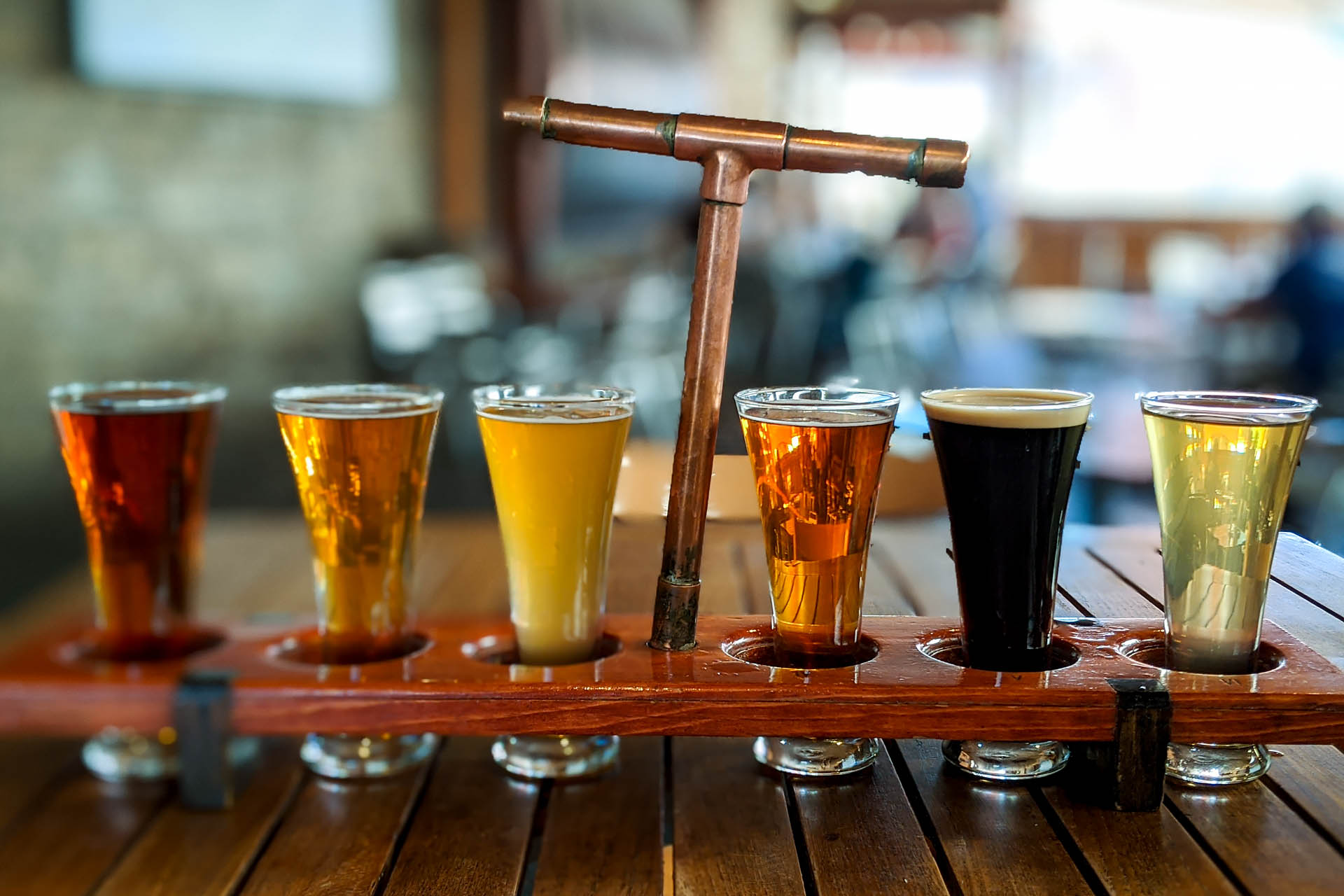 Located on Pagosa Spring’s diminutive downtown strip, Riff Raff has a unique claim to fame in that it’s Colorado’s first craft brewery to use geothermal power. Pagosa Springs is home to the world’s deepest geothermal hot spring at just over 1,000’ deep. Riff Raff takes advantage of this local resource to heat its facility and also to boil water for their ‘Earth-powered’ beers. The geothermal power is extremely energy-saving, helping to quickly preheat tap water to 137°F before boiling (it would normally come out of the faucet at around 37°F in the winter months).

With only a small selection of beers and one IPA on tap, Stephan ordered a pint of their Hopgoblin IPA, a west coast style brewed with Cascade, Centennial, and Chinook hops. He also snagged a small taste of the El Duende Green Chili Ale. For this beer, they add a generous amount of Anaheim peppers directly into the boil, resulting in a pepper flavor without any of the heat. While we found both beers to be kind of average, we applaud their unique, environmentally-friendly approach to brewing. 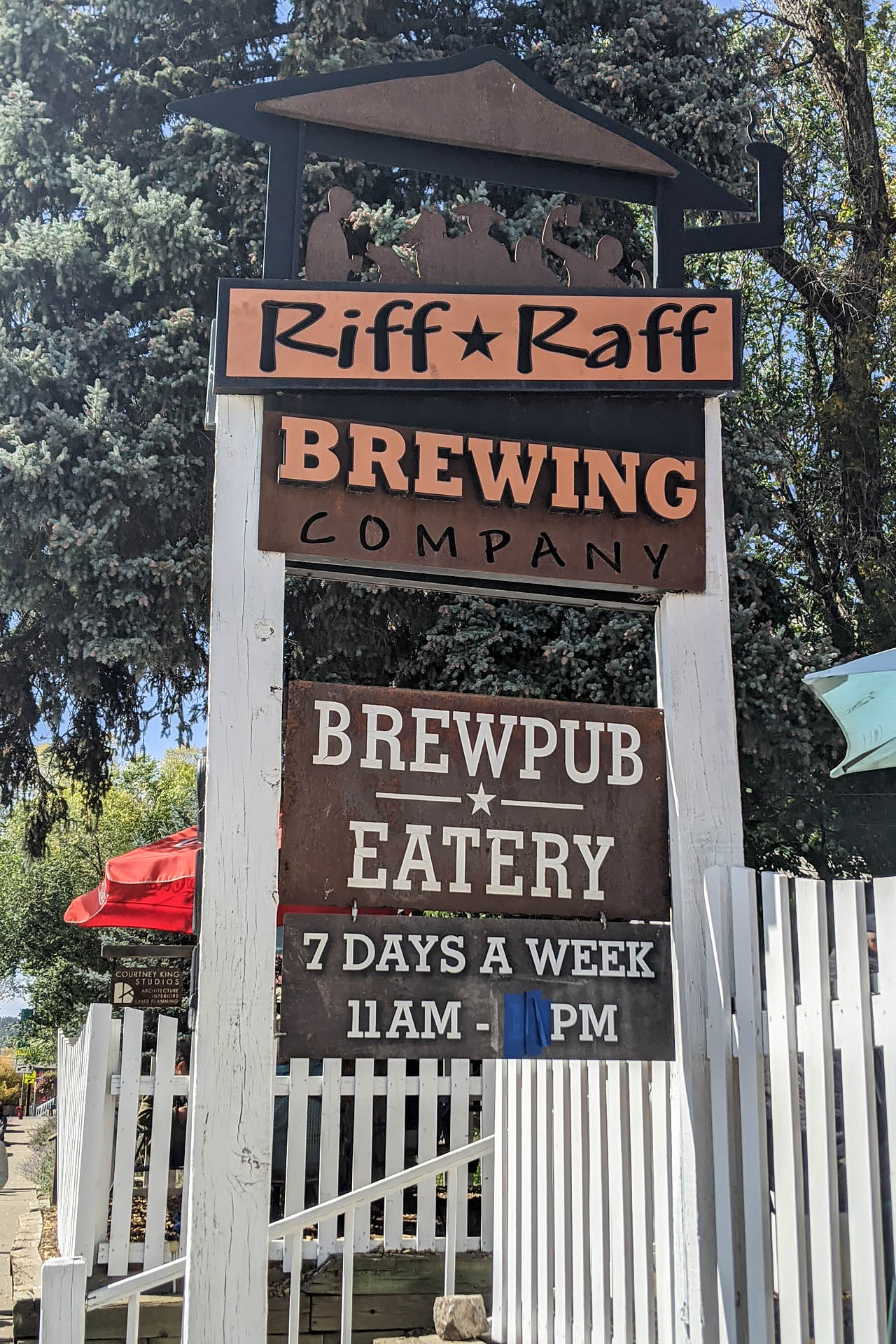 Of the four breweries we visited in the San Juan region, Telluride Brewing was hands down our favorite. The brewpub is located in Lawson Hill, a planned, mixed-use community just off Highway 145 between Telluride and Mountain Village. While it’s a few miles west of Telluride’s charming downtown, it’s easily accessible if you’re passing through via the scenic San Juan Skyway.

For the hop lovers out there, Telluride Brewing’s beer menu is staggering, with an enormous selection of core beers, seasonal releases, and limited-edition brews. When we visited, there were some 20 beers on tap, many of those IPAs or hazy IPAs. Better still, at least a dozen of those were available to go in 4-pack cans.

The only minor disappointment was that there were no flights when we visited. We’re not sure if this is typical or if it was a pandemic precaution. The brewery was clearly being extra careful to maintain COVID compliance, with no indoor seating, well-spaced tables outdoors, and even a card table set up outside for payment and pickup. Having been on the trail all day, we grabbed the most isolated table we could find and sat down with a couple of beers and some carryout from the fantastic little restaurant next door, Aemono Fine Foods (https://www.aemonofinefoods.com/).

Stephan tried their Galloping Juice IPA #5 while I grabbed a pour of the Move Me Brightly IPA. Both were really delicious and convinced us to grab a 4-pack so we could sample another brew back in Durango. We ultimately settled on the Tempter IPA, which also did not disappoint. If you’re in the area and looking for some great beer, check out Telluride Brewing. The beers are fantastic, the staff is friendly, and you can even grab a bite to eat at the impressive little (vegan-friendly) eatery next door.

If you’re visiting the San Juan region, you won’t have trouble finding some interesting and inviting microbreweries. While we weren’t consistently blown away by all the beers, we always had great service and a pretty cool ambiance. That said, Telluride Brewing had some awesome brews, and we’d definitely frequent their brewpub for their numerous seasonal and limited releases if we lived in the area.