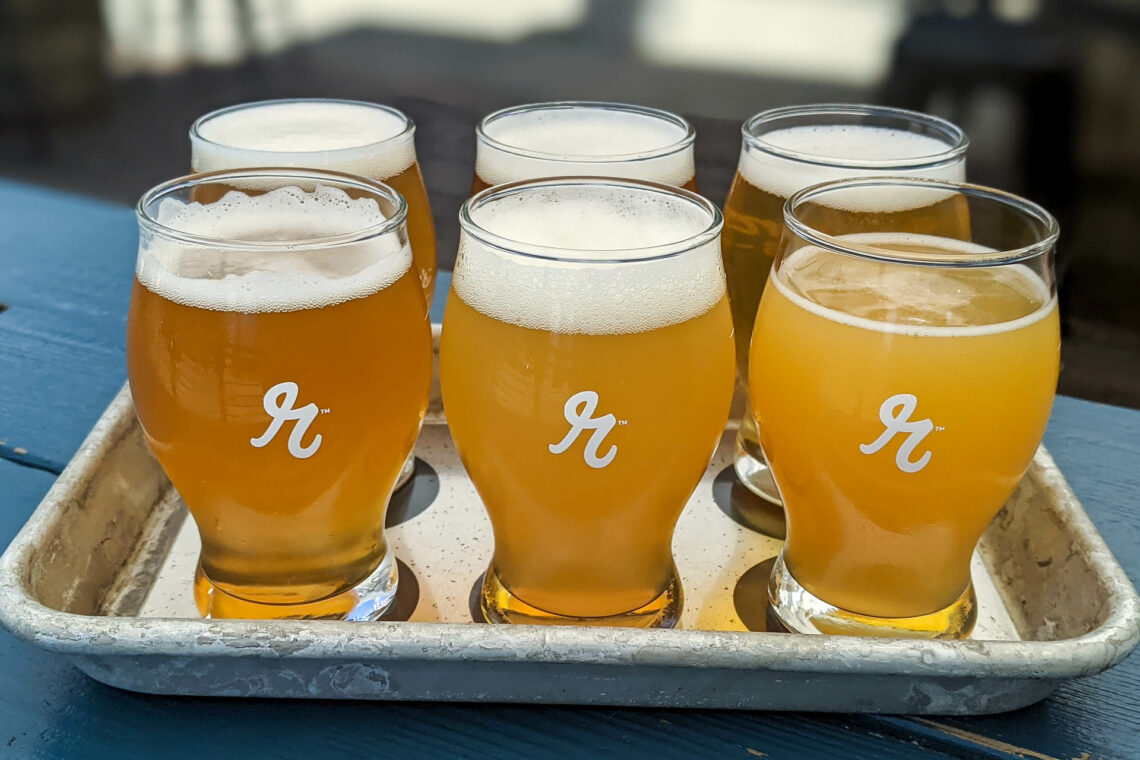 Quite possibly one of the best craft beer cities in the country, Seattle is a great place to visit if you’re looking for great brews. With the hop capital of the world just a couple hours southeast and dozens of innovative craft breweries peppering the metropolis, it doesn’t get much better than this PNW haven.

As you scroll through the list, you may quickly notice that most of our favorites happen to be in Ballard. This seaside neighborhood has a super cool industrial feel, and has seen an explosion of craft breweries in recent years. The Ballard Brewery District is the perfect little oasis for beer enthusiasts: good location, great beer, tons of street parking and walkability, a sea of rotating food trucks, and a sense of community amongst the breweries. If you have just one day in Seattle to explore the beer scene, head straight for Ballard.

During our three-month stay in the Seattle area, we made it to a dozen breweries – a good sampling, but really just a drop in the bucket. But since we love to share our favorites with fellow hop enthusiasts, we’ve put together this list. We took the twelve taprooms we visited and sorted them into The Best and The Rest. Our favorites tended to have nice outdoor areas (a pandemic must), and tap lists skewed toward IPAs (our preferred style). No matter your taste or what neighborhood you visit, though, you’re sure to uncover some great beers in the city. For more about our top picks, read on!

If you love IPAs, Stoup Brewing should be near the top of your Seattle must-visit list. The brew pub quickly became one of our favorite spots in Seattle, and we found ourselves regularly going back during our summer-long stay in the city.

Located in the aforementioned beer hub of Ballard, Stoup has a fantastic outdoor beer garden (dog-friendly, of course) and an extensive list of regular and rotating IPAs. They also welcome food trucks daily, and you can check out their online calendar to see who’ll be serving up grub alongside their spacious patio. We liked pretty much everything we tried here, but the Know Better Do Better, Rainbow Bubbles, Sandals & Flannels, and Vibe Check IPAs were exceptional.

Bonus: If you’re looking to do a little pub crawl around some of Seattle’s best breweries and food trucks, Urban Family is right across the street and Reuben’s is just around the corner. 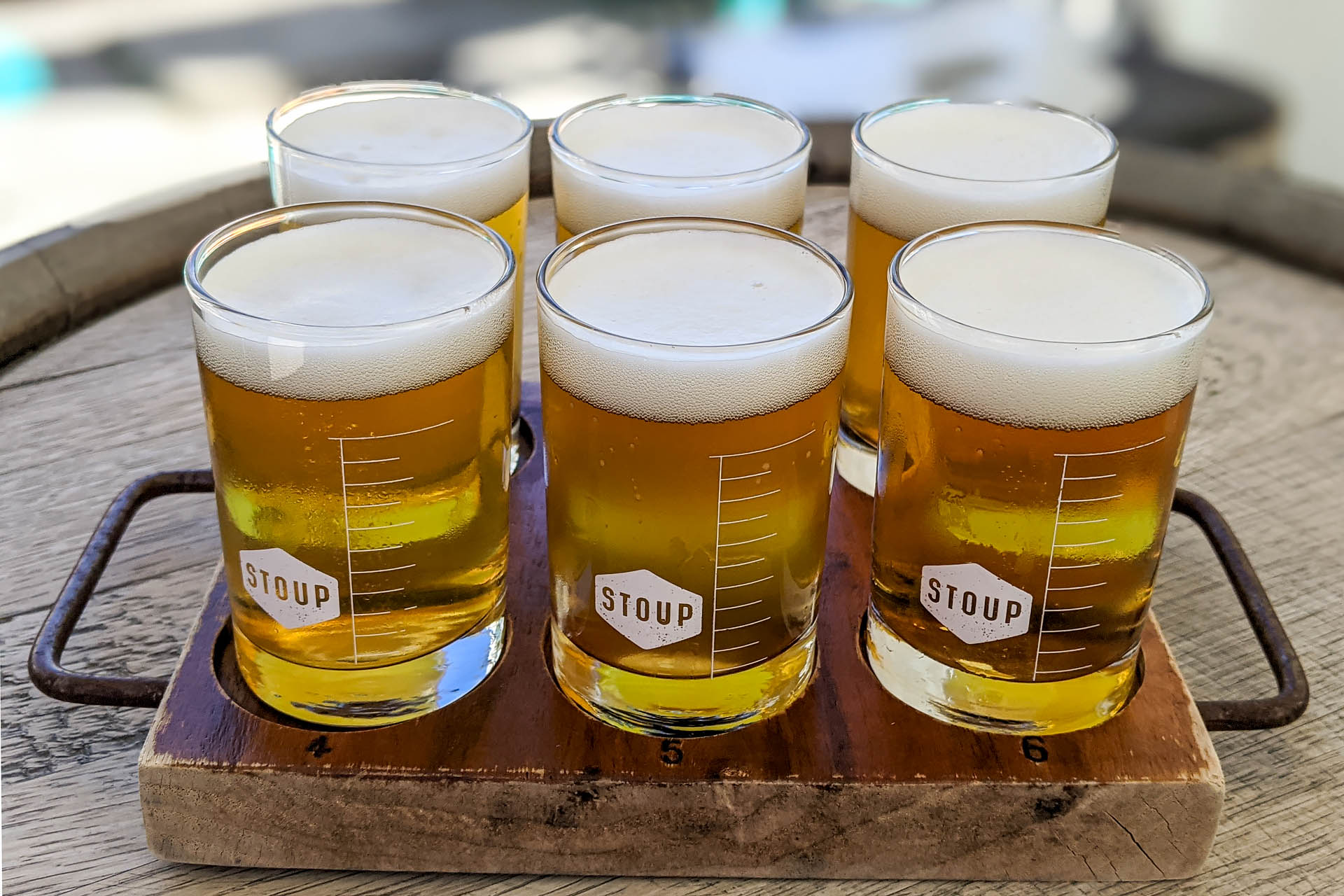 Just across the street from Stoup, Urban Family serves up some seriously good beer in a super cute space. There’s a large, dog-friendly patio with plenty of shade, and lofty ceilings make the taproom’s interior feel really spacious. Similar to their neighbor, Stoup, Urban Family also publishes a monthly calendar with an equally impressive lineup of rotating food trucks.

If you’re into hoppy and juicy IPAs, Urban Family is a great place to check out. They had a half dozen hop-forward brews on tap when we visited, and an assortment of cans in the fridge. Our favorites included the Gamebreaker and Continency IPAs. If sours are more your jam, there was an even larger selection of farmhouse-style brews than IPAs. Some of their unique fruit flavors included guava, dragon fruit, prickly pear and plum. And while they did have a few other styles on draft, IPAs and sours seem to be their wheelhouse. 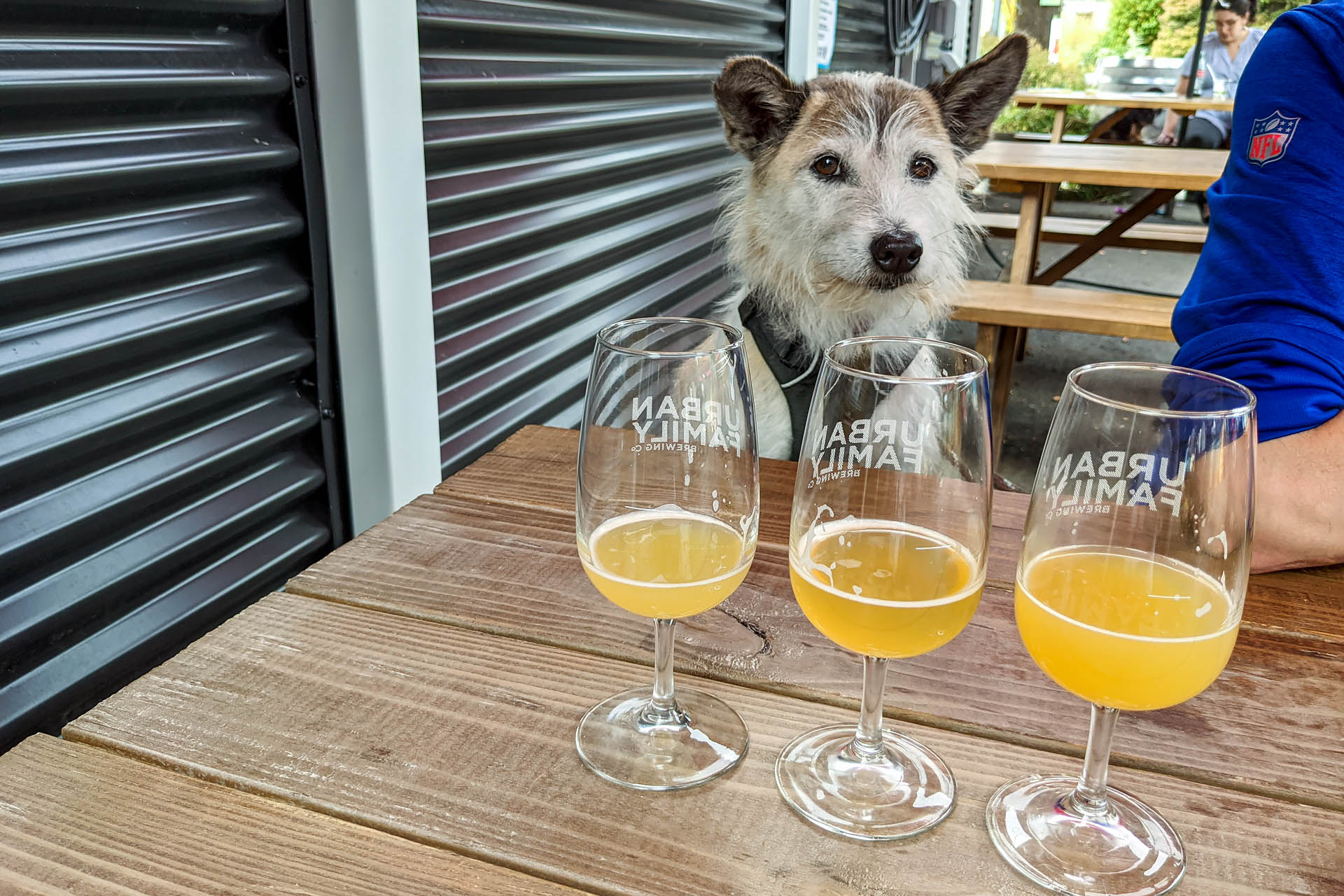 A neighborhood with a true industrial feel, Georgetown is tucked away amongst the Duwamish Shipyard, BNSF Railway lines, and King County Airport. It doesn’t look like much at first, but there are actually a fair number of restaurants and bars scattered around the more commercial transportation hub.

For us, Georgetown Brewing was a true diamond in the rough. We weren’t sure what to expect as we drove past dockyards and weaved around railroad tracks, but it ended up being one of our favorite breweries in the city. The taproom is really beautiful with a hip, industrial vibe and large garage doors that open onto a cozy outdoor space. They’ve got some great IPAs and the staff are incredibly friendly. Our top picks here were the Bodhizilla DIPA, Warchild IPA and July IPA, with the first two being a couple of our favorite IPAs in Seattle. If you find yourself exploring a bit further south of downtown, be sure to check these guys out. 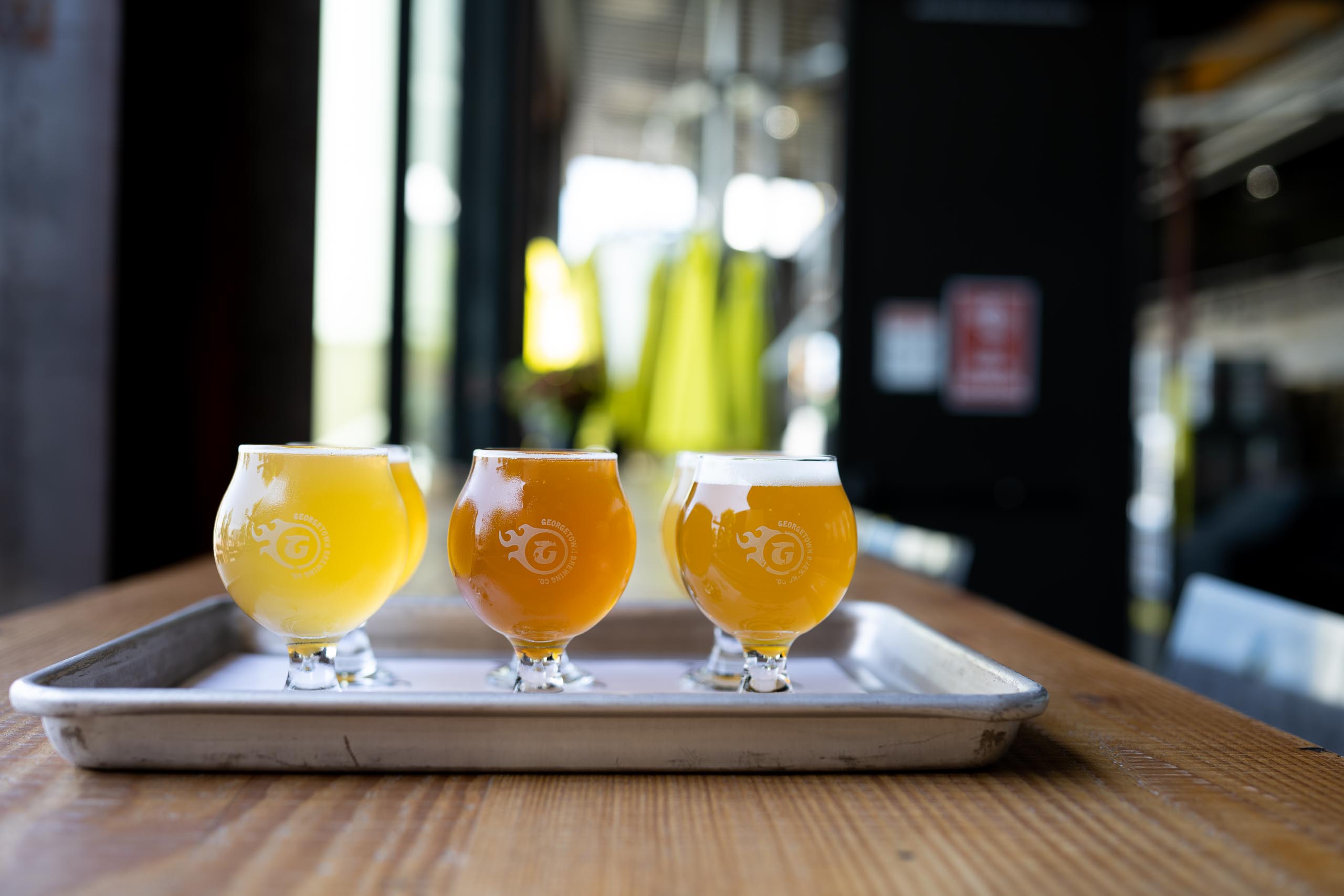 Brewing since 1996, Elysian is one of the more established and larger of Seattle’s craft beer producers. Now owned by Anheuser-Busch, it’s pretty easy to find their bottles on shelves across the country. That said, it’s still a cool brewery to visit that’s serving up some good beers.

Given my dad’s fondness for Elysian’s Space Dust IPA – something he can regularly find on the shelves in smalltown NH – we had to stop by the brewery when he came out to visit. We enjoyed a beautiful afternoon on their small patio area and sampled eight of their hoppiest offerings. Much to my mom’s delight, they also offered a selection of wine. Of the beers we tried, the Contact Hazy and Immortal IPA stood out the most, though we all still seemed to favor the Space Dust. This one may be bit more commercialized than the others on this list, but it was nice to try some of the IPAs that aren’t available on the East Coast… and it was a great stop with my dad. 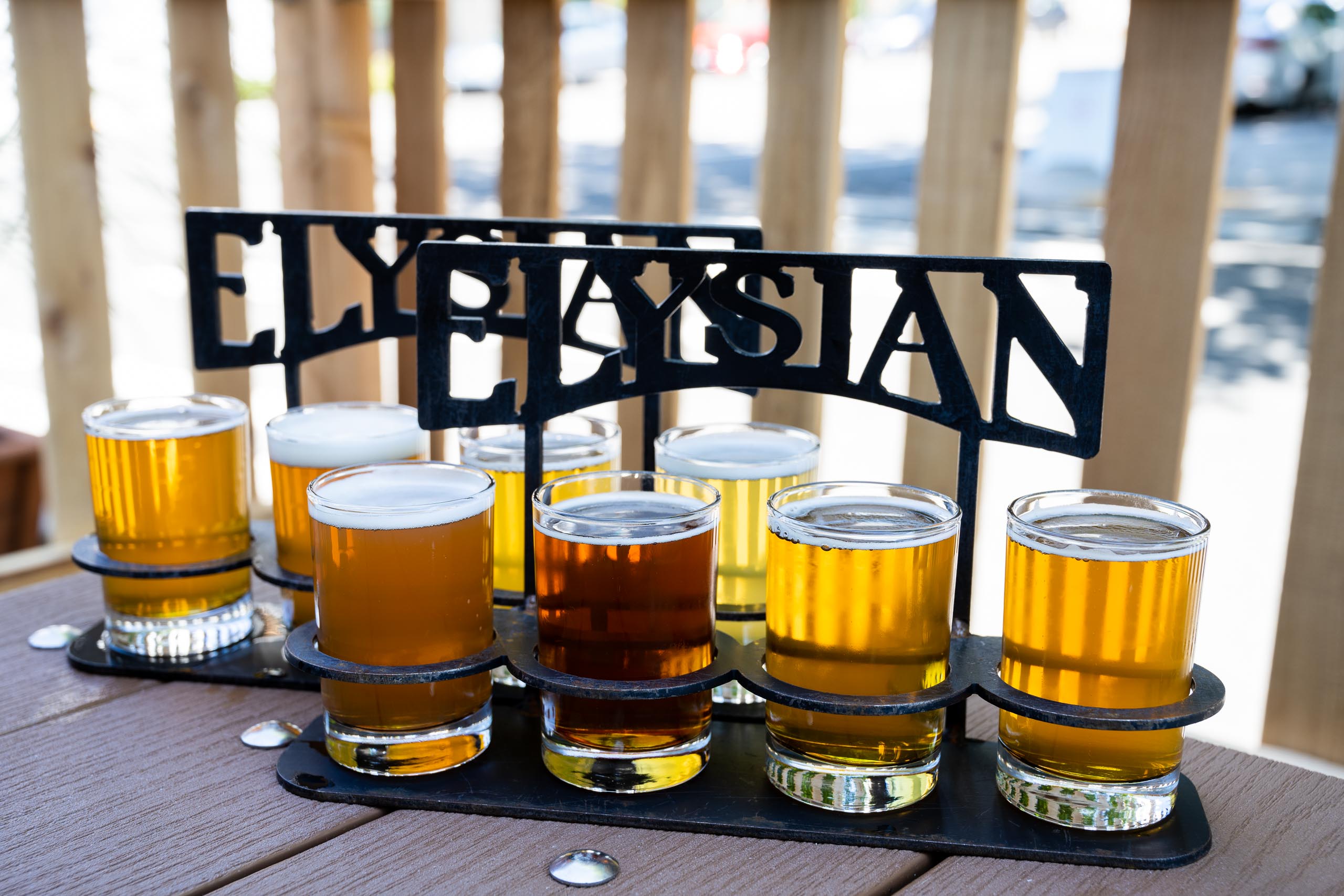 Back in the beer mecca of Ballard, Reuben’s Brews is a local favorite. The independent, family-owned brewery is named after the brewer’s first child, and celebrates a decade in business in 2022. Importantly, the brewers are committed to serving the community, having launched their Reuben’s Brews Foundation in 2020. The program has raised over $150,000 for local non-profits, including environmental, educational, and social justice programs.

I visited Reuben’s twice during our stay – once with my dad and once with Stephan – and both times the place was jumping. Like Stoup and Urban Family, Reuben’s also plays host to a rotating parade of food trucks, and offers ample shaded outdoor seating. If you’re a hop lover, Reuben’s offers a pretty impressive selection of IPAs, including their core lineup, an assortment of seasonal IPAs, and their Crush Series – an ever-changing cast of Hazy IPAs. Our favorites from the bunch included the PNW Crush and Mind The Gap! IPA. The most interesting one we tried was probably their POG Hazealicious (passionfruit, orange, guava). I don’t think I’ve ever had a beer that tasted that much like sucking on a passionfruit. It leaned a little towards a sour for me, but it was definitely a unique one to sample. If you’re exploring Seattle’s craft beer scene, Reuben’s feels like another must-visit. 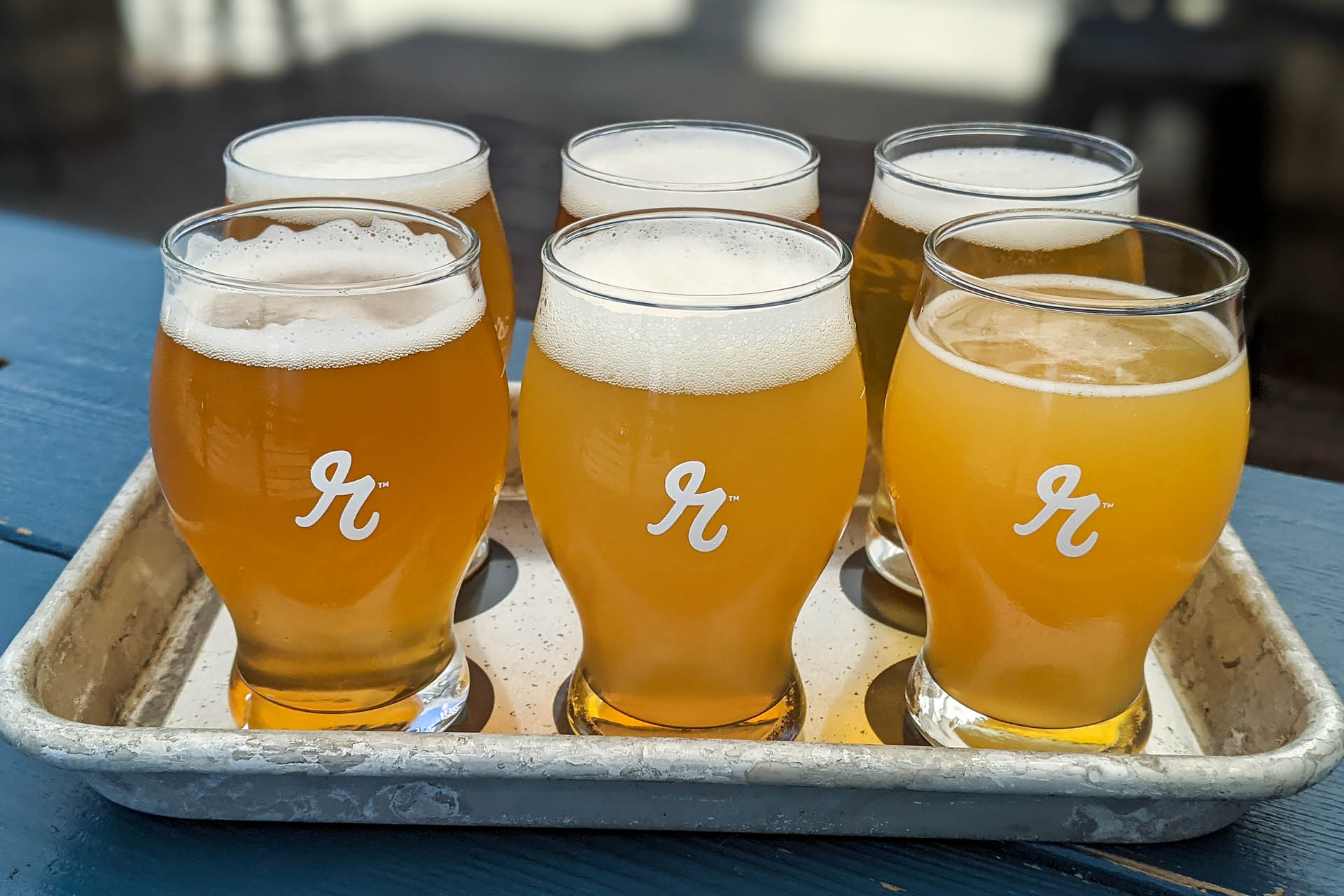 Okay, this one’s a bit outside of Seattle, but it’s still a really good brewery and restaurant. About 40 minutes north of downtown, in the suburb of Snohomish, Sound to Summit is a great option for those staying further north of the city. Since our AirBnb was just a couple miles up the street, we had to check this one out.

I have to say, we were pleasantly surprised. Not only was the beer really solid, but the food was exceptional. We enjoyed the beers so much that it was the first place we took my parents when they came out to visit. After another diner recommended the fish and chips, Stephan made sure to order it upon our return visit. My parents were equally impressed with their fish baskets, and the Apex West Coast IPA, Talus Slope Hazy and Trident Hazy were on point. If you find yourself wandering the northern suburbs, we definitely recommend a stop in Snohomish. 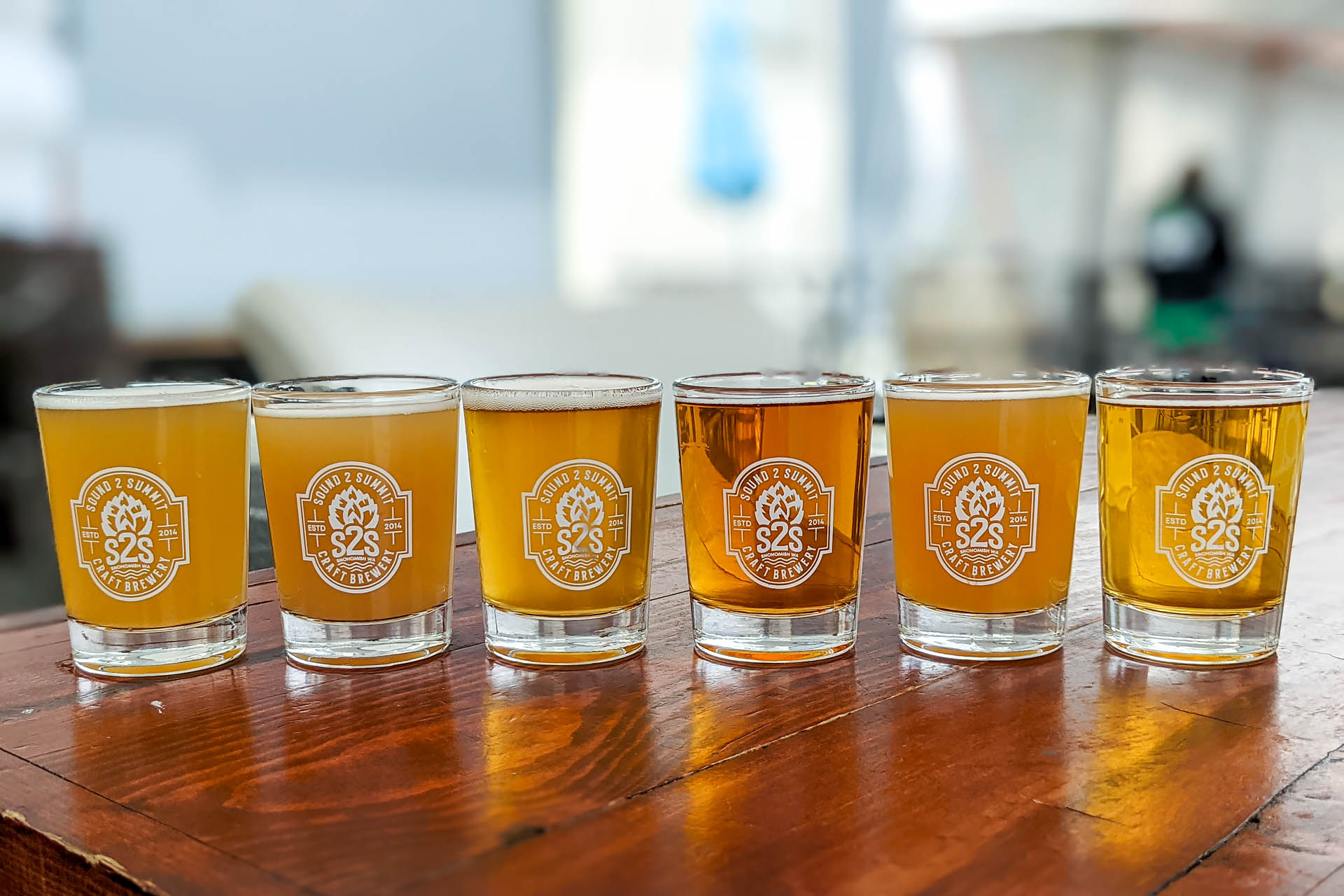 Hops & Seed may be one of the Puget Sound area’s smallest and least-known nanobreweries. It was born during the pandemic, a product of one of JM Cellars’ long-time, beer-loving employees. You can find the brews on tap at The Vault in Maltby, about half an hour north of Seattle and just ten minutes from Woodinville – the area’s premier wine-tasting destination.

We actually discovered the beers when we visited JM Cellars for a wine tasting, and were pleasantly surprised. There are just a few offerings on tap, but we think it’s well worth a visit. Our favorites included the Valley Nights IPA and Brewers Brunch Coffee Porter – a total shock for me, as I am usually not a porter (or coffee) fan.

If you’re more into wine than beer, JM Cellars is also a fantastic spot for a nice glass of red. We were really fond of a number of their red vintages, and again found ourselves making return visits. Overall: The tasting room is stunning, the staff are super friendly, and there’s a small selection of appetizers to pair with your beverage of choice. Whether you’re into wine or beer (or both), this was another of our favorite local spots.

The five breweries that fell a little short for us are listed below. We tend toward big, bitter IPAs – be them piney, juicy, hazy or otherwise – so I think our tastes just weren’t in alignment with the overall beer profiles. That said, all of these breweries seem to get consistently good reviews, so they may be worth checking out if super hoppy isn’t your main criterion: 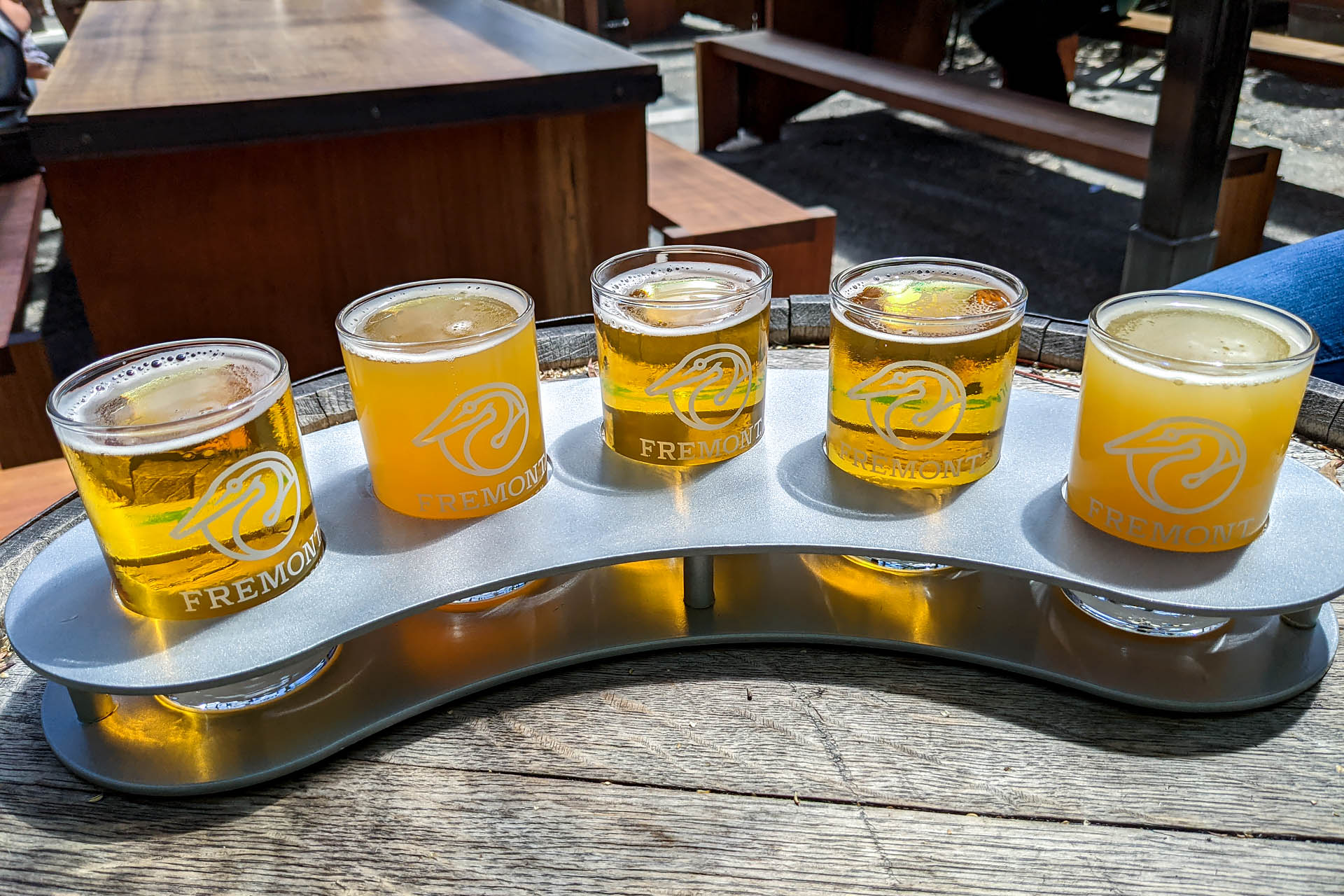 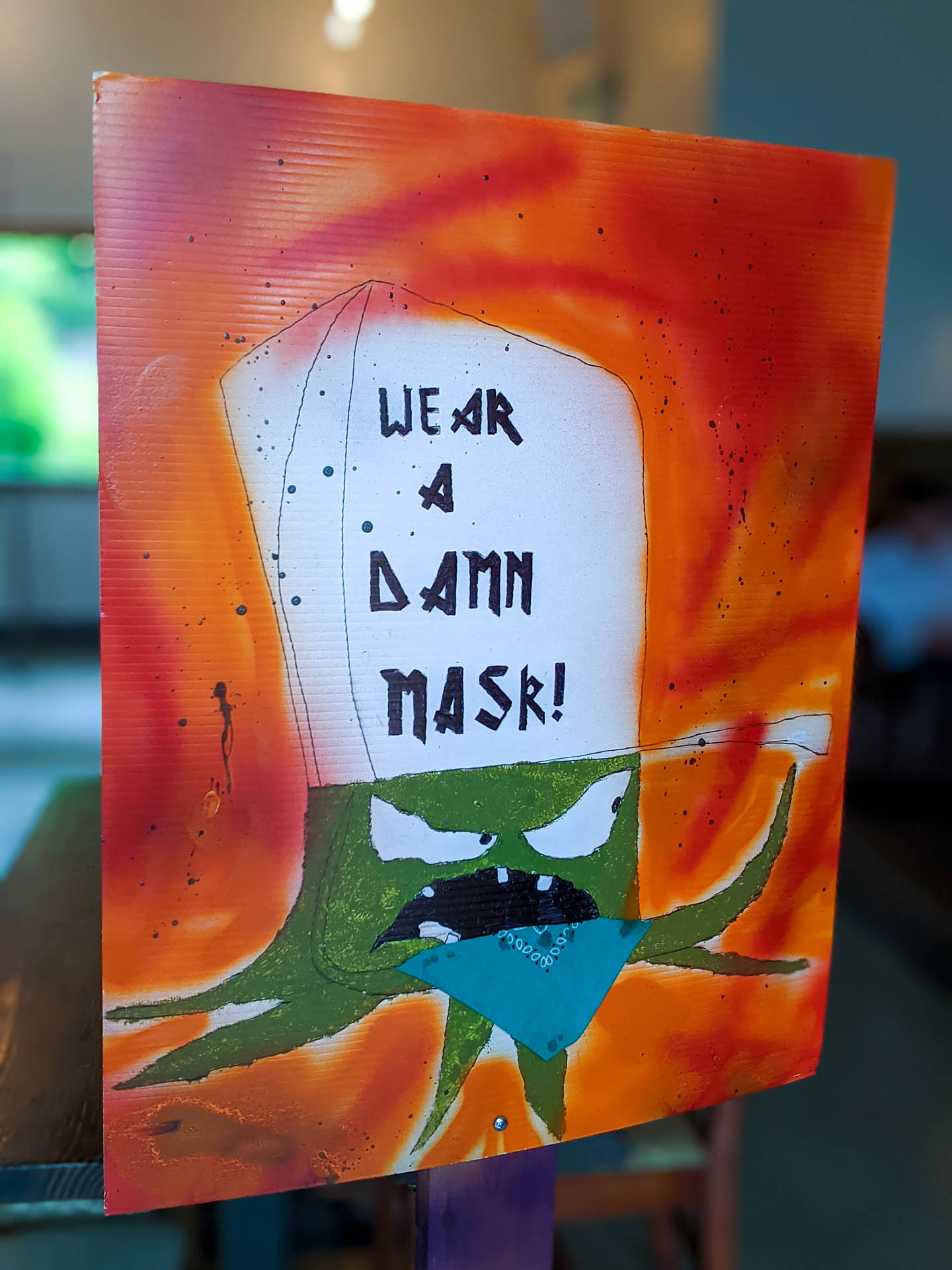 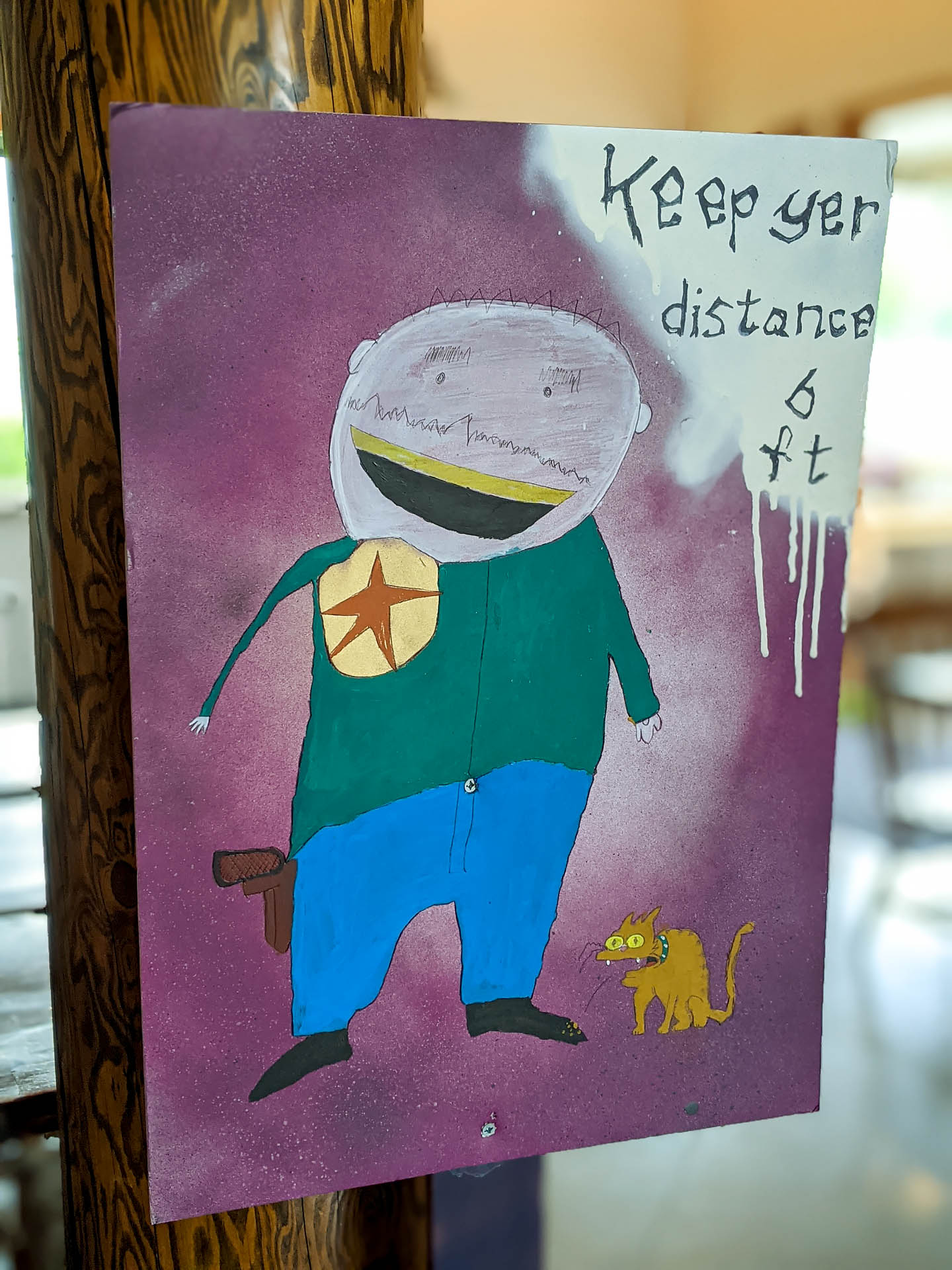 While this list is nowhere near a comprehensive review of Seattle’s massive craft beer scene, hopefully it gives you a good jumping off point for finding some killer hopped-up brews. If you have to start somewhere, we highly recommend heading to Ballard. It’s the coolest little neighborhood and you can just wander around popping into breweries and sampling food trucks. It’s a bold statement, but Ballard just might be the best craft beer microcosm we’ve found yet in our travels around the country. Cheers!