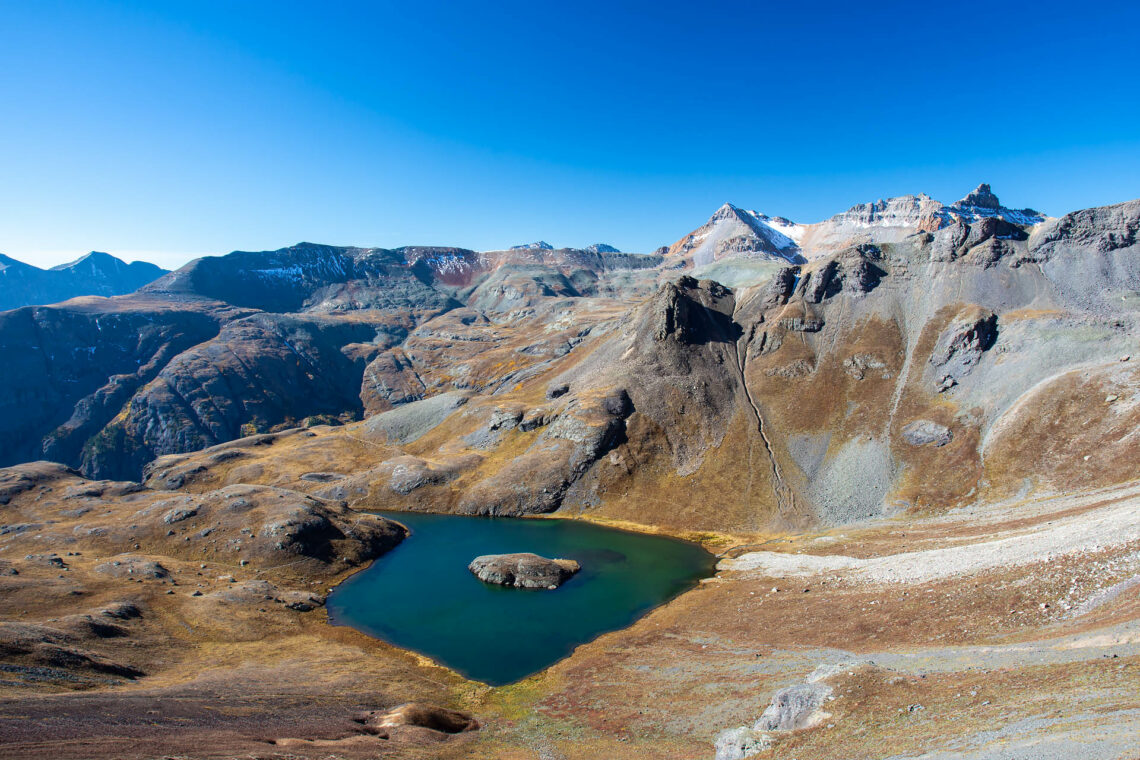 Quite possibly the most recognized route in the San Juan Mountains, Ice Lakes Basin has seen its popularity soar in recent years as it continues to be touted as one of Colorado’s most scenic day hikes. Its beauty and accessibility have led to an increase in foot traffic, making it quite a busy route during peak summer season.

The trailhead for Ice Lakes Basin is just west of Silverton at the South Mineral Campground. The nine-mile stem-and-loop trail leads to a collection of gem-tone alpine lakes – Island Lake, Ice Lake, and an unnamed lakelet just south of Ice Lake. An optional spur also leads over to Fuller Lake, which we didn’t realize at the time, but wish we’d checked out given how spectacular the other lakes were… and given that it’s supposedly less frequented than the highly popular Ice Lake.

We decided to hike the route counterclockwise. From the trailhead, it’s just over two miles to the junction with the loop. The trail switchbacks up the forested hillside, passing Clear Creek Falls, until opening up on alpine meadows about a mile from Island Lake. Upon reaching Island Lake, we were shocked to find ourselves alone. We’d started at a decent hour, but not unreasonably early. The lake was exceptionally striking, and probably my favorite of those we visited. 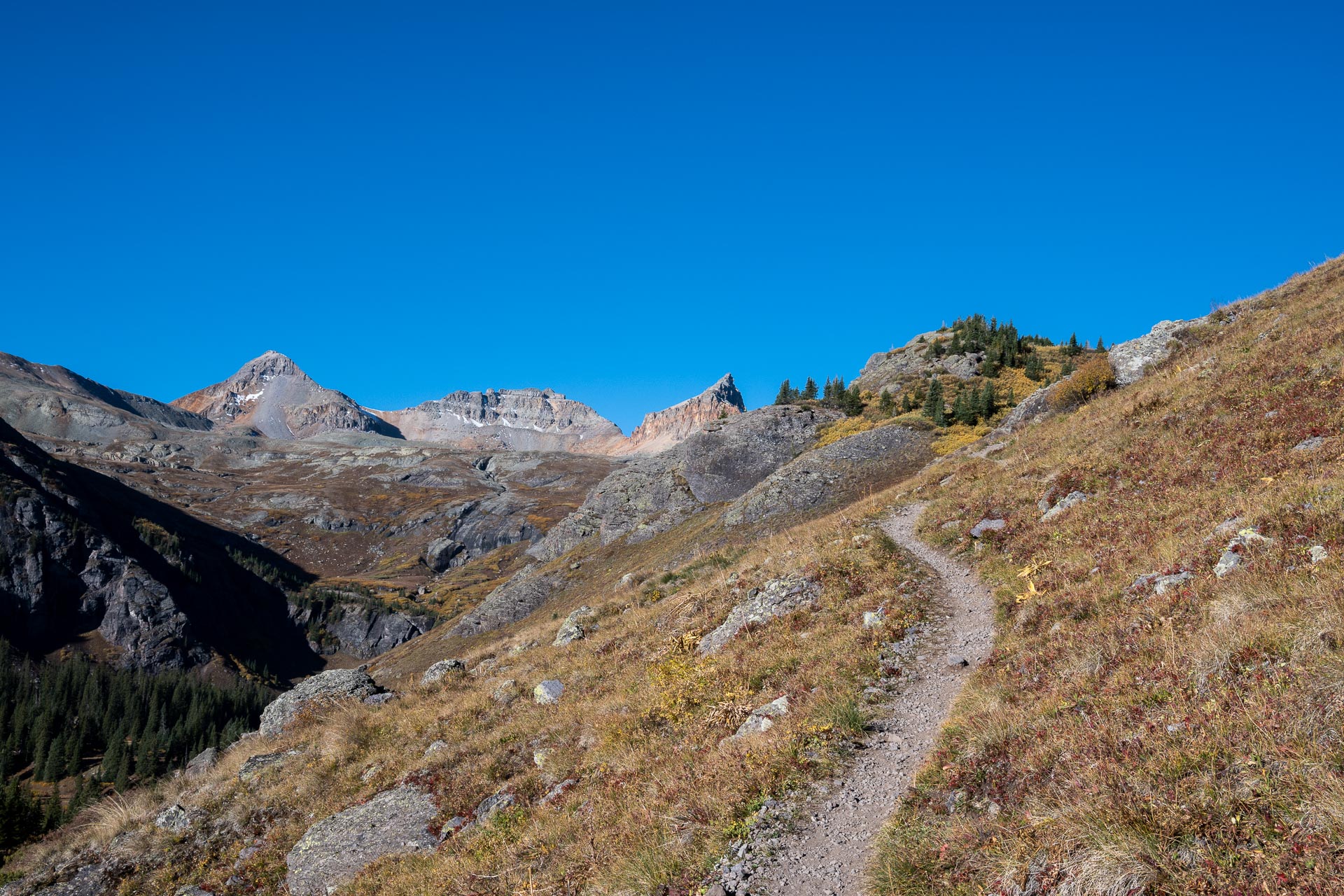 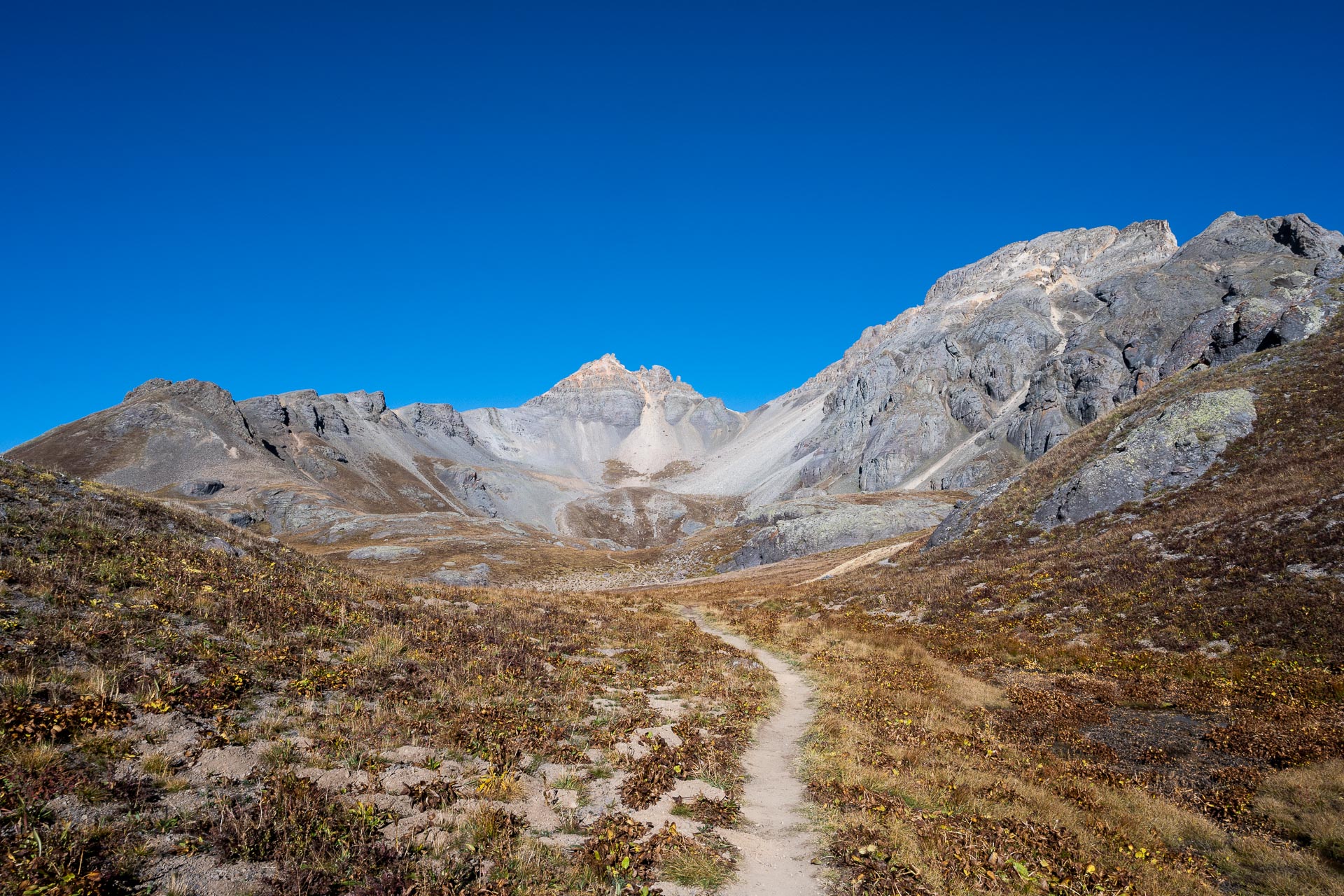 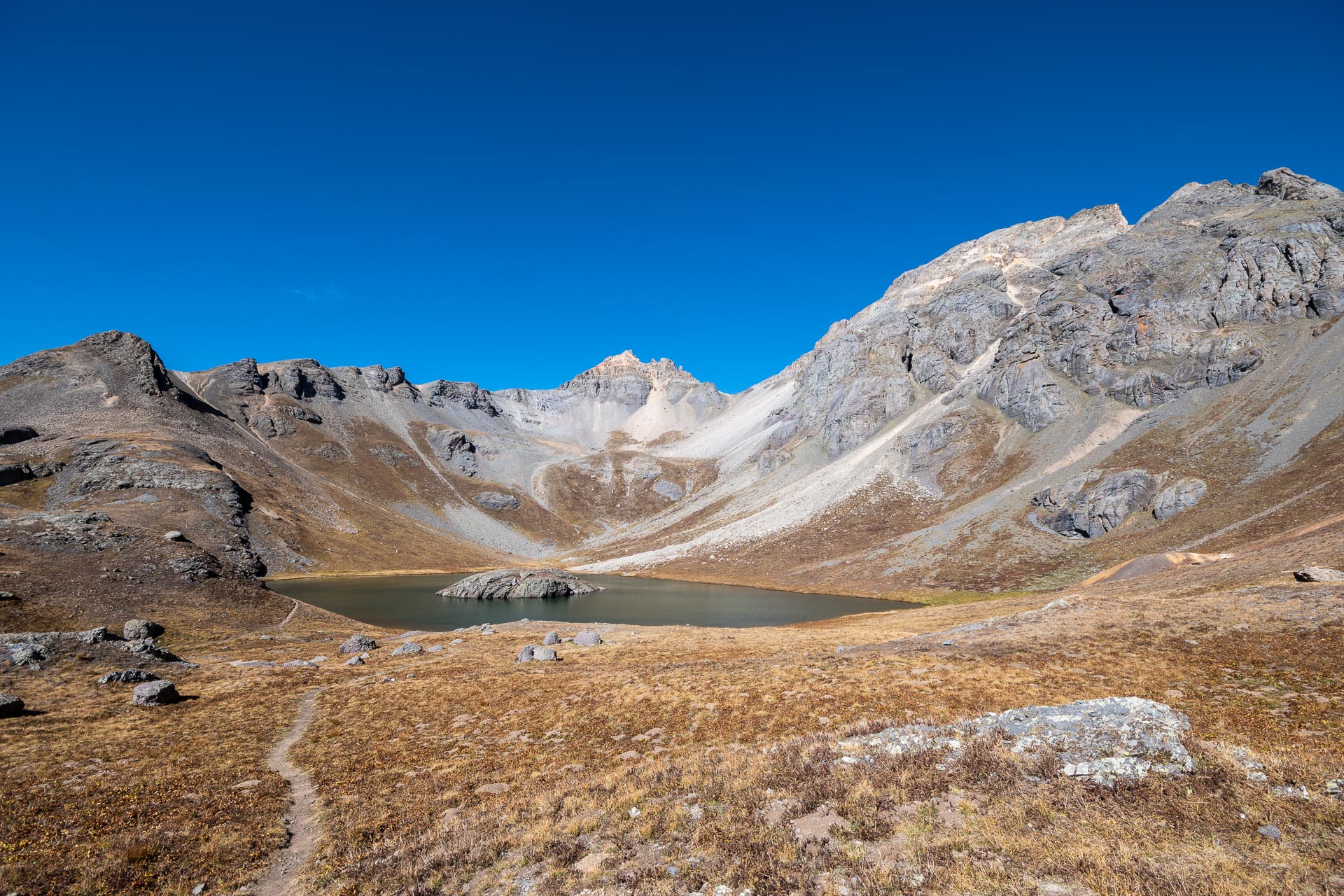 A steeper, more challenging trail just east of Island Lake leads up to Grant/Swamp Pass, a high ridge between two 13ers – US Grant (13,767’) and V2 (13,309’). Wanting to get a bird’s-eye view of the lake, we decided to make the side trip up to the pass. The trail got a little sketchy toward the saddle with a lot of loose scree and dirt, and coming down was like friggin’ ice skating. 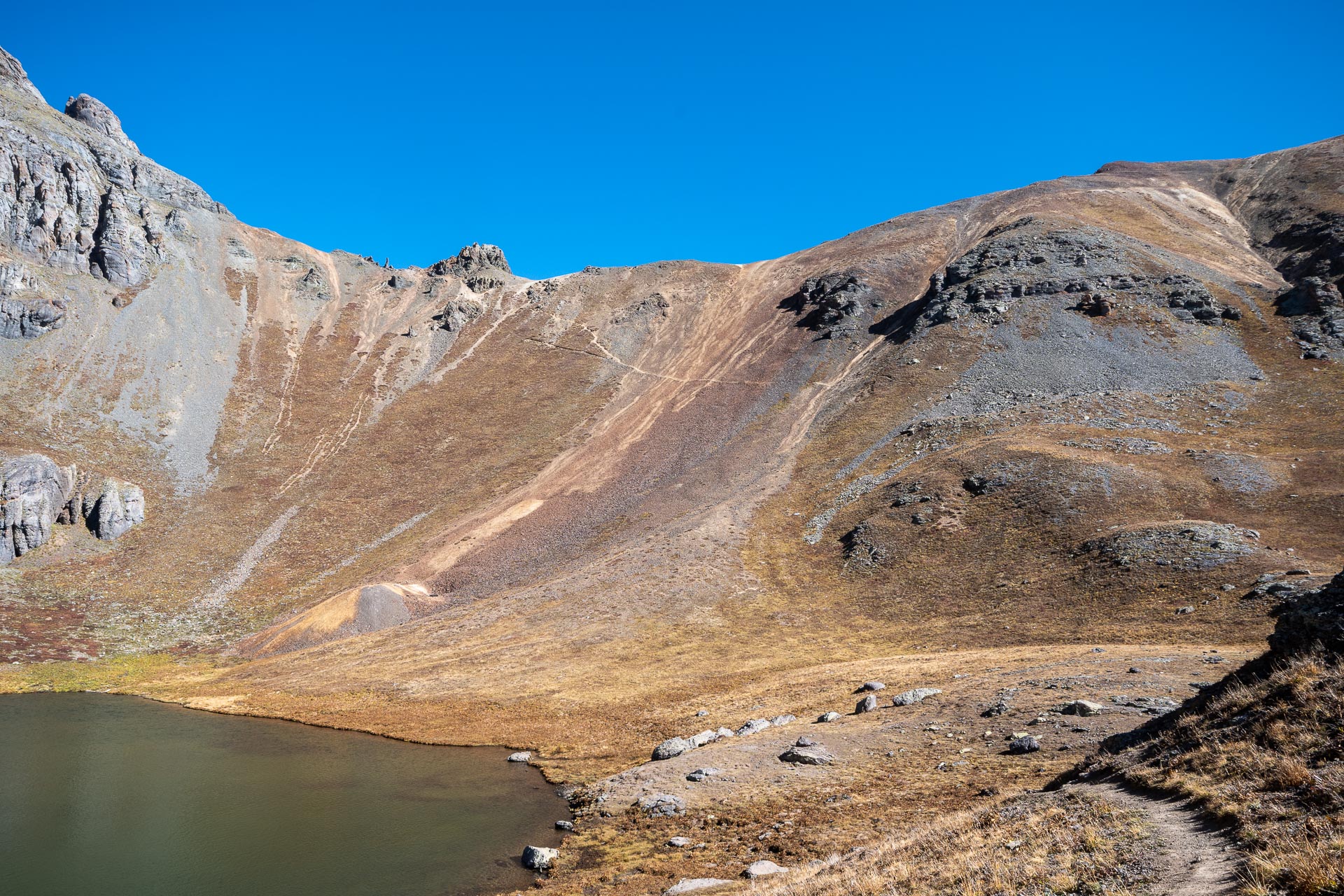 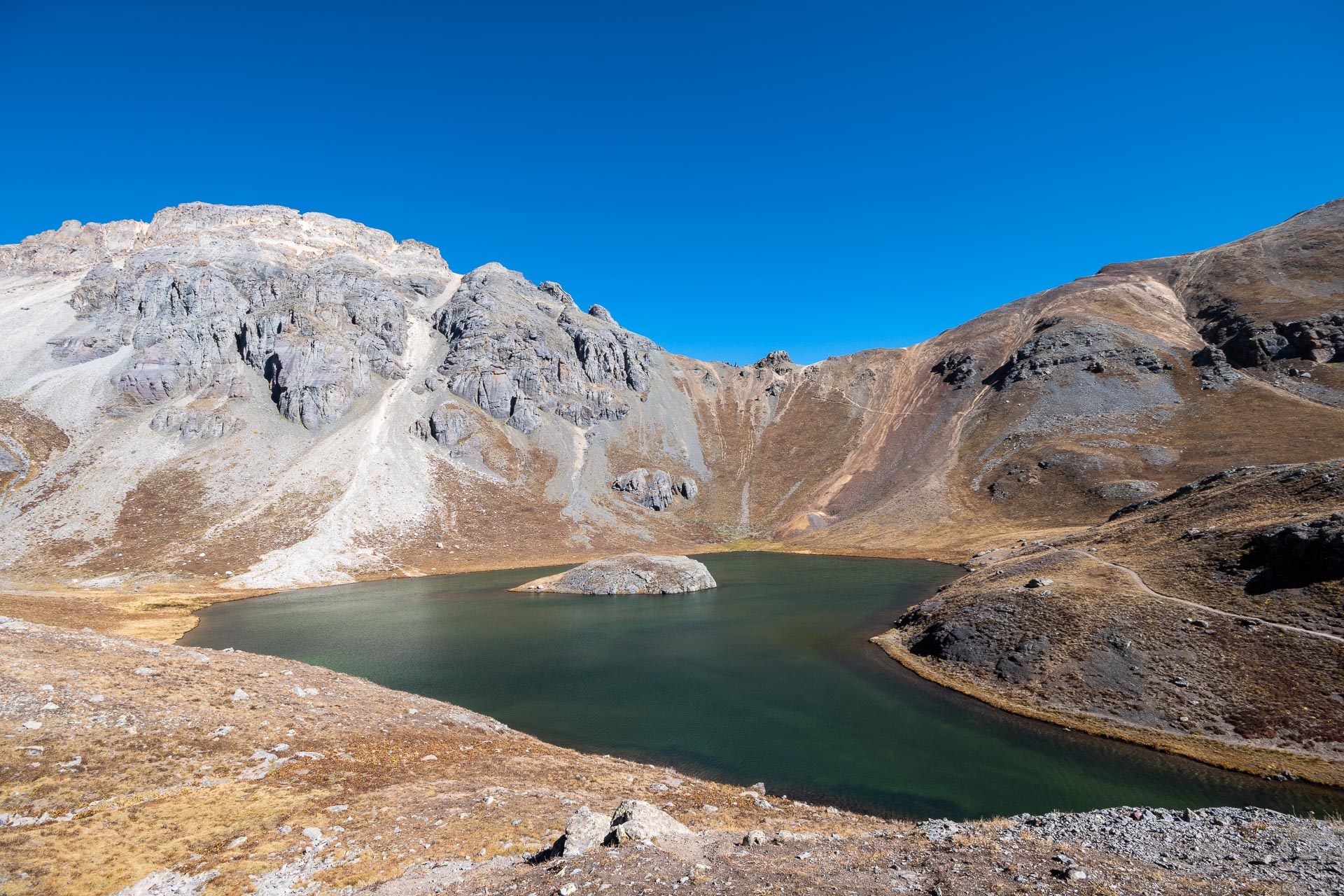 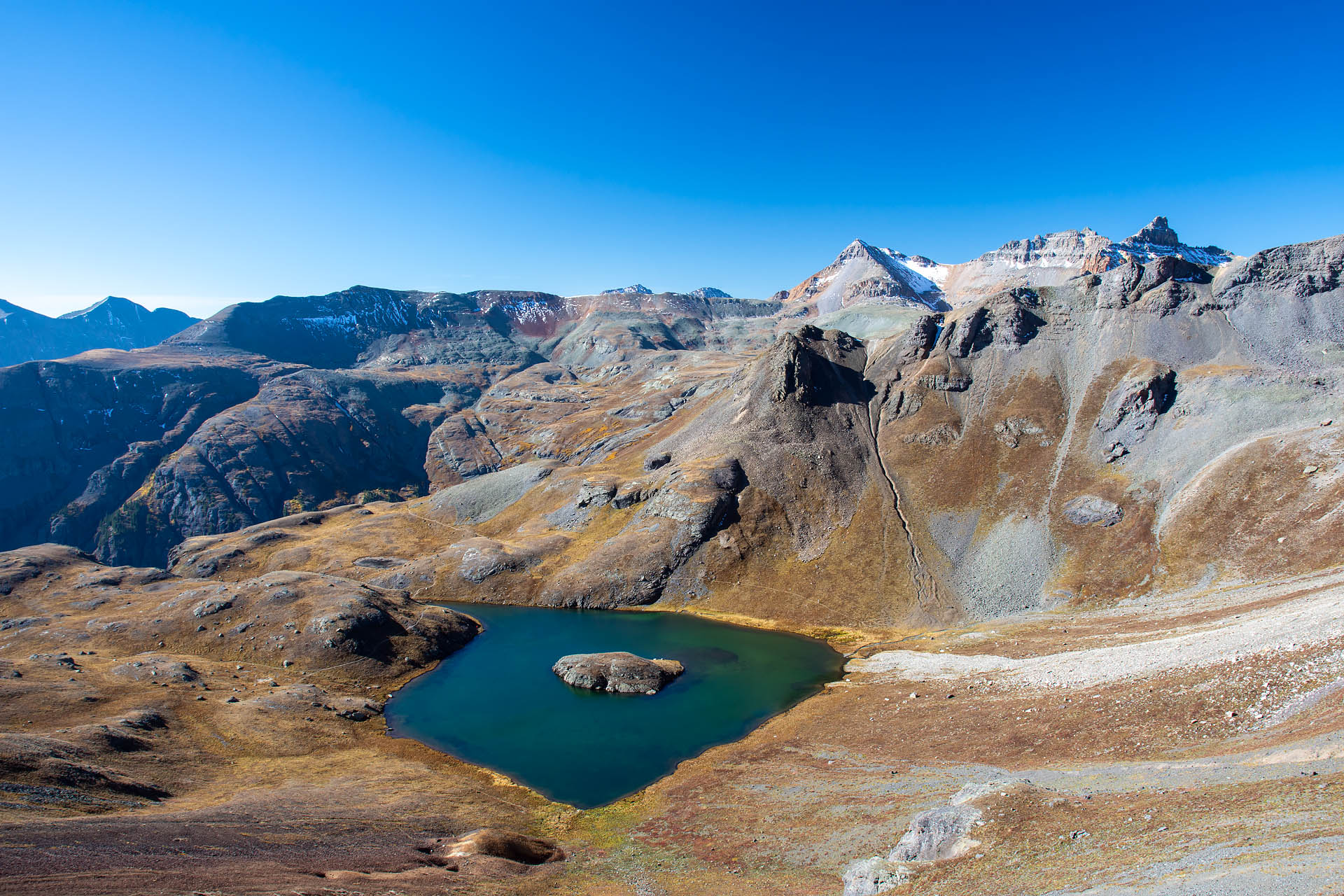 From Island Lake, we continued west to Ice Lake. While there were some people gathered around the lake enjoying an early lunch, it wasn’t overly crowded. We were certainly grateful for that… and surprised given it was such a stunning Sunday in autumn. Ice Lake may be the most surreal looking freshwater I’ve ever seen. The aquamarine shallows around the perimeter was almost blinding, and I think the starkness of the rugged backdrop made the surface appear even more unnaturally blue. 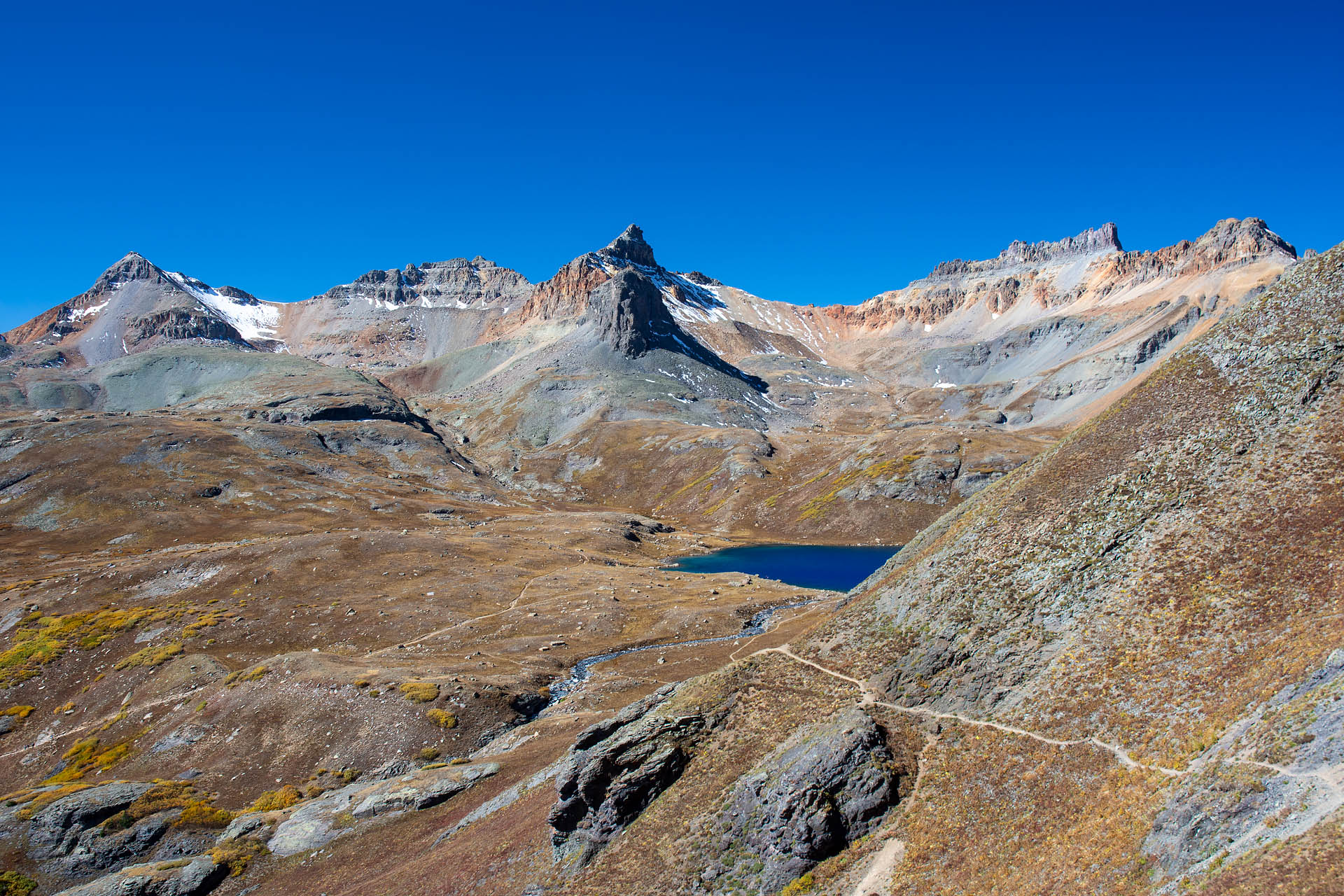 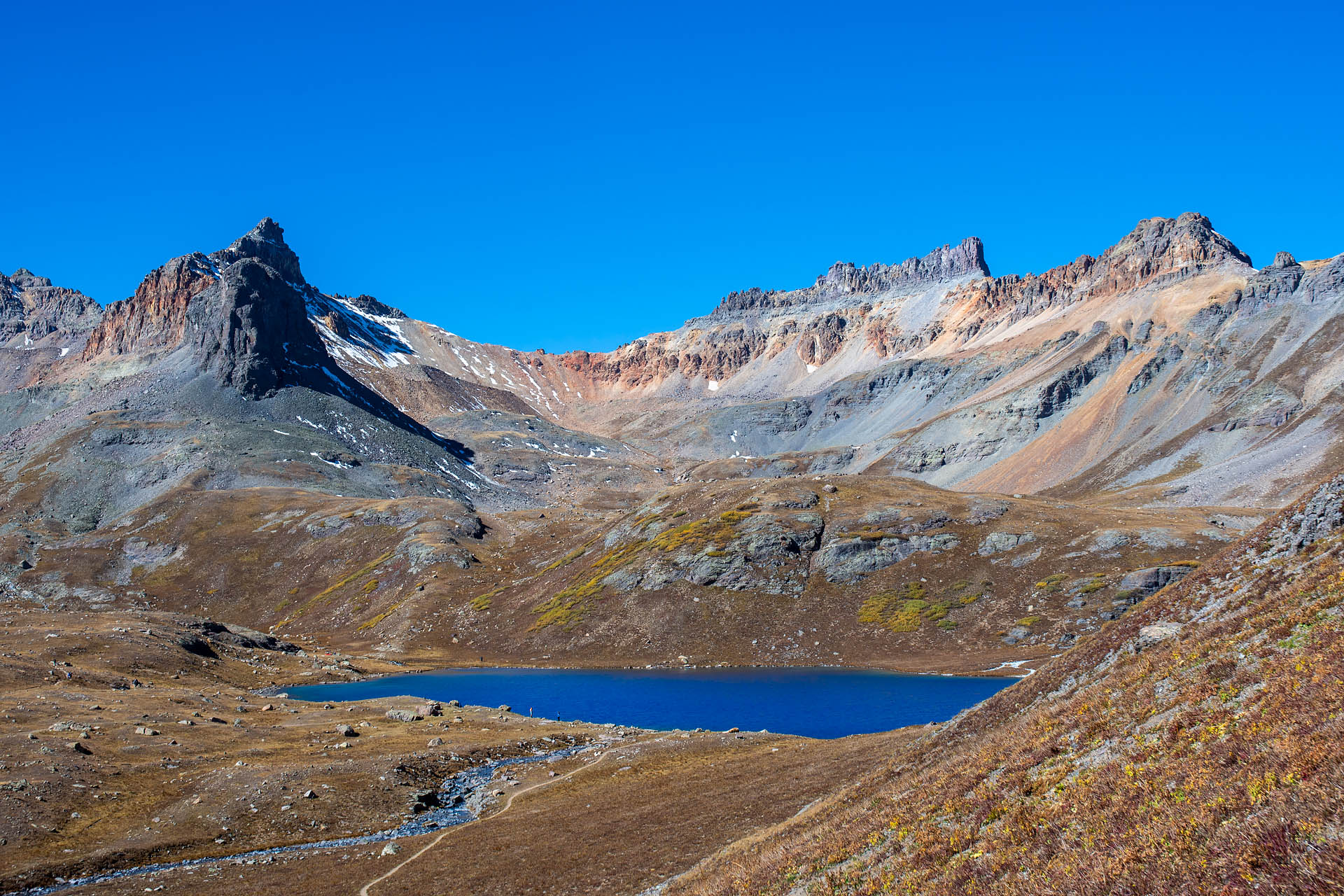 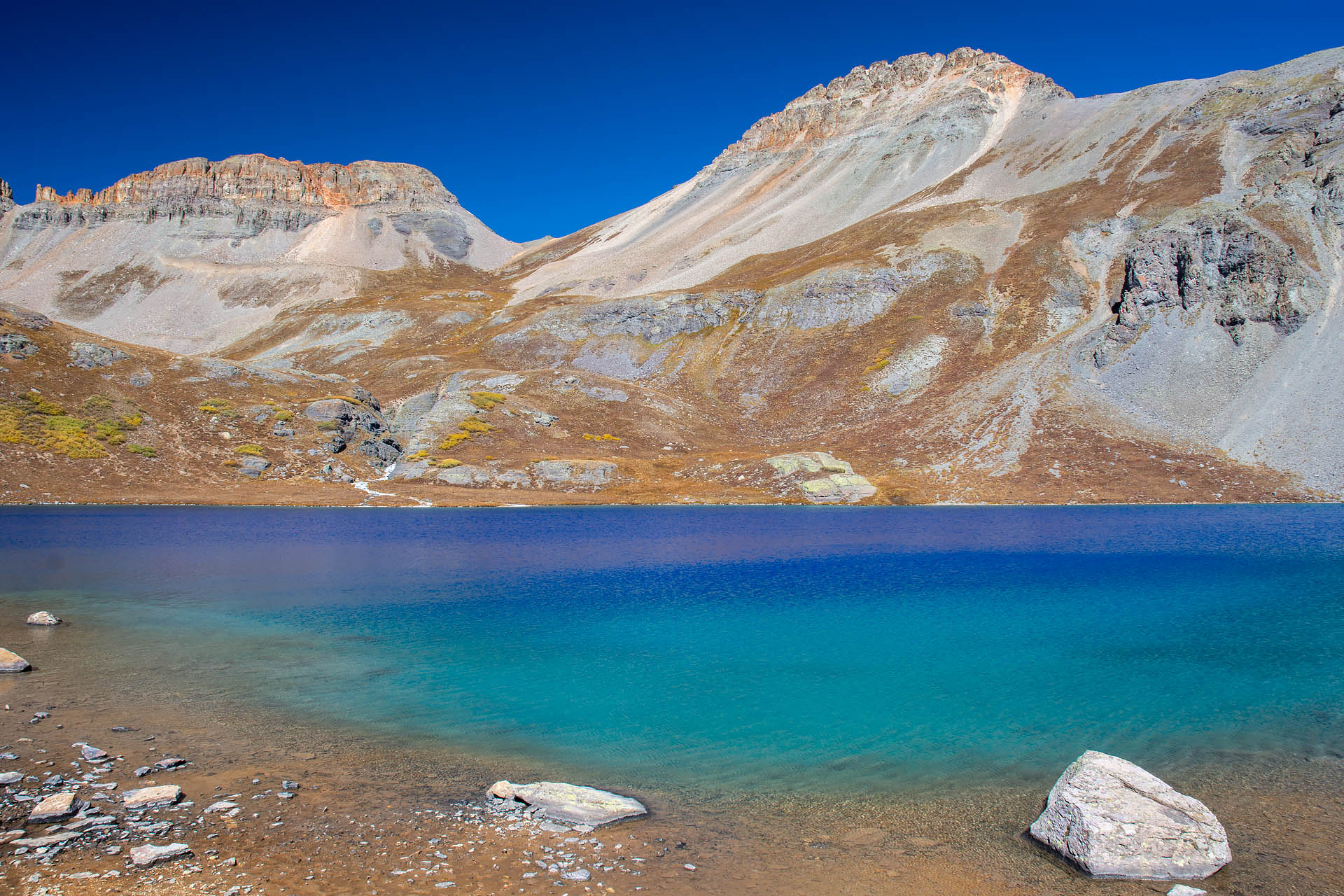 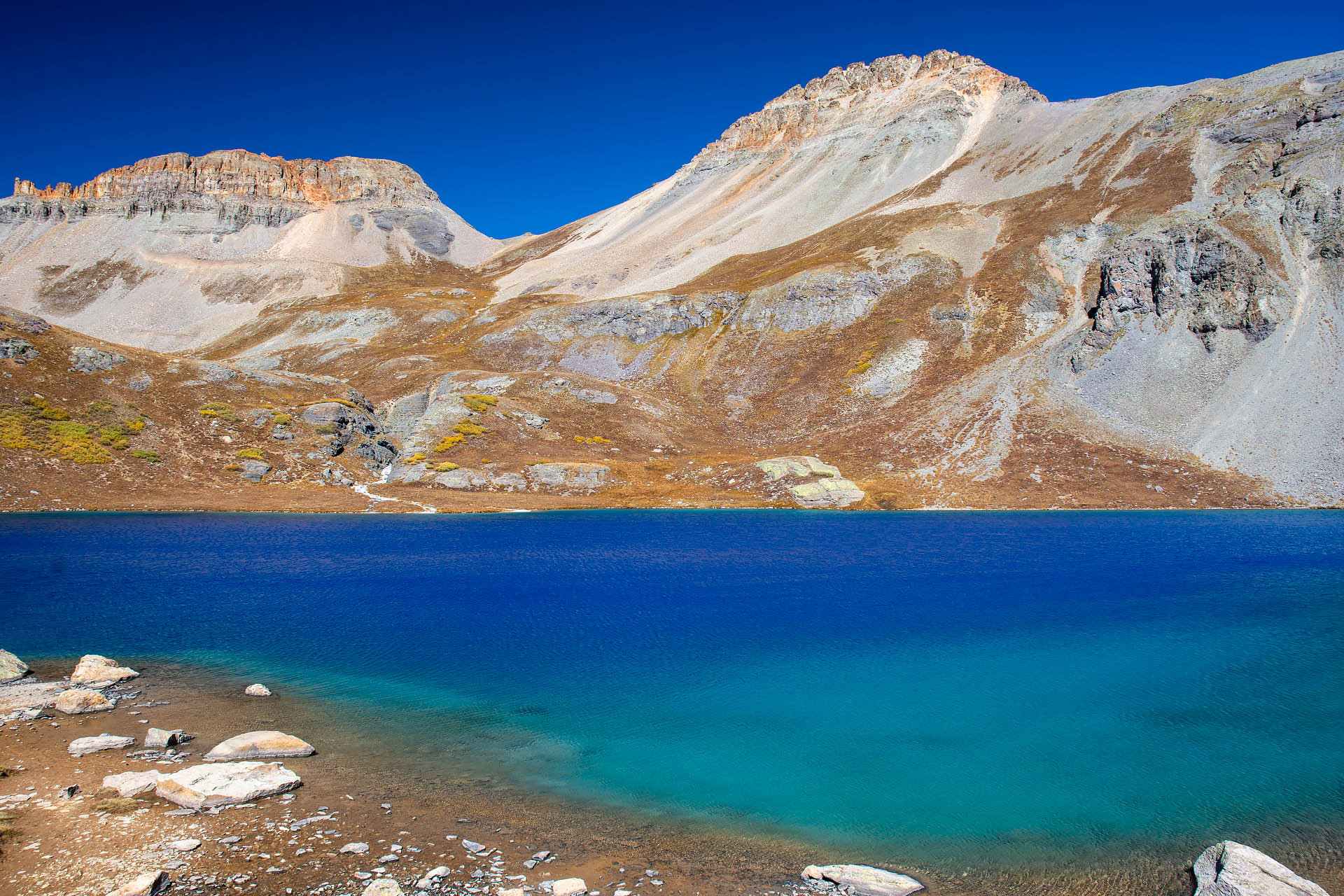 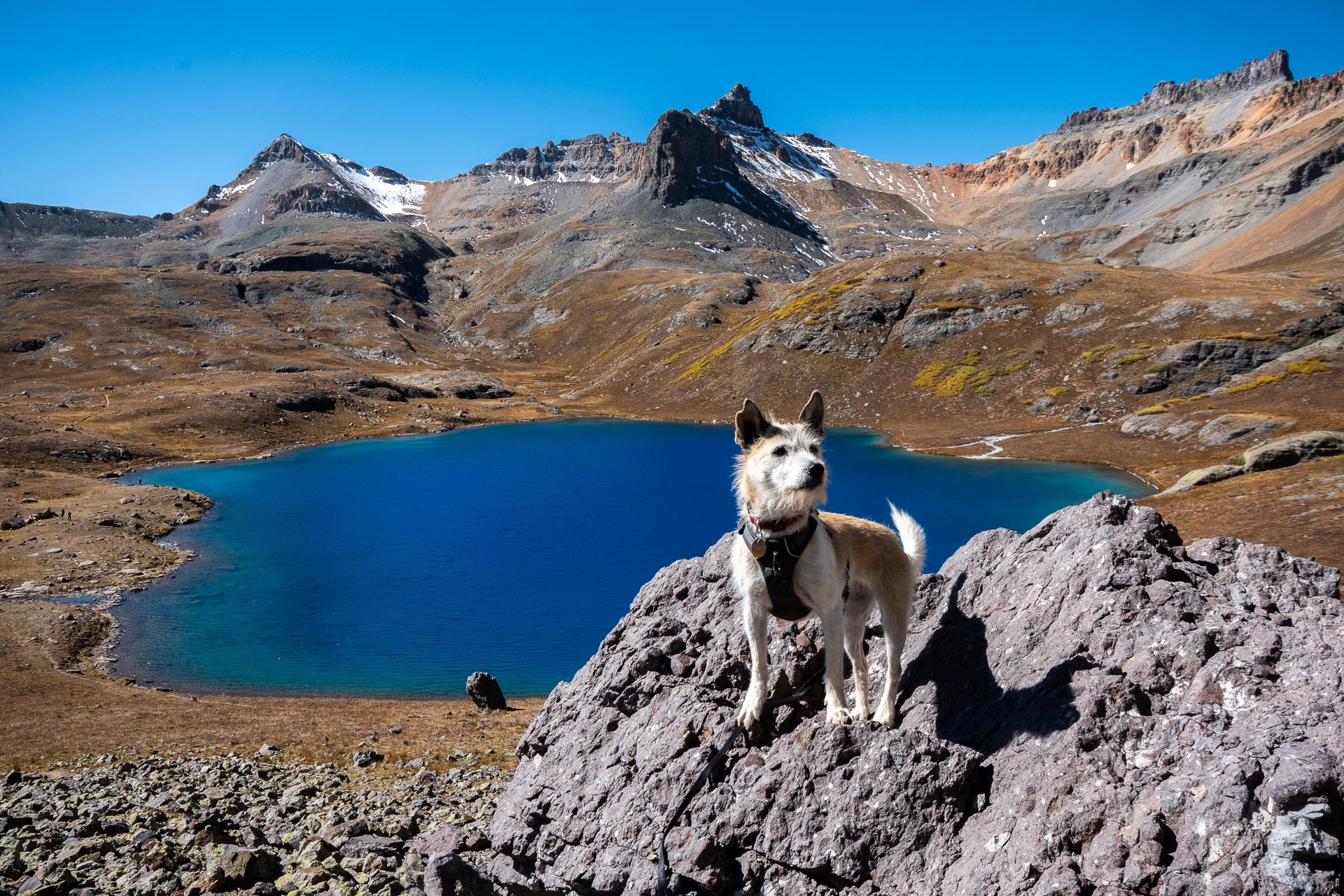 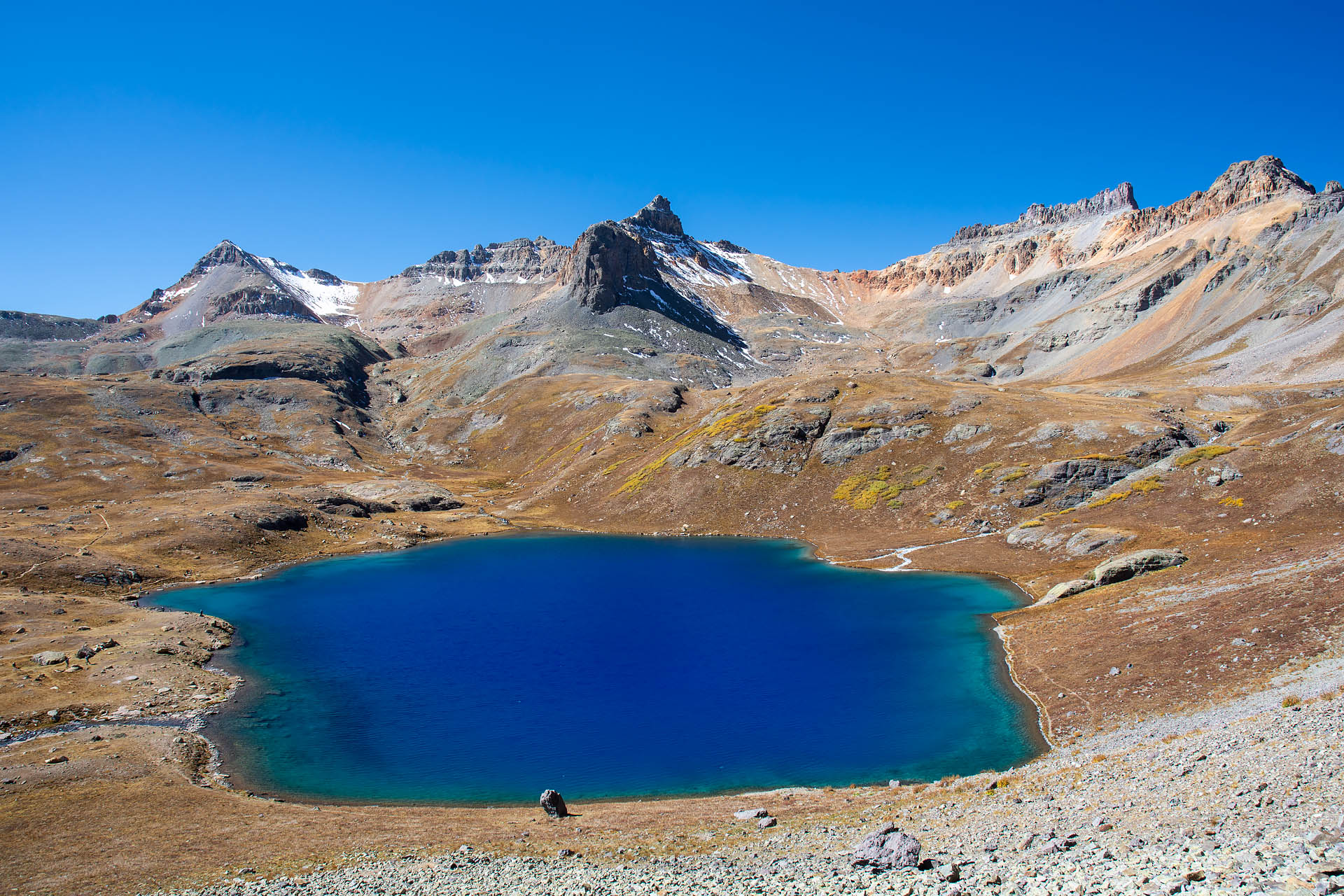 Instead of returning back down, we followed a trail just beyond Ice Lake’s western shore. We soon reached a small, unnamed lakelet with Pilot Knob’s sharp summit soaring overhead. We later learned that if we’d continued along this path, we would have reached Fuller Lake, but were somehow completely oblivious to this at the time. I was fairly annoyed, but I suppose it’s reason to return someday. 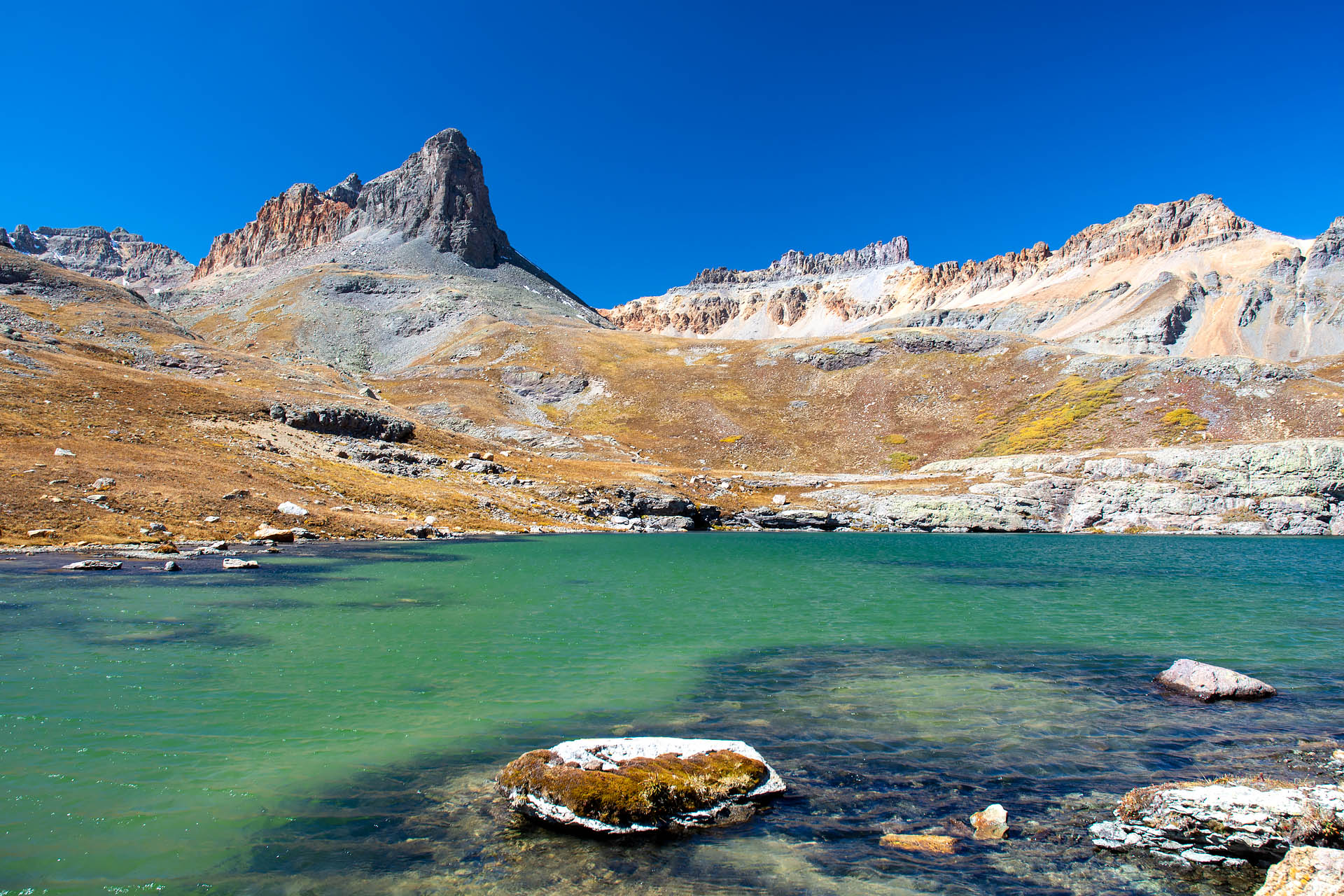 Returning to the trailhead from Ice Lake was particularly scenic, with sweeping views down into Lower Ice Lakes Basin. The fall foliage was in dazzling display, with the hillsides washed in gold. We were glad we saved this segment of trail for later in the day as the sweeping valley views faced just about due east. 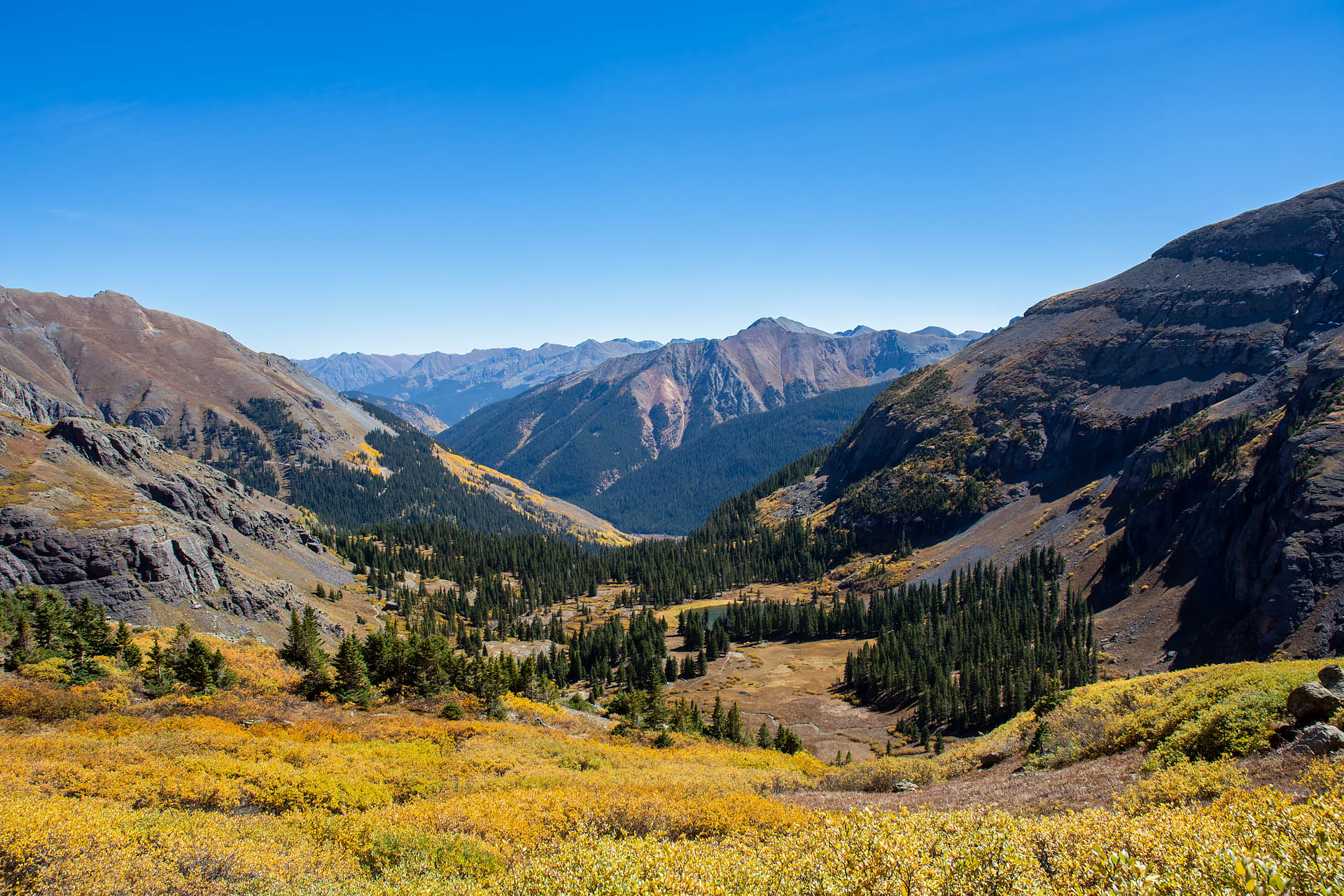 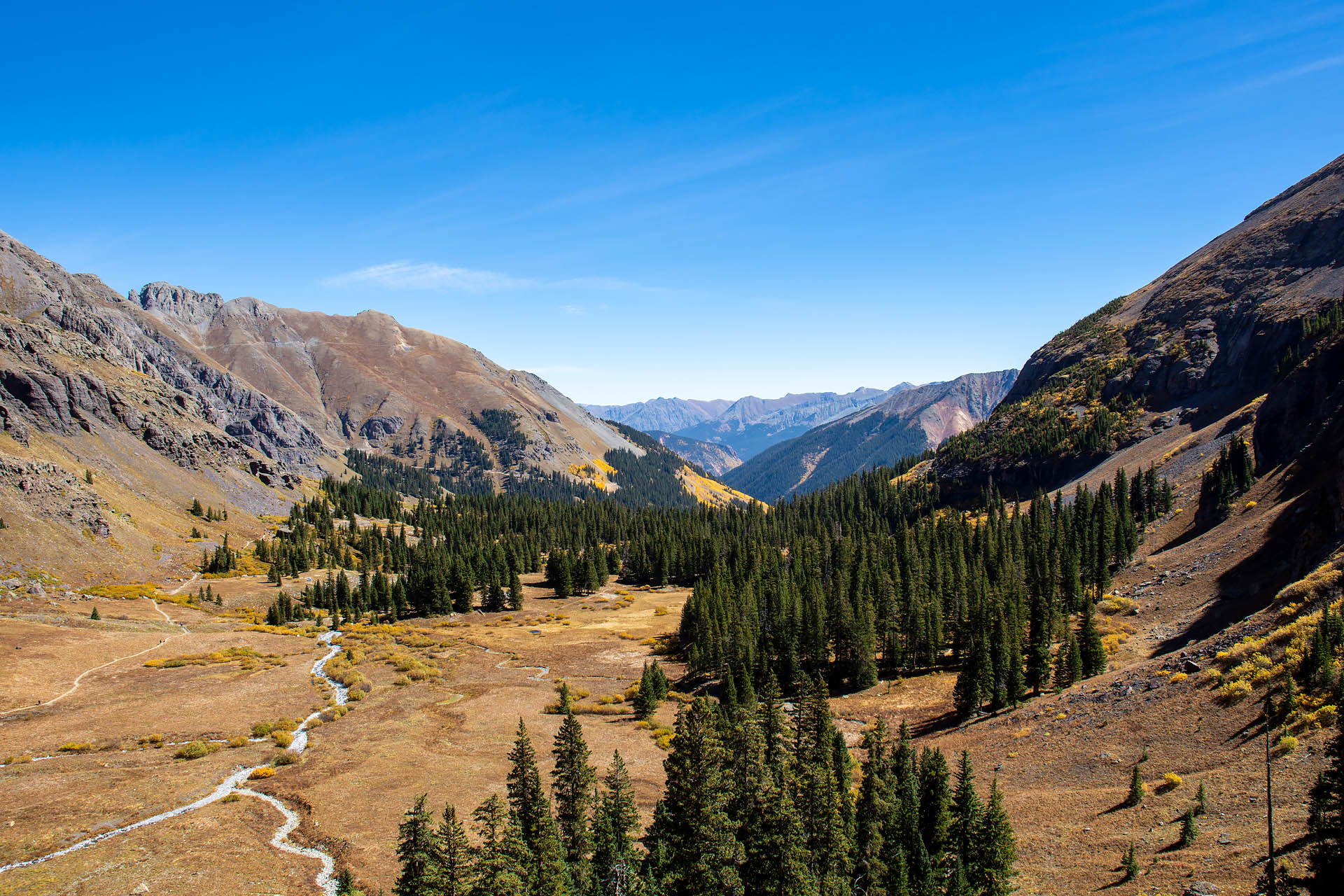 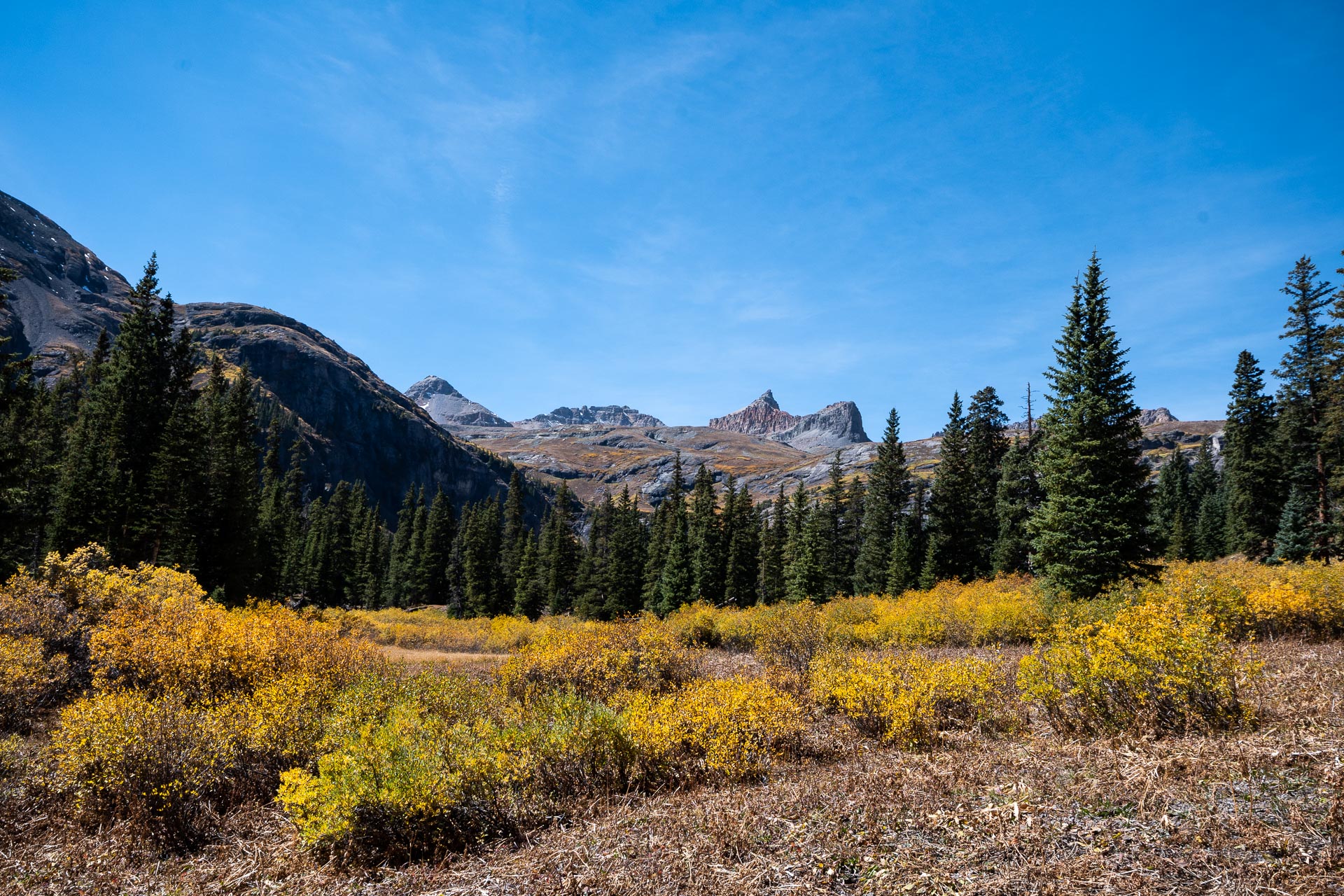 It was easy to see why the trail is rated as one of Colorado’s best – it was really quite spectacular. That said, I imagine hiking on a sunny summer day could be an absolute nightmare. By the time we left, the large lot at the campground was pretty packed, and we were glad we’d started out fairly early. If you decide to hike this trail, please remember to pack out anything you take in, use good trail etiquette, and make sure your dogs are leashed if they aren’t under positive voice control (note: recall means your dog actually listens to you, not that you just say it’s name repeatedly while it ignores you). With the number of people using the trail, especially during peak season, it’s especially important to be thoughtful and diligent to protect the trail and wilderness for everyone. 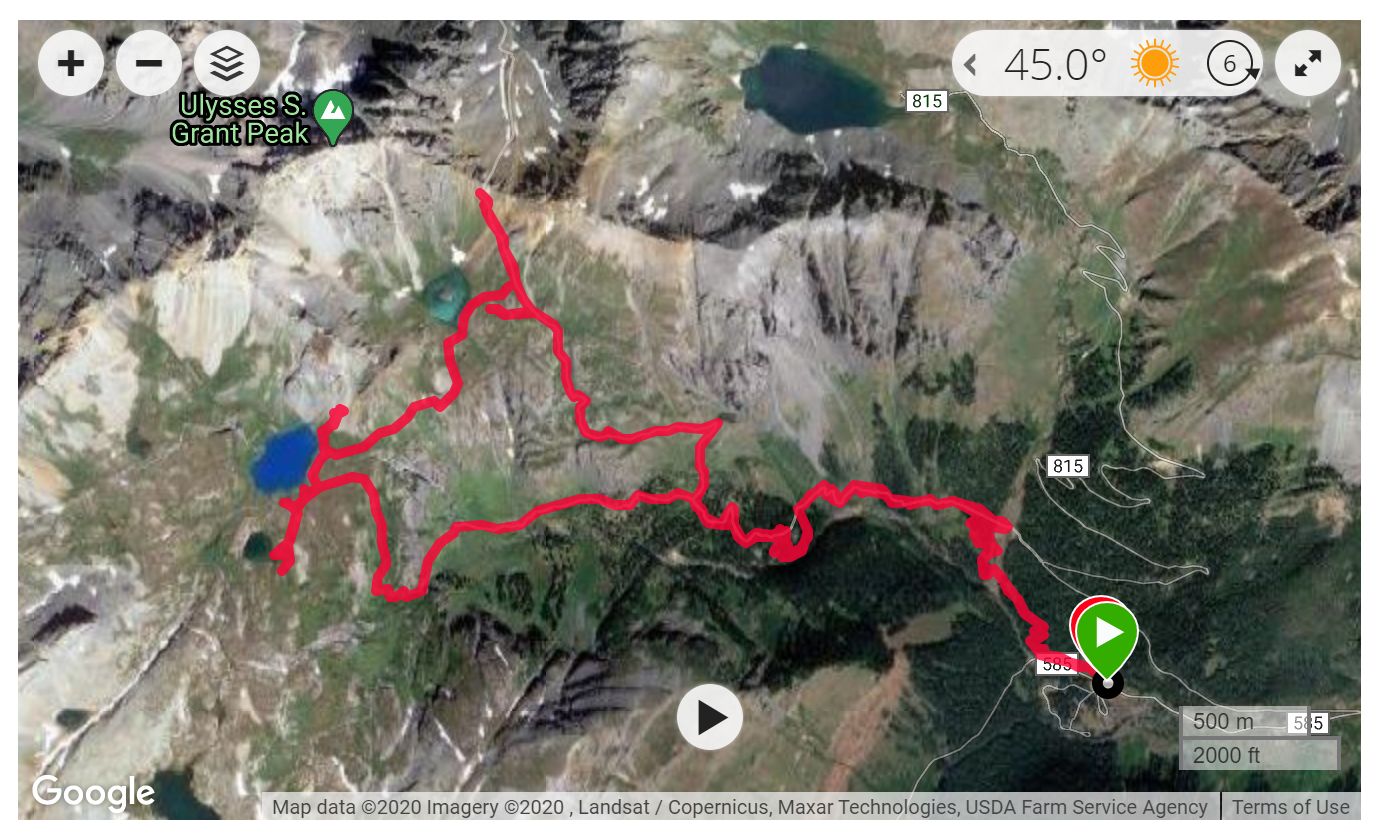 As of October 20, 2020, the Ice Lakes Basin trail is closed indefinitely. A fire sparked on the afternoon of October 19th, quickly engulfing the forest about half mile up the trail from the South Mineral Campground. With the trailhead being completely cut off, helicopters had to rescue 28 hikers and three dogs who’d become trapped higher up on the trail. Sadly, the blaze burned some 600 acres, with the cause still under investigation. Thankfully, the Forest Service and Flight for Life made a swift and heroic rescue of all those on the trail: https://the-journal.com/articles/192368. The San Juan National Forest Service issued a formal statement on October 28, 2020 stating that the trail would be closed until July 31, 2021. While the date is subject to change, please check with the Forest Service before embarking on this hike.