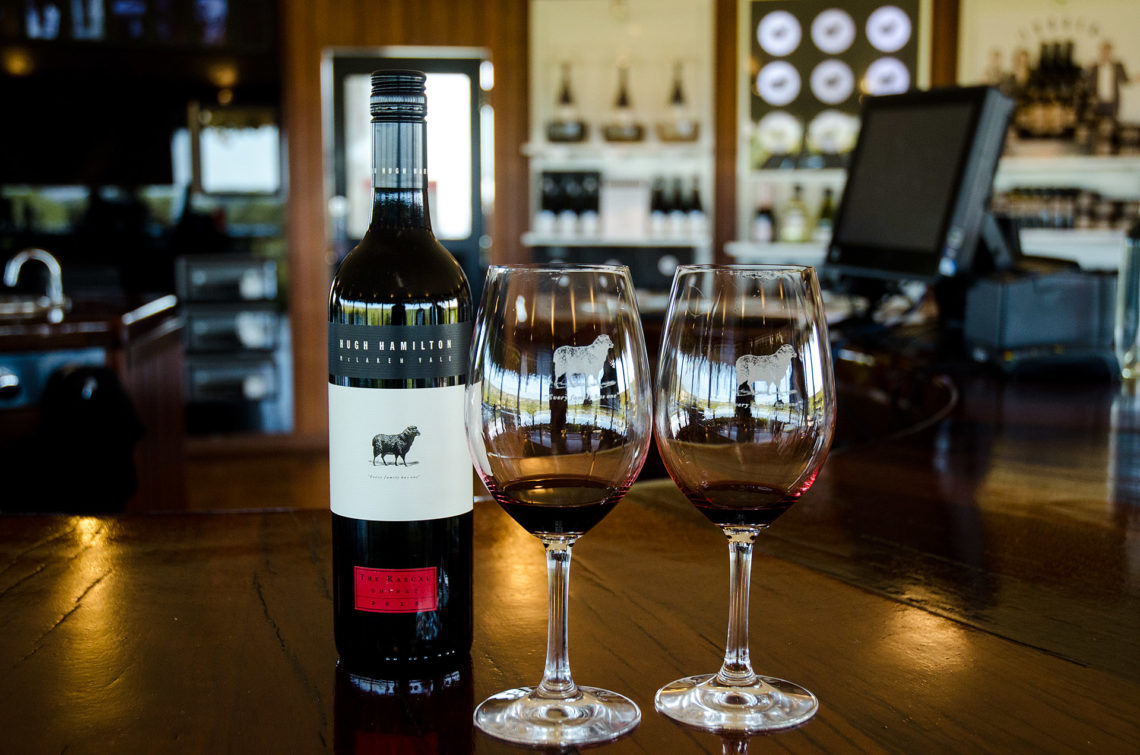 The renowned McLaren Vale wine region lies about 40 minutes (25 miles) south of the coastal city of Adelaide, in the state of South Australia. Having enjoyed several wines from this region back home in North Carolina, we knew we had to make a visit. We found a beautiful B&B in Seacliff, a southern suburb of Adelaide, that was perfectly located halfway between McLaren Vale and the city center. Thus, Rosalynda became our home base for a few days of touring wine country and the city.

Our first stop in McLaren Vale was at Hugh Hamilton Wines. About six years ago, we met Hugh at our fabulous local wine shop, Anytime Wines (which we still miss dearly since its closing), when he made the long journey across the Pacific to do a tasting. We were instantly taken both with Hugh’s friendly and humorous personality as well as with his Rascal shiraz. In fact, a bottle he signed for us still sits in our wine fridge back home – currently at temperature in my parents’ basement (thanks, guys). Hugh is a fifth-generation winemaker whose family first started growing grapes in the region in 1837. He describes himself as the black sheep of the family, and thus uses the symbol for his “flock” of wines. Consequently, the property has a distinct ovine theme, with cute little sheep statues watching over the rolling vineyards. The cellar door room at Hugh Hamilton is quite stunning, set inside a glass-walled gazebo with nearly 360° panoramas of the flourishing vineyards. The wines were just as beautiful as the surroundings, and we were particularly fond of some of the limited-edition shiraz vintages. We grabbed a bottle of ‘Black Ops,’ a tasty 2013 blend of shiraz/mataro/saperavi, to enjoy at our upcoming farmstay on Kangaroo Island. Hugh also happened to be on-site, so it was fun to chat again after telling him about our tasting with him six years ago. The tasty wines, the welcoming service from the staff, and the gorgeous location made this probably our favorite winery in McLaren Vale. 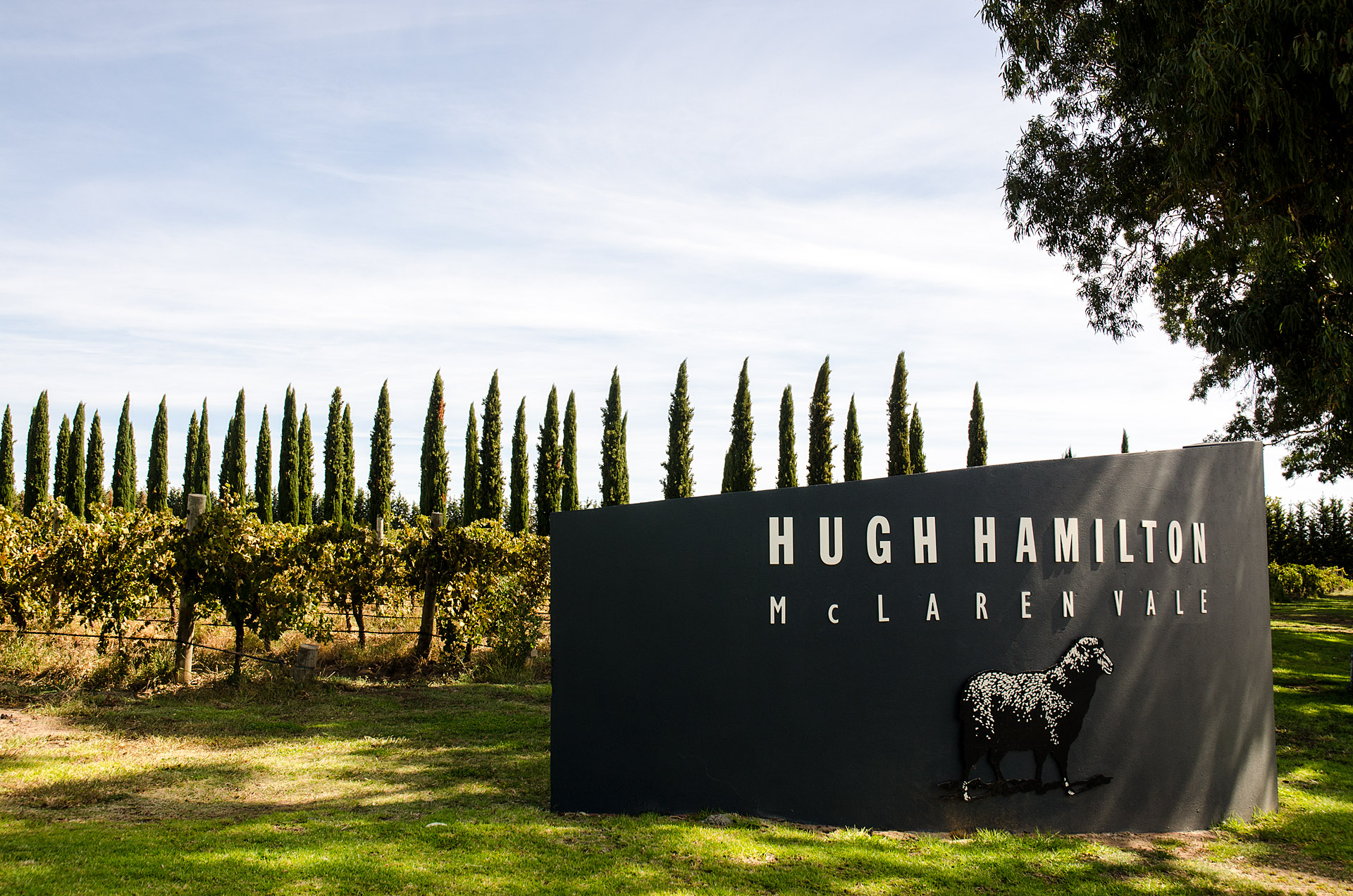 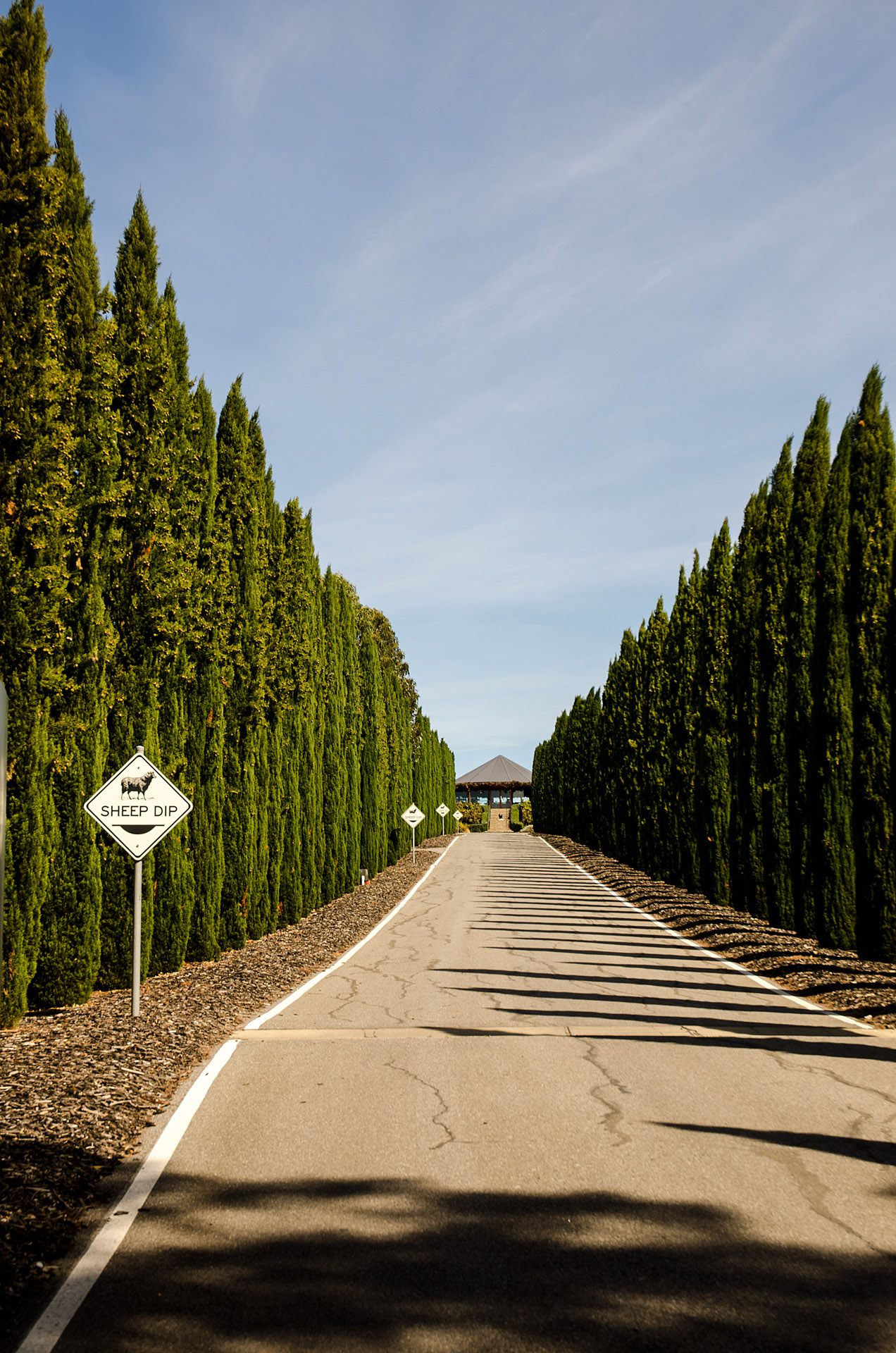 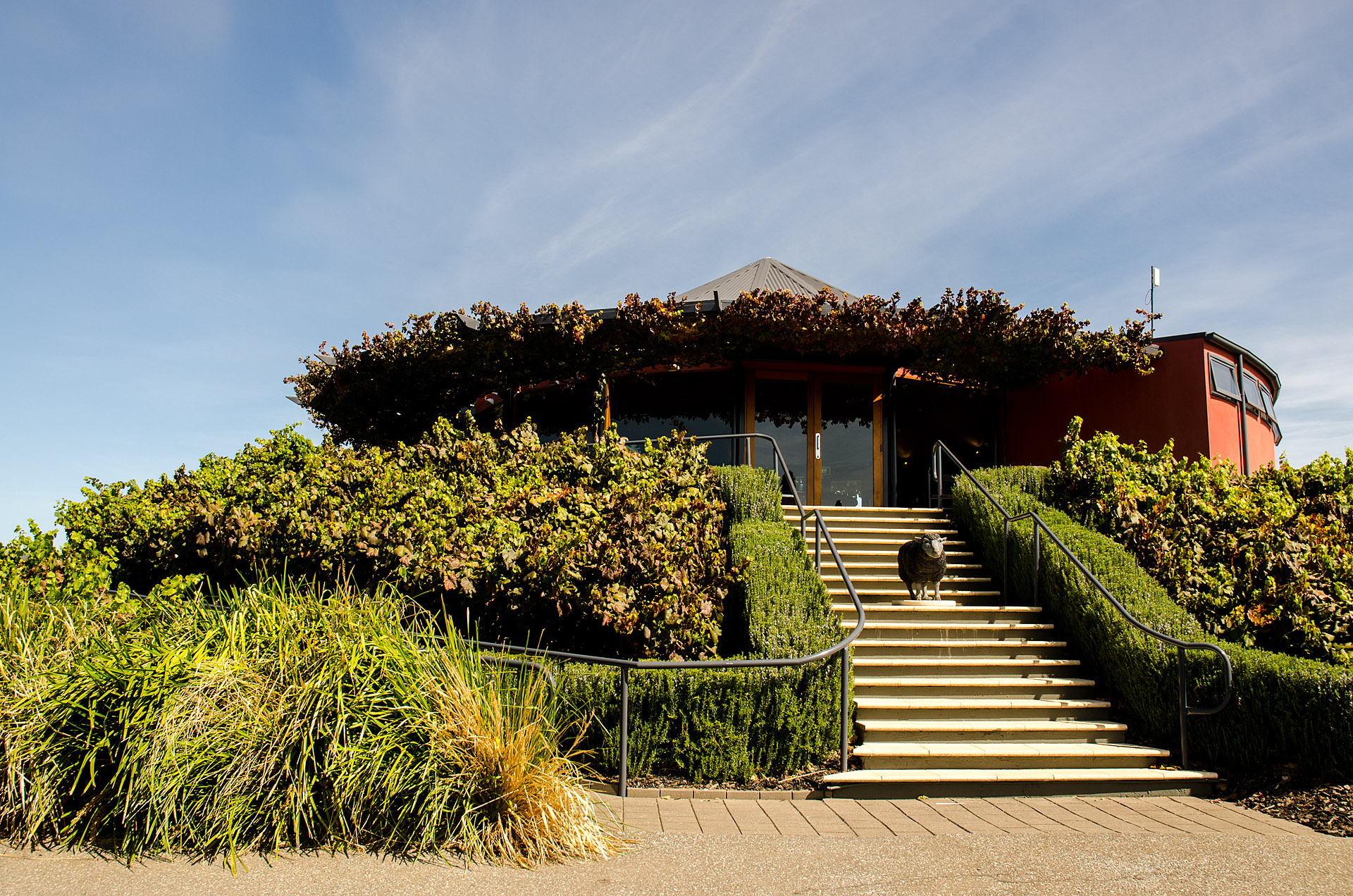 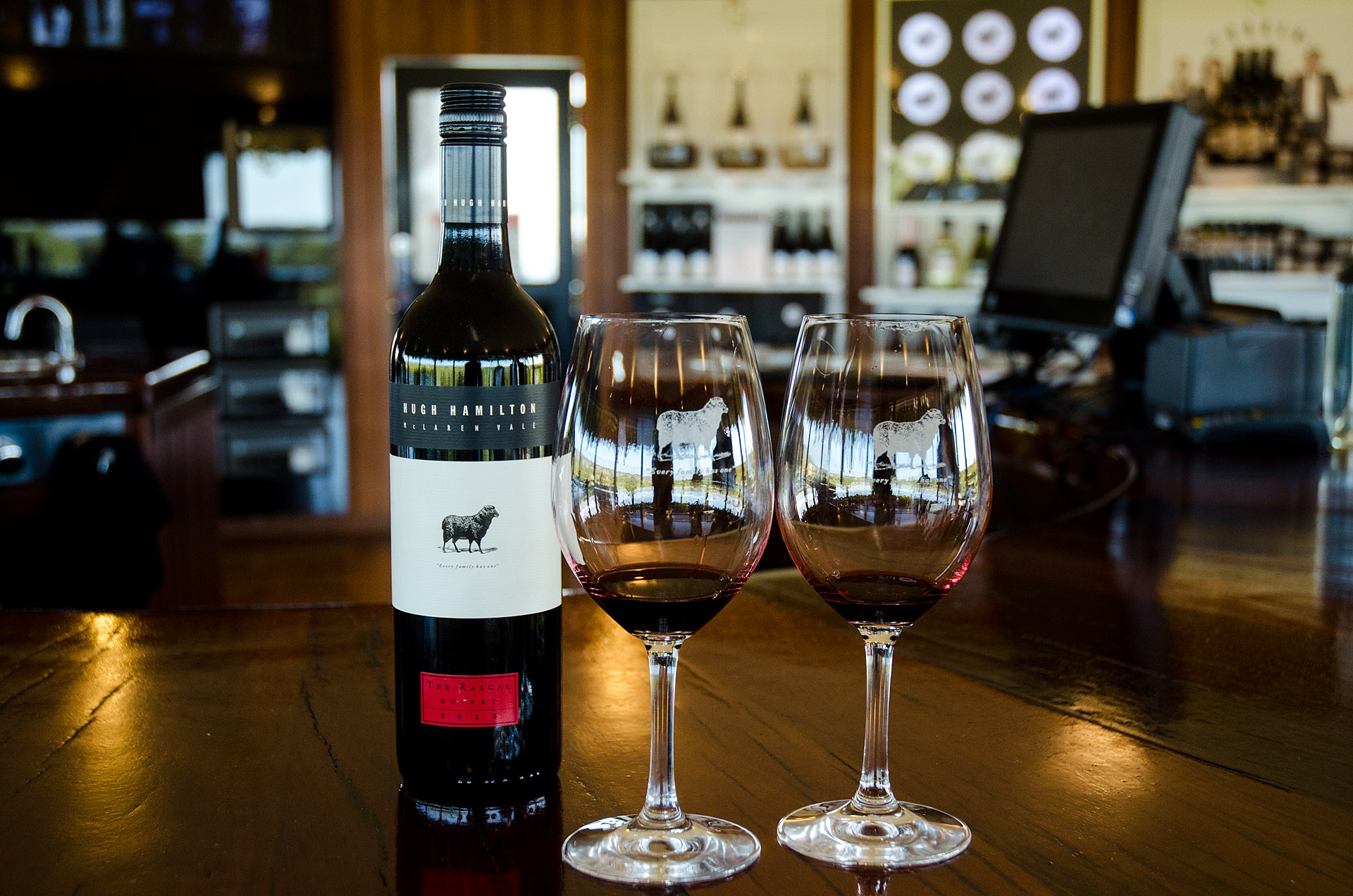 Of the other cellar doors we visited, we found two to be quite good – Molly Dooker and Brick Kiln. We’ve tried a couple Molly Dooker wines in the U.S. and my friend Chad is a big fan of their reds, so we figured we should go do a tasting while here. The cellar door menu was quite extensive, with 13 different wines offered – at least a couple each of whites, sparkling, cabs, shiraz, and blends. Each wine has a playful name and label, typically with a cute anecdote about the winemakers or their children. A unique and interesting feature of their wines is that the winemakers use nitrogen when bottling to preserve the wine. This reduces the number of sulphites used as preservatives (beneficial because some people are sensitive to the compounds, and because nitrogen is a more stable preservative). Because of this, they recommend doing what they call “the Molly Dooker shake” prior to drinking. Basically, you pour a bit of wine out to create a headspace, invert and shake the bottle until nitrogen bubbles rise to the top, then remove the cap to evacuate the nitrogen. Releasing the nitrogen ensures the flavor has fully developed back through the bottle after being compressed by the gas, and they recommend “the shake” on any red less than two years of age. We tried one of the reds with and without the shake, and could easily taste a difference in the flavor. Of the reds we tried, Stephan most favored the Carnival of Love shiraz, while I enjoyed the Enchanted Path, a cabernet/shiraz blend. They also pulled out a bottle of the Velvet Glove, their highest-end shiraz, which we also found to be quite tasty. 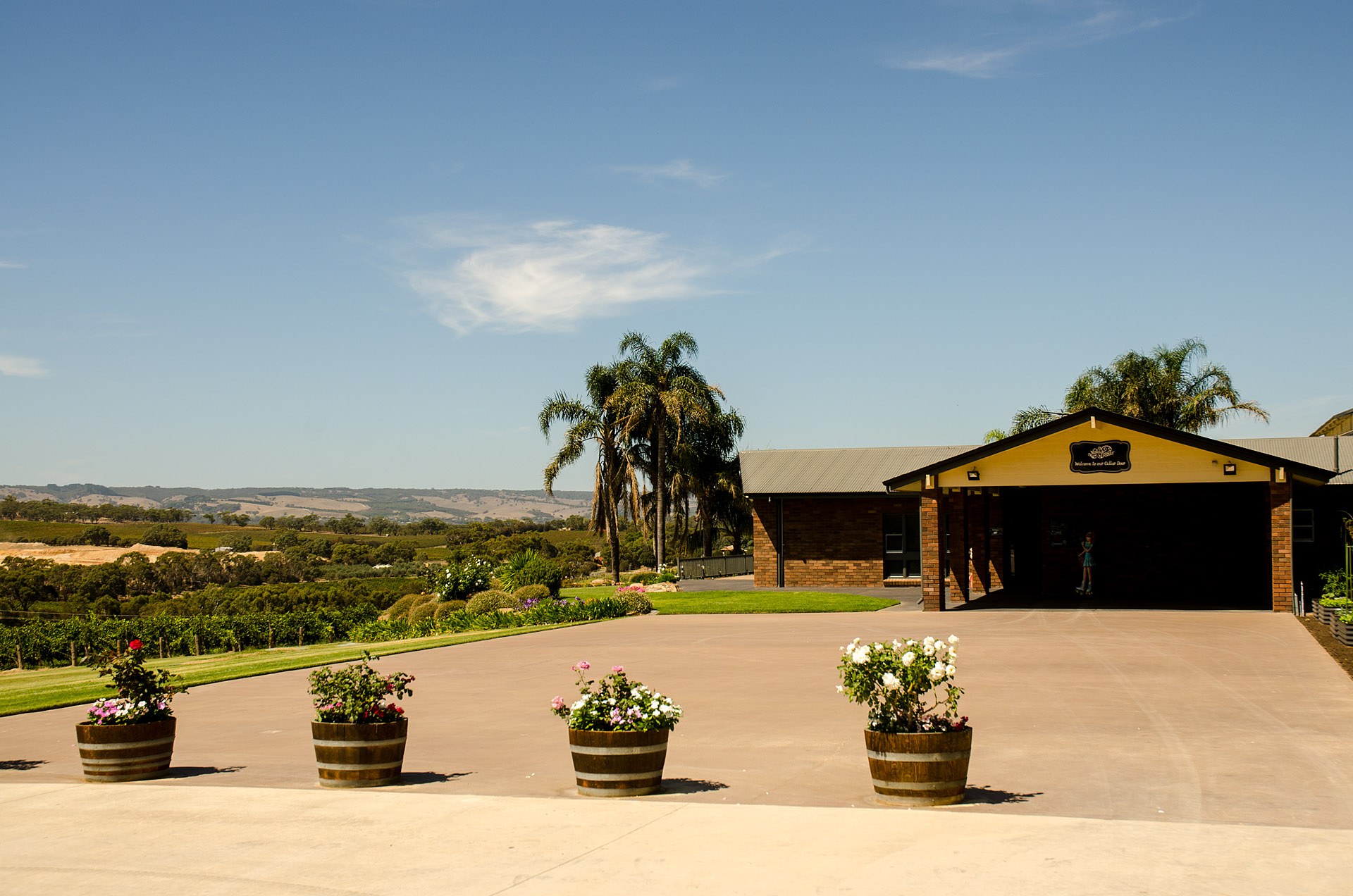 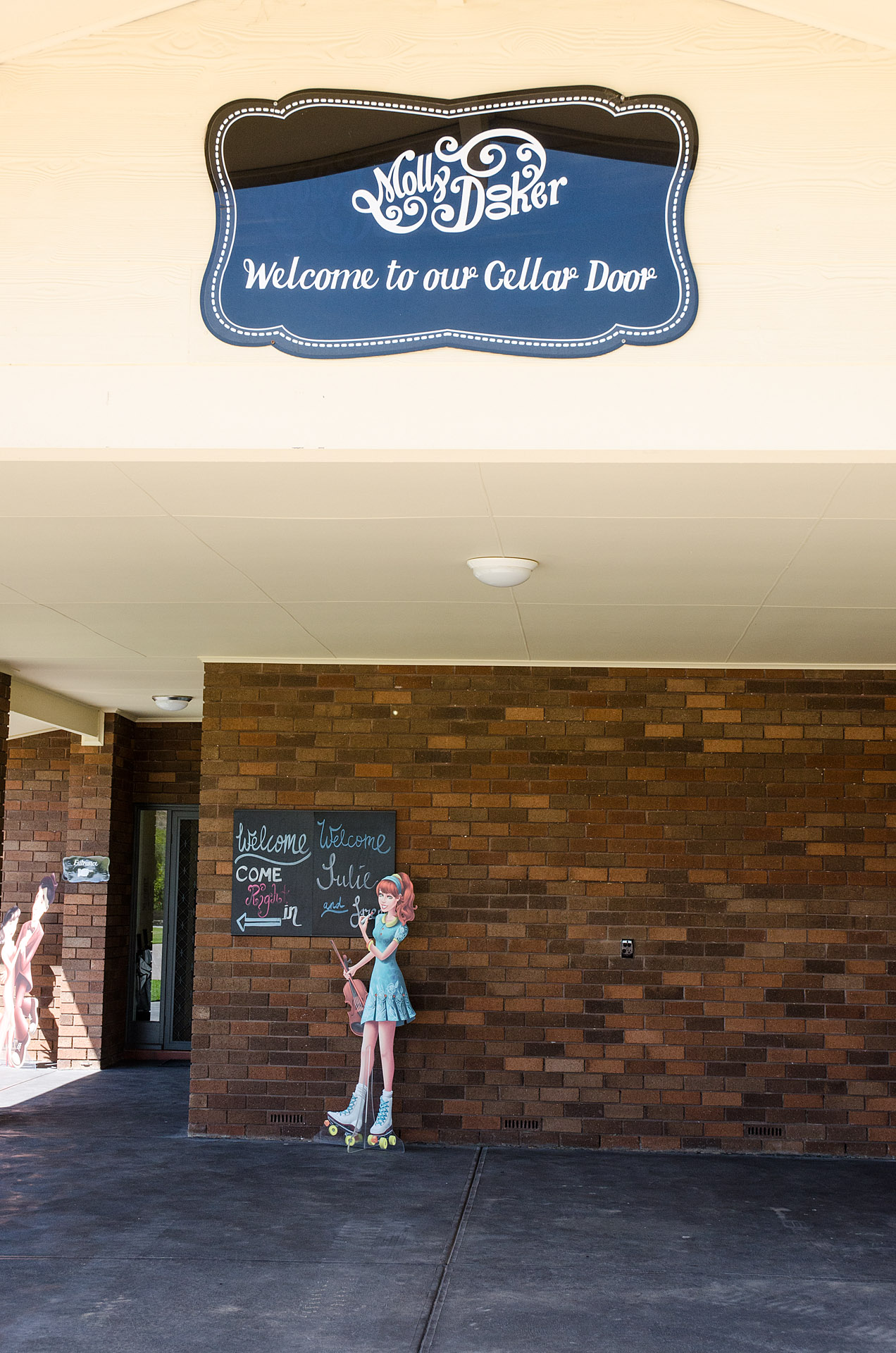 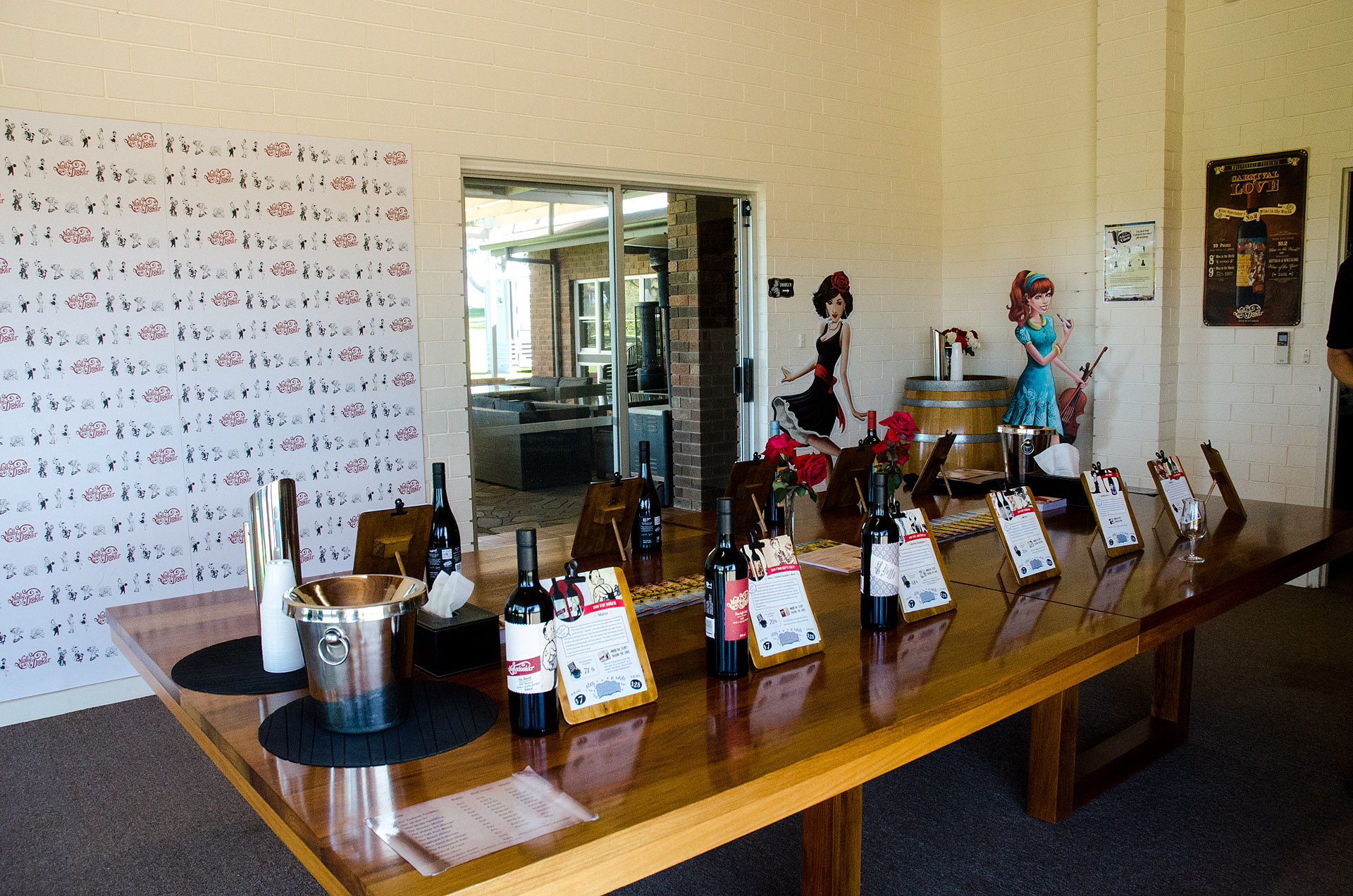 Brick Kiln, another favorite of the day, ended up surprising us with their delicious reds. Growing up, my family spent many summers on Cape Cod, where my friend Kelly’s family owned a home. As we entered into West Falmouth on each trip, we drove along Brick Kiln Road. I have so many wonderful memories from the Cape, and always remember the excitement of seeing the big, green ‘Brick Kiln Road’ exit sign off the highway. For this reason alone, I had to check out the winery. The cellar door for Brick Kiln was extremely modest. Unlike the other vineyards with fancy tasting rooms, this small-batch winery set up their tasting on a modest little table behind the Red Posts Restaurant. Also in contrast to some of the larger operations, Brick Kiln’s focus is solely on shiraz. The winemaker, Phil, warmly greeted us for our tasting and chatted extensively about the wines and the sights around the area. This was also a change from the other wineries, who typically have a separate staff leading the tastings, rather than winemaker. Phil was a delight, as were all three reds we tried – a sparkling shiraz, their signature Brick Kiln shiraz (2013 vintage), and the 2013 reserve shiraz, The Grove. We loved the more personal experience from the small winery, as well as Phil’s approach – he focuses on one thing and executes it brilliantly. We picked up a bottle here as well, and brought it back to our room in Seacliff to share with our generous hosts, Lynda and Ivano. Each night, they welcomed us to join them for a glass of shiraz in their beautiful screened-in porch, and we wanted to return the favor. We absolutely loved their company and hospitality, and had a great stay with them as well as a lovely time in the McLaren Vale vineyards. 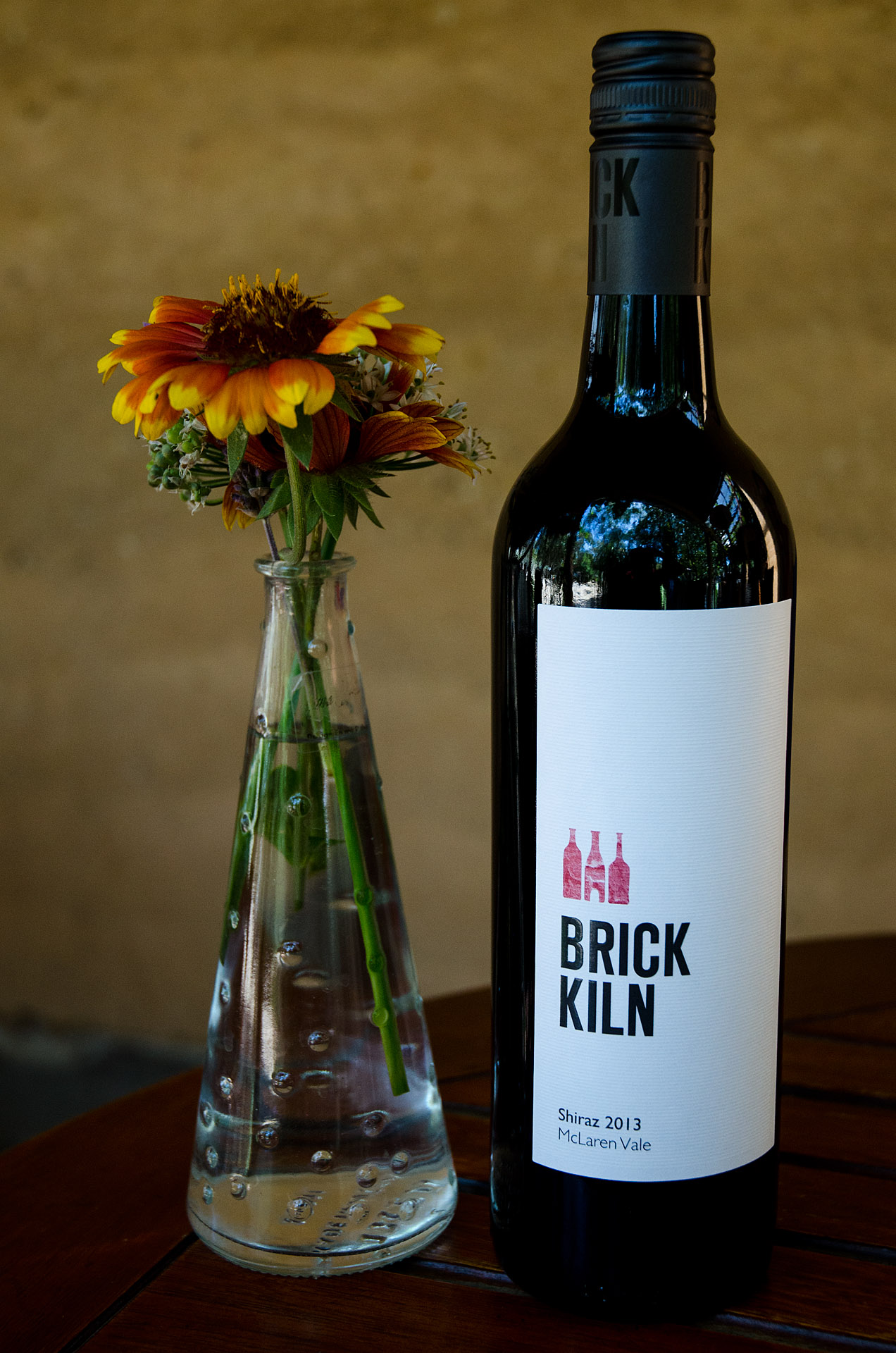