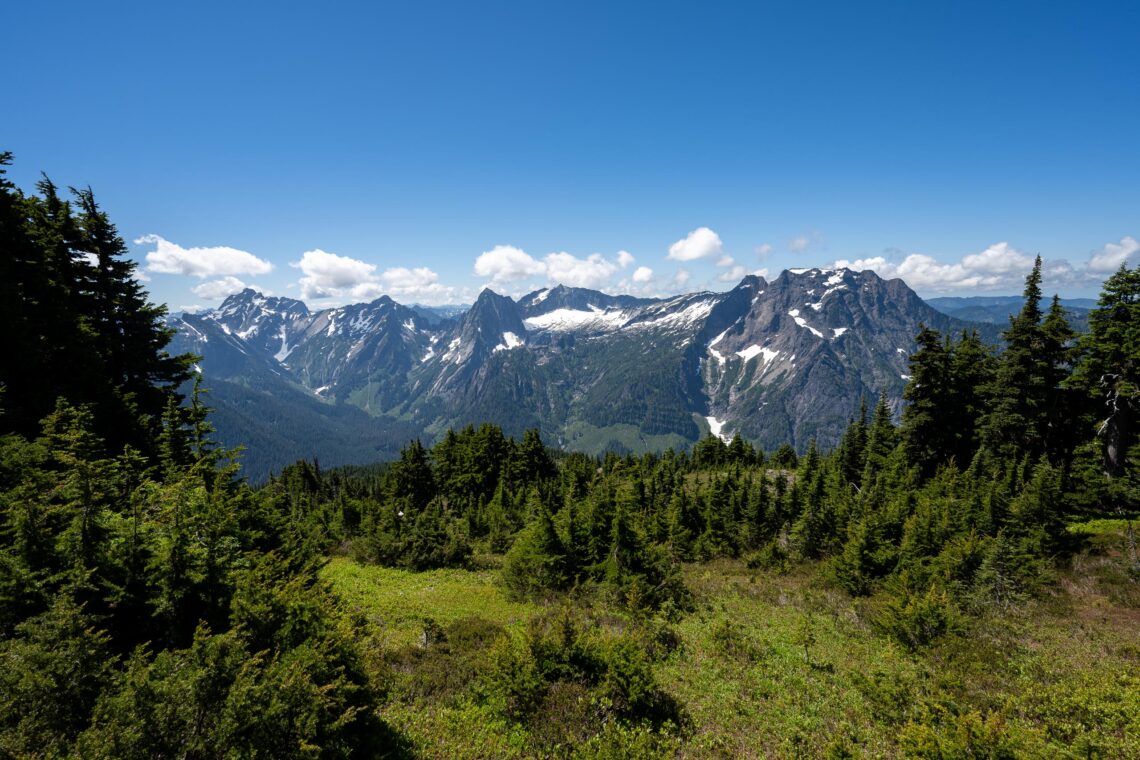 In the heart of the Mt. Baker-Snoqualmie National Forest, Mt. Dickerman is an easily accessible peak about 40 minutes (27 miles) east of Granite Falls. Sitting just off the Mountain Loop Highway between the trailheads for Big Four Ice Caves and Monte Cristo, the summit can be reached via a nine-mile out-and-back hike that traverses thick forests and wildflower meadows. Mt. Dickerman’s highpoint offers incredible views of Glacier Peak and the summits along the South Fork Stillaguamish River. On a clear day, you can even see all the way to Mt. Baker (60 miles north) and Mt. Rainier (80 miles south).

We visited on a Sunday in mid-July and would rate this trail as moderately trafficked. When we first arrived at the trailhead fairly early in the morning, we were somewhat taken aback by the number of cars in the lot. Our initial thought was that we were in for an unexpectedly crowded hike. However, the lot is shared between the Mt. Dickerman (#710) and Perry Creek (#711) trails, which seemed to split the foot traffic.

Beginning from the trailhead, the well-worn path immediately begins zig-zagging up the southwest side of the peak. The ascent is reasonably steep, gaining roughly 4,000 vertical feet over the 4.5 miles to the summit. If you love switchbacks, you’ll be a big fan of this route; in the first 2.6 miles of trail, we navigated fifty-five of them… if my count was correct. Sanchez typically dislikes the constant back-and-forth of such indirect nonsense, but she actually seemed to get into it a bit more on this trail. 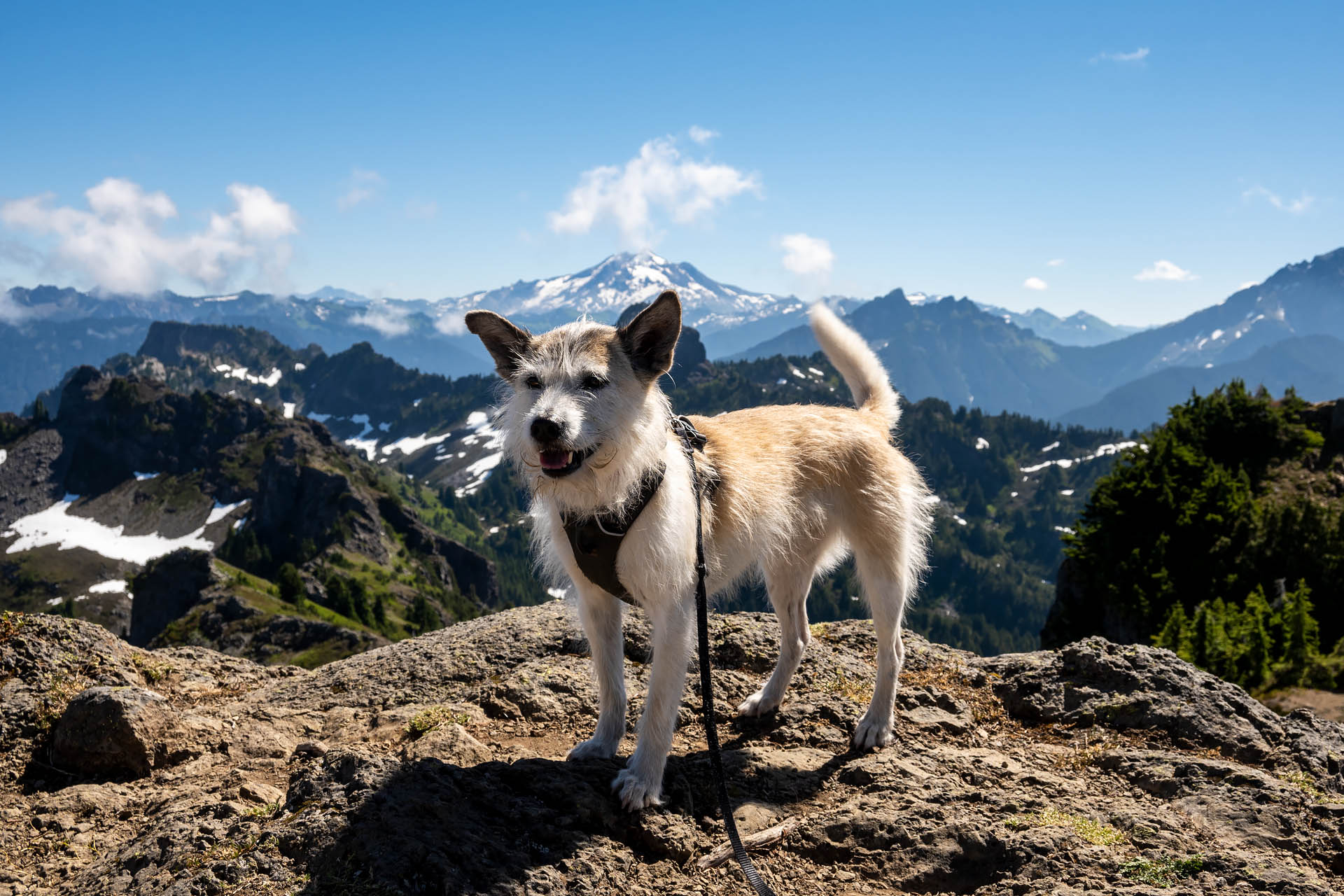 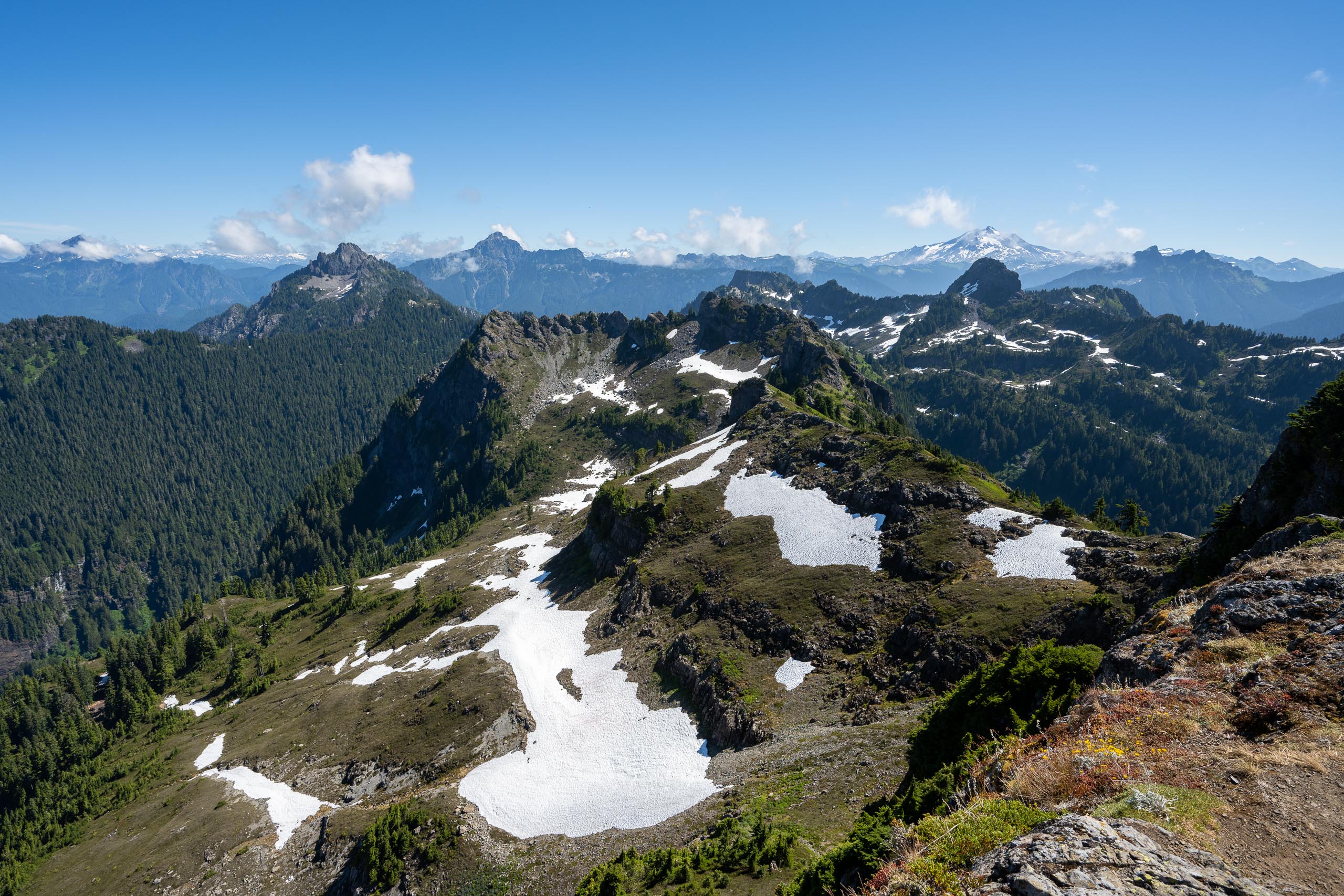 After weaving up through the forest, the trail breaks open on Mt. Dickerman’s western ridge and remains a fairly straight shot for another mile. From here, the trail makes a 90-degree bend to the right (east) where it gains the summit ridge. For the last mile to the summit, the trail traverses large wildflower meadows that were bursting with red heather when we visited. 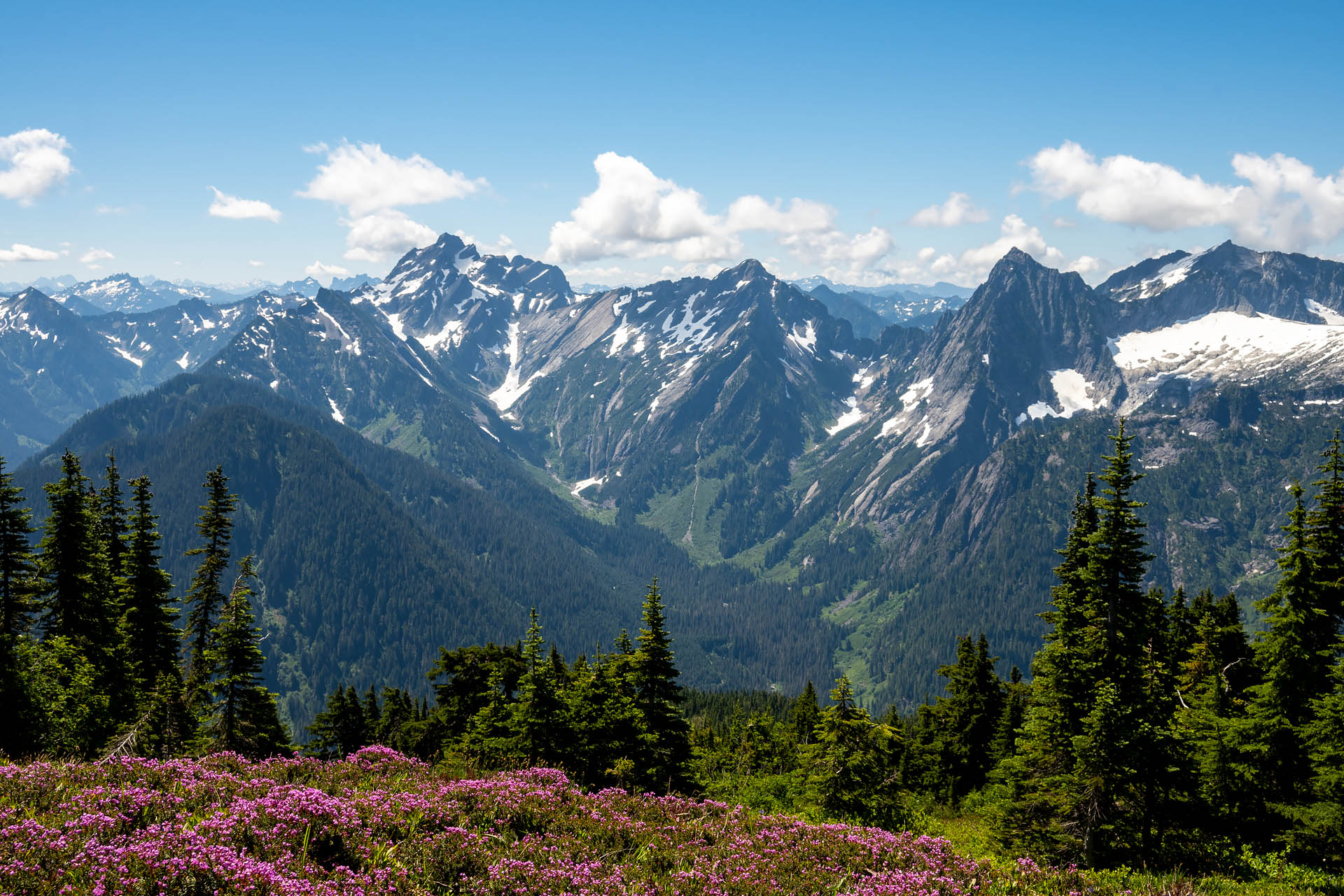 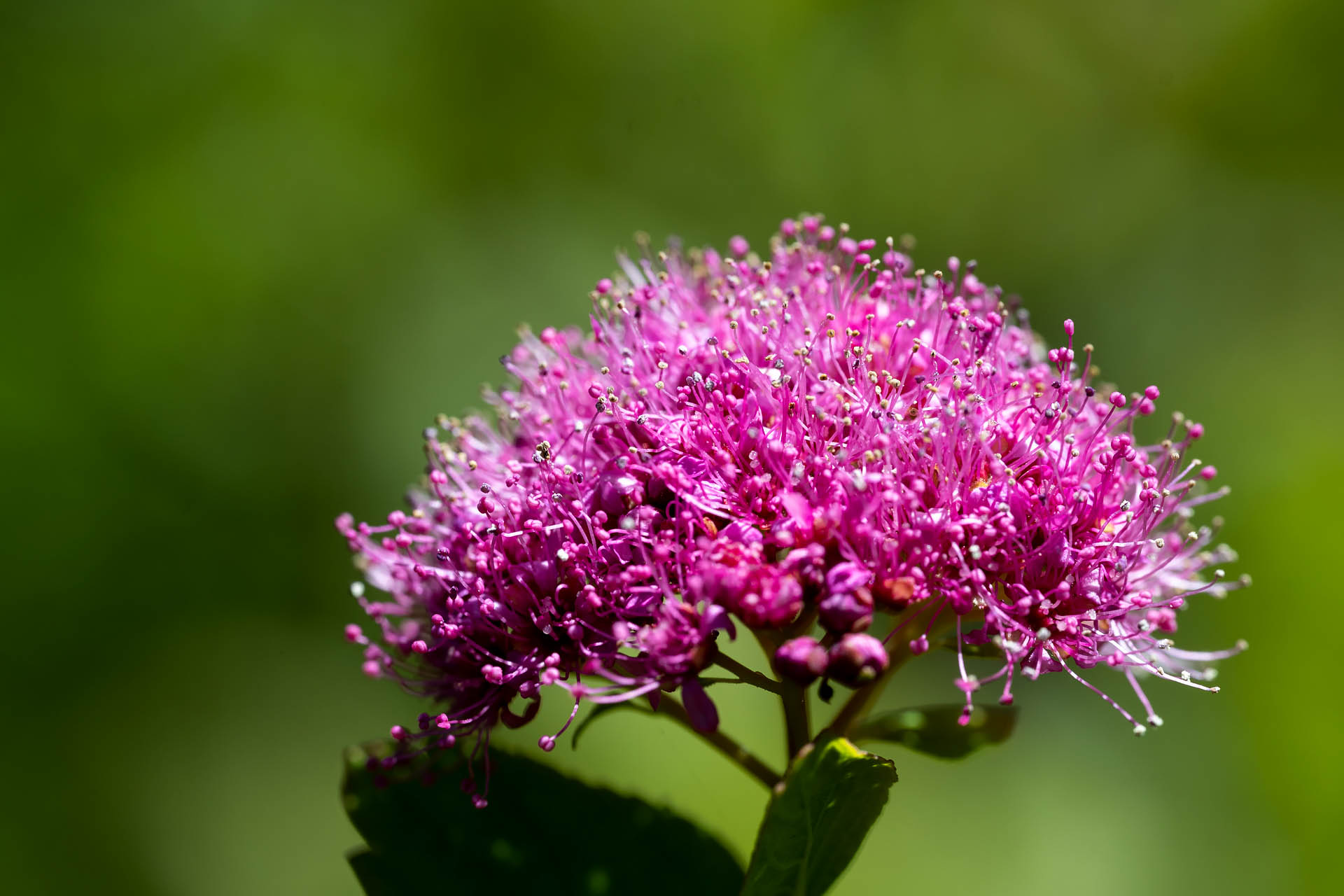 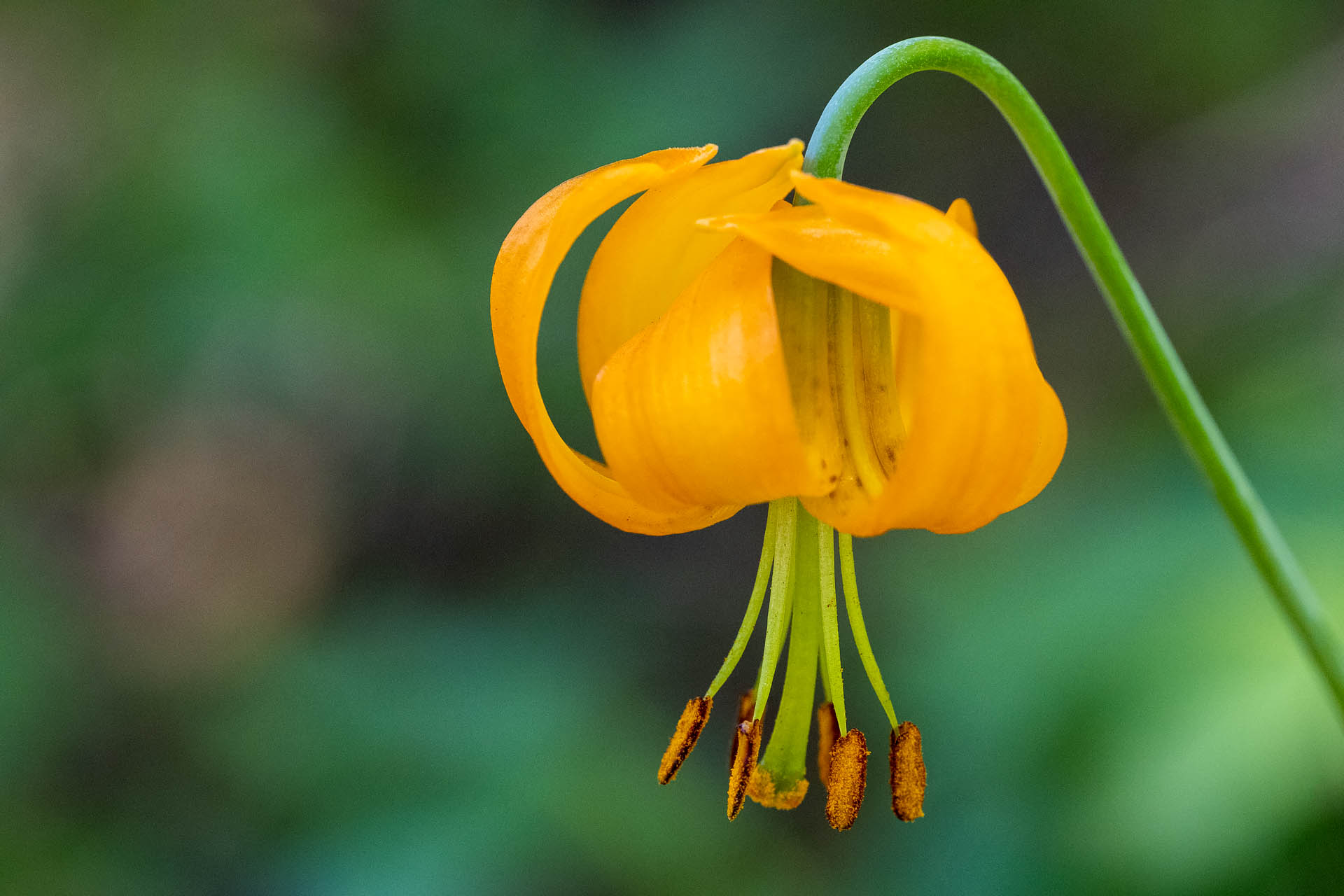 Though Mt. Dickerman’s summit stands at a modest 5,723 feet, the views from the top are surprisingly scenic. The north side of the mountain has an insanely sharp drop-off and offers some nice views out to Three Fingers, Mt. Bullon & Whitehorse. To the east, Glacier Peak’s massive 10,541-foot summit rises prominently behind the rocky knob of Twin Peaks East. Glacier Peak is the most isolated of Washington’s five stratovolcanoes and, as its name suggests, it’s covered with twelve named glaciers. Aside from Mount St. Helens, it’s the only volcano in Washington to have recorded a major explosive eruption in the last 15,000 years. 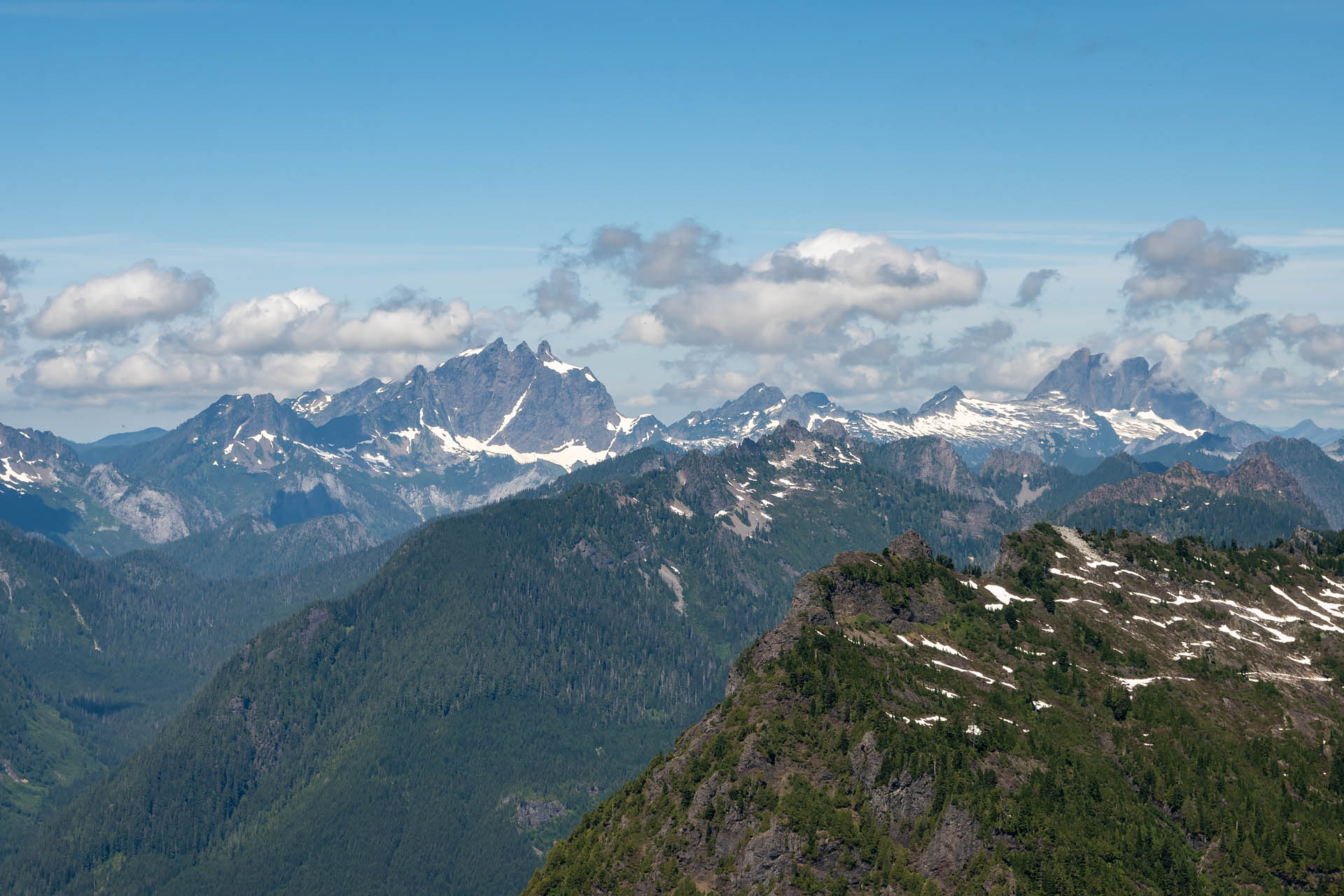 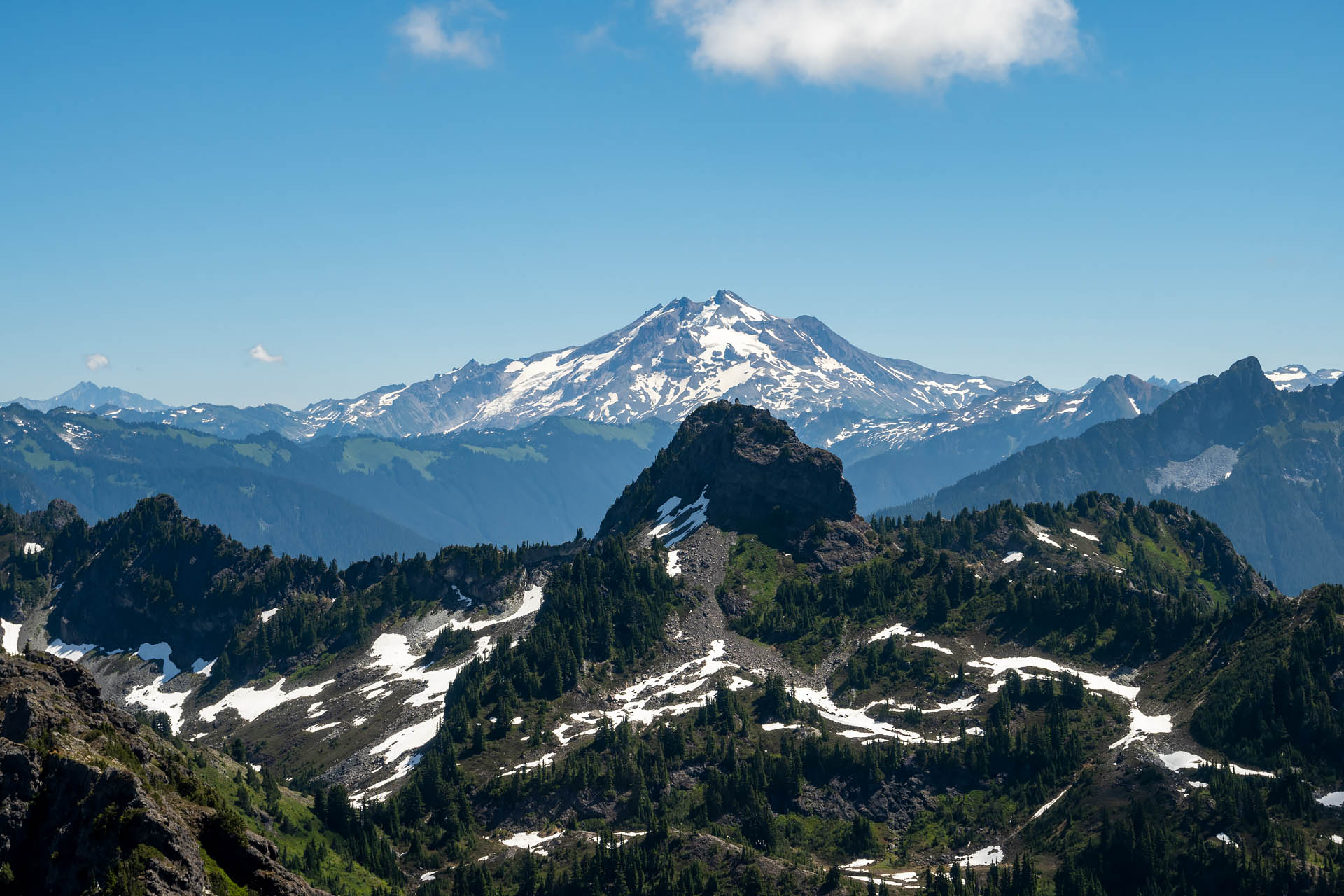 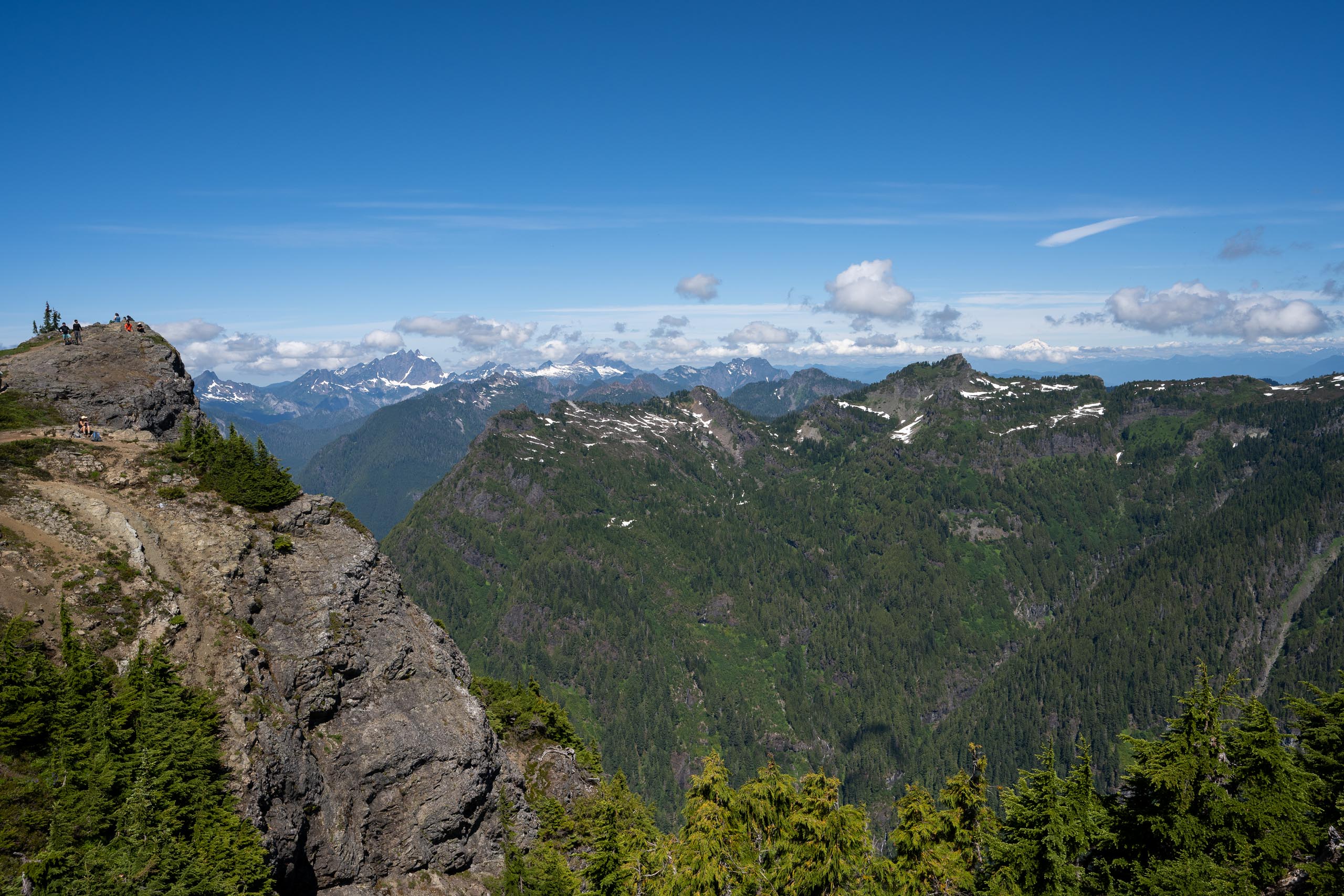 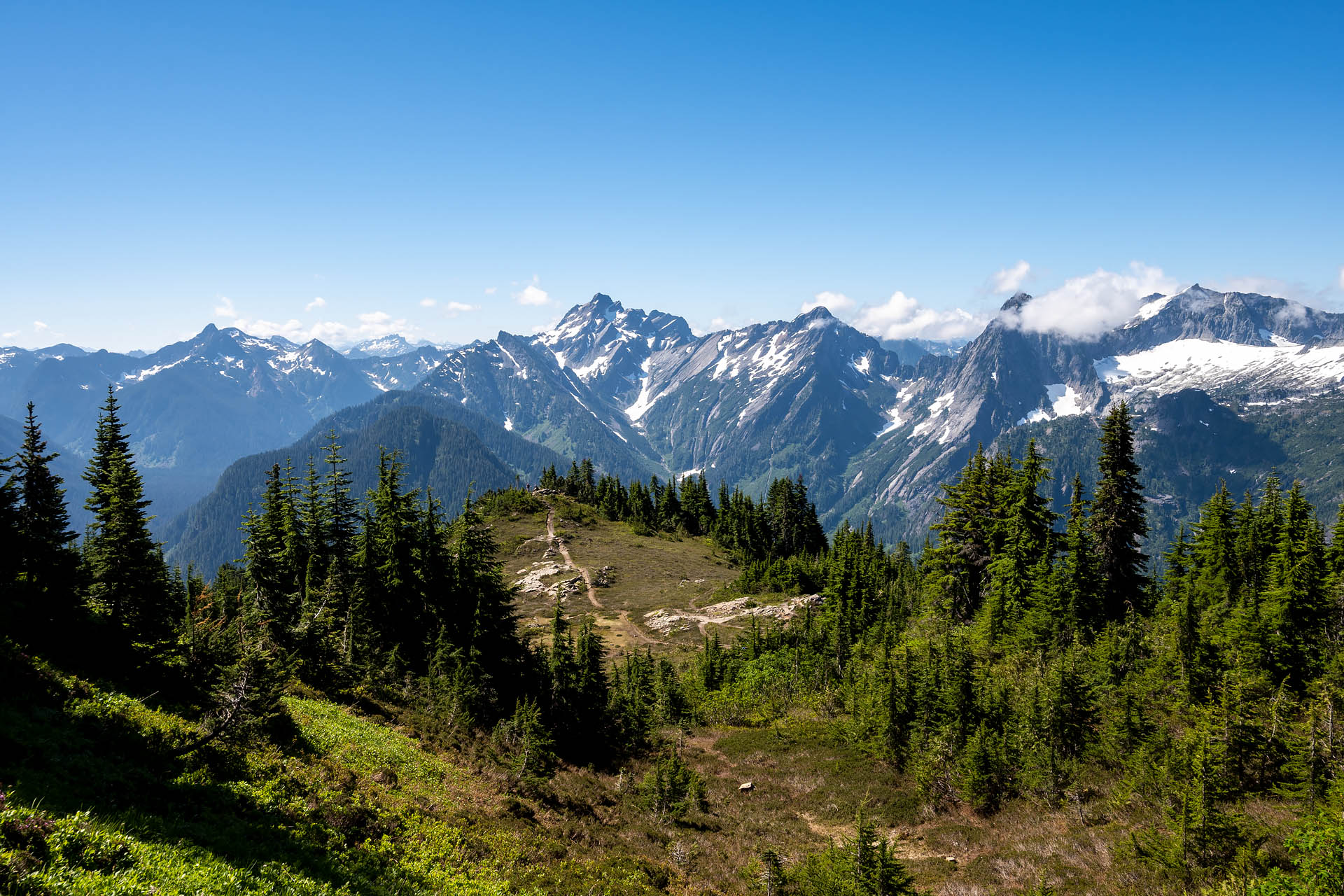 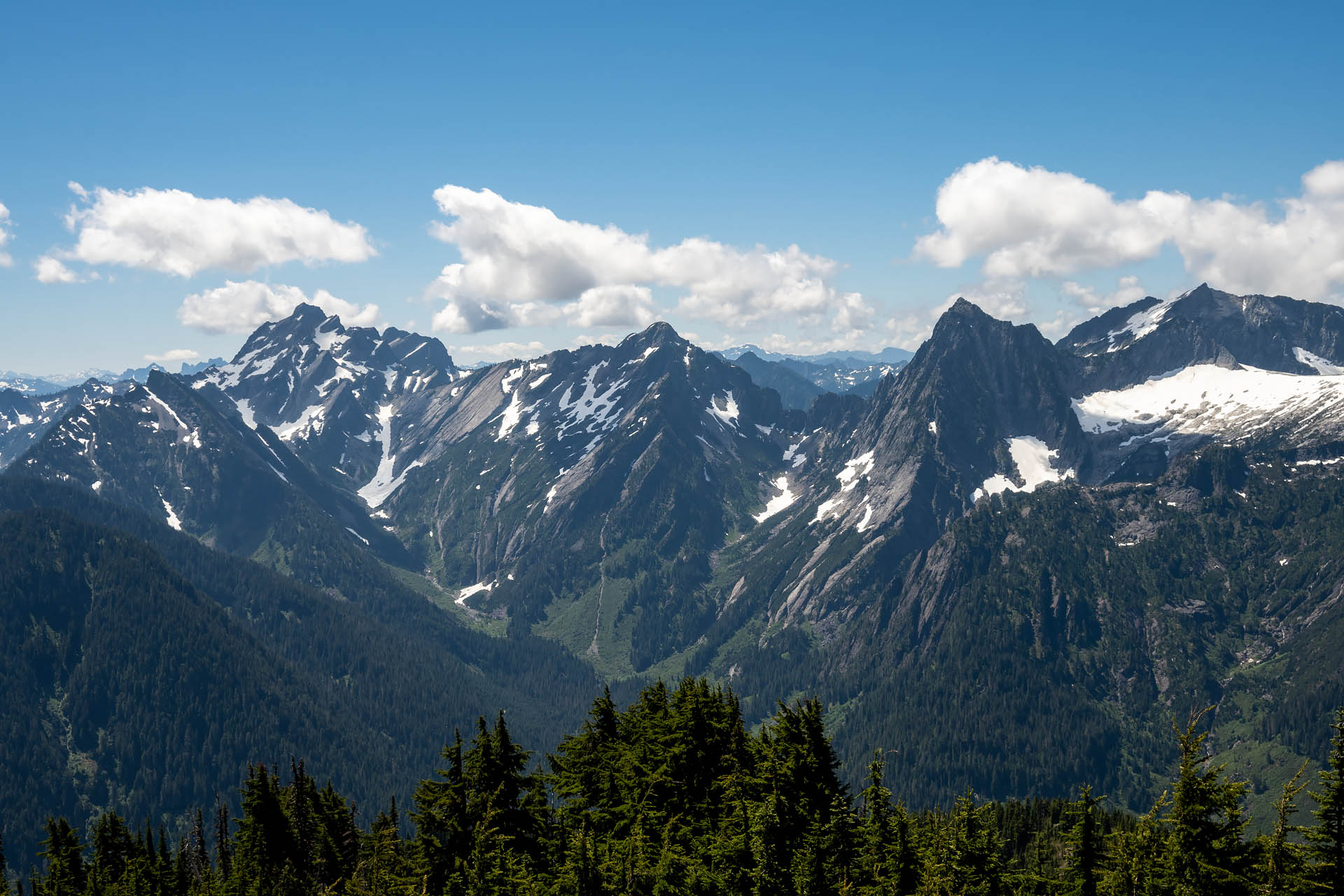 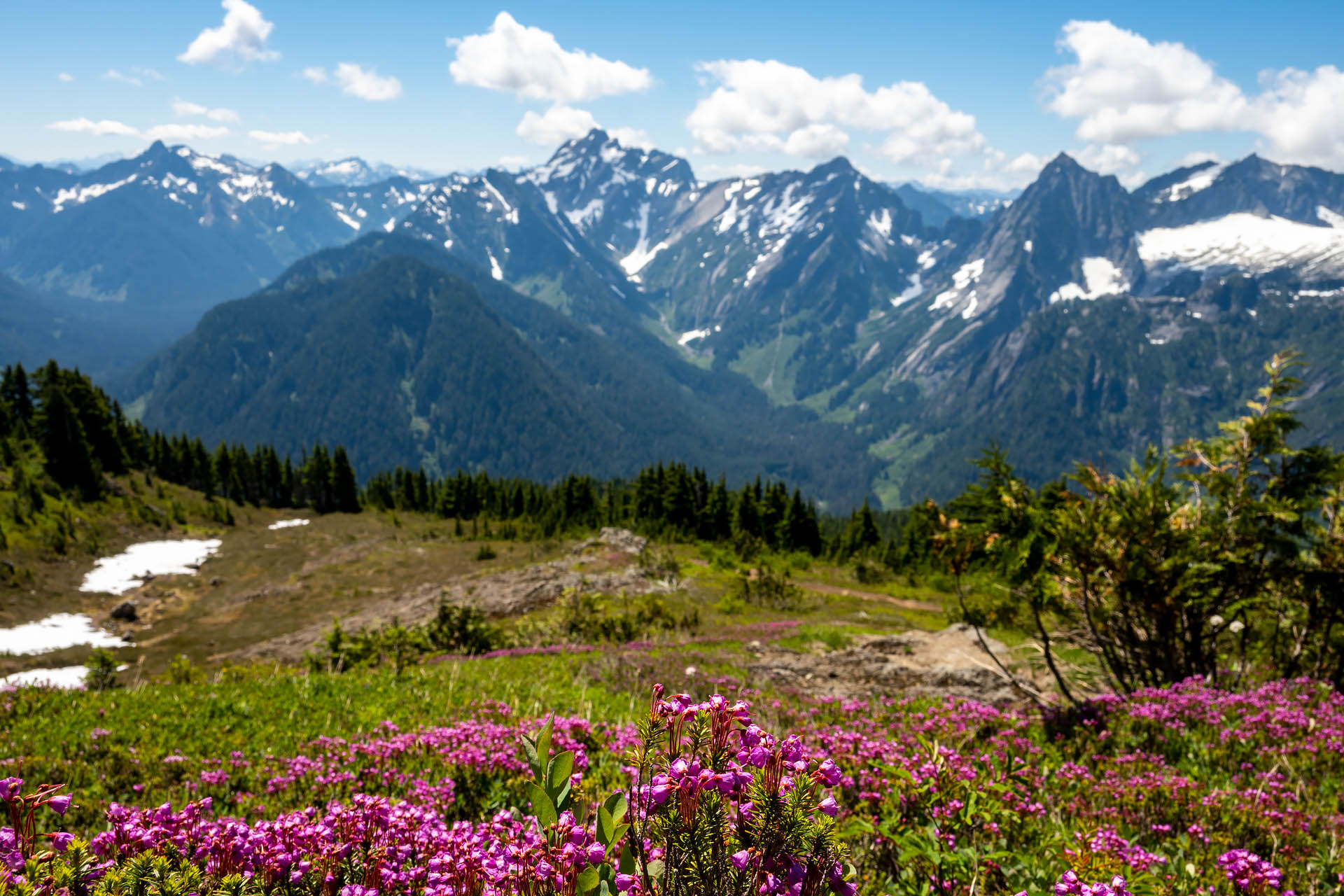 When we first arrived in Snohomish, this peak hadn’t been on our radar. It was actually recommended to us by a fellow hiker we met on a cloudy afternoon atop Granite Mountain. Since most of her favorite hikes aligned with what we’d picked out for our Cascadian summer, we figured we’d give it a go. In the end, we weren’t disappointed. The location and views were totally worth it, we were grateful for a trail that thawed out quite a bit sooner than many others further north. 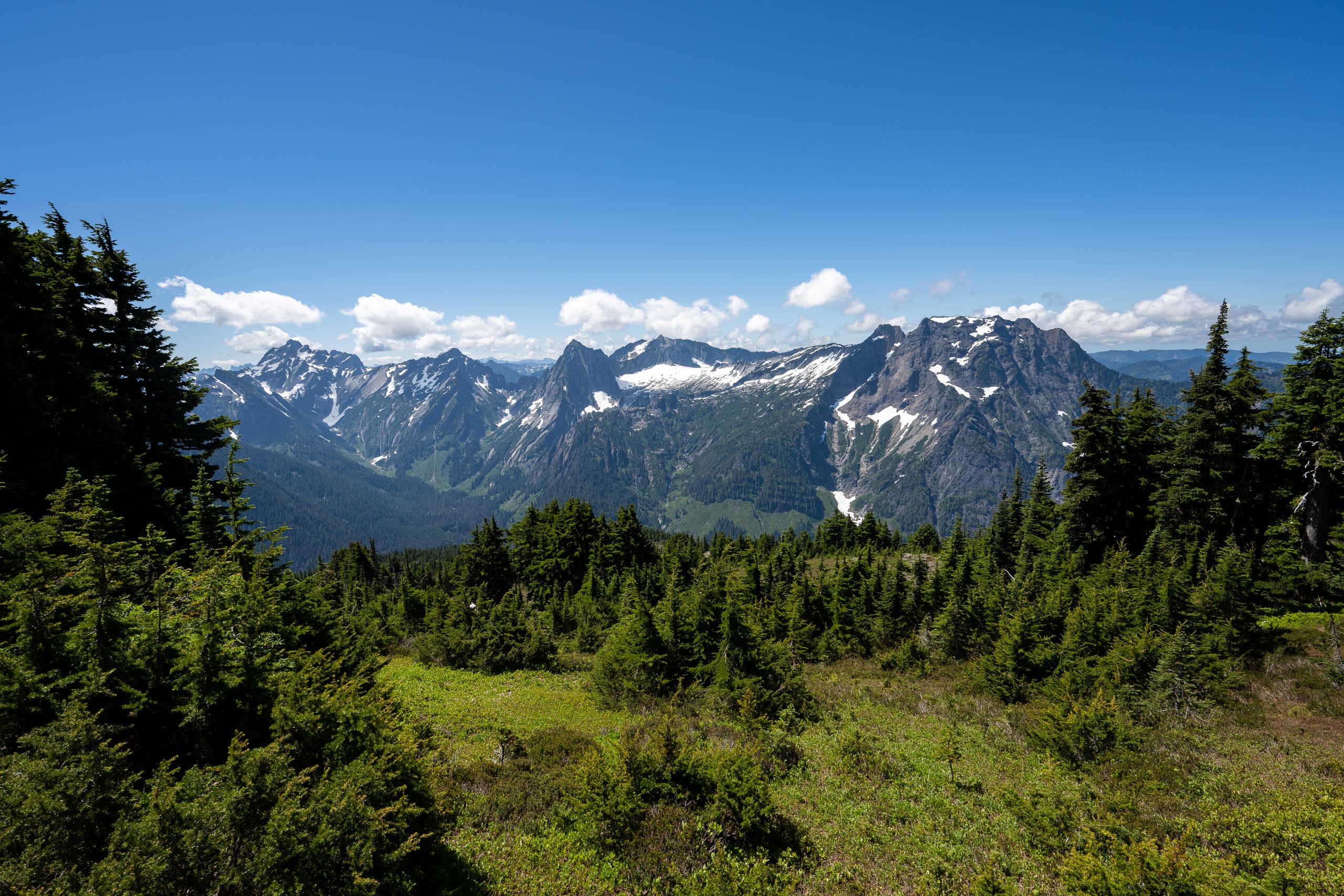 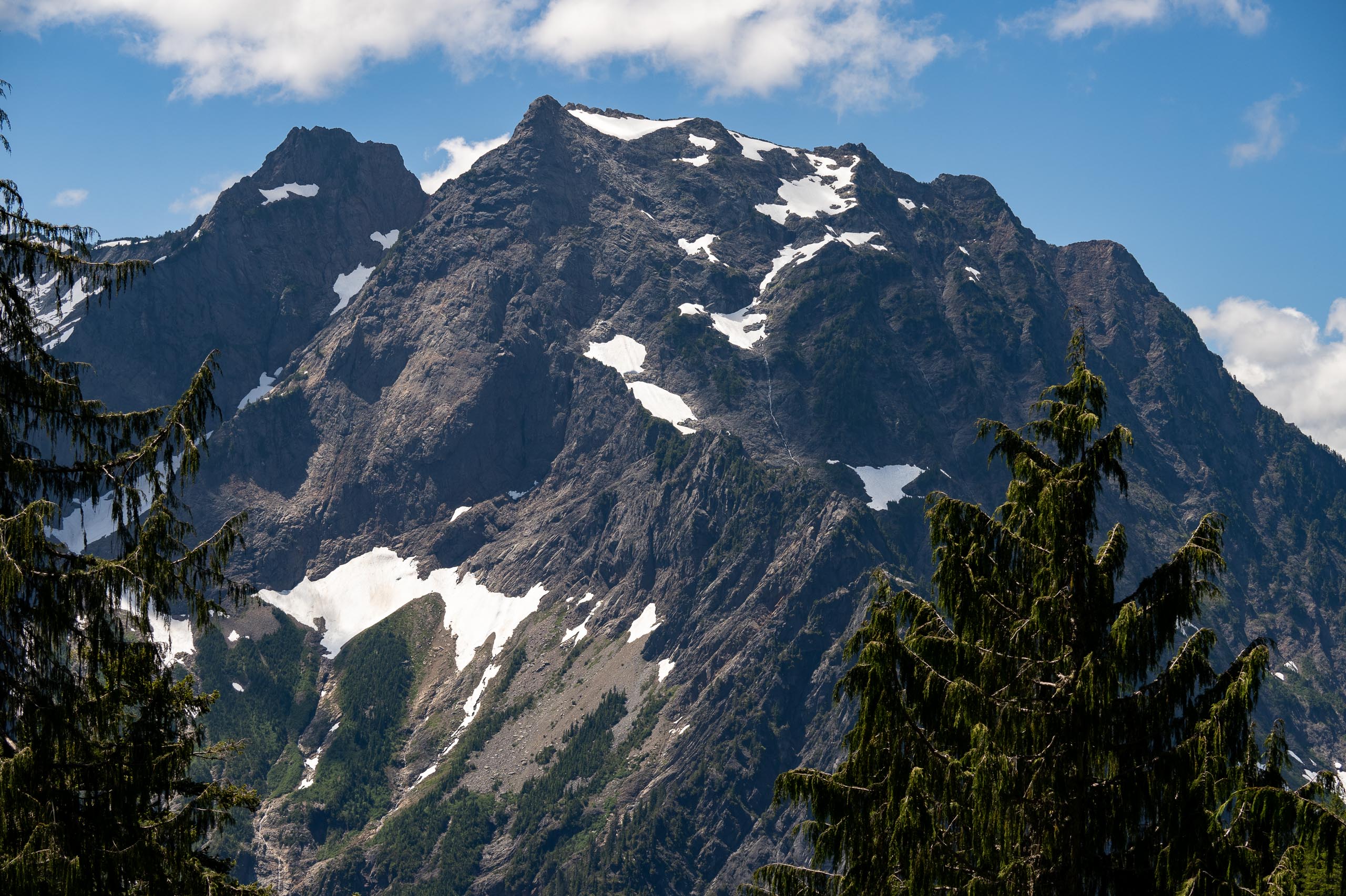 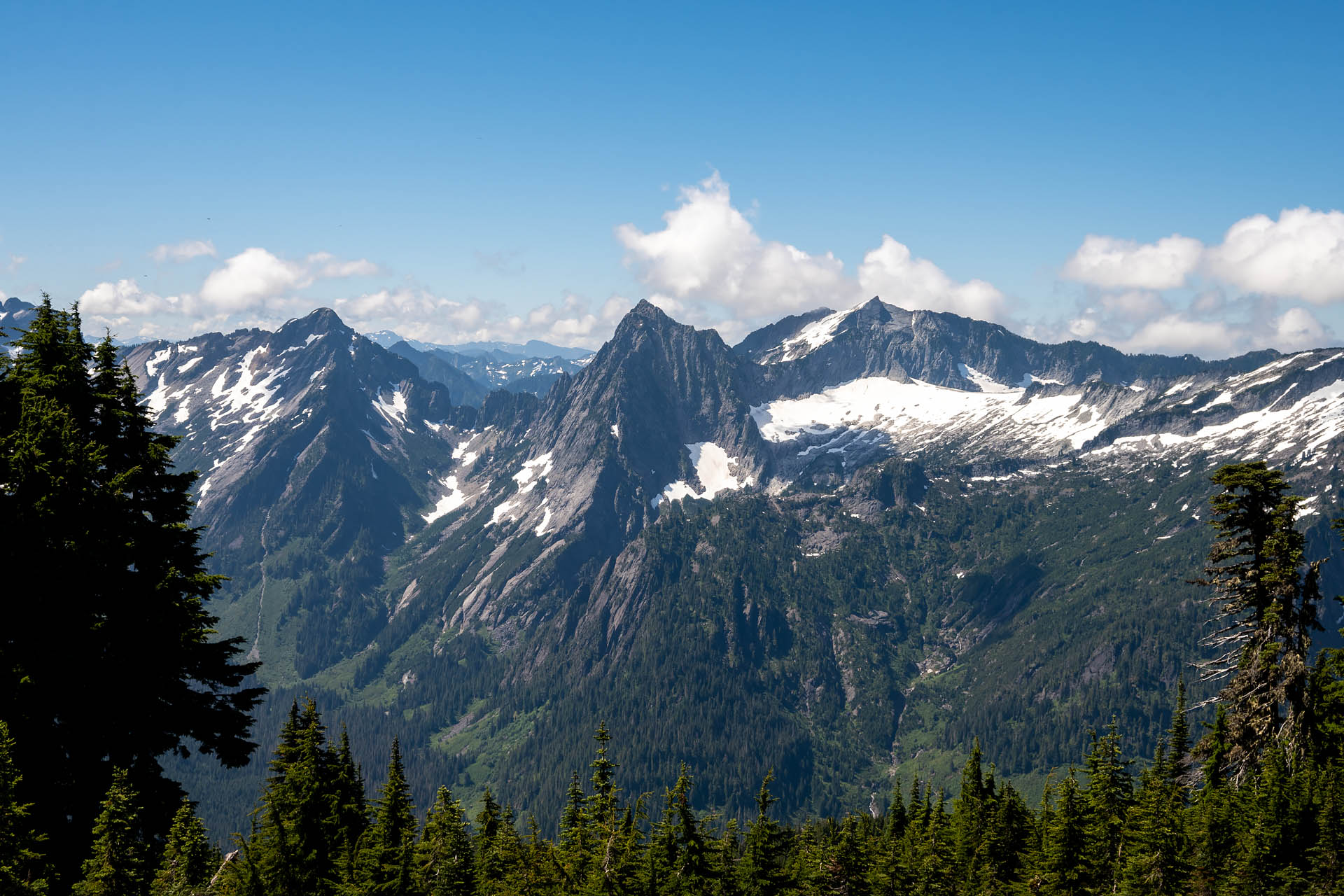 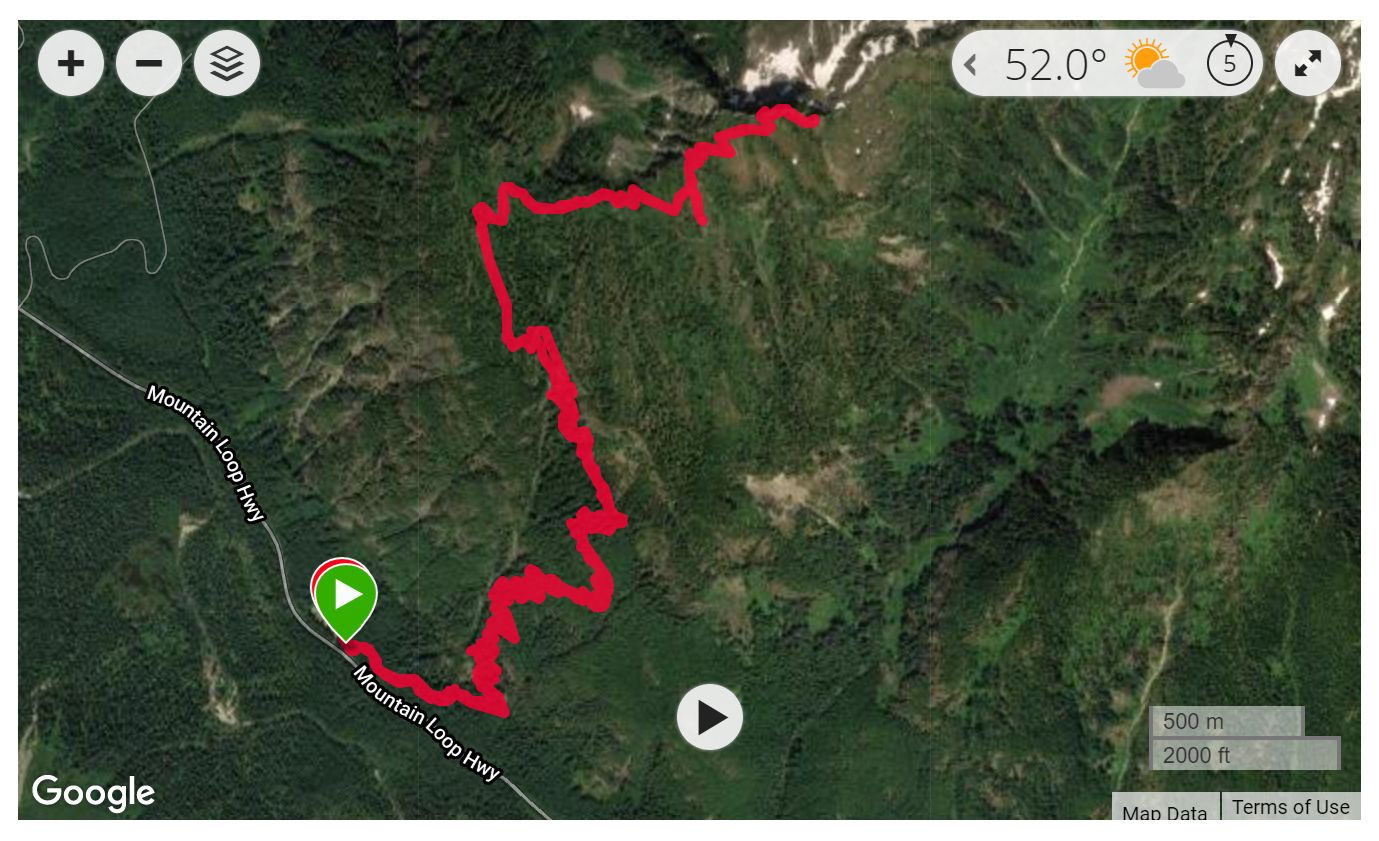