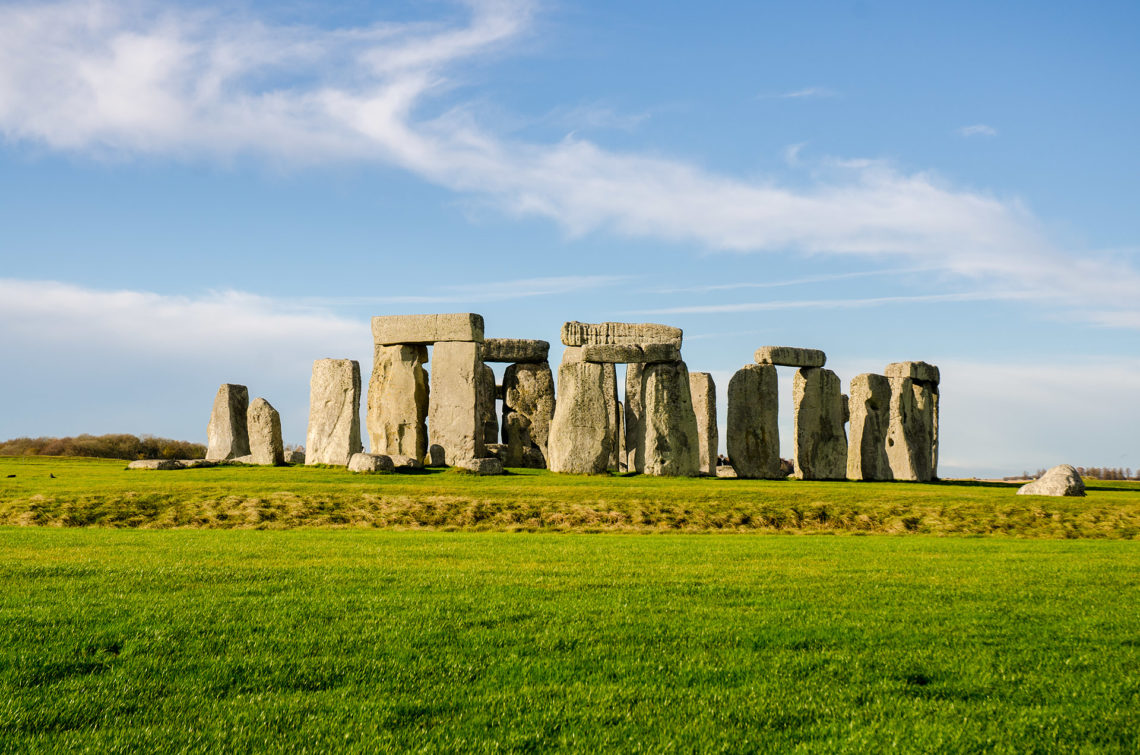 About 90 miles southwest of London stands the famous prehistoric monument of Stonehenge. Though the stone circle is the most well-known monument in the area, the history of the area is actually far more substantial than just the visible rocks. More than 4,000 years prior to any construction within the circle of Stonehenge, there exists evidence of the area being used for spiritual or burial purposes. Large wooden poles stood in the area during the Mesolithic period, and leading up to the construction of the circles, large cursus monuments and barrows had been built in the area. It’s suggested that the area was used for these purposes because it may have been a more open landscape than much of the rest of England at the time.

Though the circular shape of Stonehenge dates back to around 3,000 BC, rocks were not added to the monument until 500 years later, and rearranged several times during the ensuing centuries. It was not until sometime after 2,000 BC that the current shape of Stonehenge was finalized. Its usage is the subject of much speculation; the alignment of the stones with the summer solstice has some historians suggesting that the monument was used for astronomical purposes, while the human remains unearthed suggest it may have been a ceremonial burial site. Nobody is entirely certain why the site was originally created, or what its uses have been over the ensuing centuries.

After paying a mildly exorbitant entry fee, we boarded a small shuttle to be taken to the site. Not far from the entrance, Jenn was (naturally) entranced by one of the rangers who had some small nuts and was feeding a large, but polite, gathering of rooks who were taking turns sitting on the ranger’s head. Being the bird-friendly travelers we are, Jenn pulled out our small package of sunflower seeds and, within moments, had the friendly black birds perched on her hand. I’m not sure what it says about us that we have more photos (and were more excited) about the hungry rooks than the Neolithic stone monument we were standing in front of, but there you go. 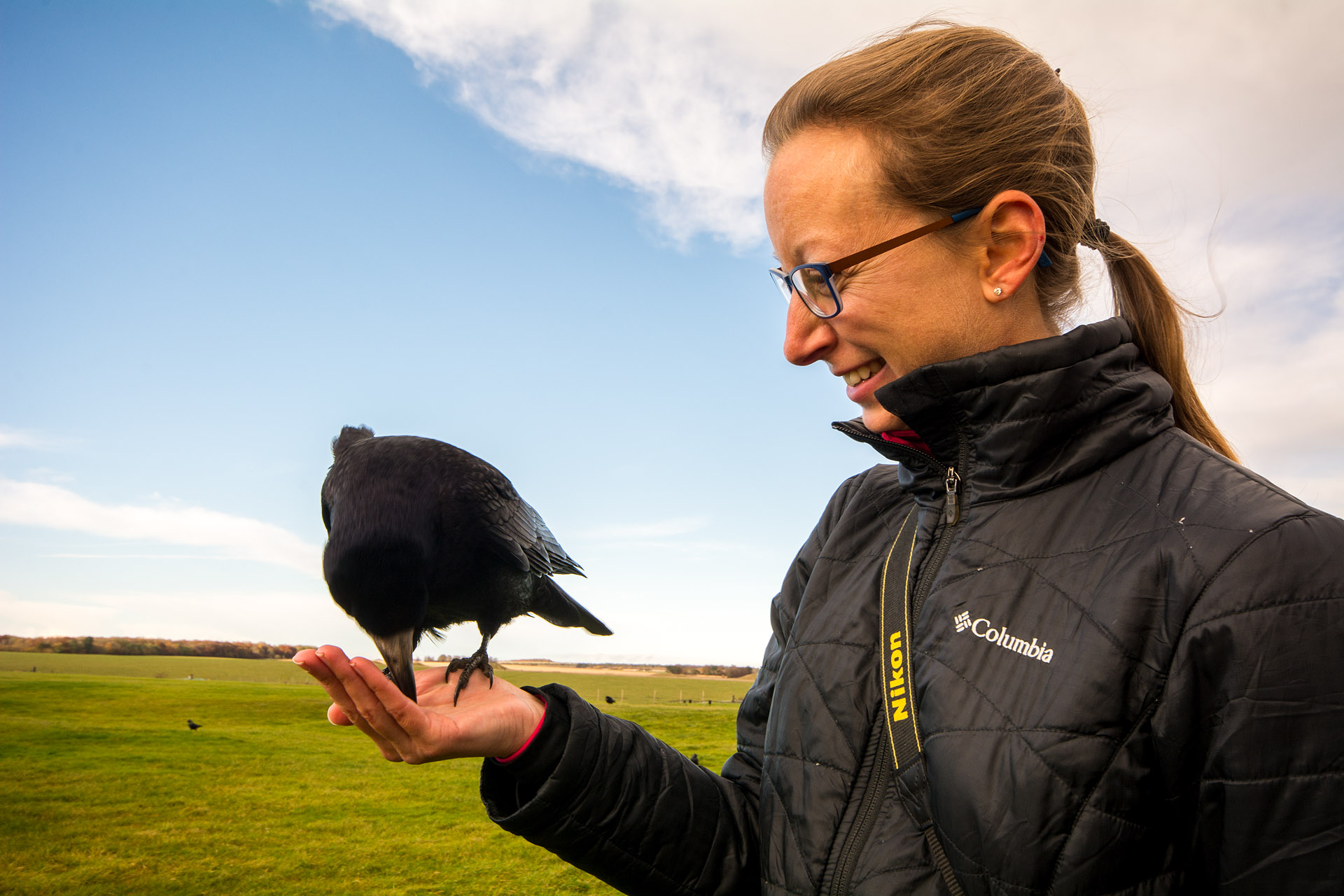 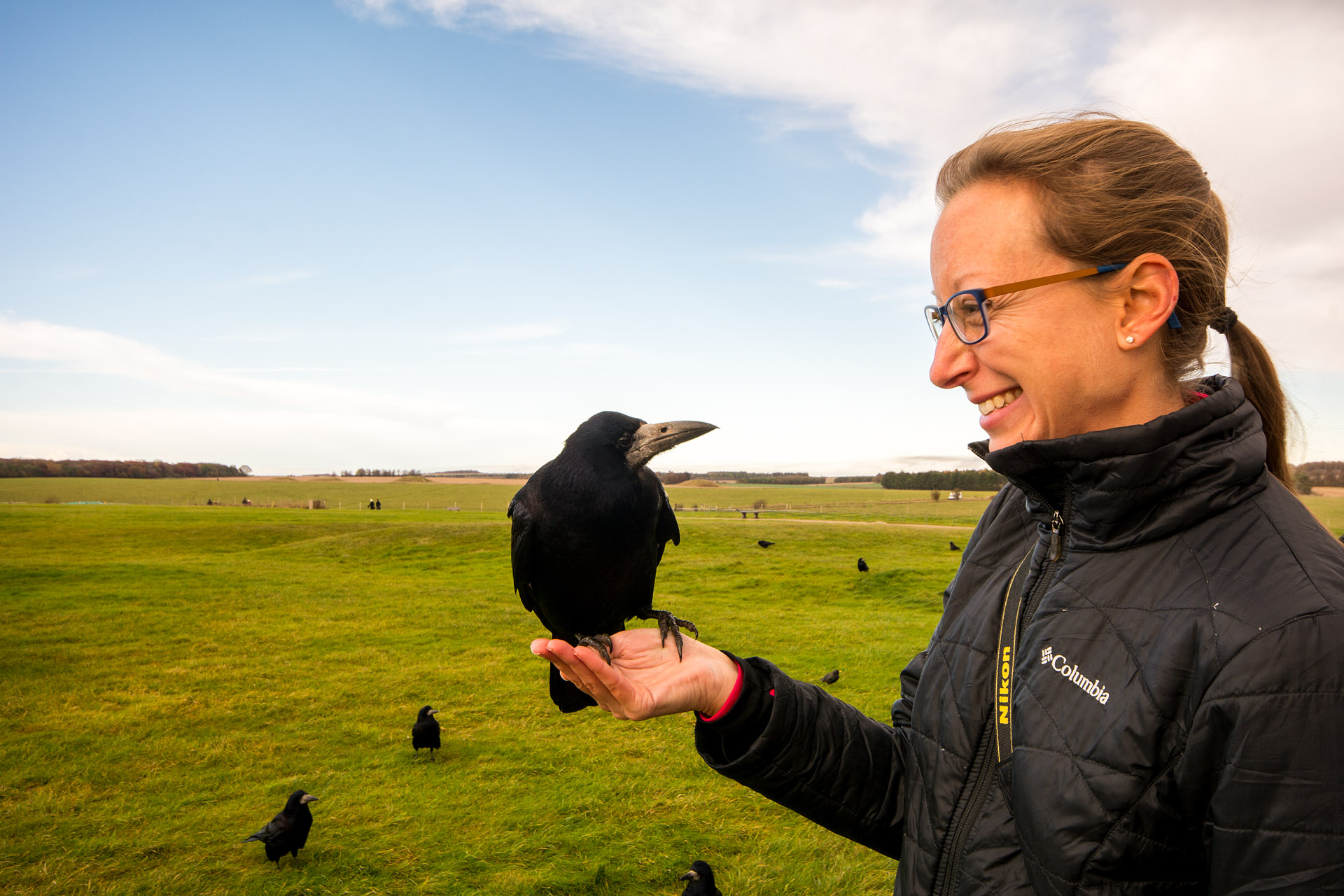 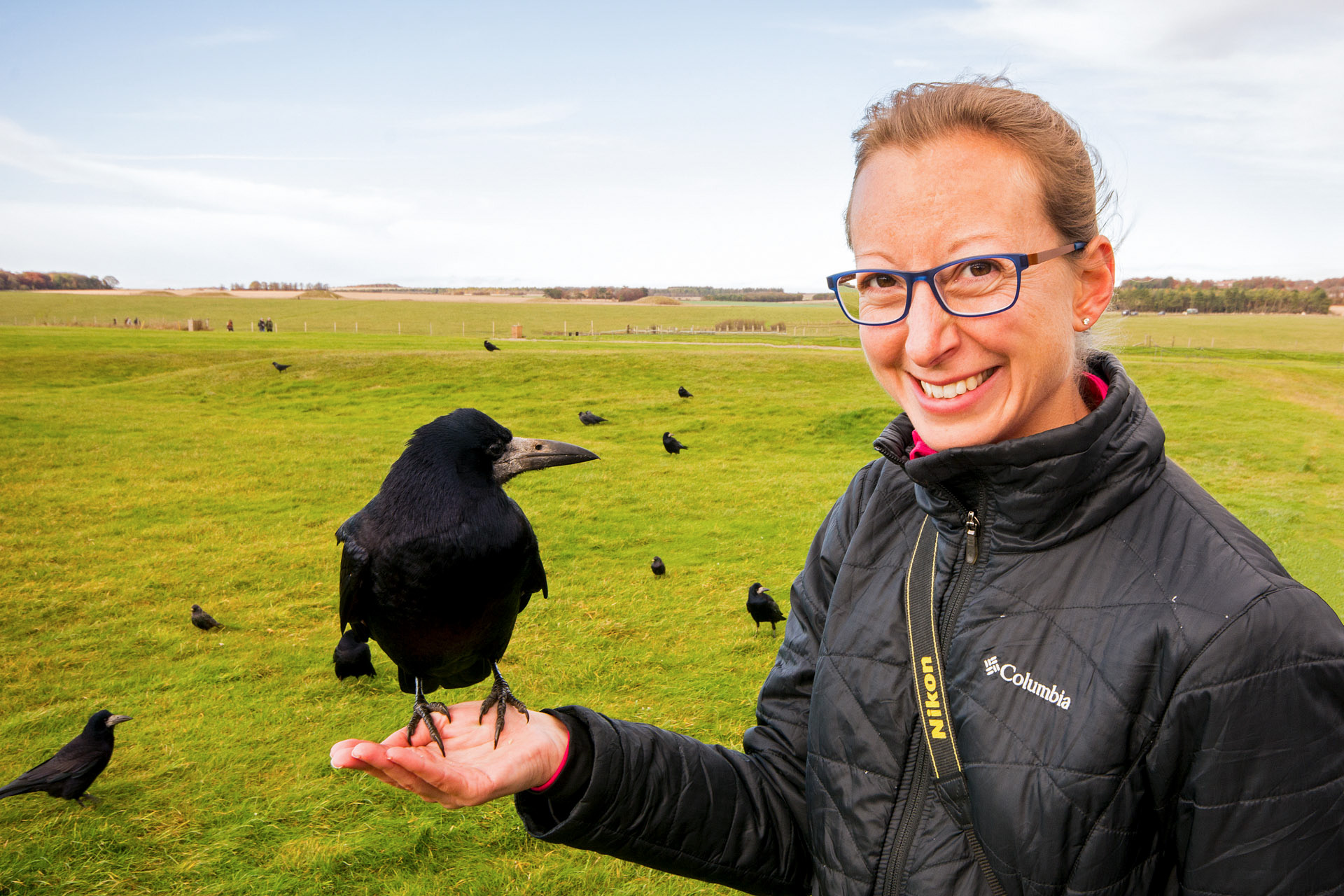 Once we got done feeding the birds, we turned back to the henge which is, in its own right, quite impressive. The large sarsens (sandstone boulders) form the outer ring of trilithons (two upright stones with the lintel, or horizontal stone, laid across the top), while the inner ring is formed of “bluestones” – a general term used to refer to stones not originating from the local area. As luck would have it, after our first circuit of the monument, the clouds parted and we were treated to some bright sunshine and a peek at the blue skies for our Stonehenge photos. Not an hour later, as we left the visitor center, the cold, blustery conditions resumed and any trace of the sun was scrubbed from the sky. 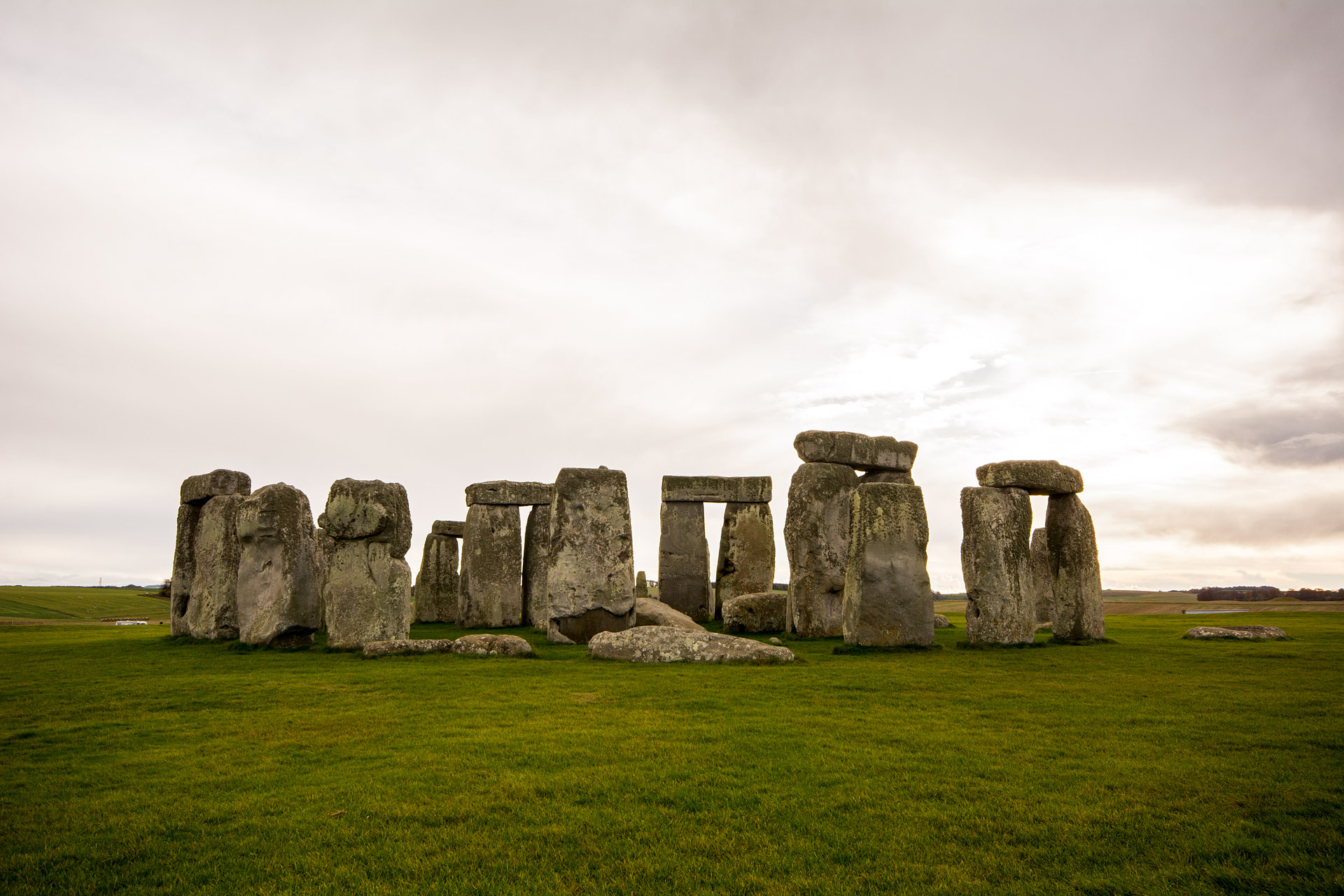 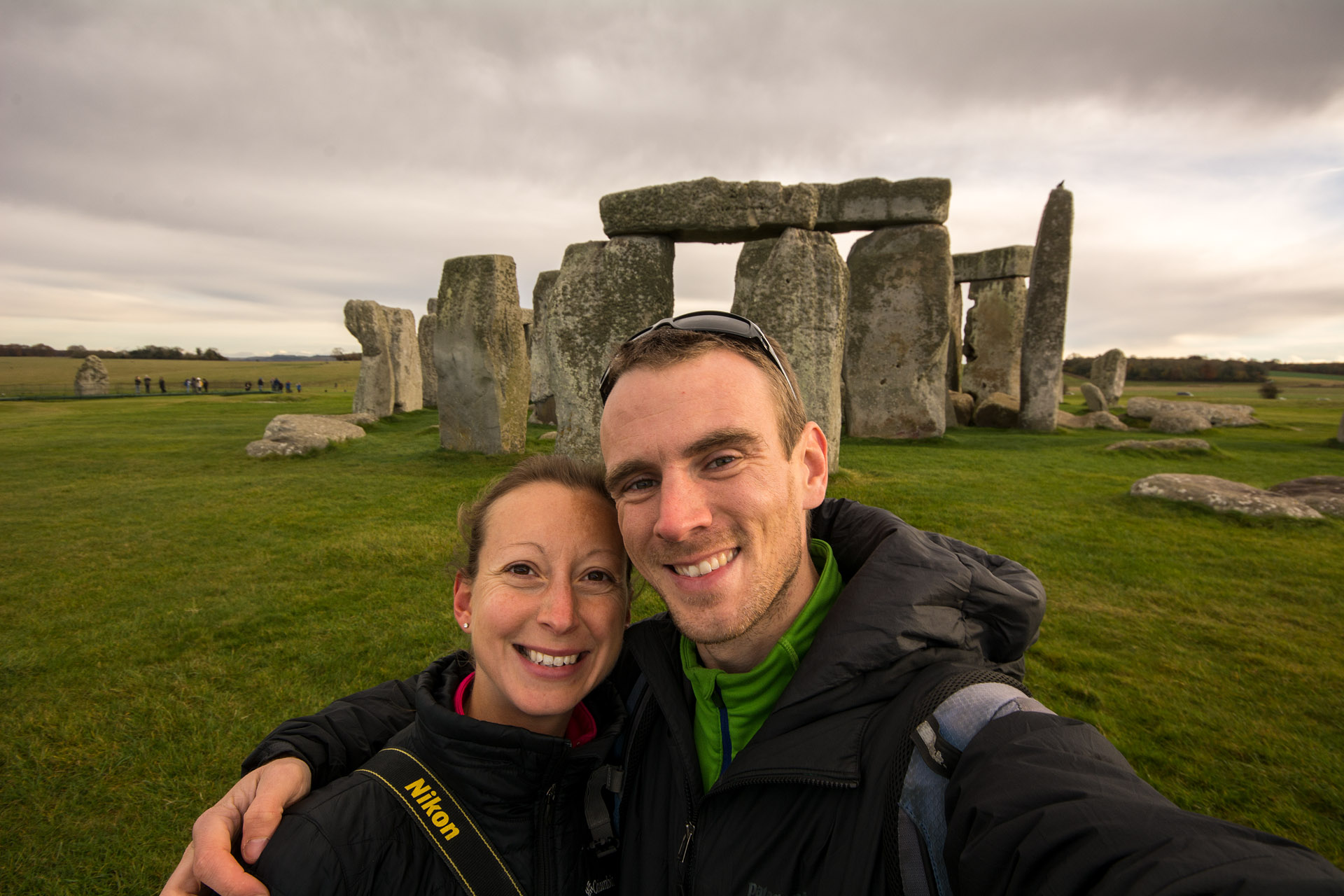 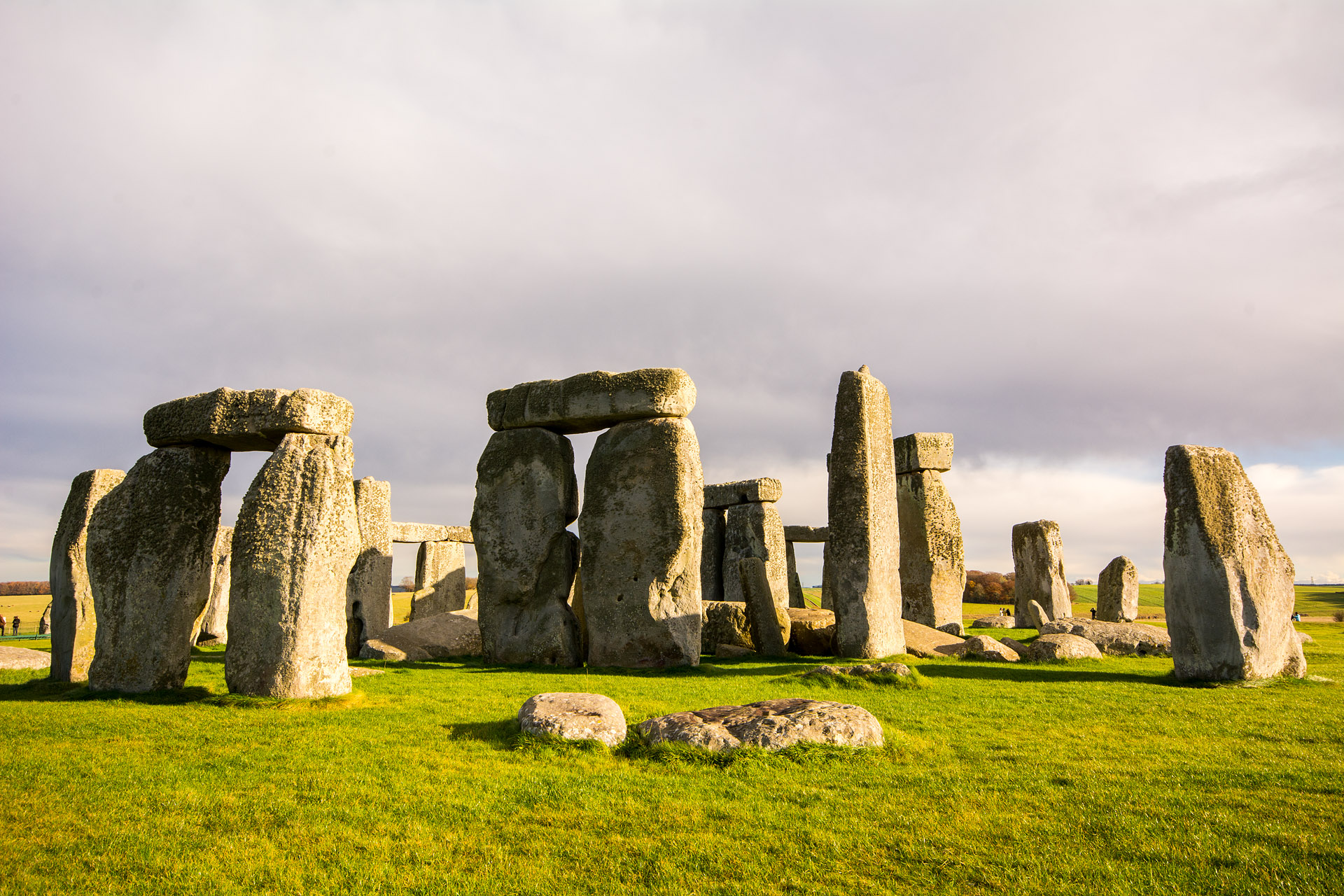 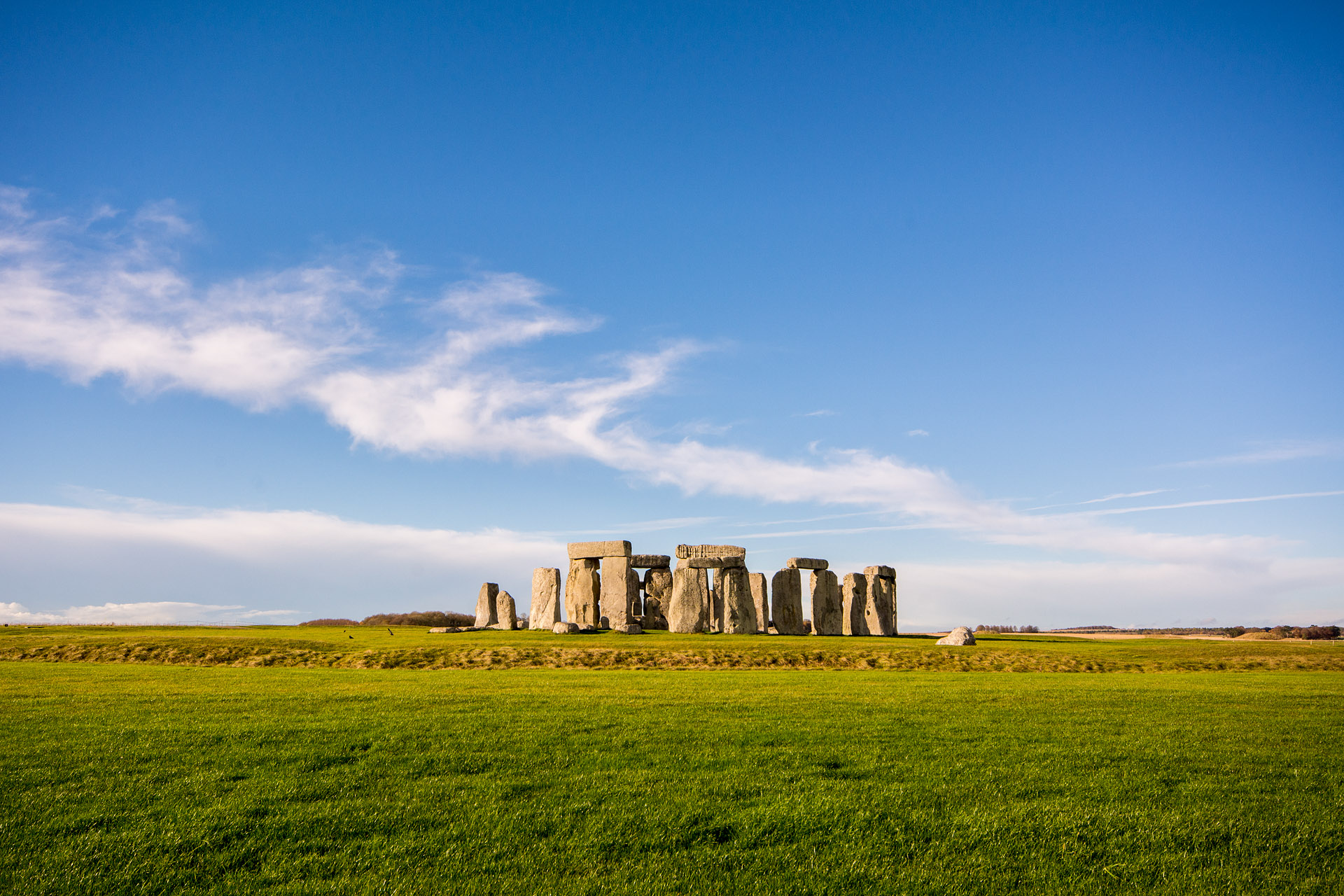 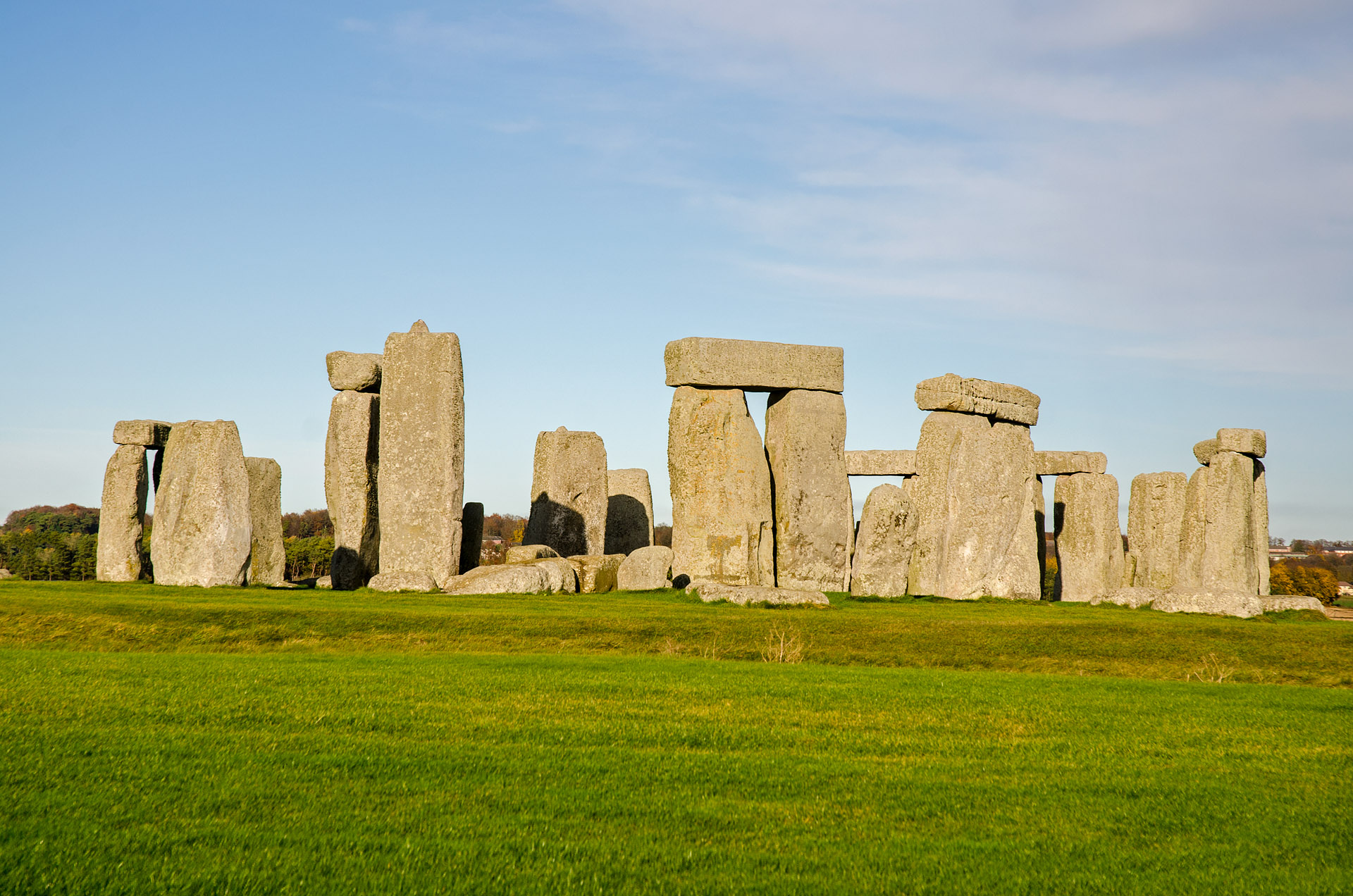 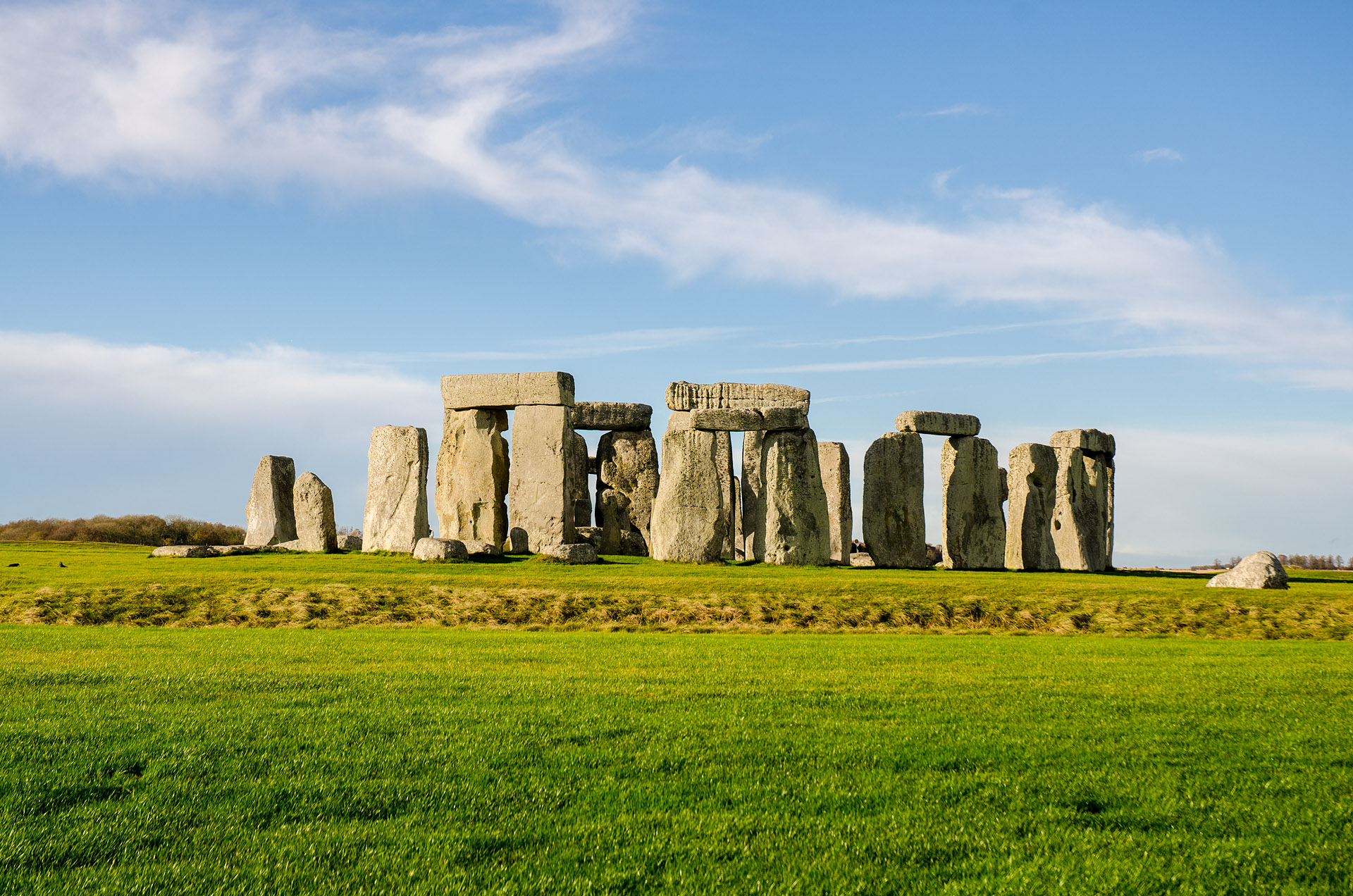 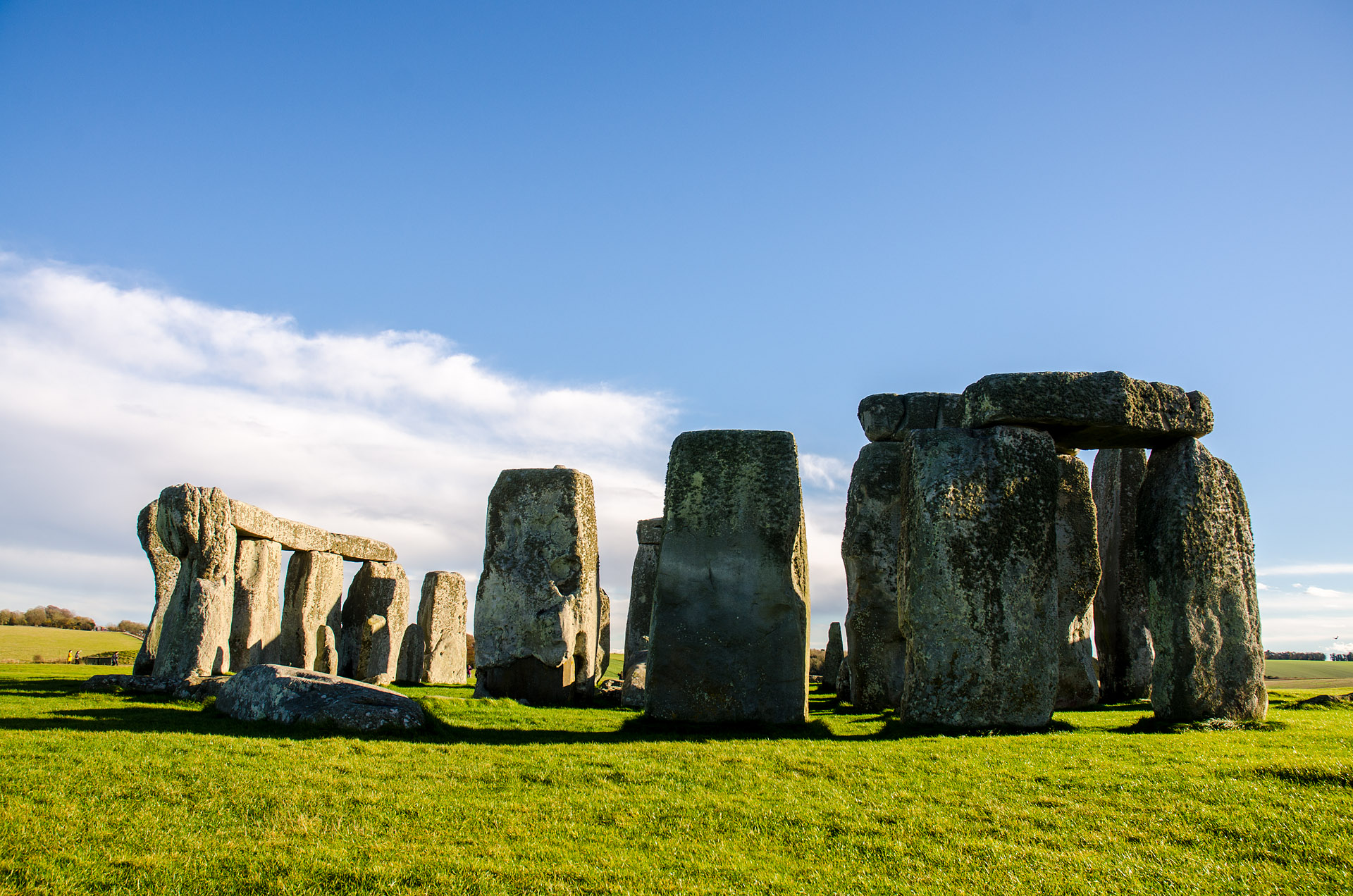 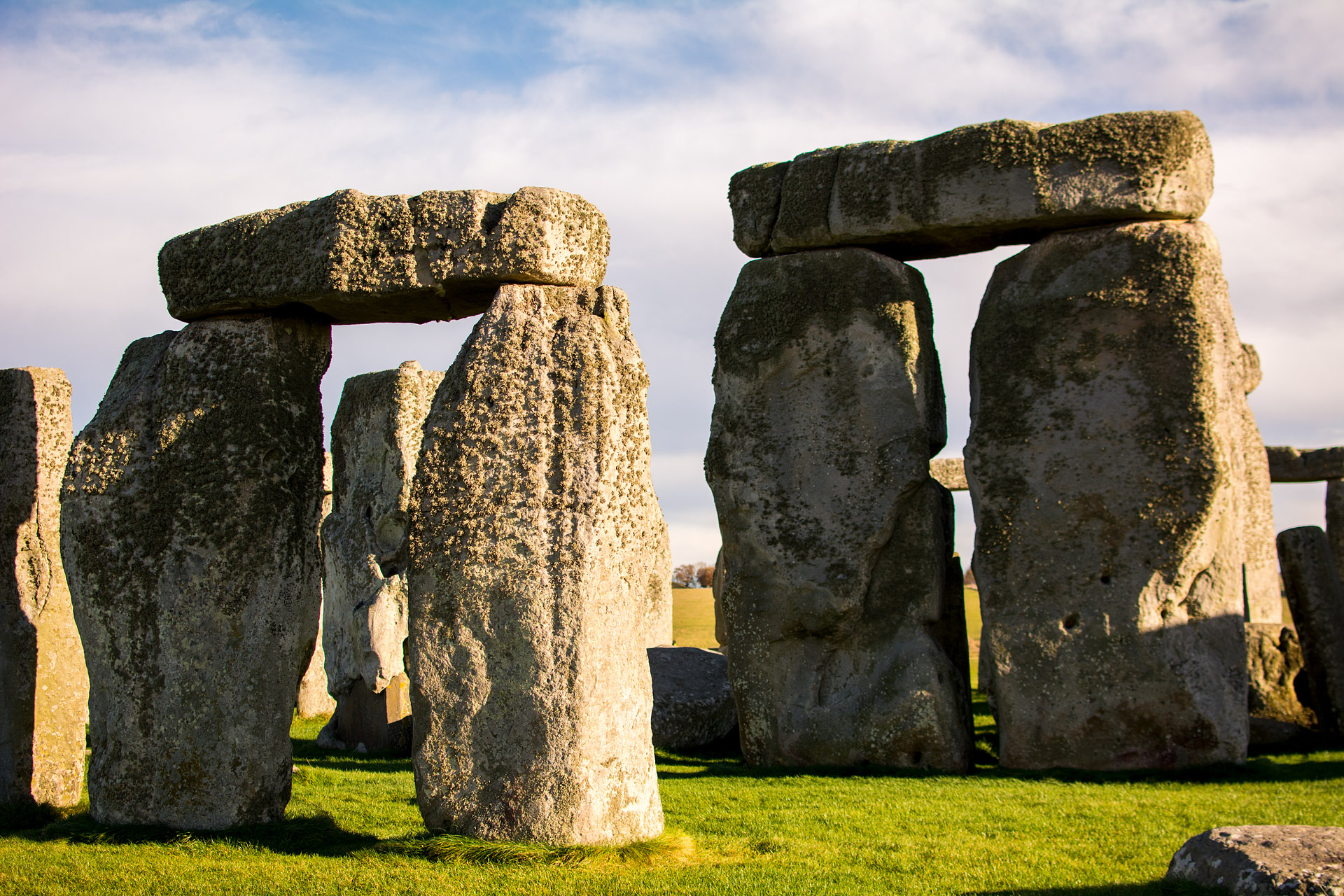 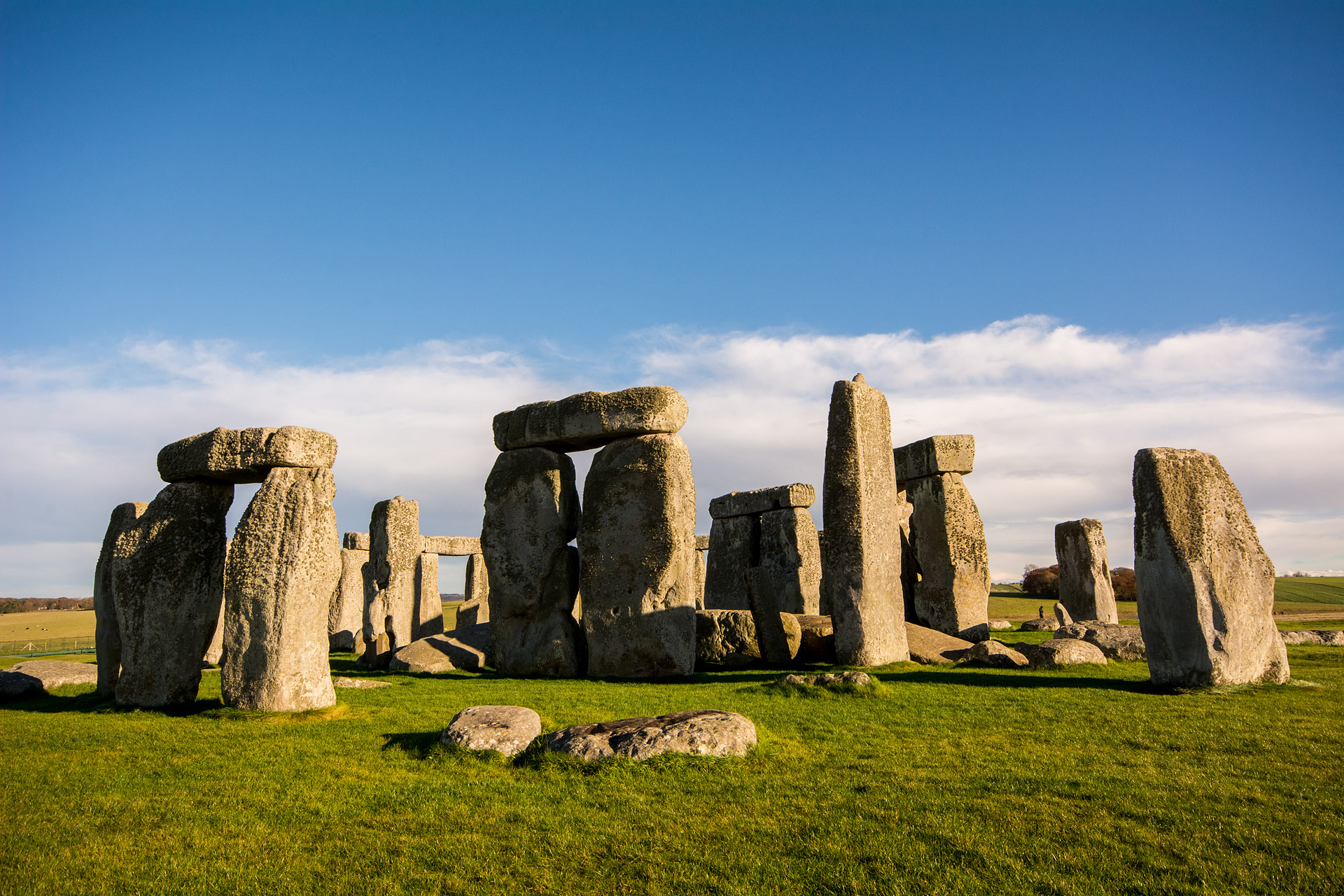 I had visited Stonehenge back in 1997 as part of a high school trip, and though the stone circle remains the same, they have added an extensive visitor center. Along with all manner of stone-related trinkets for sale, an excellent history of the region is on display, including many artifacts recovered from archeological excavations. It’s definitely worth a few moments to browse the exhibits in addition to exploring the actual monument itself.

Though we often try to avoid paying high prices for crowded venues, as one of the most recognizable landmarks in the world, it seemed silly to pass by without stopping. Despite the ticket price, busses, and other tourists (crowds were by no means oppressive, but we were in the offseason), Stonehenge is still worth a stop as a pretty interesting piece of cultural history.