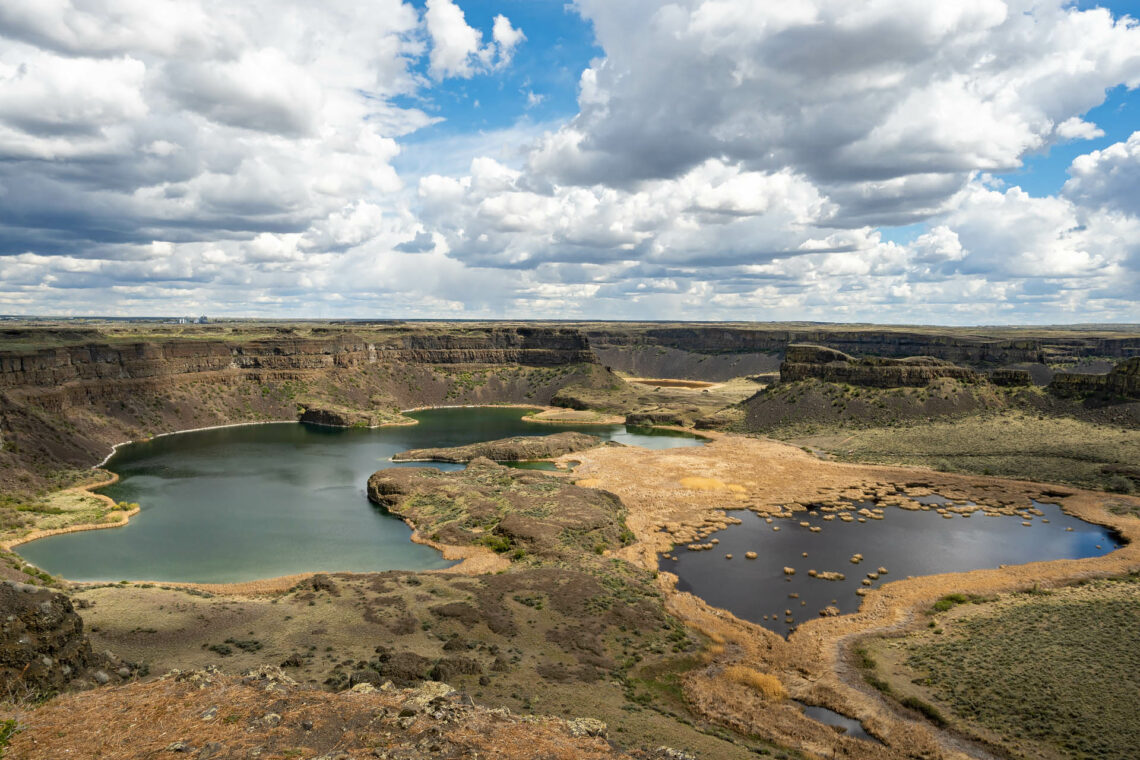 When Stephan and I picked Washington state for our next temporary home, the alpine trails of the Cascade Mountains were the driving force behind that decision. However, having moved to the area in early spring of a record-setting snow year, higher-elevation hiking wasn’t going to be a realistic pastime. Consequently, we temporarily turned our attention a couple hours east. While we knew very little about the part of the state beyond the mountains, it turned out to be a pretty interesting area to explore.

One of those curious places was Sun Lakes–Dry Falls State Park. The 3,800-acre park is located in Washington’s Channeled Scablands – an expanse of barren, eroded plains along the Columbia Plateau that are crisscrossed by deep coulees where glacial streams once flowed. The basaltic plateau first formed from Cenozoic Era-eruptions that occurred 15 to 17 million years ago. However, it was some of the most catastrophic flooding in Earth’s history that more recently transformed this unique landscape.

Near the end of the last Ice Age – 13,000 to 15,000 years ago – the Missoula Floods inundated much of central and eastern Washington. During this 2,000 year period, it’s believed that between forty and one hundred mega-floods swept across the region. At some point during this glacial epoch, a massive sheet of ice dammed the Clark Fork River, forming glacial Lake Missoula (a vast lake stretching across parts of present-day Montana and Idaho). At its largest, the ice dam was thought to have been two miles wide, thirty miles long, and a half mile tall. The dam eventually failed, sending billions of tons of water into eastern Washington. Floodwaters raced toward the Pacific along the Columbia River Gorge at speeds of up to 60 mph, giving rise to temporary lakes that were hundreds of feet deep. Over the next two millennia, glacial Lake Missoula was repeatedly dammed and breached, sending floodwaters into the eastern half of the state with surprising frequency.

The unusual geological features we see today at Sun Lakes-Dry Falls State Park are the consequences of these unprecedented floods. While the views are stunning, the dry precipices behind Dry Falls Lake don’t really look like anything overtly extraordinary. However, 10,000 years ago, the world’s largest waterfall thundered over this escarpment. With the scalloped cliffs stretching 3.5 miles and standing 400 feet tall, the torrent would have been more than four times the size of Niagara Falls. Scientists believe that this was the largest cataract ever on Earth, and that it likely would have dwarfed any of the world’s current waterfalls.

If you’re interested in exploring Dry Falls more carefully, the park offers more than ten miles of hiking trails across the windswept scablands. The most popular route, and most easily discernible trail, is the Umatilla Rock Trail. Clocking in at just under three miles, the dusty path circumnavigates Umatilla Rock, a prominent “basalt blade” that rises sharply from the surrounding valley of Monument Coulee. 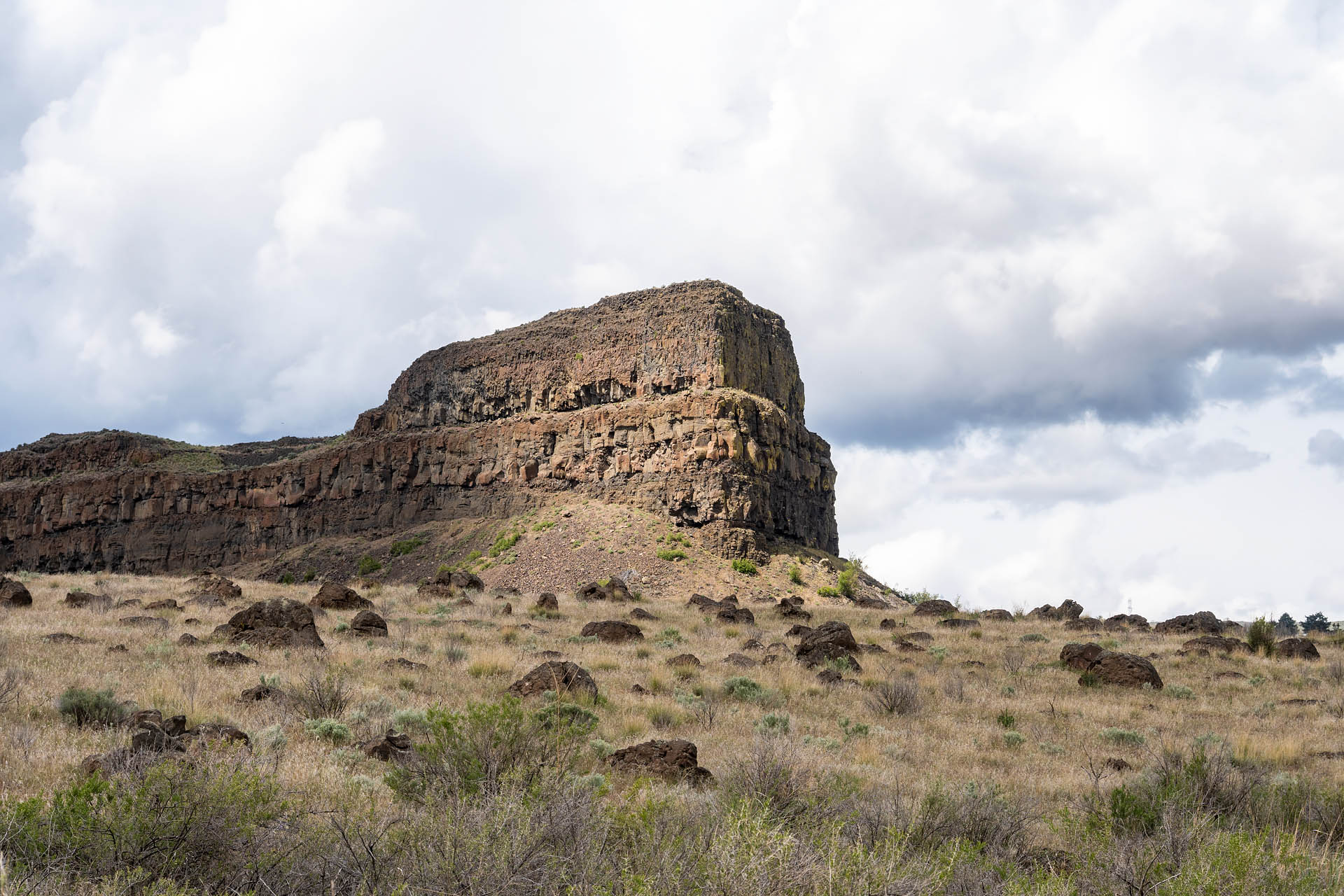 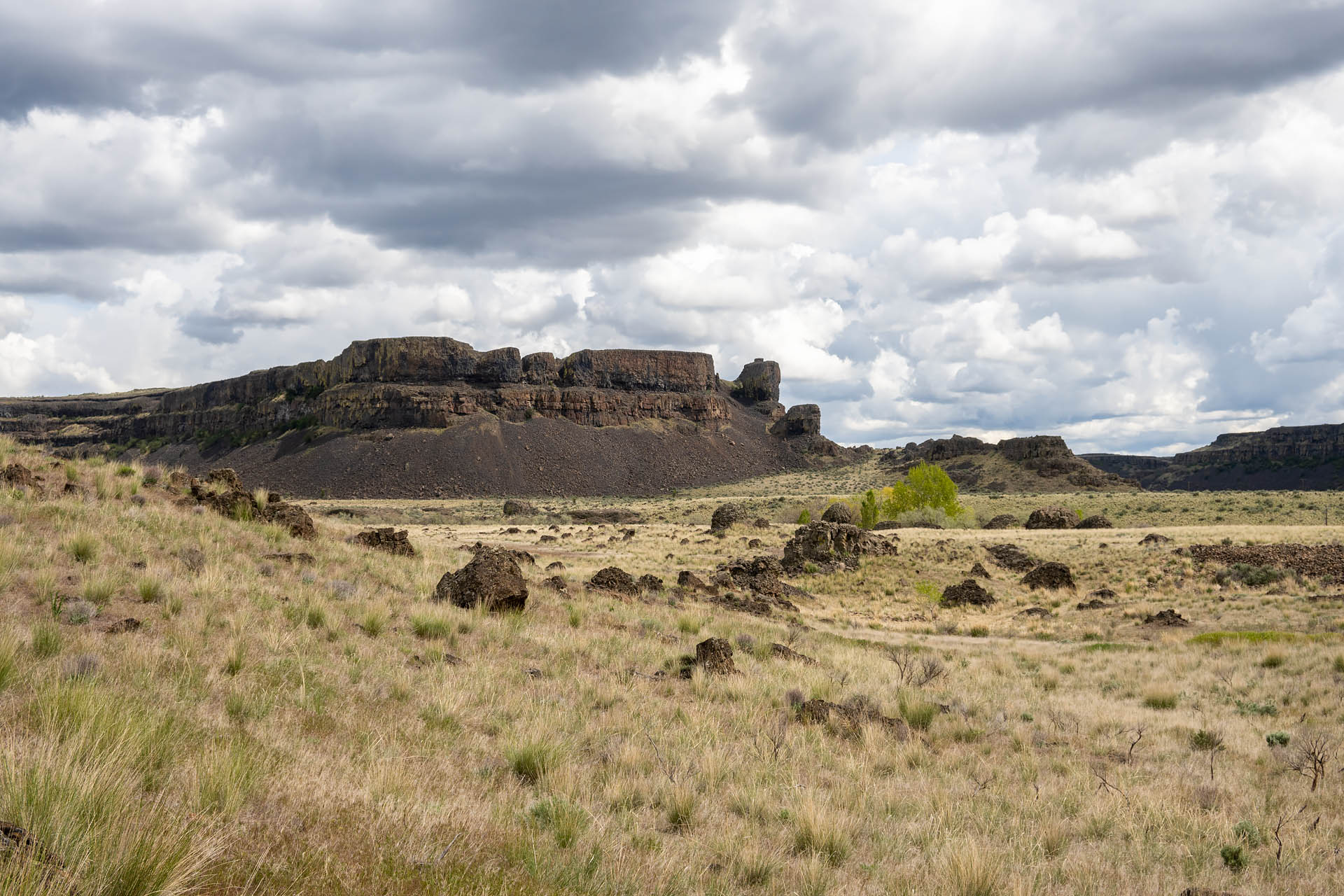 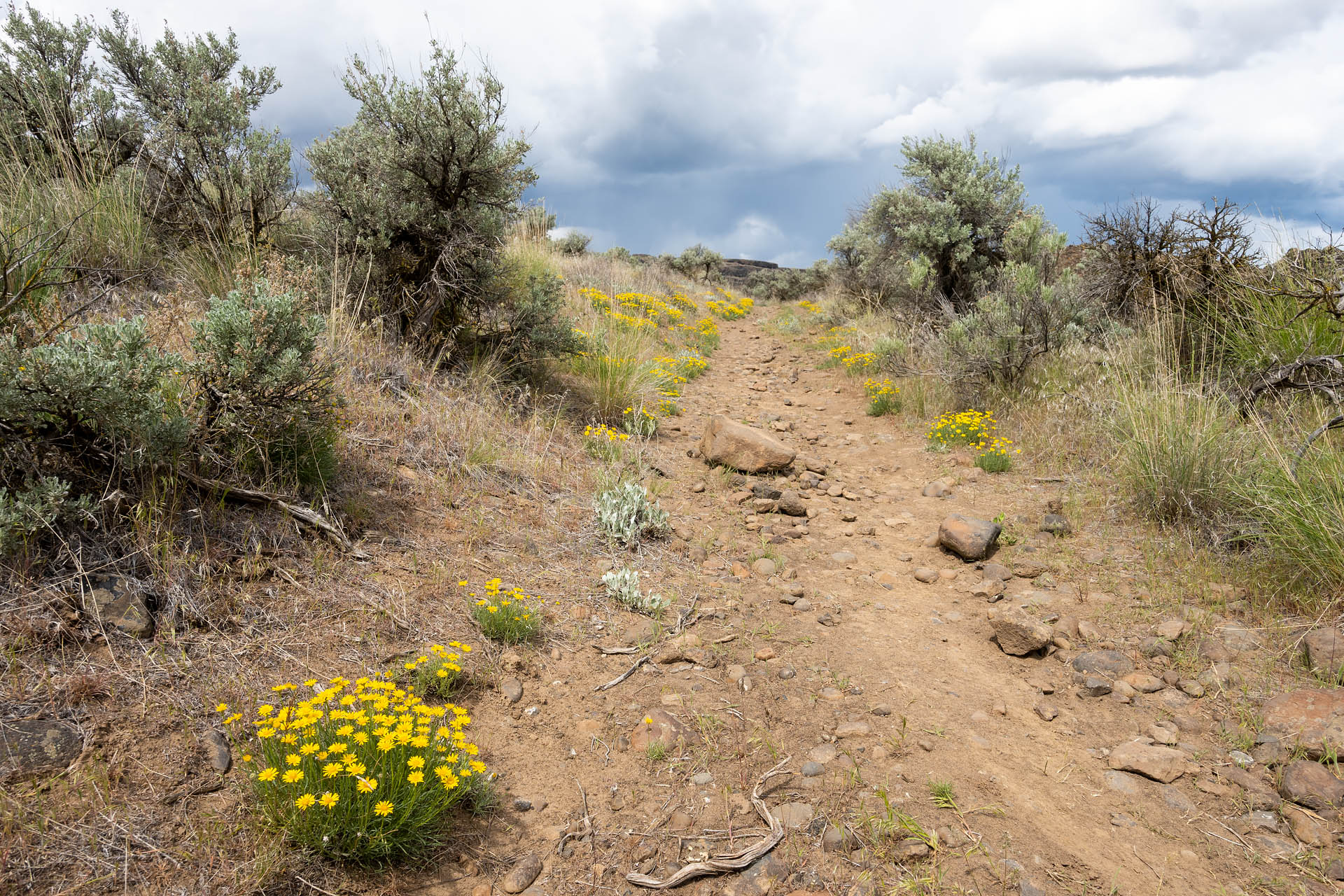 Wanting to extend the hike as much as possible, we combined the Umatilla Rock Trail with some of the shorter routes that cut across the valley. This larger circuit looped around the park’s perimeter, skirting the various lakes that pepper the otherwise arid terrain. We chose to hike counterclockwise, first following the eastern flank of Umatilla Rock. The views from this side were by far the most imposing, with the trail snaking between the sharp rock blade and the towering cliffs of Dry Falls. 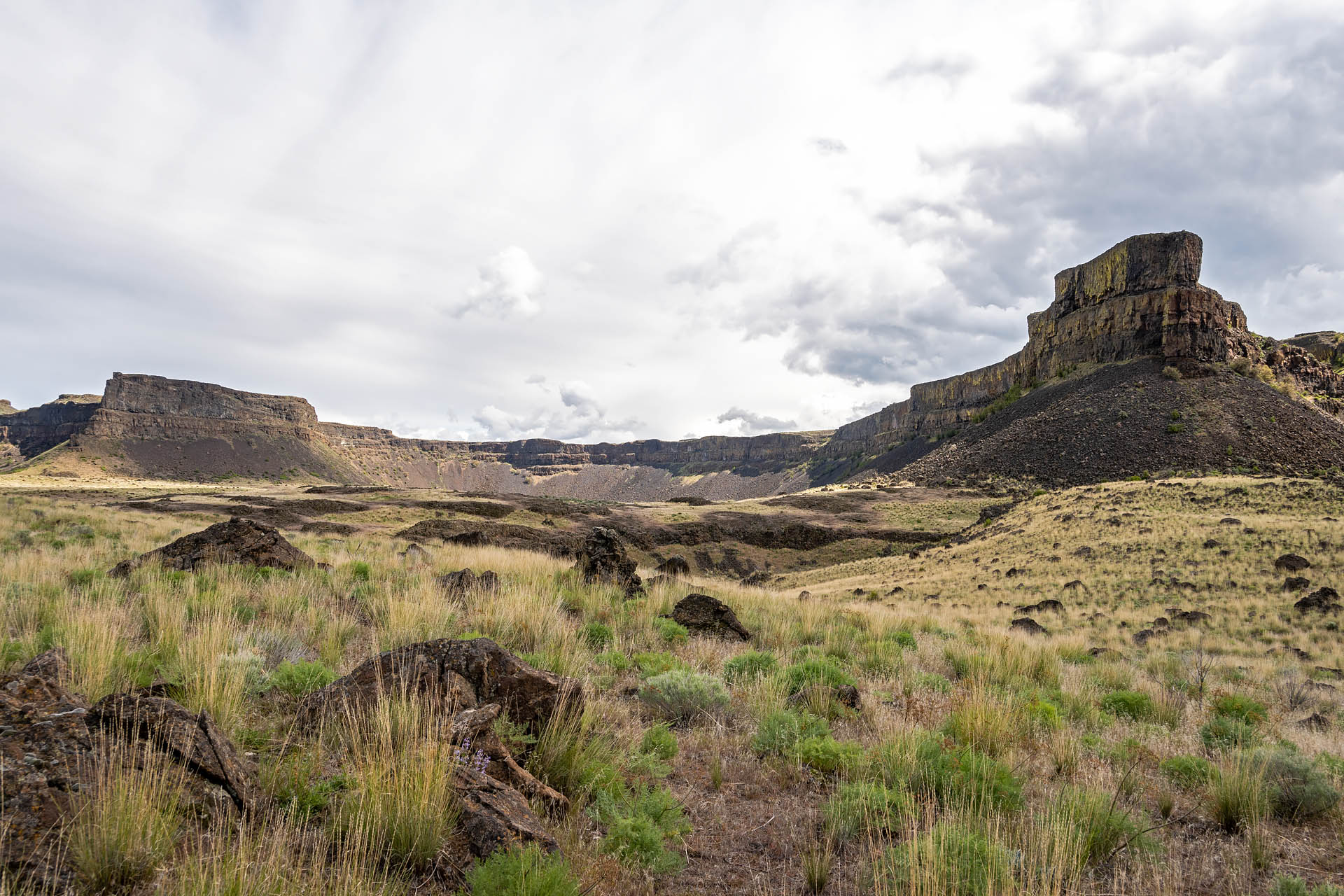 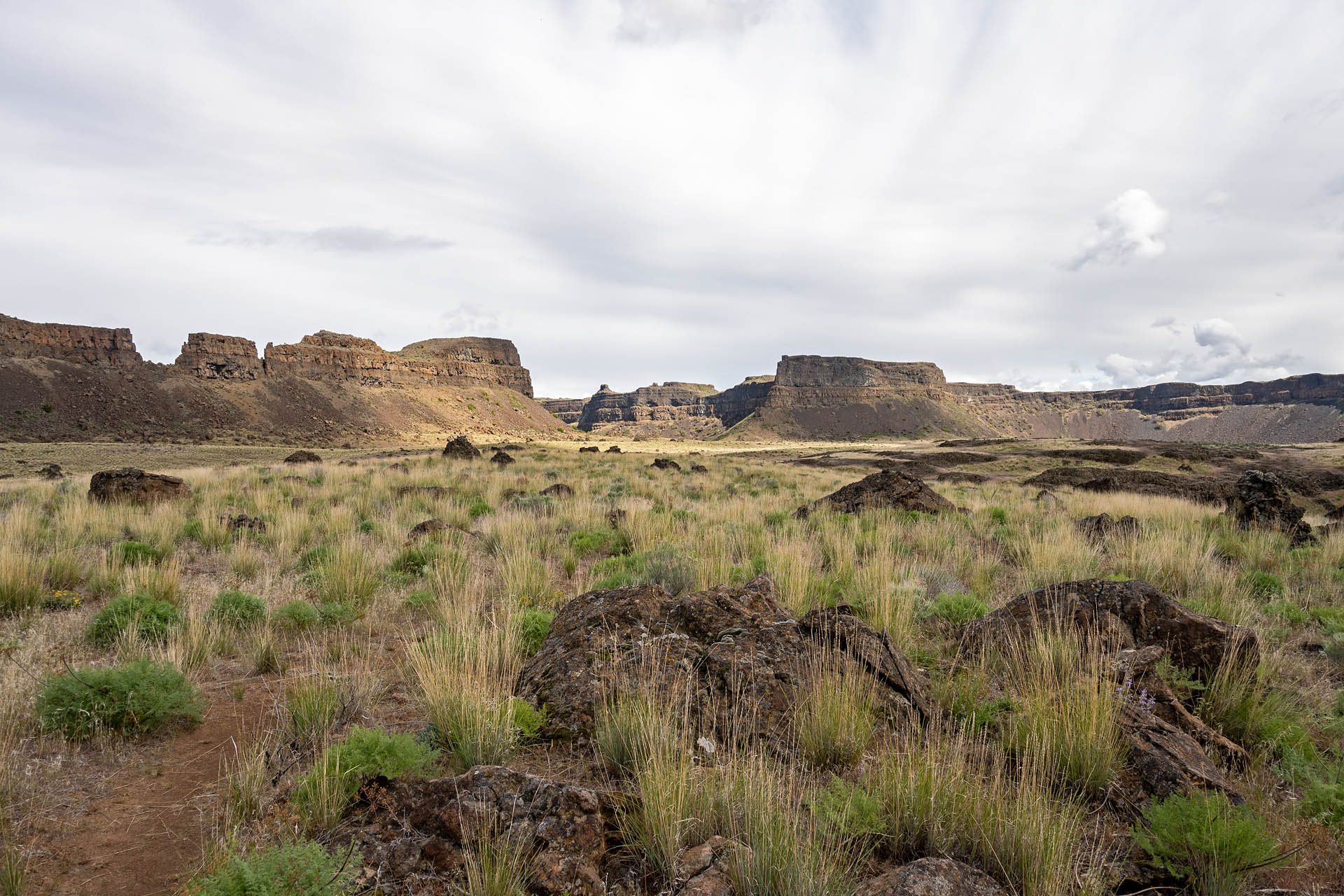 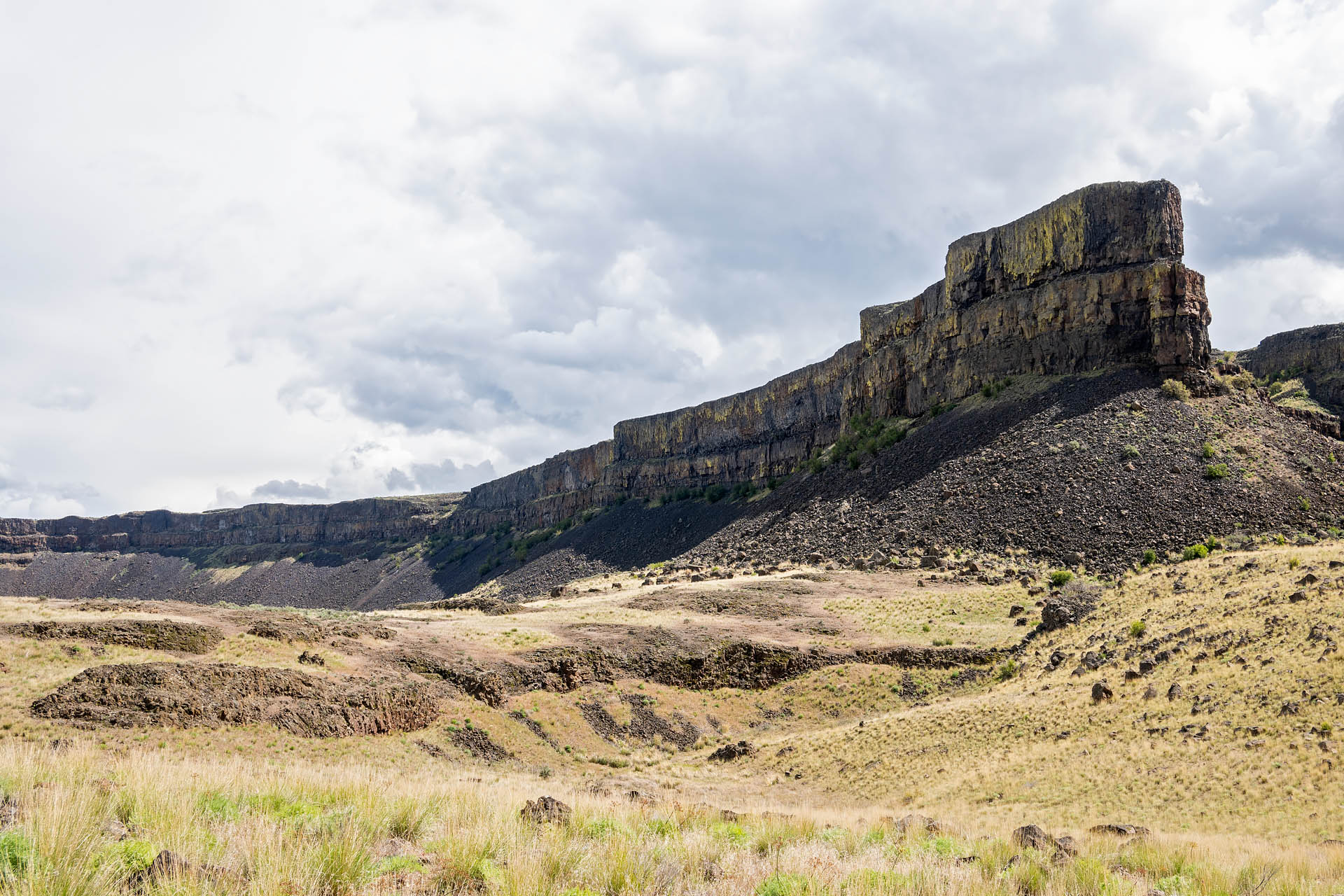 After about 0.6 miles, we headed east toward Delaney Springs via an overgrown path that seemingly sees very little foot traffic. We found a lone picnic table in an unexpectedly green corner of the park beside Spring Creek, and paused here for a quick lunch. Being the civilized street dog that she is, Sanchez of course had to dine on the table rather than at the table. 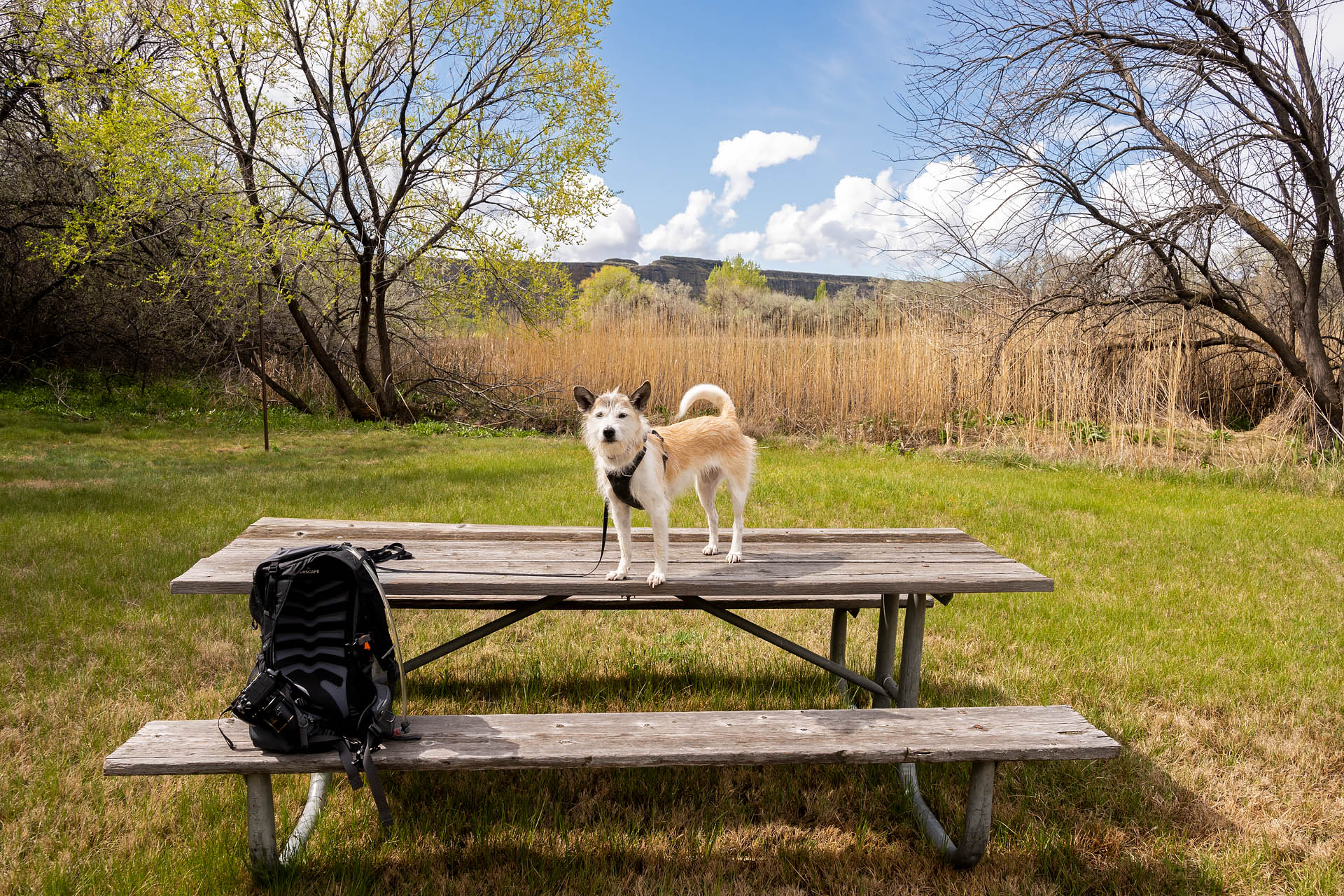 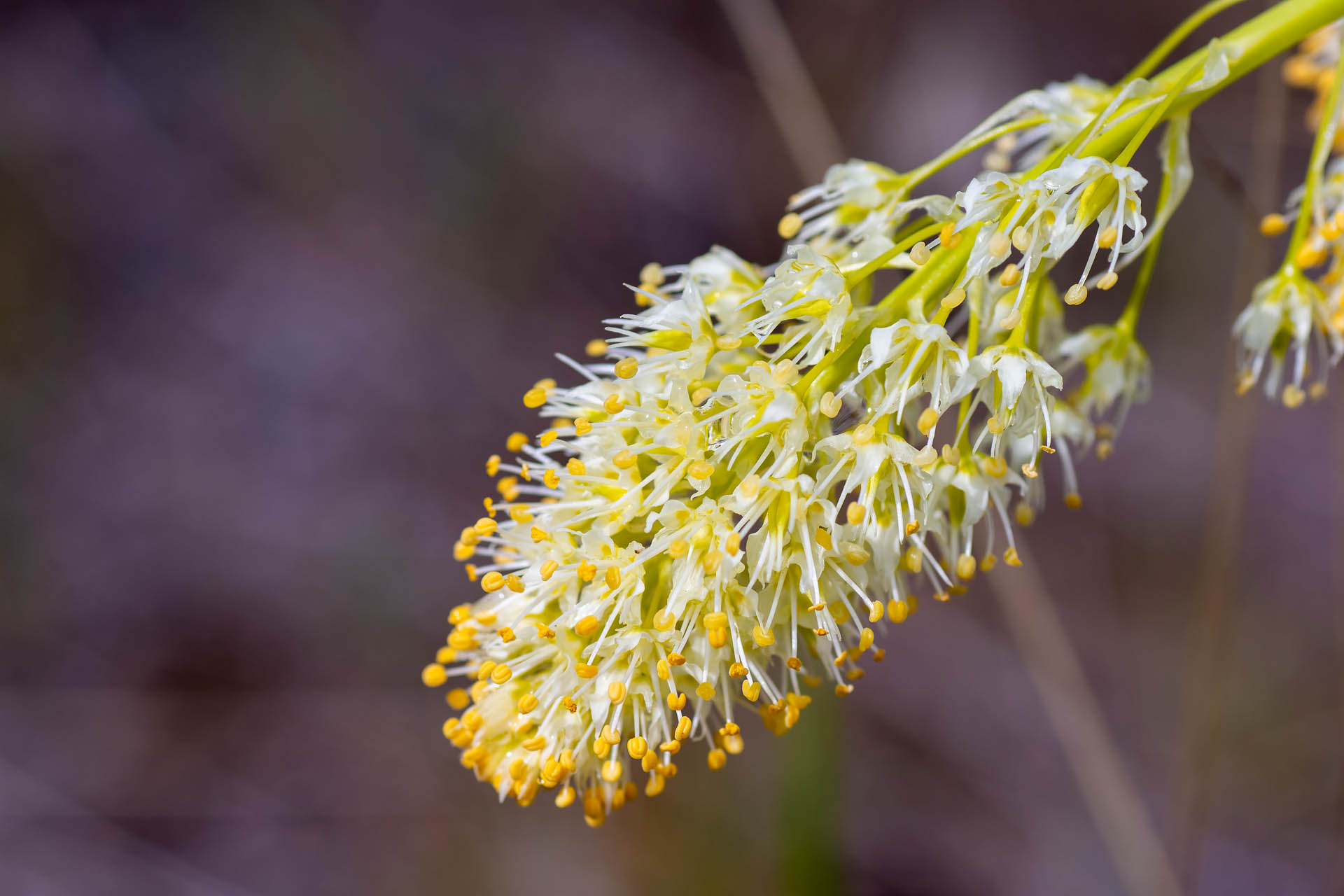 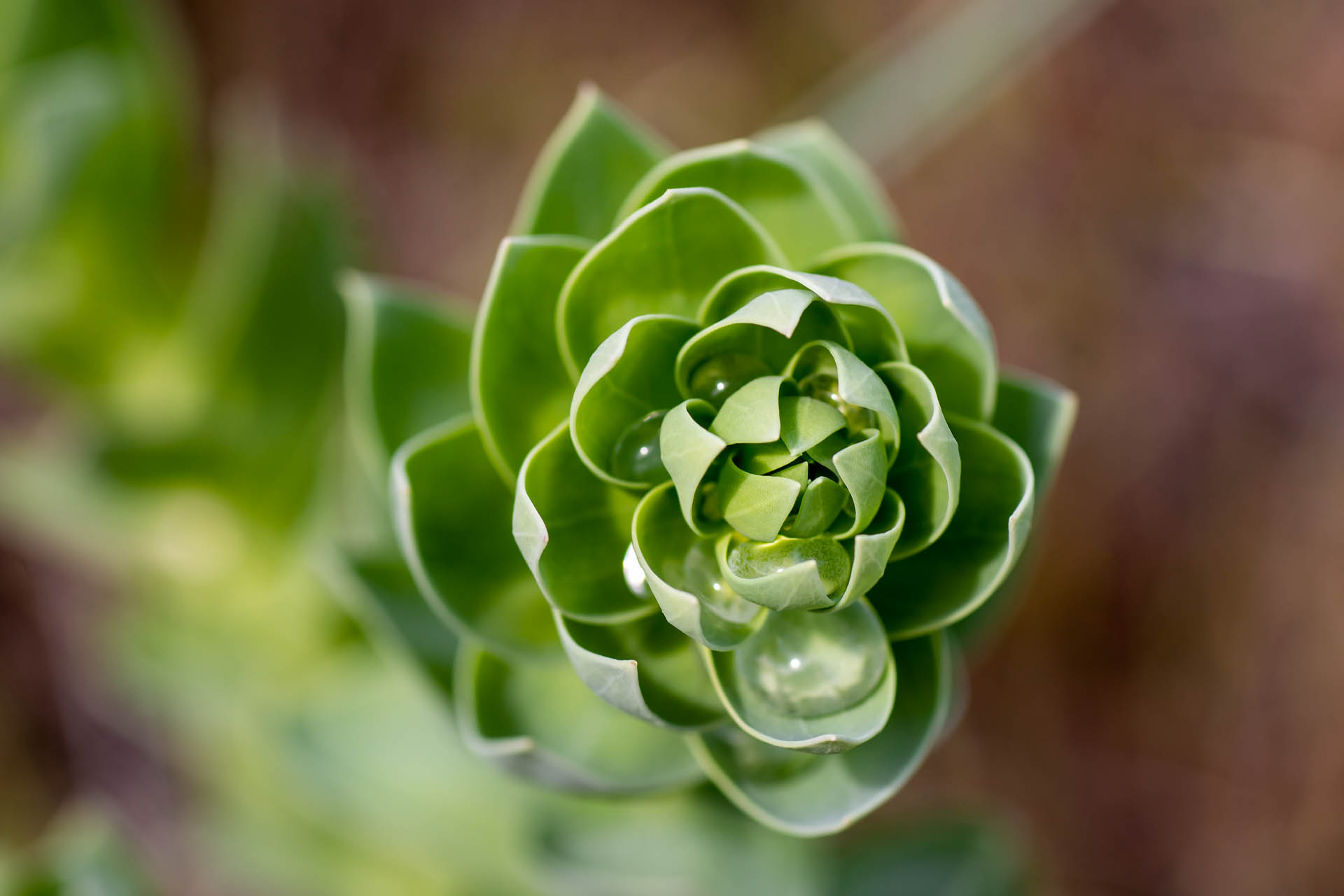 Continuing north and east on trails that faded in and out of the landscape, we eventually reached Green Lake. The lake looked more like a large mud puddle, but the wildflowers along the shores were beautiful. While they weren’t the large, showy blooms you see blanketing the more montane hillsides, there was a pretty remarkable density of smaller blossoms. Varied hues of cushion buckwheat lined nearly every section of trail leading to the lake, and eye-catching larkspur popped up from the moister soils along Green Lake and Spring Creek. 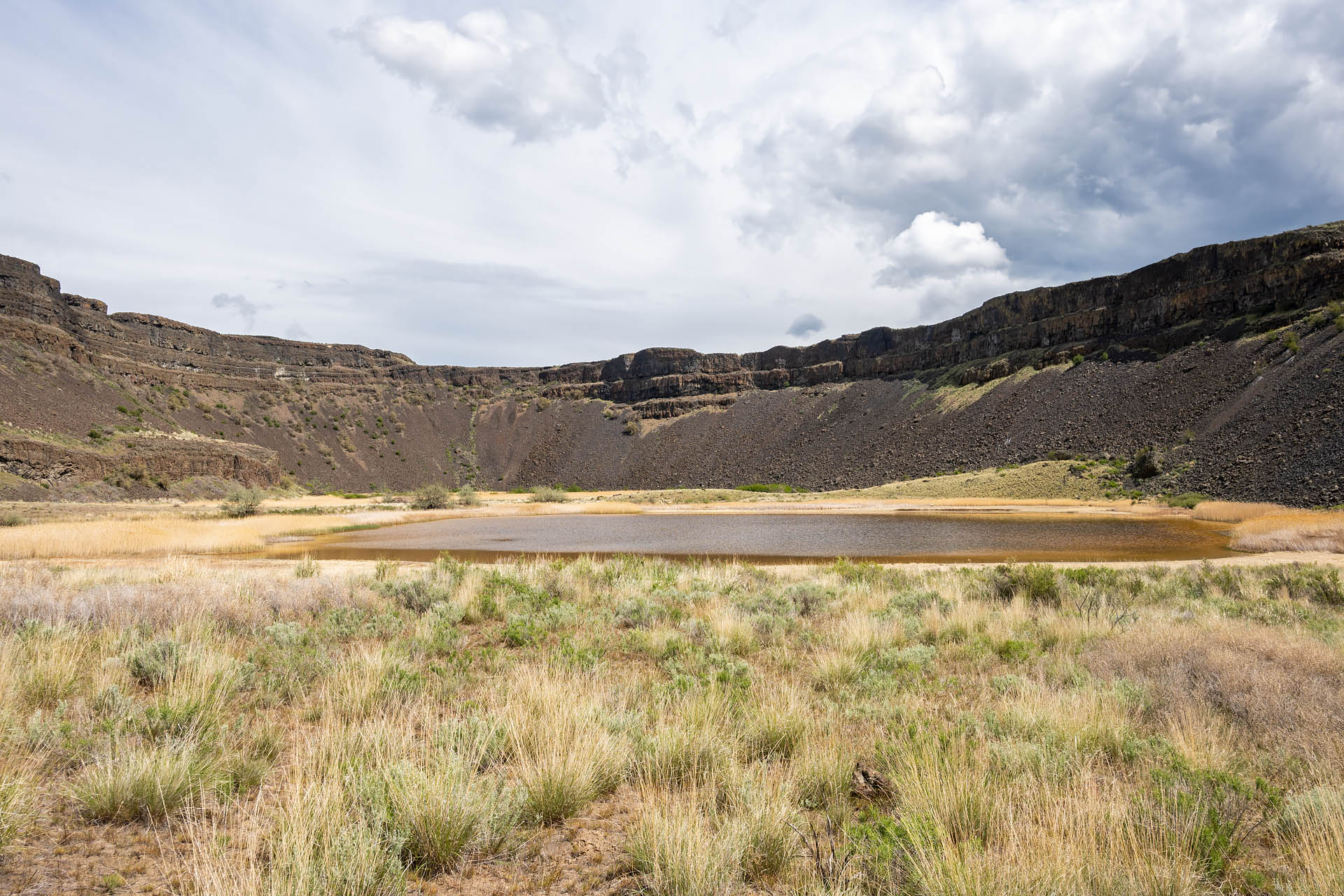 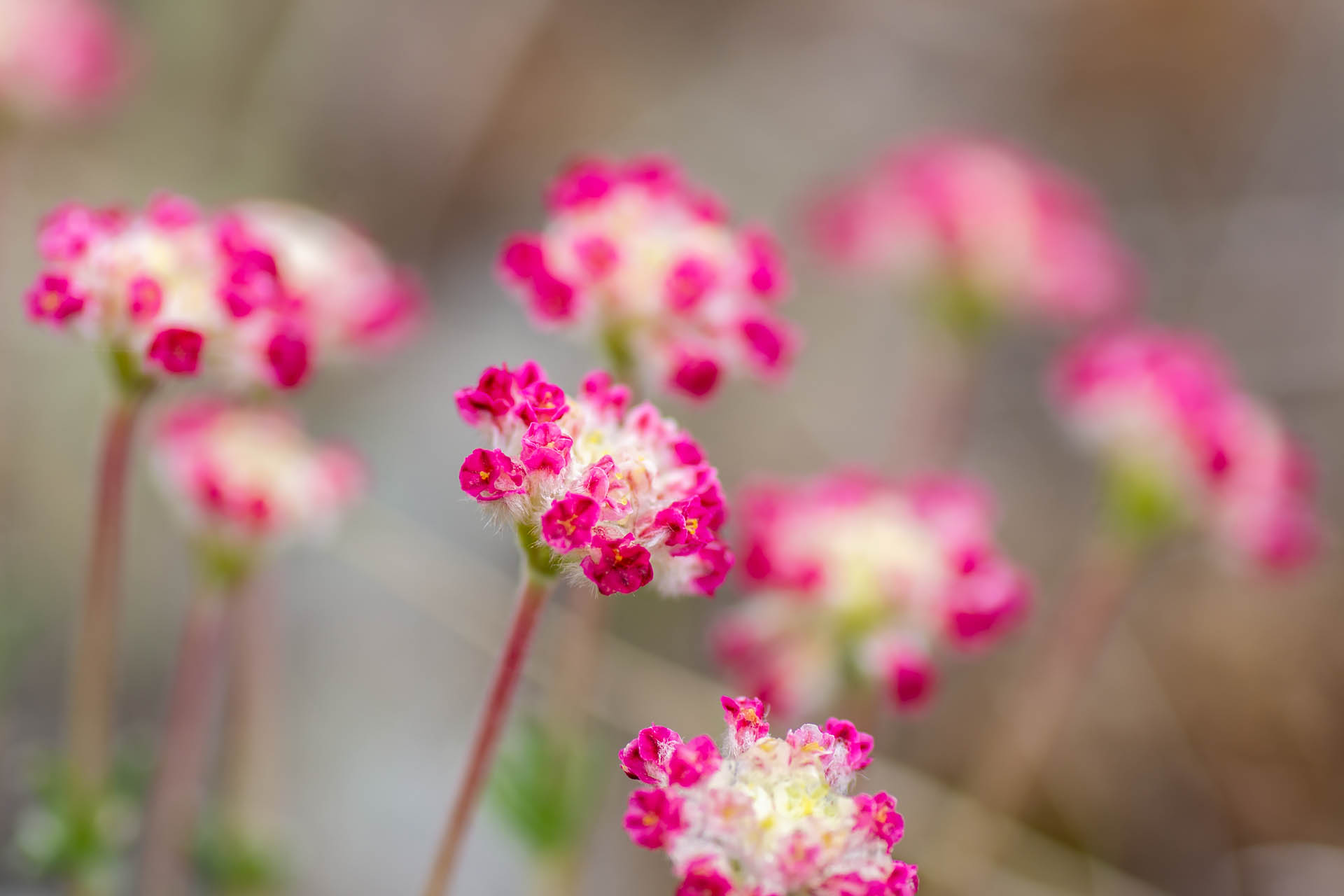 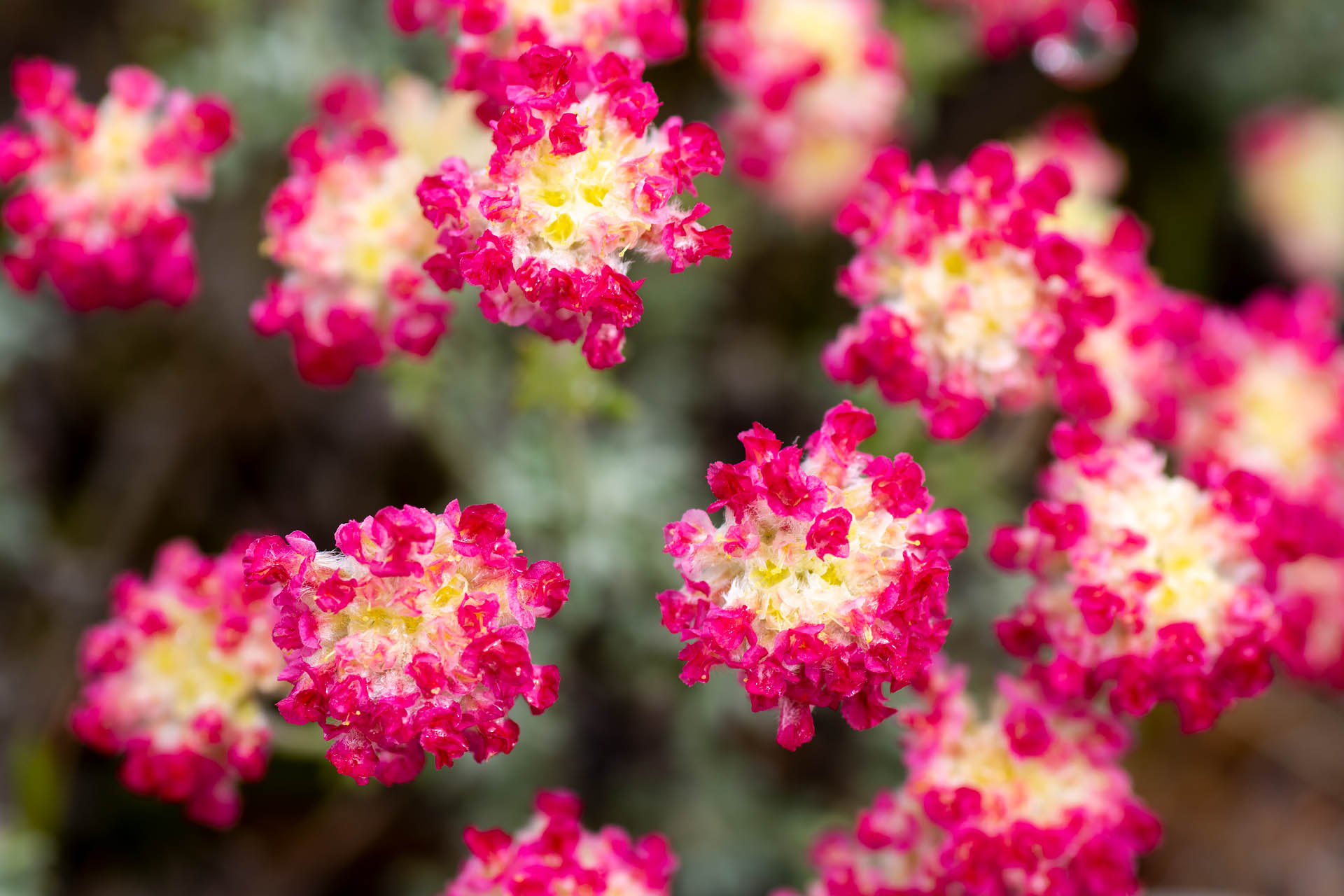 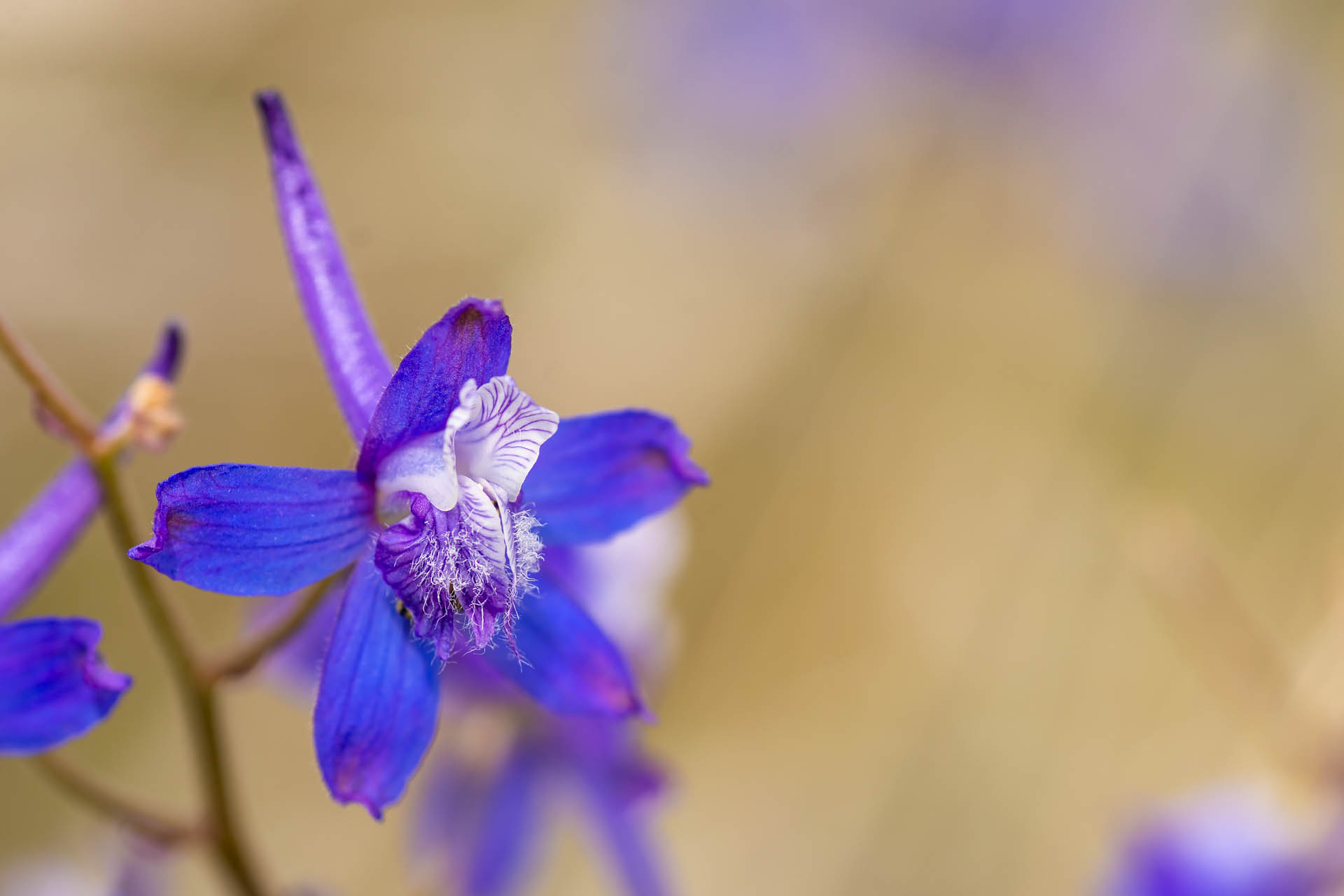 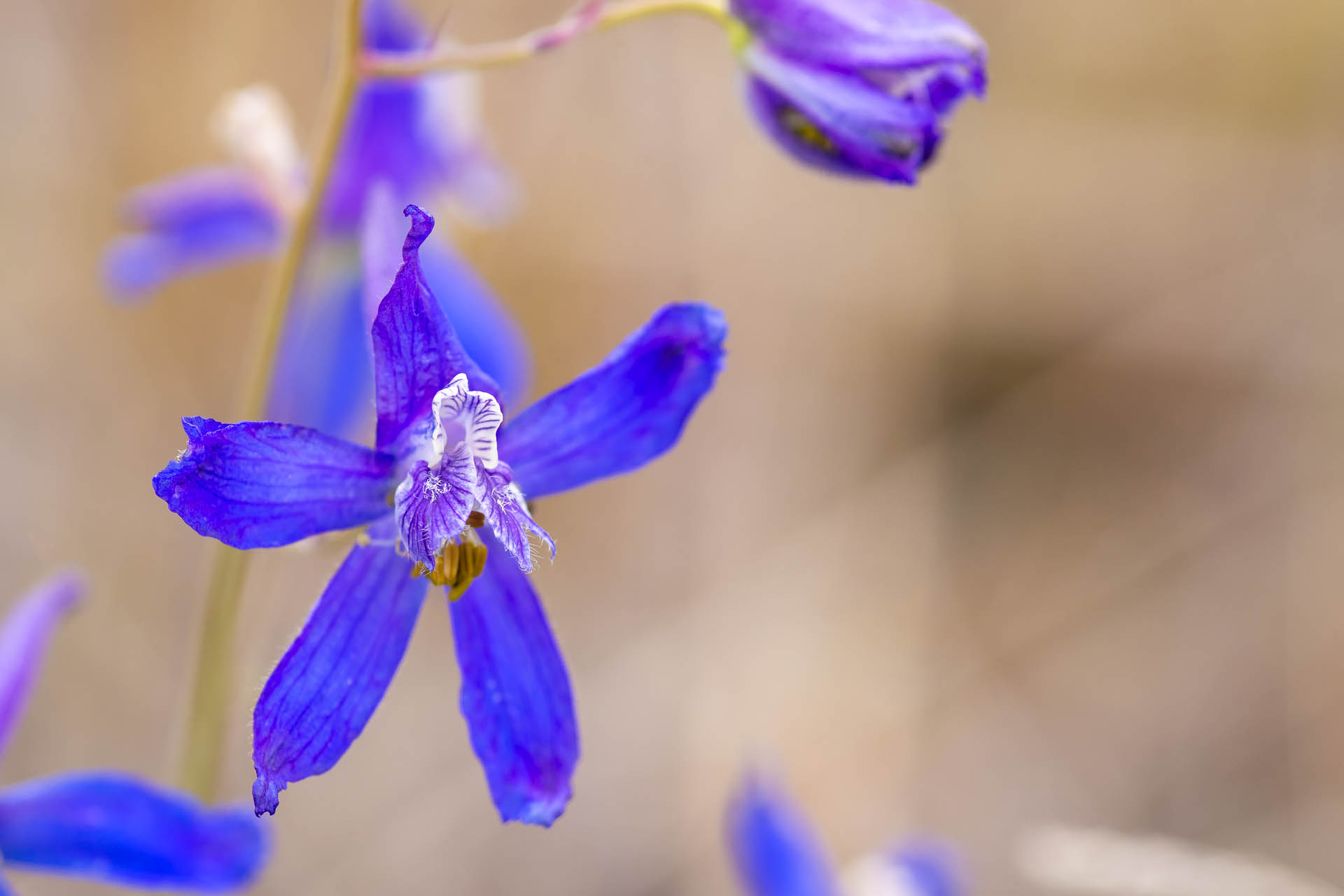 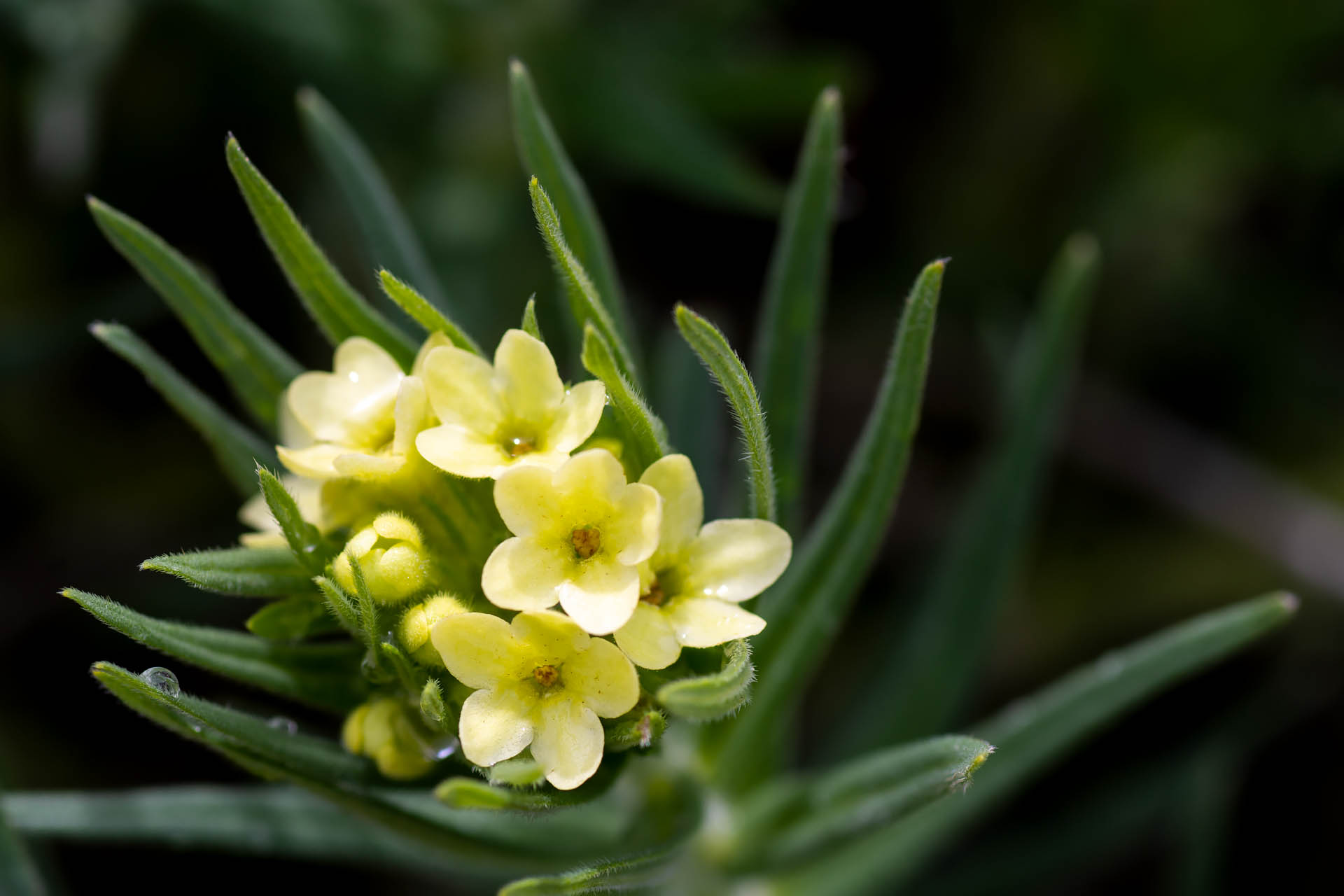 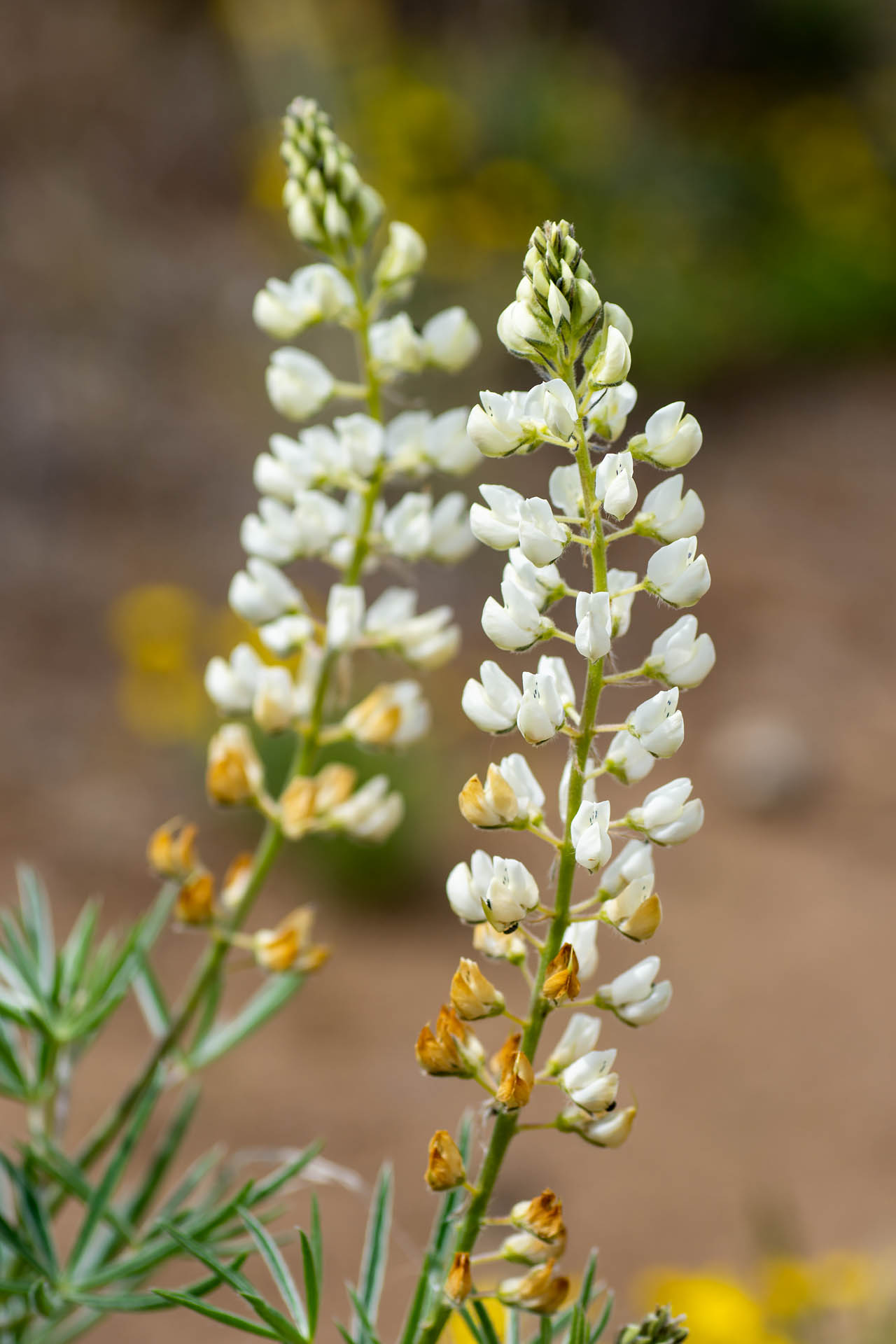 Passing along the northern tip of Umatilla Rock, we then reached the shores of Dry Falls Lake. As the trail wraps around the rock’s western side, it intersects with a small service road that provides boating and fishing access to the larger lakes. From here, we continued along a well-defined footpath just west of the road that traversed the western side of Perch Lake. This last portion of trail wound through thick swaths of sagebrush before ultimately returning to the trailhead at the southern point of Umatilla Rock. 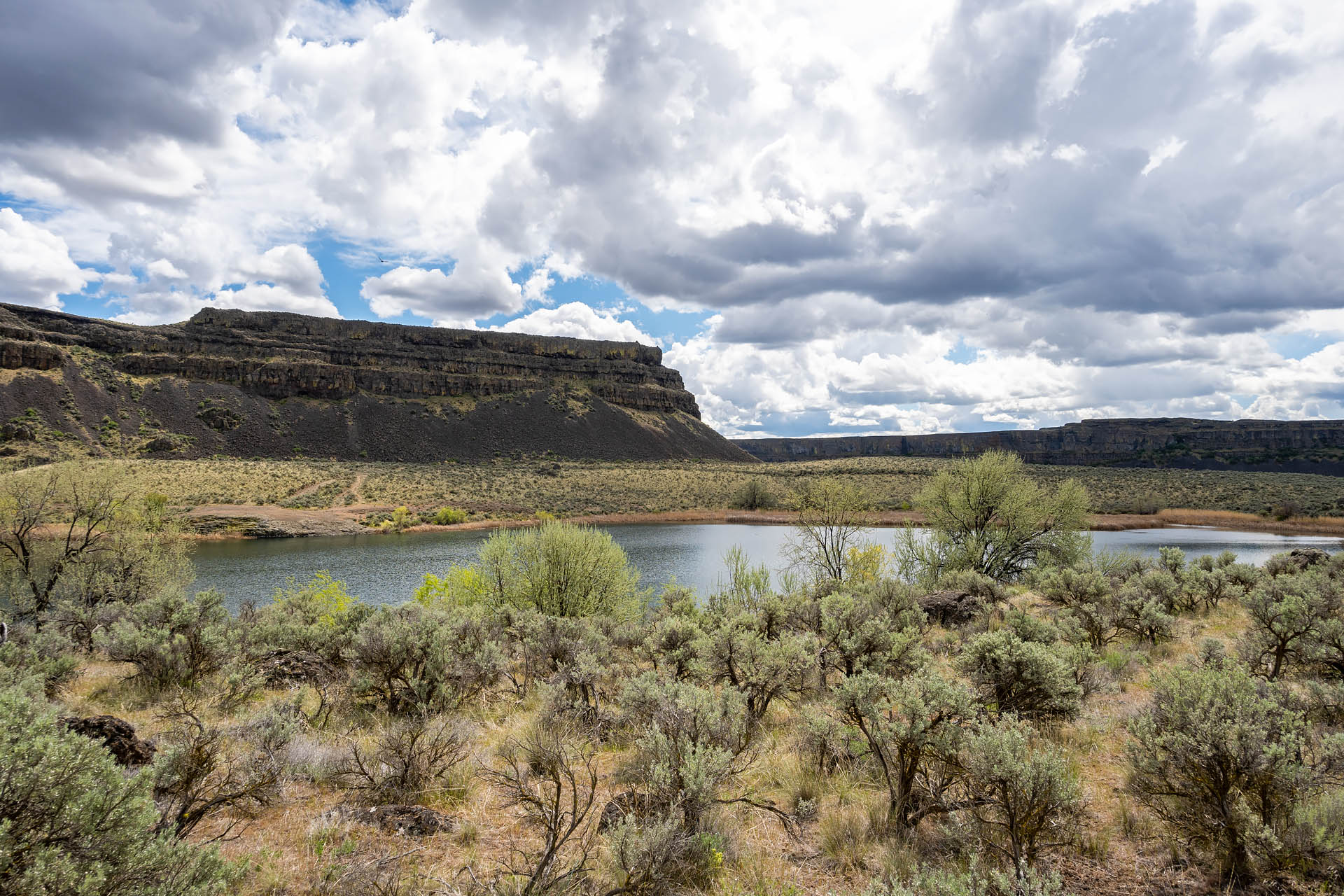 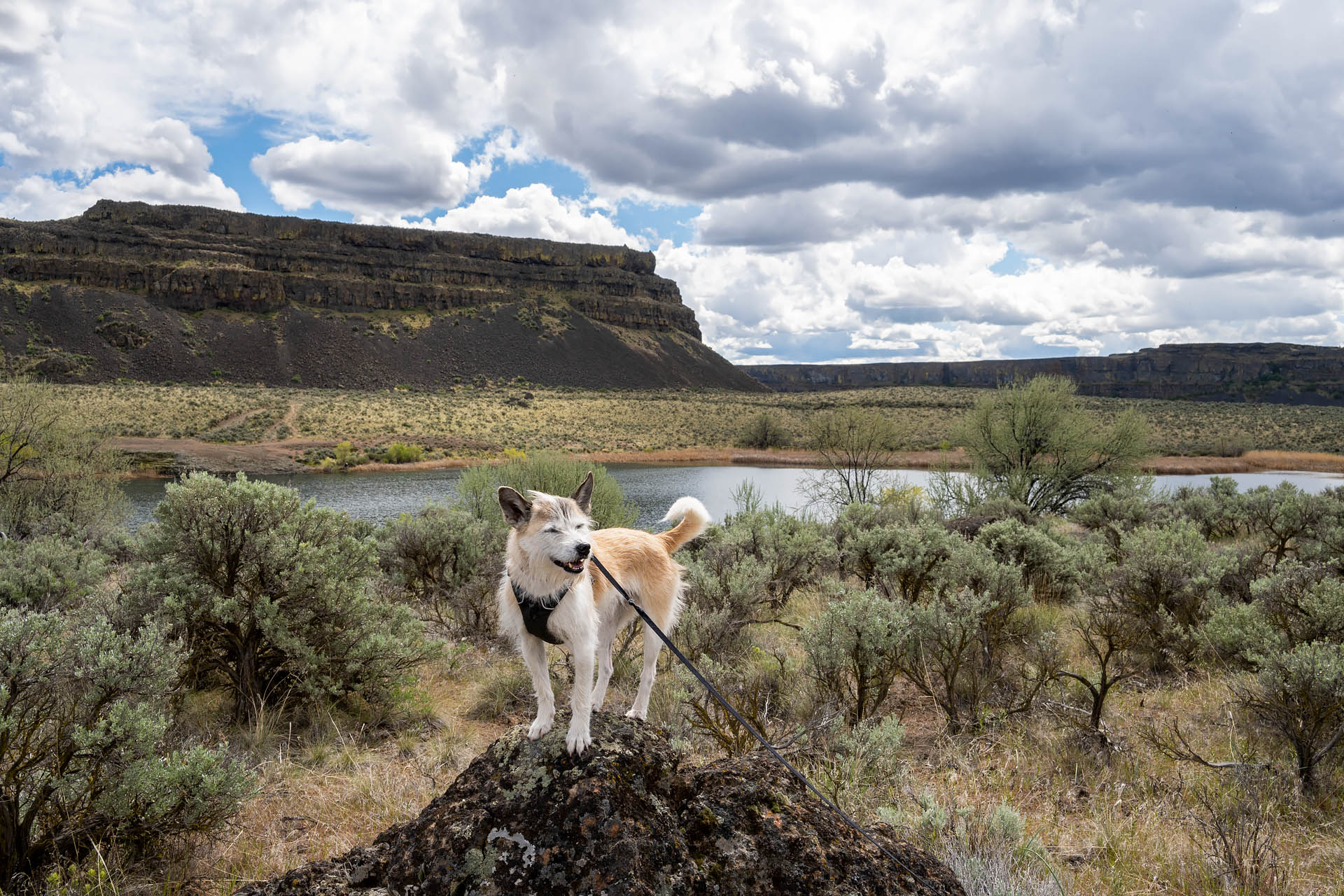 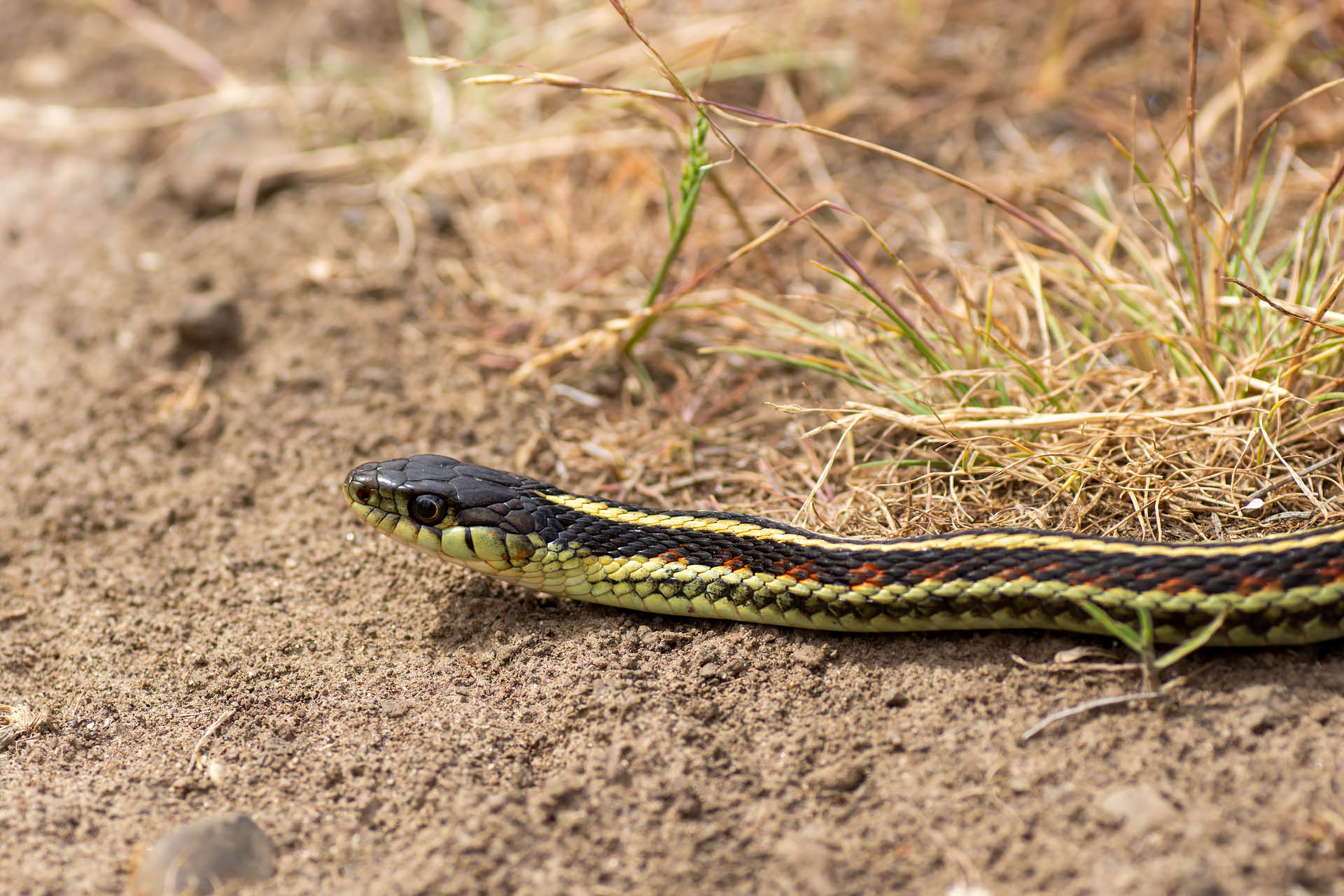 Overall, we thought Dry Falls was a nice place to spend a day. It’s certainly not the most scenic trail you’ll ever hike, but seeing such a unique piece of our geological history is pretty cool. Better still, you’re likely to enjoy some real solitude out here. We never saw another person, save for a handful of people fishing along the shores of Perch Lake. While the most commanding views are undoubtedly from up above the ancient falls, exploring the area beneath the cliffs gives an entirely different perspective on the true magnitude that was once an Ice Age wonder. 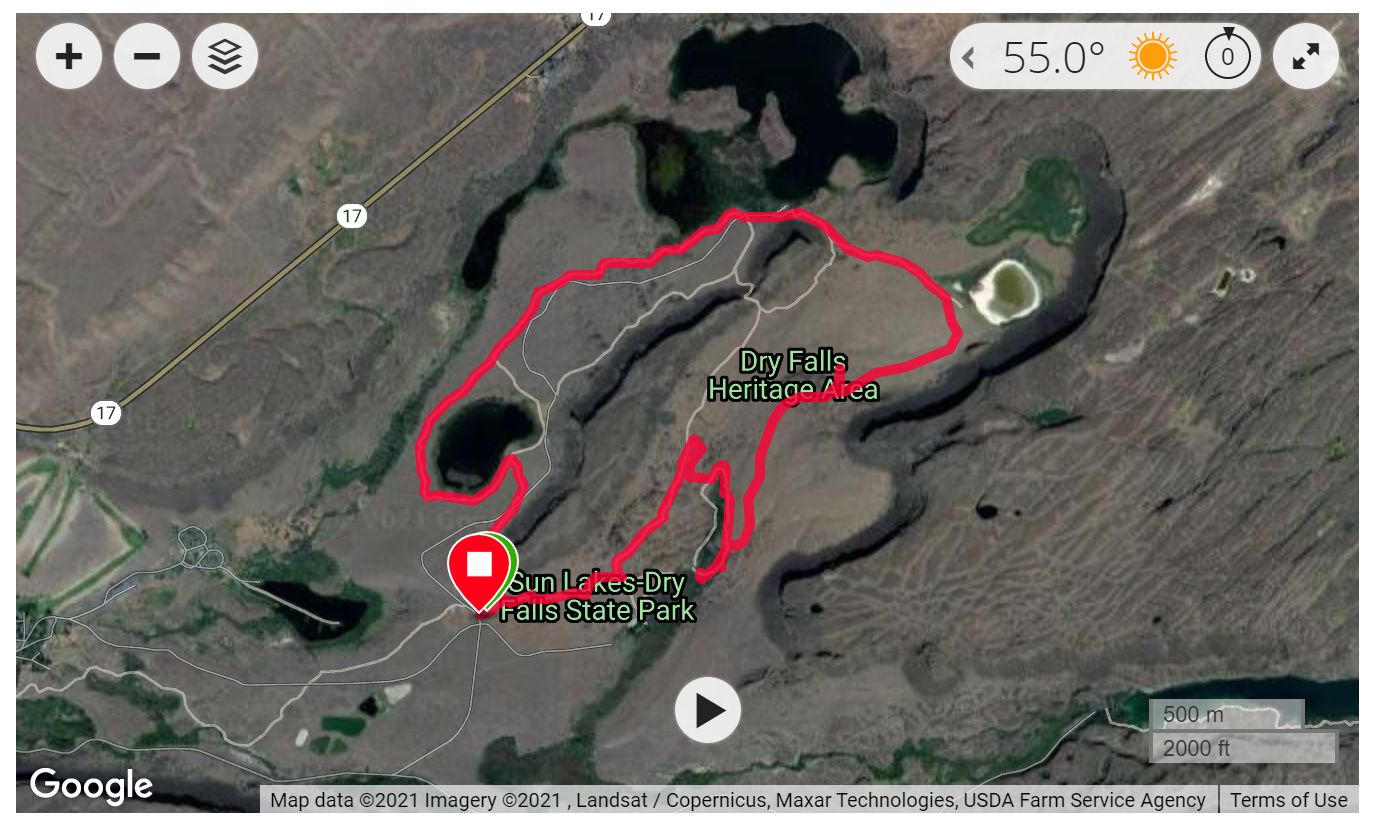