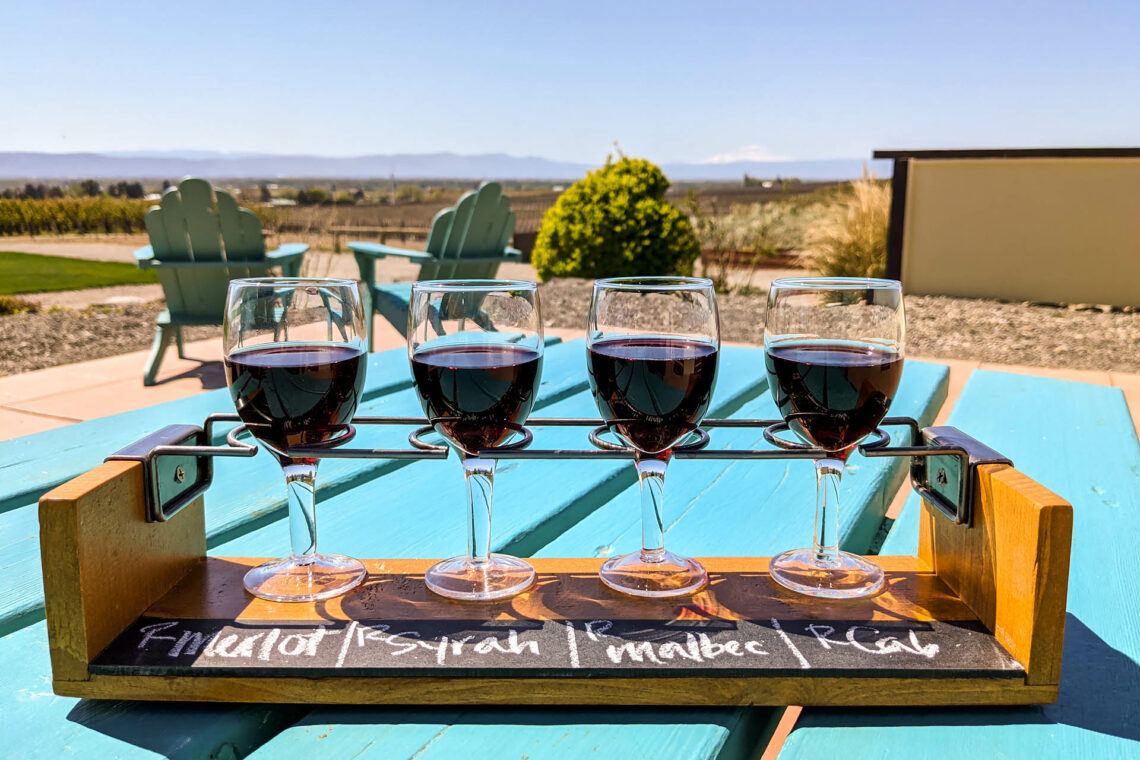 When you think of premier wines in the U.S., your mind probably goes straight to Napa or Sonoma Valley. Indeed, the two regions are home to some of the largest and most established producers in the country. By comparison, Washington’s wine country is still somewhat fledgling. However, it’s quickly building a reputation of its own. From its early beginnings in the 1970s, Washington has now cemented its spot as the country’s second-largest producer with more than 1,000 wineries.

With the exception of the small Puget Sound AVA, Washington’s wine country sits entirely in the eastern half of the state, within the rain shadow of the Cascades. With the mountains largely blocking the abundant precipitation seen on the coast, the climate here is ideal for viticulture – warm days, cool nights, and around 300 days of sunshine annually.

Washington’s wine region isn’t influenced solely by an idyllic climate. A series of Ice Age floods that ravaged the area between 13,000 and 18,000 years ago, surprisingly gave way to rich soil that is now ideal for viticulture. The Missoula Floods were the result of a ruptured ice dam that sent devastating floodwaters rushing from glacial Lake Missoula in western Montana across what is now eastern Washington. Floodwaters raced toward the Pacific along the Columbia River Gorge at speeds of up to 60 mph, giving rise to temporary lakes that were hundreds of feet deep. Washington’s present-day wine country was regularly overwhelmed by these cyclical floods; however, in their cataclysmic wake, the surges deposited silt- and clay-rich soils that are now perfect for agriculture.

With far too many areas to visit in a single day, we ended up choosing a couple of the smaller appellations that were a bit closer to our place in Leavenworth. We visited two wineries from Rattlesnake Hills (about 15 miles southeast of Yakima) and one from Naches Heights (a tiny AVA just northwest of Yakima’s town center). The former is home to ridgetop vineyards that sit at an elevation of around 3,000 feet, giving rise to cooler nights and good drainage. The latter is known for its silica-rich soil, a mineral that is valued by biodynamic farmers in the region. Additionally, all vineyards within Naches Heights are farmed either organically (without pesticides or synthetic fertilizers), biodynamically (a holistic approach to agriculture that’s also organic), or salmon-safe (by reducing run-off and pesticides that would negatively impact water quality). Some wineries, including the one we visited, fulfill all three criteria.

Before visiting, we contacted a handful of wineries to make sure we could do outdoor tastings with COVID still a lingering threat. We were pleased to find that most of the wineries were now offering tastings outside along with those in their indoor tasting rooms. With three compliant picks plugged into Google Maps, we were off for a day in wine country.

Our first stop was at Cultura Wine, a small, family-owned winery in the heart of the Rattlesnake Hills AVA. Run exclusively by husband-and-wife team Tad and Sarah, the pair focuses solely on making quality reds. Both grew up in orchard farming families in the Yakima Valley, and the two eventually became interested in winemaking. The pair released their first vintage in 2005 and, while they’ve grown in production over the fifteen years, they still do all the work themselves. From planting and harvesting, to making the wine, to bottling and labeling, Tad and Sarah do it all and currently produce around 1,000 cases per year.

We visited their small patio space on a warm Saturday afternoon, and were greeted warmly by Tad. He offered us a flight of five wines, as well as a pour of a second vintage of one of their ‘Library Selection’ blends. We sampled their Sun Ridge Merlot, Fewel Family Estate Zinfandel, and four blends. While we really enjoyed their Zin, our top pick was ultimately the 2014 Chronos – a Bordeaux-style blend of 50% cabernet sauvignon, 35% cabernet franc and 15% merlot. It ended up being the one bottle we purchased over the course of our three tastings. 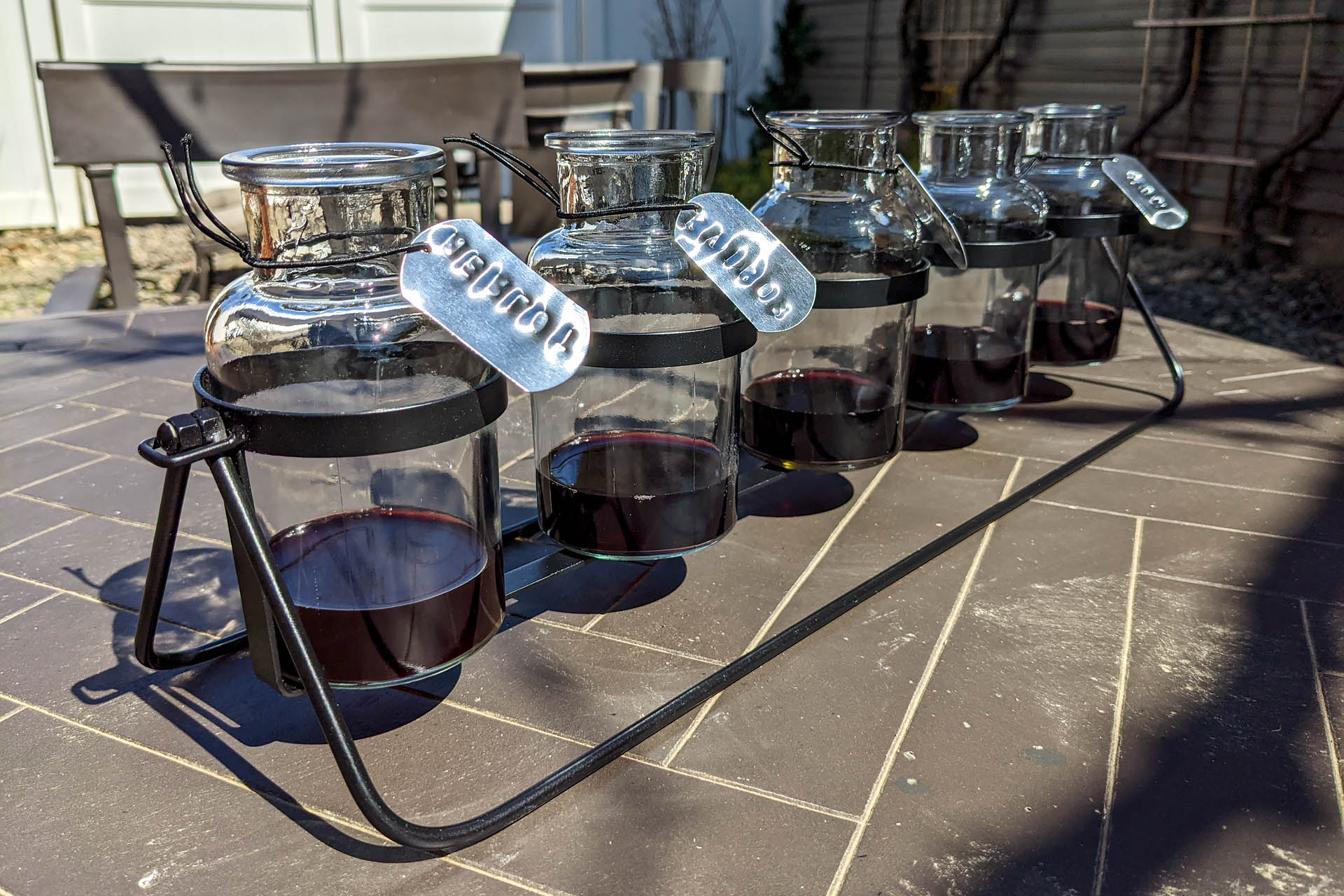 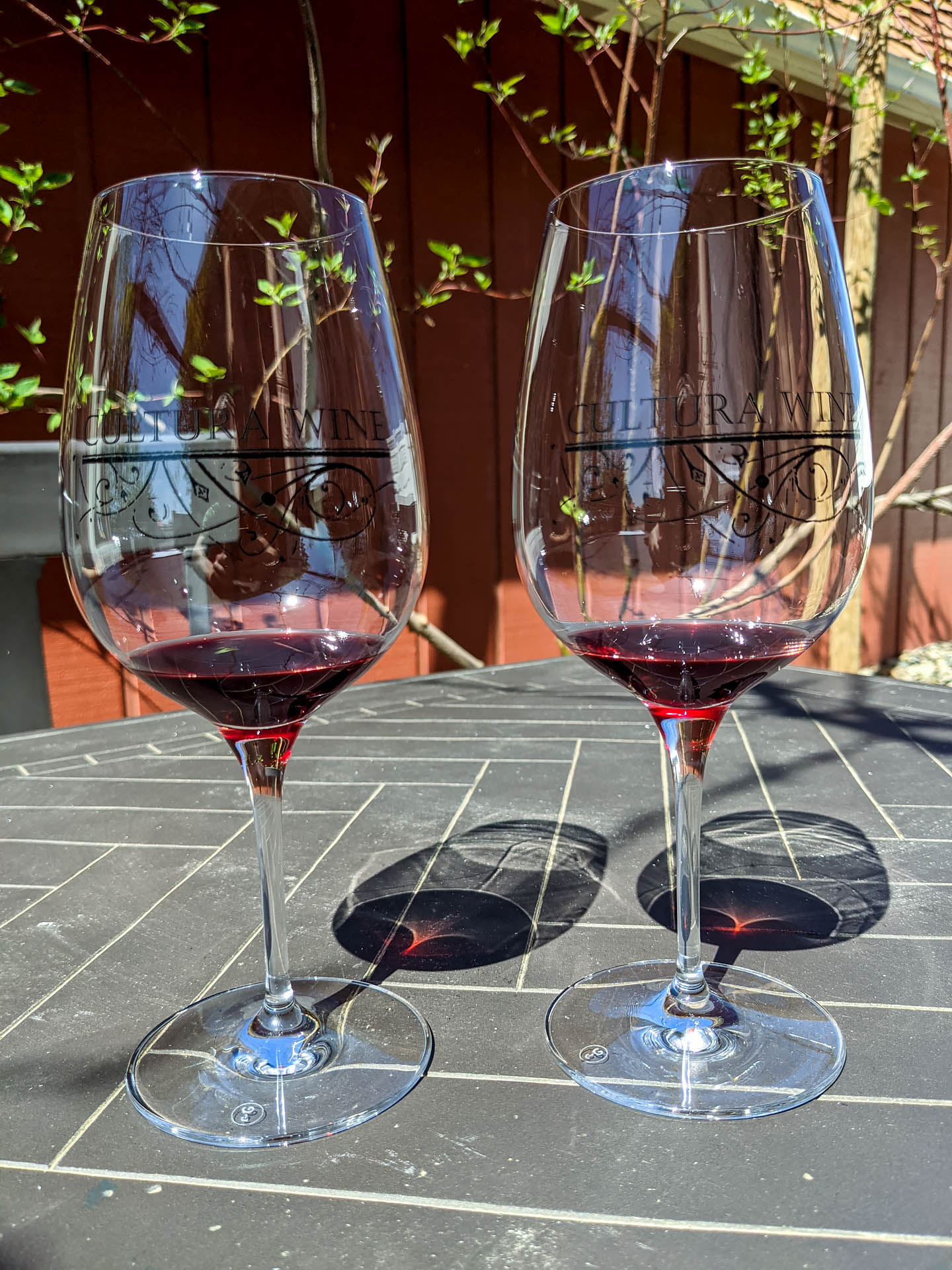 While we were there, we enjoyed shooting the breeze with Tad. He seems like the kind of person who’s never met a stranger, and was quick to offer up suggestions for some of his favorite local spots. One of those was Los Hernandez, a humble tamale shop in nearby Union Gap. To our surprise, the tiny restaurant was recognized by the James Beard Foundation in 2018 as one of ‘America’s Classics.’ At the height of asparagus season (April to June), they serve up tamales made with the freshly-harvested stalks and pepper jack cheese. If we’ve learned anything over our years of traveling, it’s to always listen to the locals. Stephan is still raving about his tamale, and I think we’re going to be planning a return trip before we head over to the coast in May. 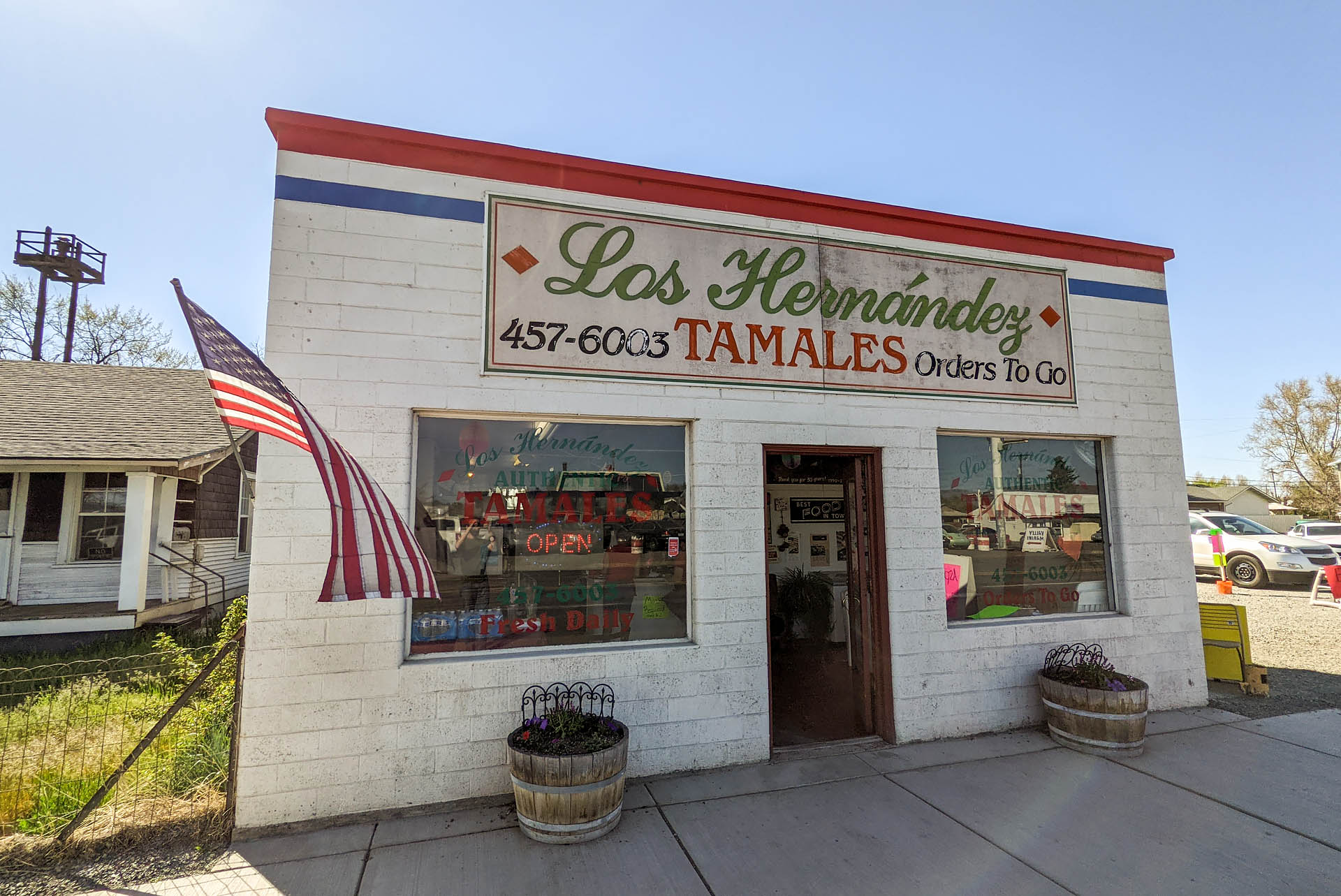 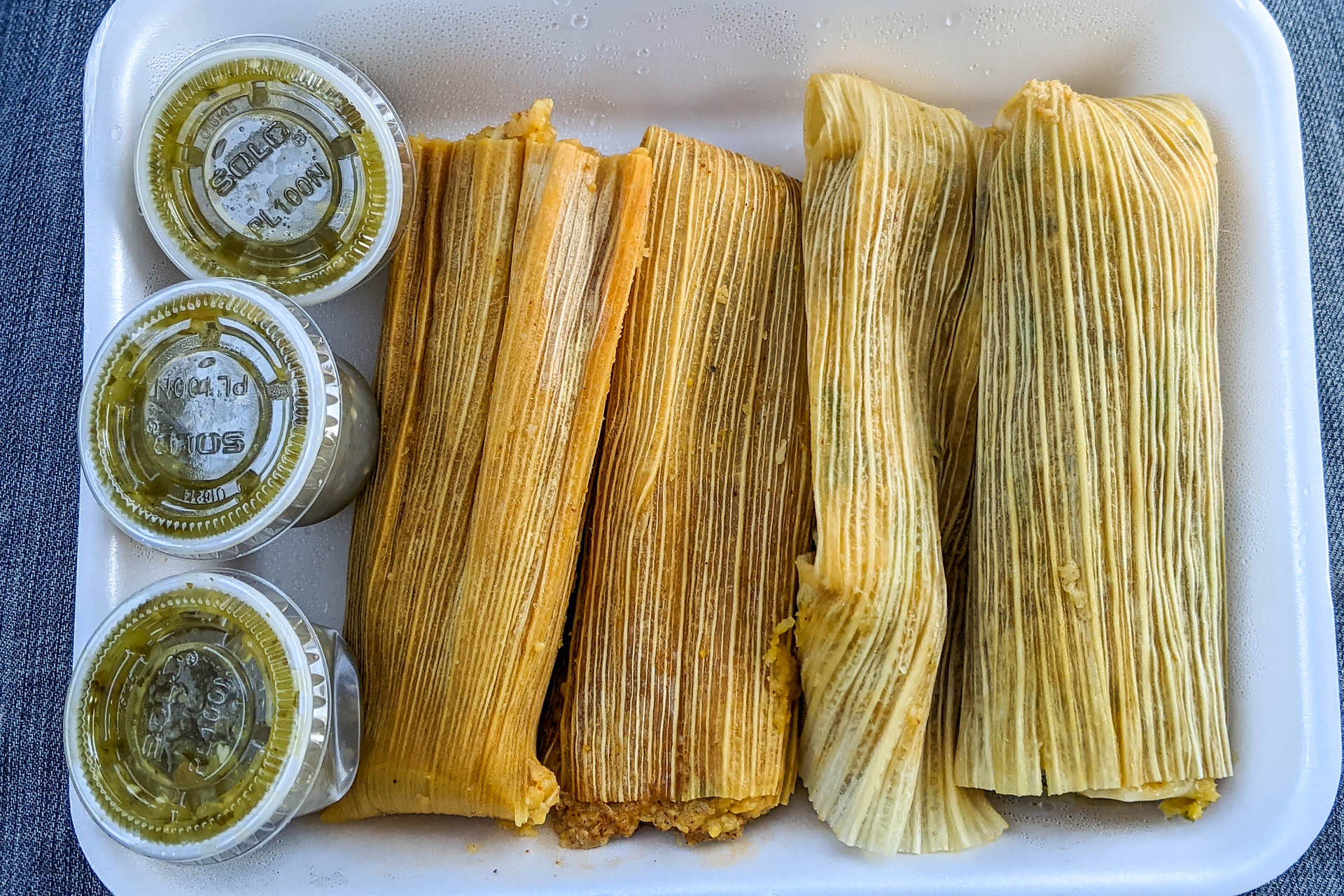 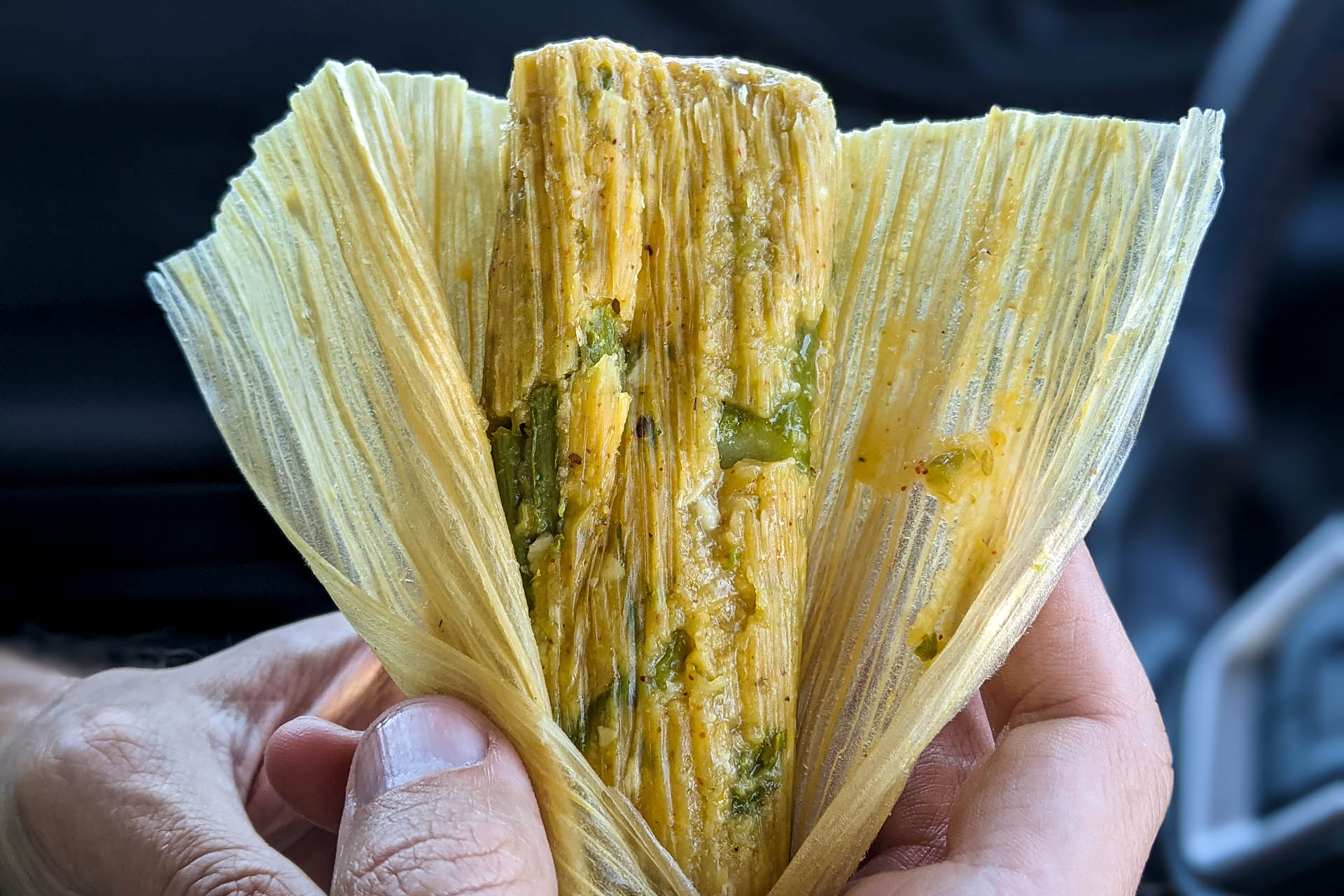 Set on a hillside with views out to Mt. Adams and Mt. Rainier, VanArnam is a picturesque winery just up the road from Cultura Wines. The business is family-owned, and produces a number of both red and white varietals. The winery has a spacious stone patio overlooking the vineyard, and guests are invited to bring their own picnic to enjoy while sampling the wines. As someone who habitually struggles to eat out due to dietary restrictions, I thought that was a nice touch.

While the grounds themselves were beautiful, none of the wines really stood out to us. We ordered the flight of reds that included a merlot, syrah, malbec and cabernet sauvignon. Overall, they were a little too fruit-forward for our tastes. If we had to pick a favorite, it would have been the cab. That said, they had a number of premium reserve wines on the menu, and we thought it would be nice if they offered a flight of the higher-end vintages (priced accordingly, of course). 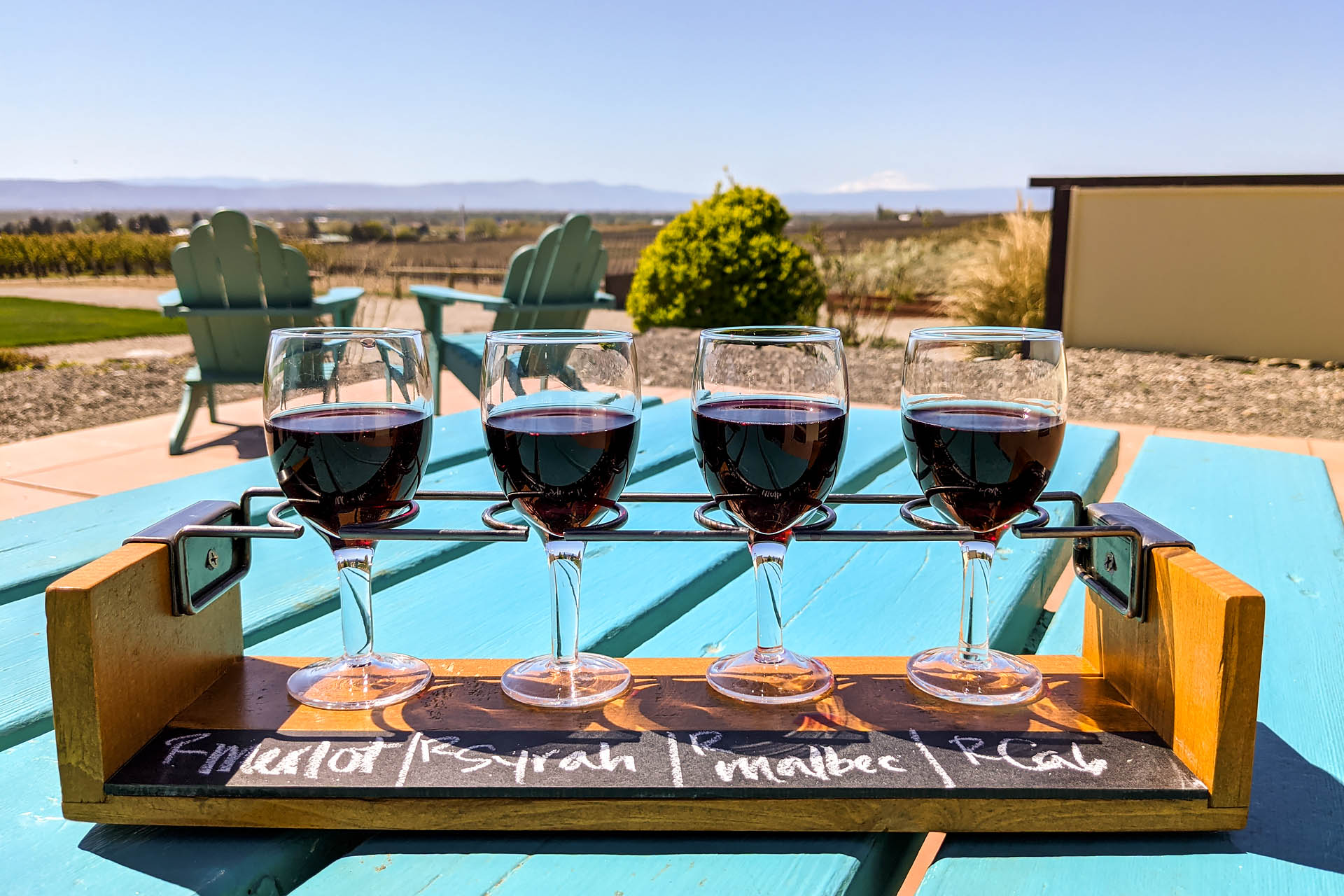 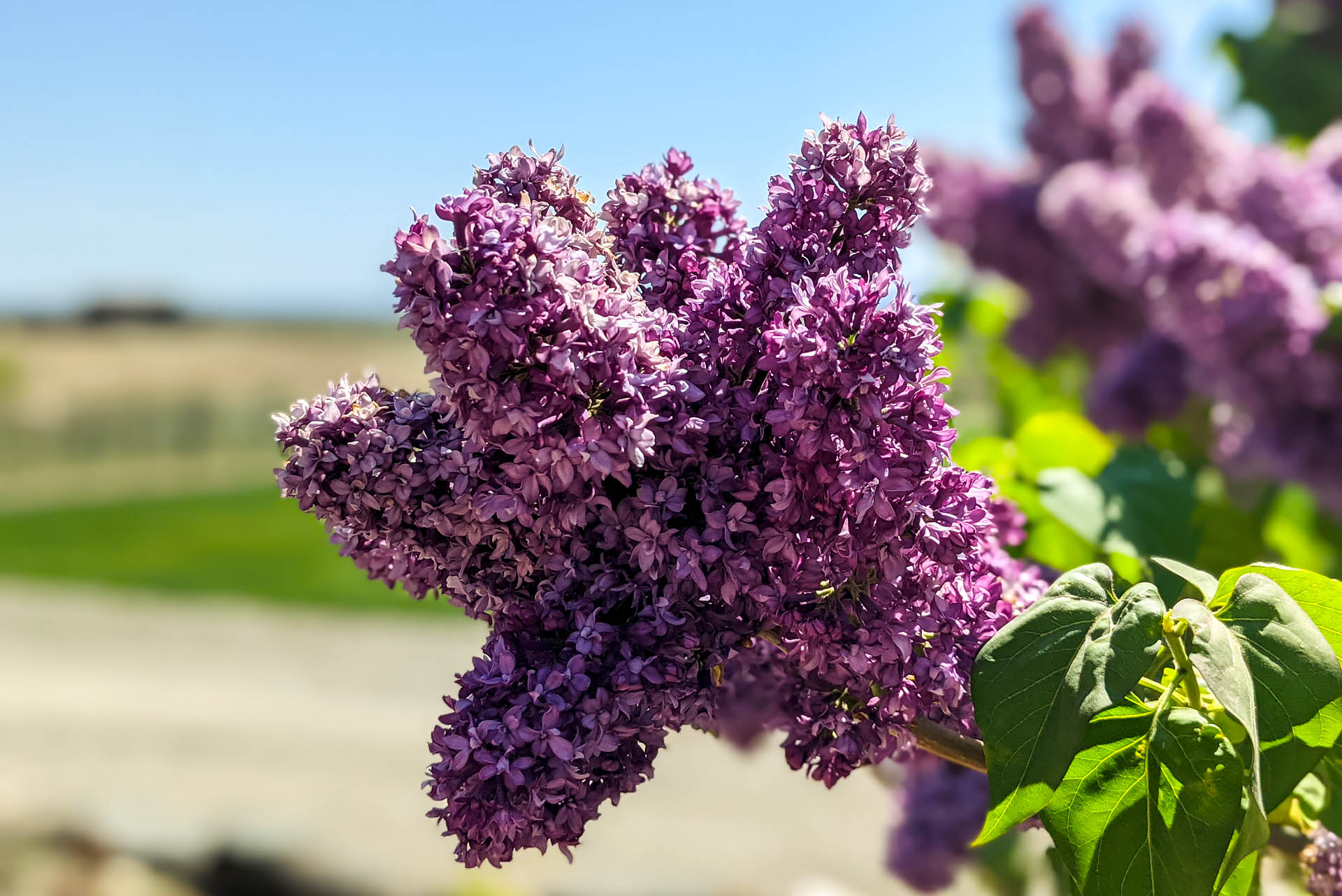 Wilridge Vineyard is one of just a few producers in the tiny Naches Heights AVA. As with other wineries in Naches Heights, Wilridge is a biodynamic wine producer. While I am totally naïve to all the nuances of biodynamic farming, oversimplified, it’s a more homeopathic approach to agriculture that’s been around for about a century. Growers consider things like lunar phases and astrological configurations in all of their processes, and treat the entire vineyard as one cohesive ecosystem. Biodynamic growing is similar to organic farming in that it eliminates chemical additives in both cultivation and winemaking (e.g. pesticides, herbicides, synthetic fertilizers, sulfites). Additionally, it emphasizes practices like composting and crop rotation, with the overall goals of sustainability and creating a natural end product that is good for both the consumer and the land.

Highlighting the vintner’s commitment to sustainability, Wilridge was named ‘greenest winery’ in Washington, and was the first vineyard to be certified entirely organic, biodynamic, and salmon-safe. If you’re interested in visiting the eco-conscious vineyard, their property is absolutely gorgeous. Of the three wineries we visited, it was by far our favorite outdoor space. Perched on a hill overlooking the valley, the spacious lawn is peppered with picnic and café tables. They even have a small network of walking trails around the hillside, and it’s also dog-friendly. It’s quiet and super casual, and was perfect for comfortable social distancing. 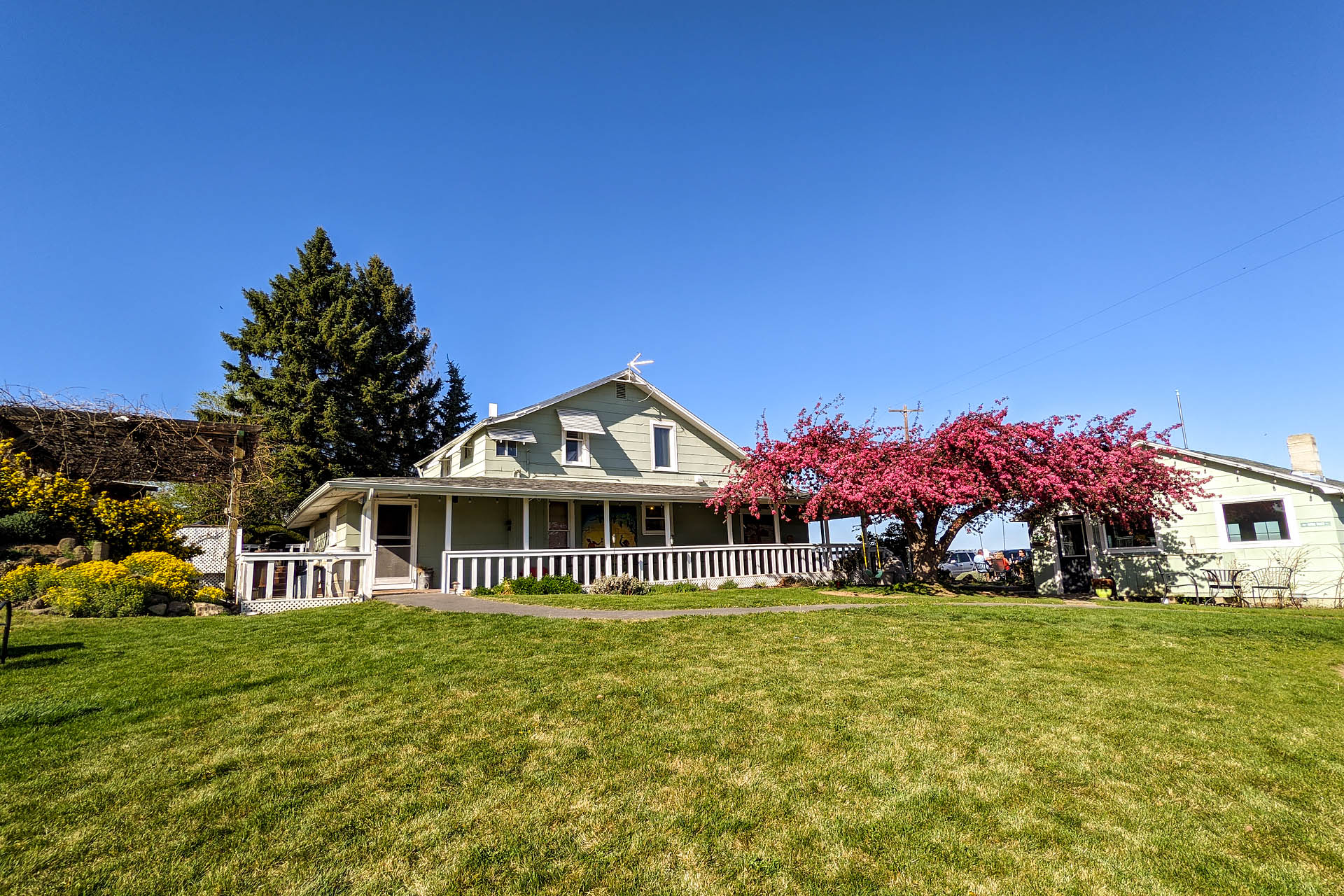 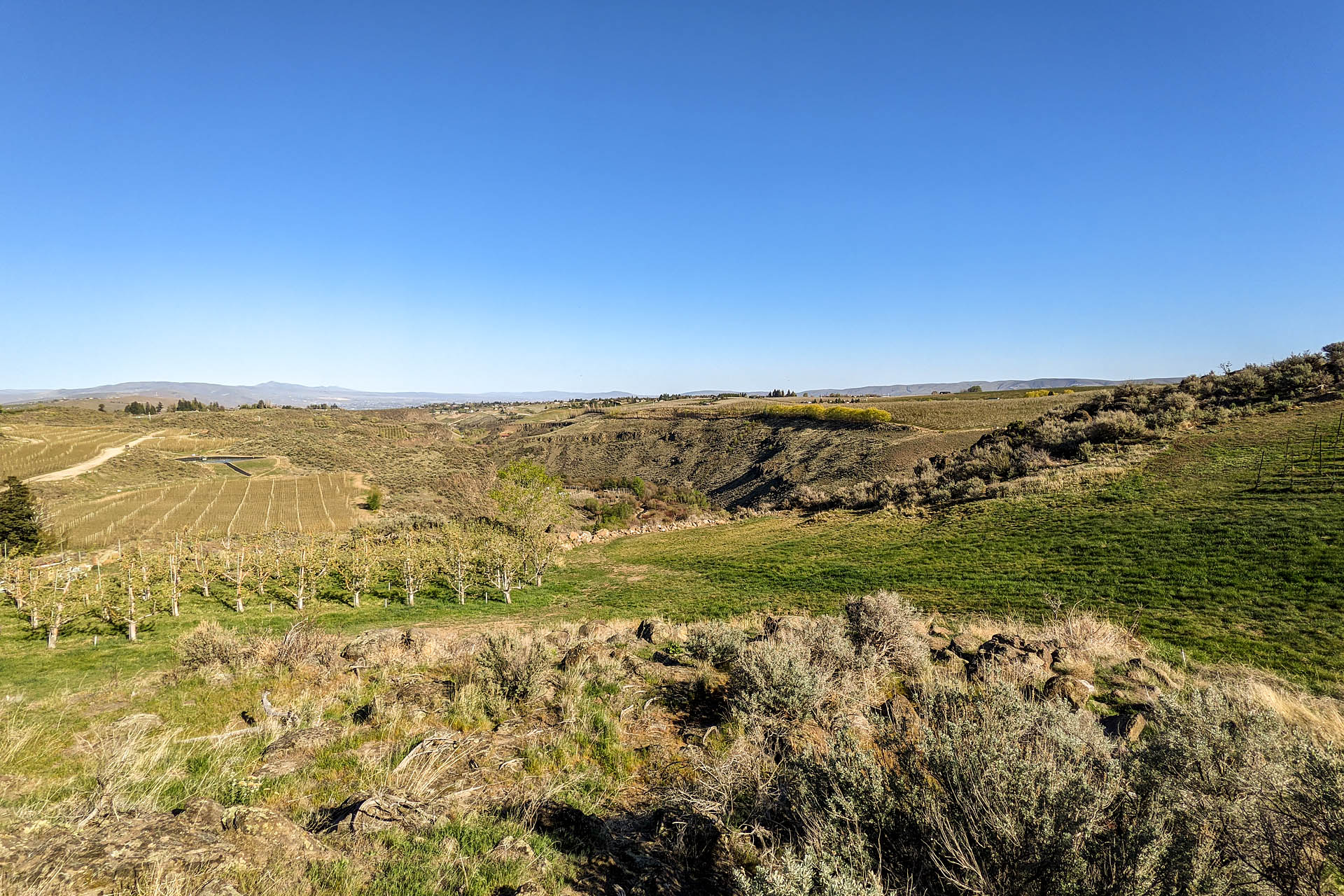 During our visit to Wilridge, we sampled their Spring Barrel Flight. The tasting menu included two different reds, with a barrel and a bottle sample of each. We were intrigued. Not only had we never done a barrel tasting before, but we were totally unfamiliar with both types of grapes/wines. The first was a Touriga Nacional, a fruit-forward grape/wine that originated in Portugal. The second was a Sagrantino, a grape varietal native to central Italy’s Umbria region. Having visited Tuscany and sampled a number of amazing bottles of Sangiovese, we were interested to try not only a neighboring varietal, but also the most tannic of the Italian grapes. 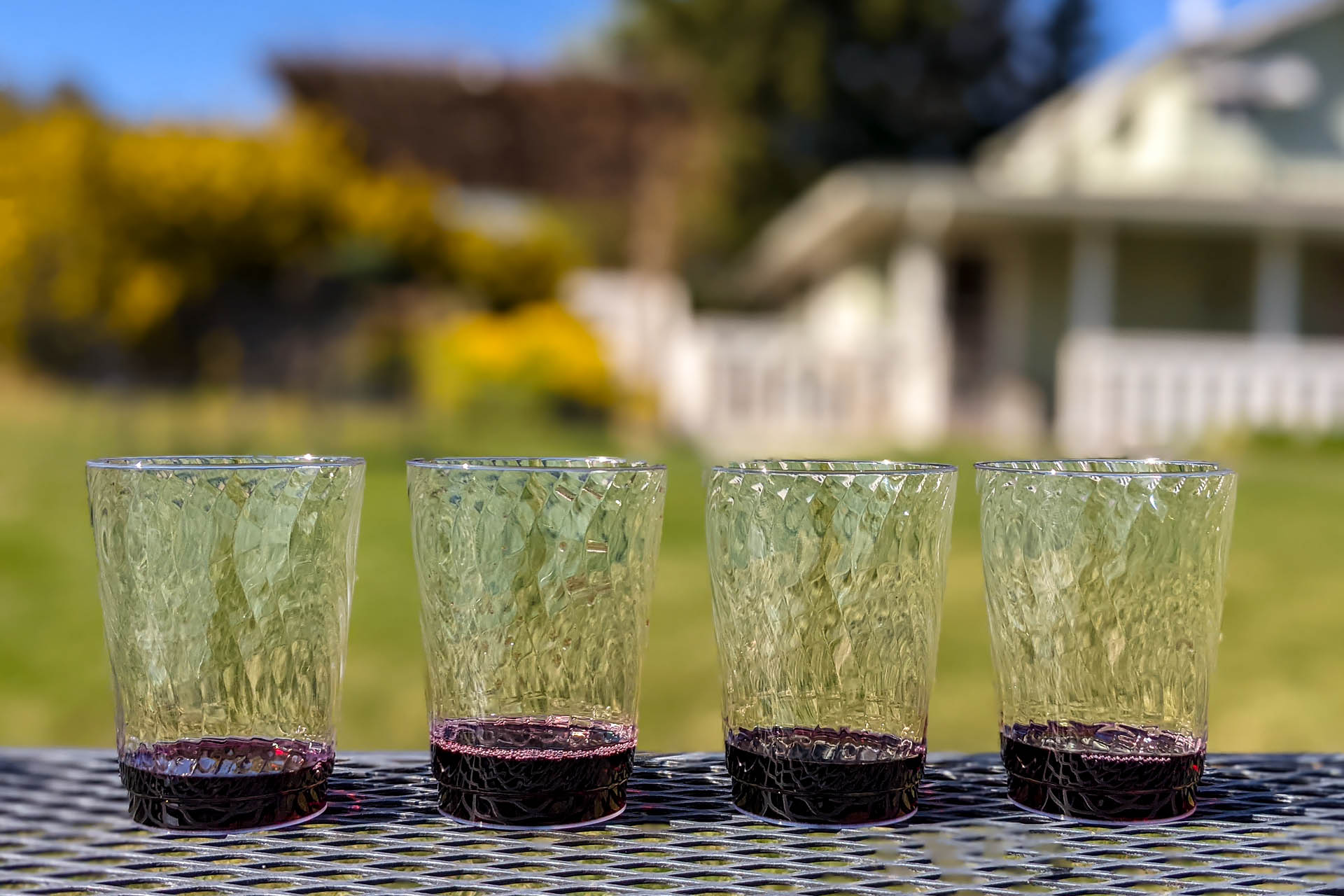 Stephan and I both found the tasting to be super interesting. Neither of us had ever tasted wine straight from the barrel, let alone been able to compare it to its bottled and aged counterpart. Moreover, the two wines couldn’t have been more contrasting. The Touriga Nacional was super jammy, and the sample from the barrel (2019) was more like having a pour of juice rather than wine. Conversely, the Sagrantino was indeed the most dry, tannic wine I’ve ever tried. The sample from the barrel (2019) was so dry, in fact, it felt like it sucked all the moisture from my mouth upon contact.

Expectedly, the bottled samples had mellowed each of the distinctive flavors dramatically. The Estate Touriga Nacional (2017) was still very fruit-forward, but much more balanced after bottling (although, still far fruitier than either of us prefers). The same was true for the Estate Sagrantino (2016). The tannins were dramatically toned-down after aging, and the wine was significantly more palatable. It was still a very dry red, but we much preferred this one to the fruity Touriga Nacional.

If you’ve never done a barrel tasting, we’d highly recommend it. In Washington’s wine region, most wineries offer their spring barrel weekend toward the end of April as they prepare to bottle. While we’ve toured some awesome wineries across the globe, our first barrel tasting here will definitely stand out as a memorable experience for both of us.

This was our first time sampling wines from Washington’s Yakima Valley region. Overall, we found several of the reds to be pretty good, though maybe not as big and bold as we would normally prefer. There was a real earthiness you could taste in the wines, and that seemed to hold true for each of the wineries.

If you’re in the area, stop by and check out some of these smaller wineries. Rattlesnake Hills and Naches Heights may not have the same local reputation as some of the larger wineries of prominent Red Mountain, Walla Walla, or Horse Heaven Hills, but you’ll get an intimate experience at some lovely, family-owned estates.