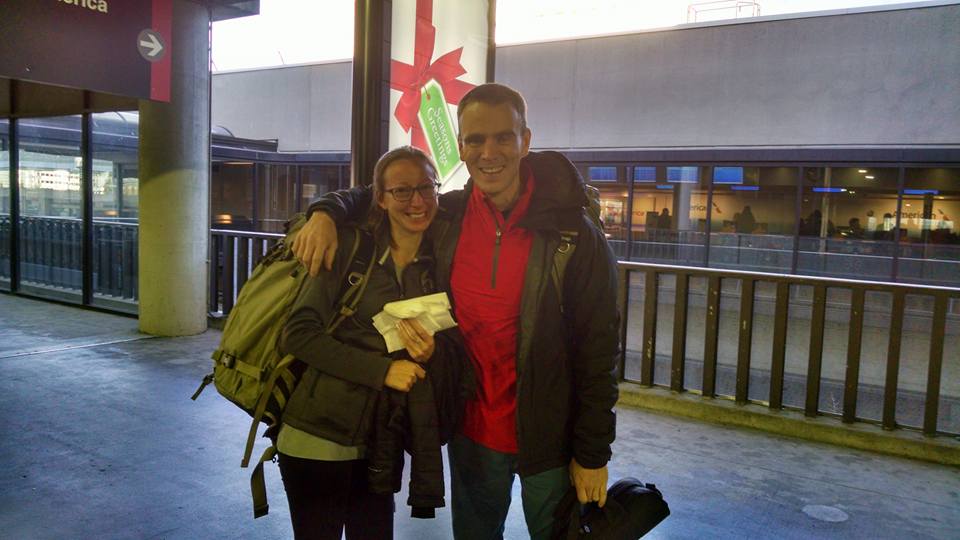 Leaving for this trip was nothing like I had envisioned… but I guess, what in life is ever just as you’d imagined? When we started seriously planning this trip about six months ago, I was a little skeptical, but largely excited, hopeful, and assured. I remember thinking enthusiastically, ‘January 3rd is the day you’ll travel the world… the day an enormous dream will come true!’ Well, now January 2nd had arrived and this distant dream abruptly hit me like a ton of bricks.

I awoke suddenly in the middle of the night and had a feeling of absolute certainty stronger than any other I’d previously had. At that moment, I knew that I could not go on this trip. I started panicking, sweating, and pleading to Stephan to wake up and help me. He sounded confused and – rightfully so – completely stunned. Nothing he said made me feel better, and nothing I said seemed coherent.

In the week and a half preceding Christmas, immediately before we went to NH to visit with family and friends, life had changed completely for us. I attended my doctoral graduation ceremony – the official and ultimate close to my degree, even though I defended my dissertation in May. Over the next two days, we spent 15 hours of each packing and moving everything from our apartment – a place that had been our home for more than six years, and the one place we’d lived together where I’d felt completely at home. Then, as soon as the last carload was packed up, we headed up I-95 for a 13-hour drive from Cary, NC to Swanzey, NH.

I think everything culminating and changing so suddenly came to a head in those early morning hours, causing me to doubt every decision I had made. I emphatically told Stephan we were driving back to NC at that very moment, reclaiming our perfect apartment, and begging for his job to be reinstated. He assured me that if I did that, I would hugely regret turning my back on this journey…

For the next 36 hours, I was in tears intermittently. Finally, when it came time to leave Sunday afternoon I was a mess. I cried to my parents as I left their house. I then sobbed uncontrollably to my aunt as we dropped off the car on the way to Boston, telling her through tears, “I told Stephan I don’t want to go anymore… and he’s not being very accommodating.” When we finally arrived at Logan, I cowered on the sidewalk of Terminal B, clinging desperately to the lapels of my brother’s wool coat and crying into his shoulder.

Somehow, I managed to make it inside the terminal. For the first time in my life, I sat and had a drink at an airport bar – two, in fact! Two gin and tonics in 43 minutes was just enough to take the edge off, as we watched the Patriots suffer a disastrous defeat to the Dolphins. We eventually made our way through security, to the gate, and onto the plane. As we started to push back from the jet bridge, I knew there was no turning back.

The rest of the travel day was fairly typical of a four-flight, 30-hour, 10,000-mile-long slog – exhausting and, at times, a test of patience and mental fortitude. With the exception of a couple of small bumps along the way, I’d say it was relatively smooth sailing, and that most of the turbulence was felt before even leaving NH.

Our first, and perhaps most vexing, surprise occurred when we arrived an hour late into LAX, when we had only a 2-hour layover to begin with. Although we had learned we’d have to leave the domestic gates, walk to the international terminal, and re-check in for the international flight, now only 55 minutes from departure, a much more exhilarating surprise awaited us at the Air Tahiti Nui desk.

As the [inattentive, seemingly useless, distracted-by-a-pretty-coworker] gentleman at the counter attempted to check us in for our flight to Auckland, he asked us if we had a visa, and informed us we could not board without one. I had read [and re-read] the visa requirements, and the U.S. was on a list of waiver exemption countries. After verifying this with the aforesaid attractive co-worker, he realized we did not, in fact, need a visa. Clickety-click-click, went his keyboard. Boarding denied. Clickety-click-click… talk with pretty female… boarding denied. Our new friend informed us that we were not allowed to enter New Zealand without an exit flight and, without said departure, we could not board the plane. Apparently, in the fine print on the NZ state department page, it does state that one needs both an entry and departure flight from the country (I swear, I am a conscientious individual and don’t understand how neither Stephan nor I found this somewhat critical piece of information). Already pressed for time, we started ripping apart backpacks in search of the cell phone and a credit card. Using LAX’s super speedy [sic] wi-fi, we pulled up a booking site, decided in about 4.5 seconds that we’d like to leave Auckland at 6:30 a.m. on February 2nd, and completed all the required fields. We then frantically flung the phone at Cassanova, who was able to finally hand us our boarding passes.

We cleared security and were then off on a dead sprint for gate 155, reminiscent of the scene from Home Alone (but without Chuck Berry’s ‘Run, run Rudolph‘ accompanying us). To our complete astonishment, we miraculously made it to the gate with more than enough time. Unfortunately, the plane was not yet even at the gate, which meant a somewhat lengthy wait on the airport floor after the ultimate adrenaline rush. Fortunately, a couple checking in with the gate agent decided to give us some brief entertainment when the gentleman suddenly dropped to one knee at the counter and proposed. I know this is not an uncommon event, but I’ve never directly witnessed a complete stranger propose to someone. It was kind of interesting and fun to observe, though kind of awkward at the same time.

Two hours after our scheduled departure, our overnight flight from LAX to Pape’ete finally took off. I hate flying at night, as I can’t see out the window, but this flight actually turned out to be almost peaceful. For much of the flight, the sliver of moon illuminated the night sky enough that I could continually distinguish the horizon line of the ocean, dotted with puffy clouds, and the southern cross shined brightly, almost guiding the jet’s left wing.

Our second, albeit less stressful surprise came after we arrived 1.5 hours late in Auckland. We thought a three-hour window would be sufficient buffer before our next flight; however, we were incorrect. After sluggishly emerging from row 37 of the aircraft, clearing the staggering immigration line, passing through the bio-screening unit, moving through the x-ray machines, jogging 10 minutes to the domestic terminal (seriously?!), and arriving at the check-in kiosk, the little computer greeted us with, ‘sorry, check-in for this flight has closed.’ Really, we knew when the plane landed we had very little chance of ever making it. Luckily, we knew that Air New Zealand ran flights from the north to south island every hour or so.

We were able to hop aboard the next outgoing flight, which meant only an hour’s wait at the gate and a quick one-hour jump to Christchurch. Here, I would like to give a quick shout out to Air New Zealand. I think the pilot had a need for speed, as I have never seen anyone reach cruising altitude that quickly. As soon as we reached cruising altitude, the very friendly staff raced down the aisle throwing a handful of crackers and fresh, local cheese at all the passengers. As soon as that was distributed, they announced the forthcoming complimentary bar service. Stephan selected a surprisingly tasty IPA from Auckland, while I chose a local red wine. I expected it to be served in a little Dixie cup, but rather got a hefty plastic cup with wine up to the rim. Being such a short flight, the efficient staff encouraged us to slug it back and hand over the cups before our final speedy descent.

So, after more than you cared to read about, we made it to New Zealand. Despite the couple of trials, I consider the transit a resounding success, as we made it safely to our destination. That’s really all you can ever ask for. And after being on, what felt like, a runaway train, I feel fairly accomplished. Those of you who know me well are acutely aware of my still-present (if not somewhat reduced) fear of flying. I never thought I’d actually be able to cross the Pacific. And even though I was so uncertain and anxious to overhaul my life and adopt a lifestyle of travel for several months, I think I am happy with the decision. I know it’s only day 1, but regardless of how long I actually stay abroad, I will know that I at least mustered up the courage to give it a shot.