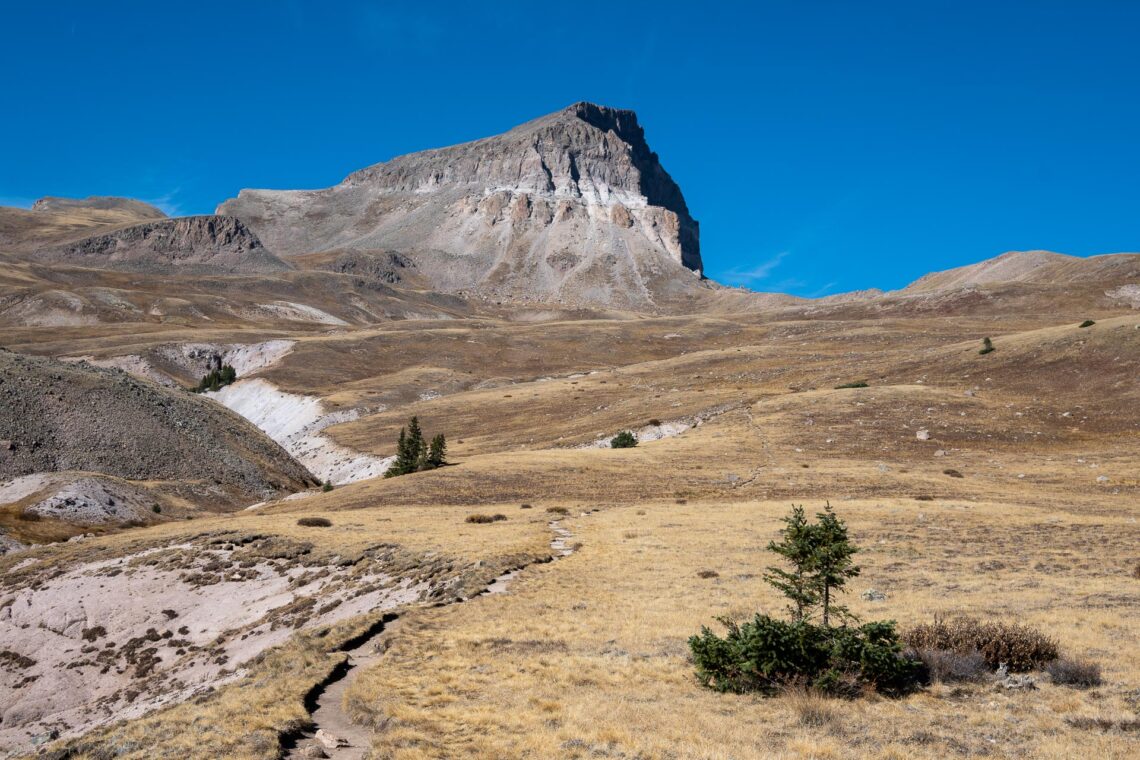 We quickly learned that just getting to many of Colorado’s 14ers is a feat in and of itself, never mind hiking. On our first attempt at driving to Uncompahgre’s Nellie Creek Trailhead, we never made it even near the mountain (largely a Google Maps fail, but an adventure nonetheless). Even if you do ultimately navigate using the correct route, the roads are rough and rugged to say the least, and not always accessible to standard vehicles. To get to many of the trailheads, you’ll need a high-clearance, four-wheel-drive vehicle. Our second effort at reaching Uncompahgre proved much more successful, although our Subaru Crosstrek still didn’t quite make it to the actual trailhead.

The Nellie Creek Trailhead is about 9 miles northwest of Lake City, Colorado. Traveling south on 149 from Lake City, take a right onto County Road 20 (Henson Creek Rd/Alpine Loop Scenic Byway)2 and drive for five miles. This section of dirt road is decent, and should only take about 15 minutes. After roughly five miles, turn right onto Nellie Creek Road (Nellie Creek Trail #877). You’ll follow this road for 4 miles until it dead ends at the trailhead. If you have a high-clearance, four-wheel-drive car, you may make it. If you get part way up and can go no further, there are a couple spots along the way with enough room to park a car (one about halfway up the road, another about a half mile further). That said, there’s not a lot of room to turn around, so you may end up going down in reverse if you get stuck.

The road is in really rough shape in spots. There are also two creek crossings you’ll have to navigate – one about 1.8 miles up the road, another about 2.7 miles up the road. While the first one was tough but manageable, the second one thwarted us. We almost made it, and probably could have if we’d taken the time to rearrange some rocks. However, we threw in the towel after three failed attempts and ultimately backed about 0.4 miles down the road to a spot where we could properly park. 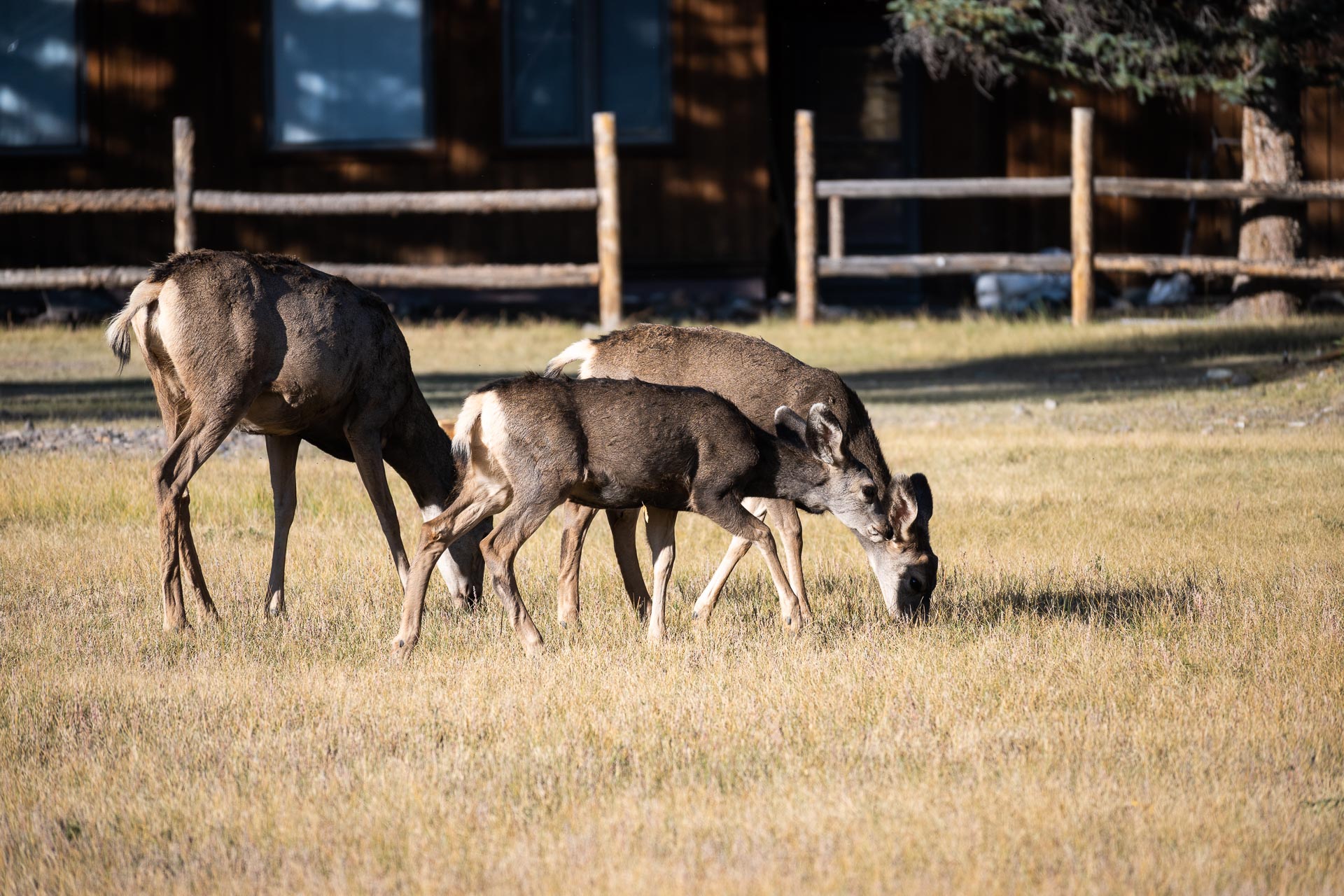 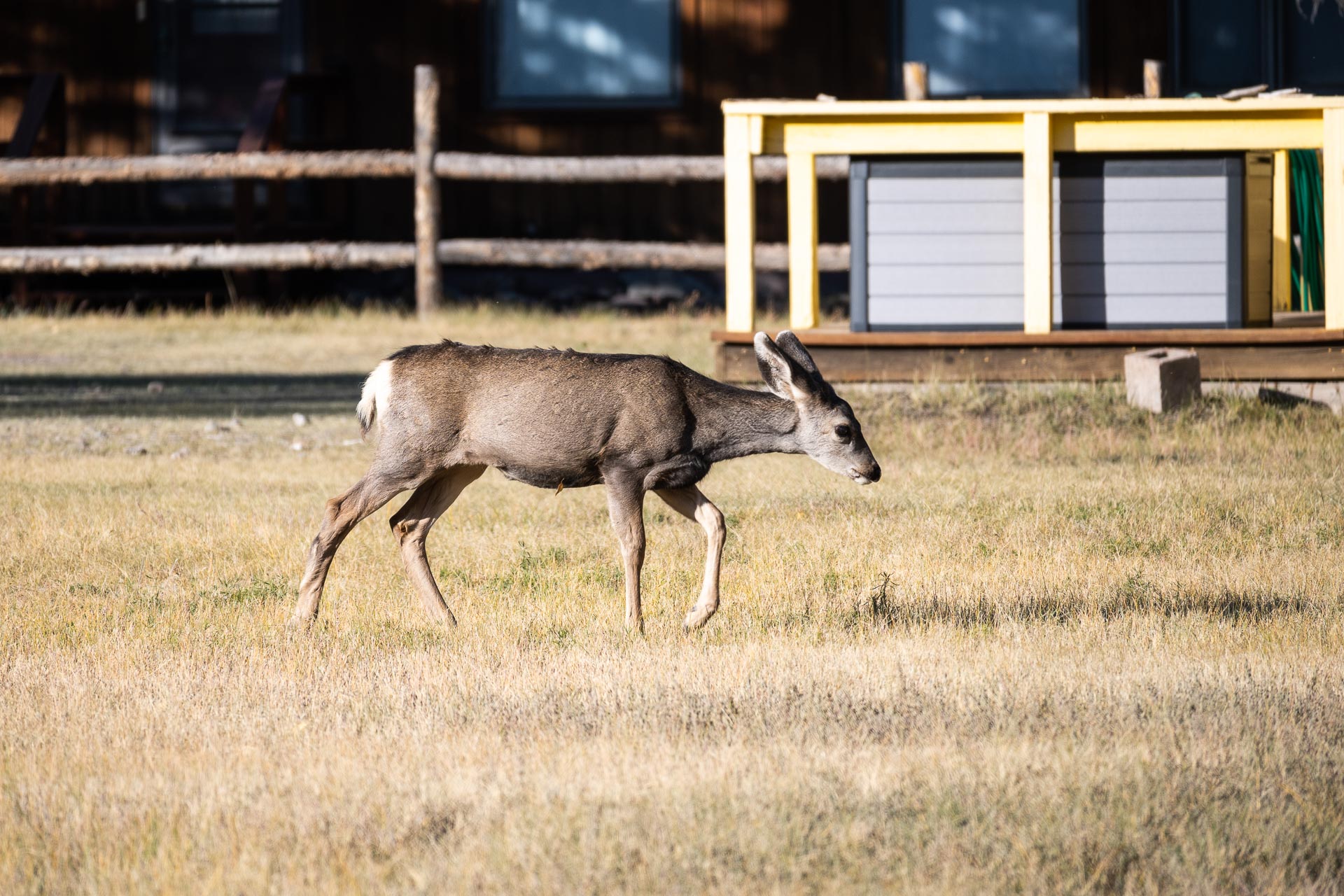 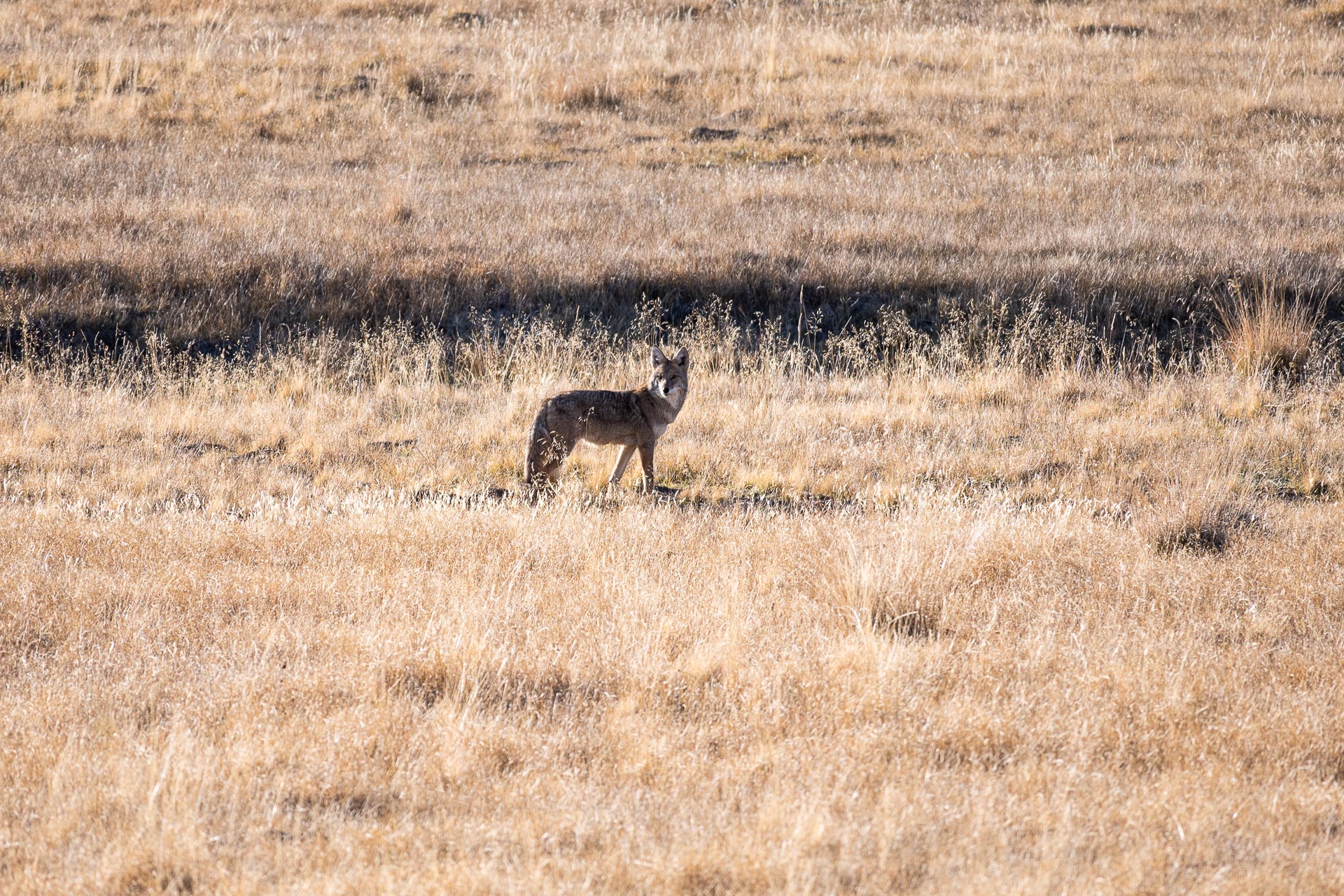 Beginning from the Nellie Creek Trailhead, the route is about an 8-mile out-and-back with around 3,000 feet of vertical gain. Because we parked below the second creek, however, our hike clocked in at 11.6 miles with almost 4,500 feet of gain. If you’re forced to park at the bottom of Nellie Creek Road, along Henson Creek, the roundtrip hike will be closer to 15–16 miles with even more vertical gain.

From the trailhead, the path is only in the forest for about half a mile before it opens up into rolling, alpine meadows. As you traverse the meadows, you’re rewarded with unrelenting views of Uncompahgre’s slanted summit to the west. The trail’s quite gradual through here as it meanders toward the craggy crest. 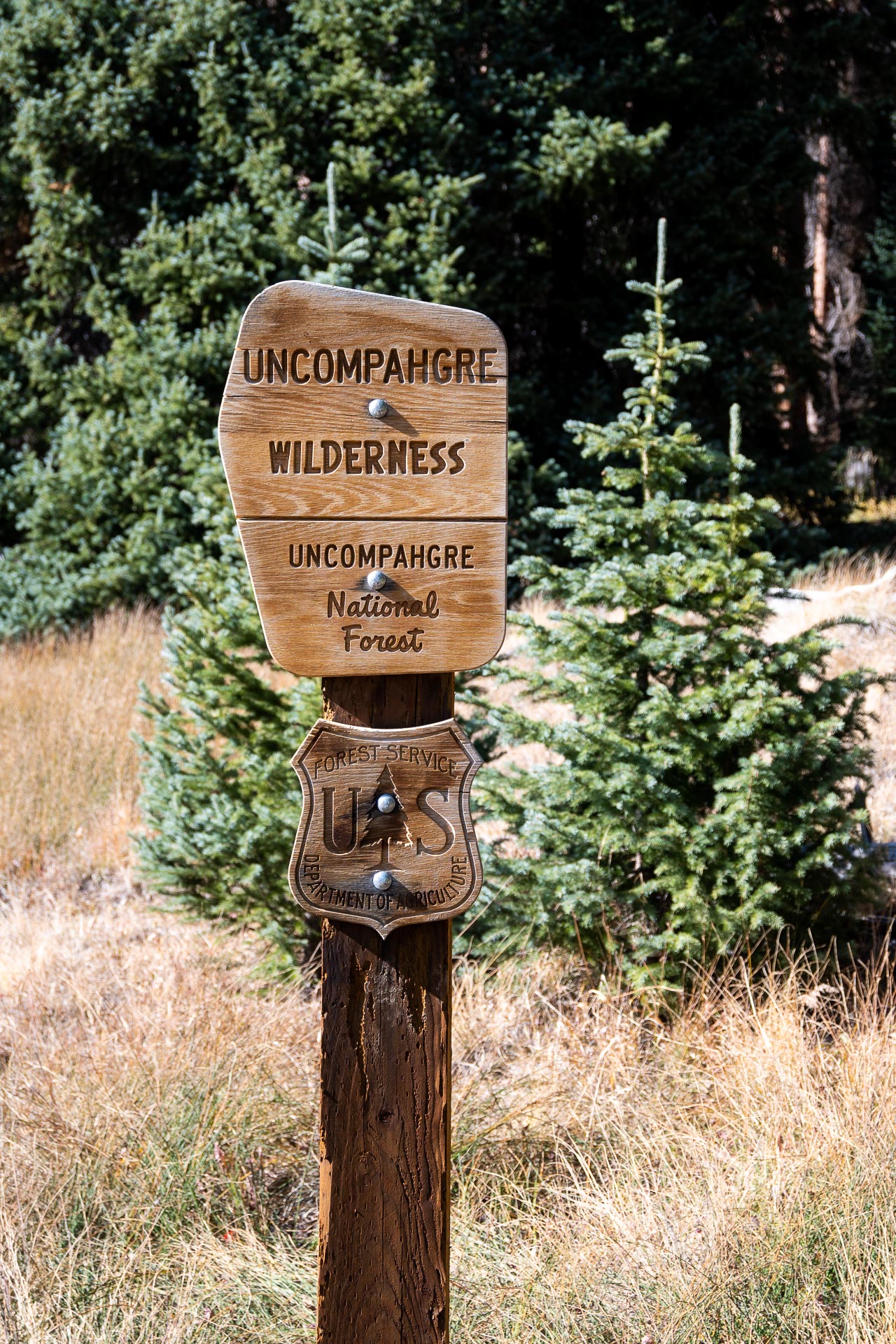 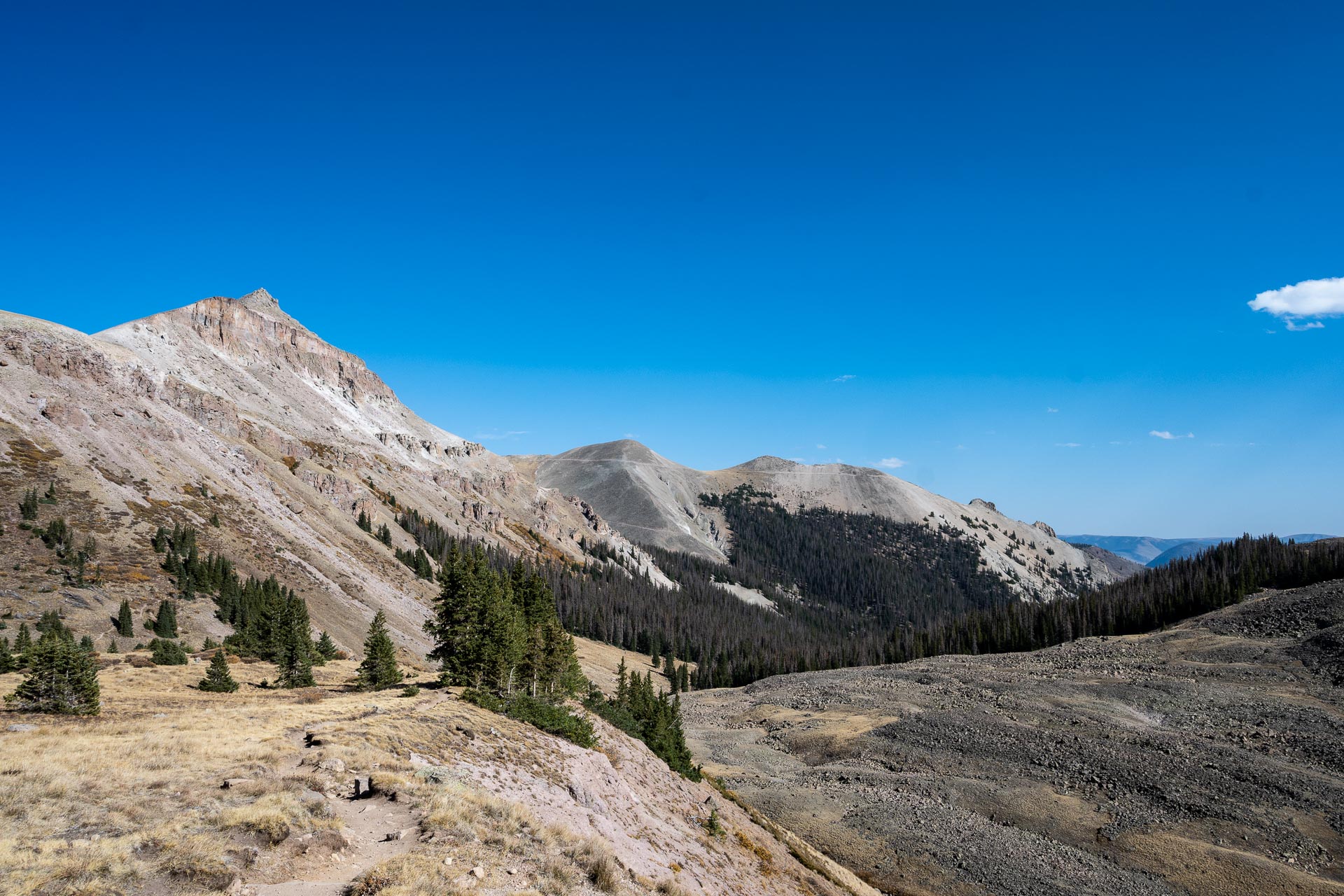 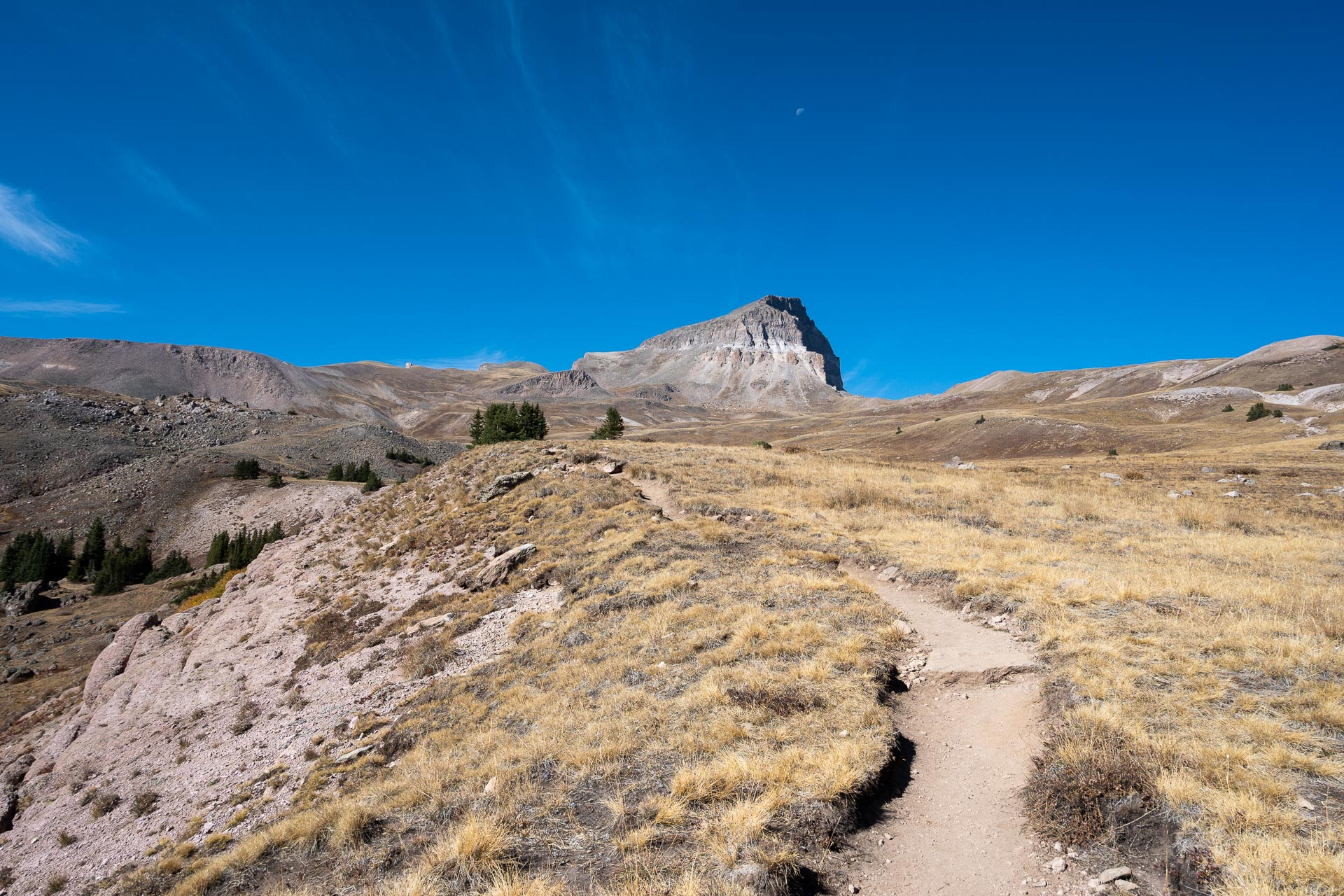 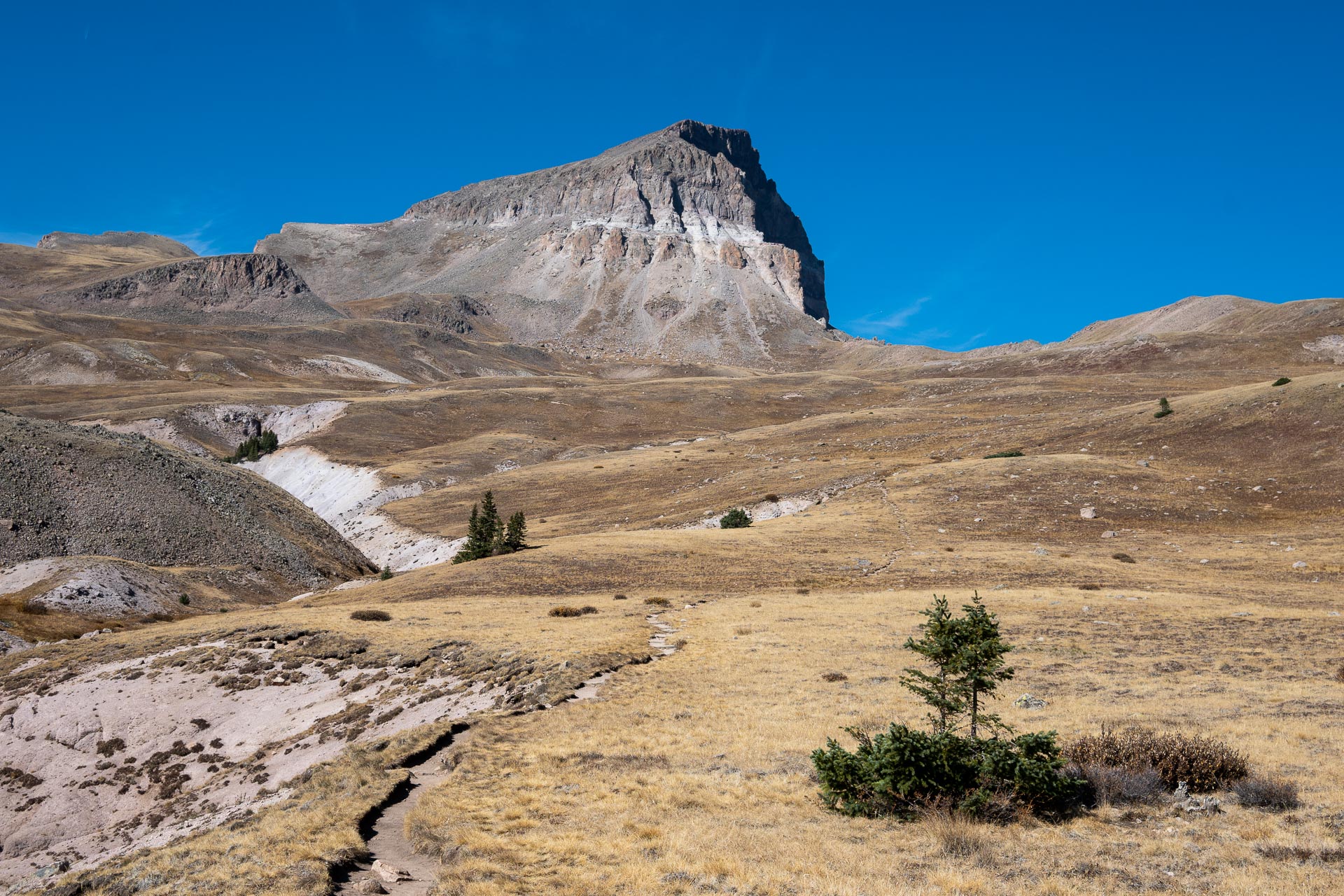 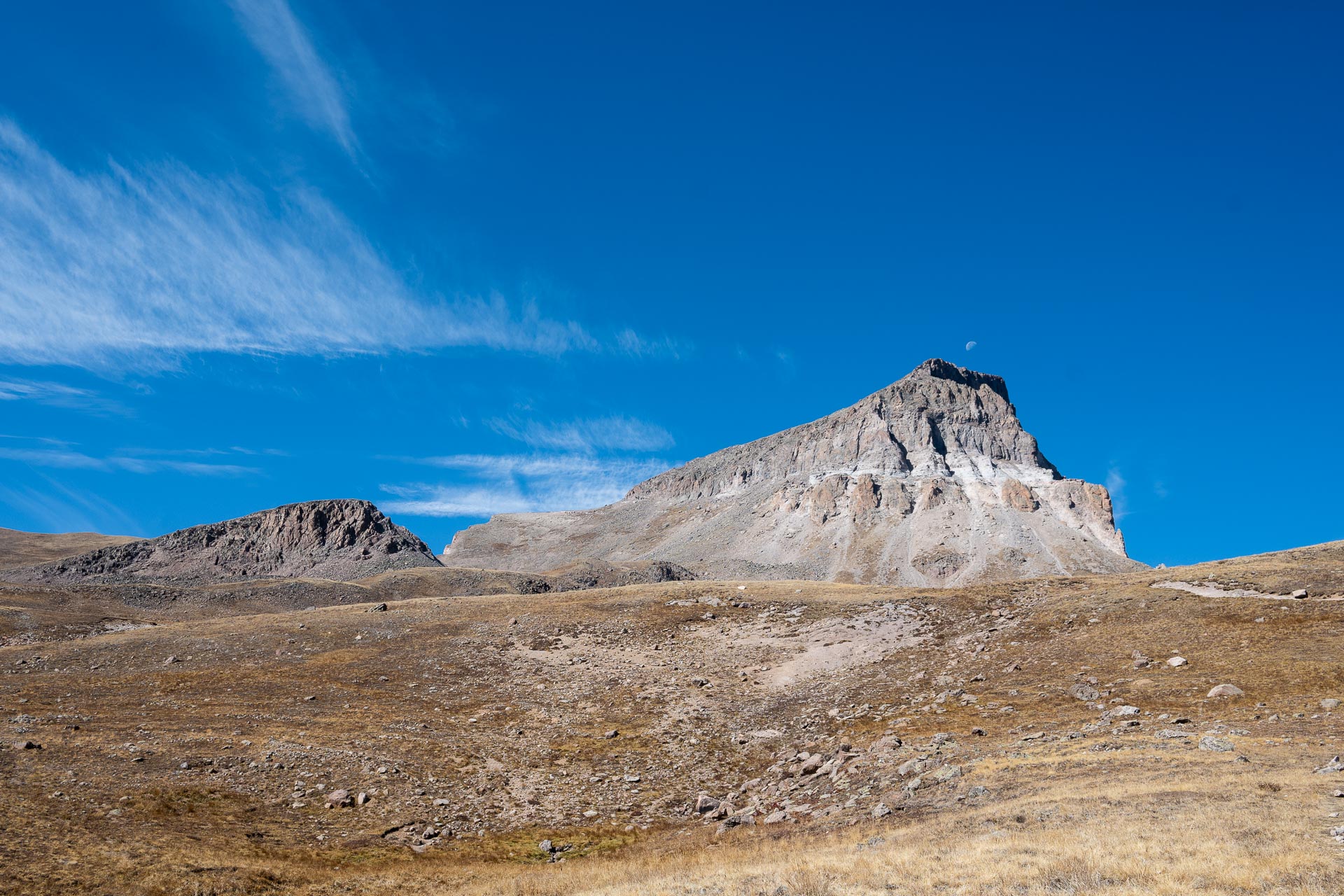 The trail then ascends the summit via the mountain’s south ridge, climbing steadily with just a few switchbacks. Atop the crest of the ridge, the well-worn path abruptly gives way to a few hundred feet of steep talus. The path comes and goes through here, and some of the rock is fairly loose, so use caution. After beginning up the talus, you’ll see a chimney (tower) to your right. After reading some hike reports, it seems that some hikers choose to go to the right of the chimney where the rock is more stable. However, the path to the right is less discernible. We ultimately chose a line and continued left on the loose section – not my favorite, but requiring slightly less route finding. 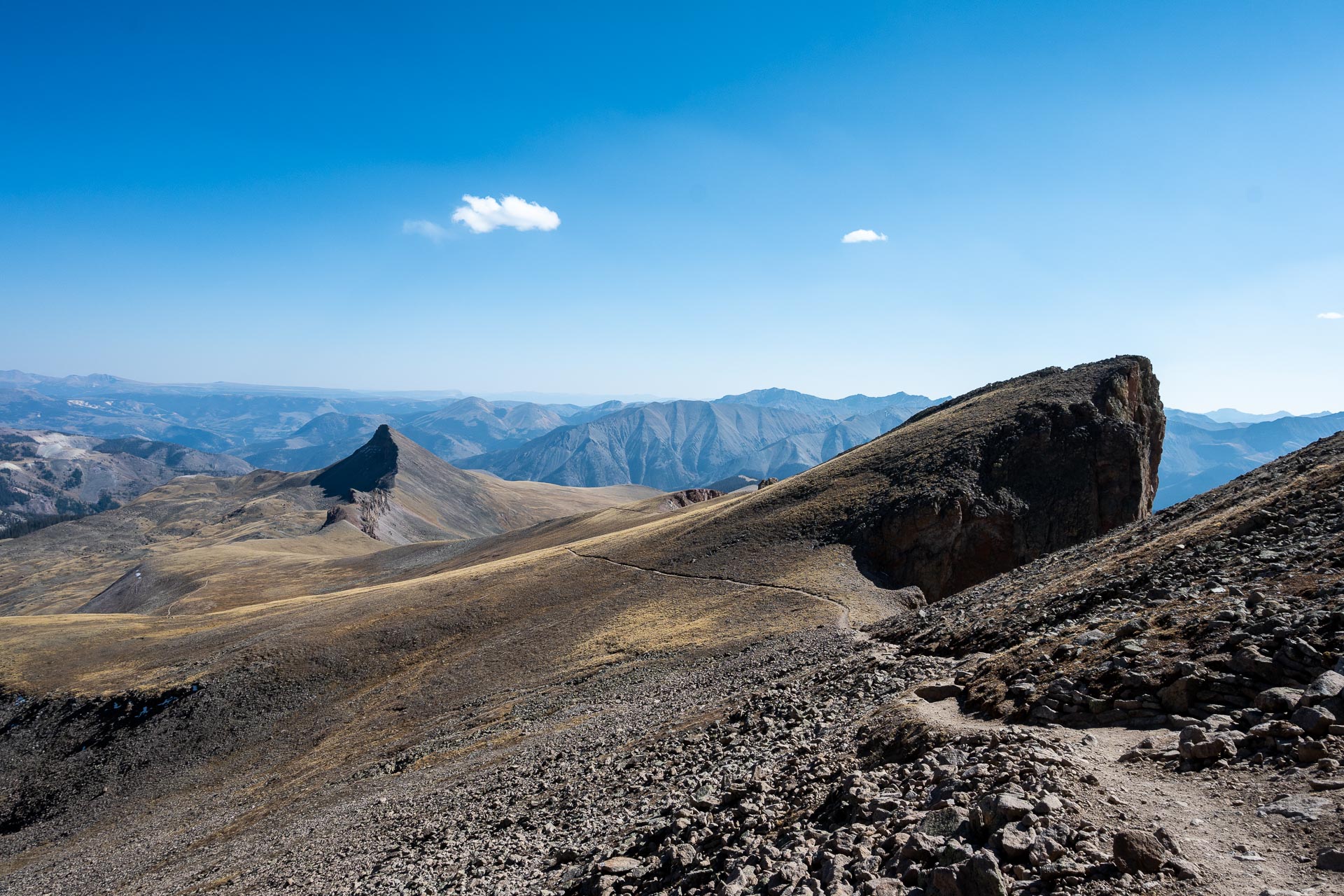 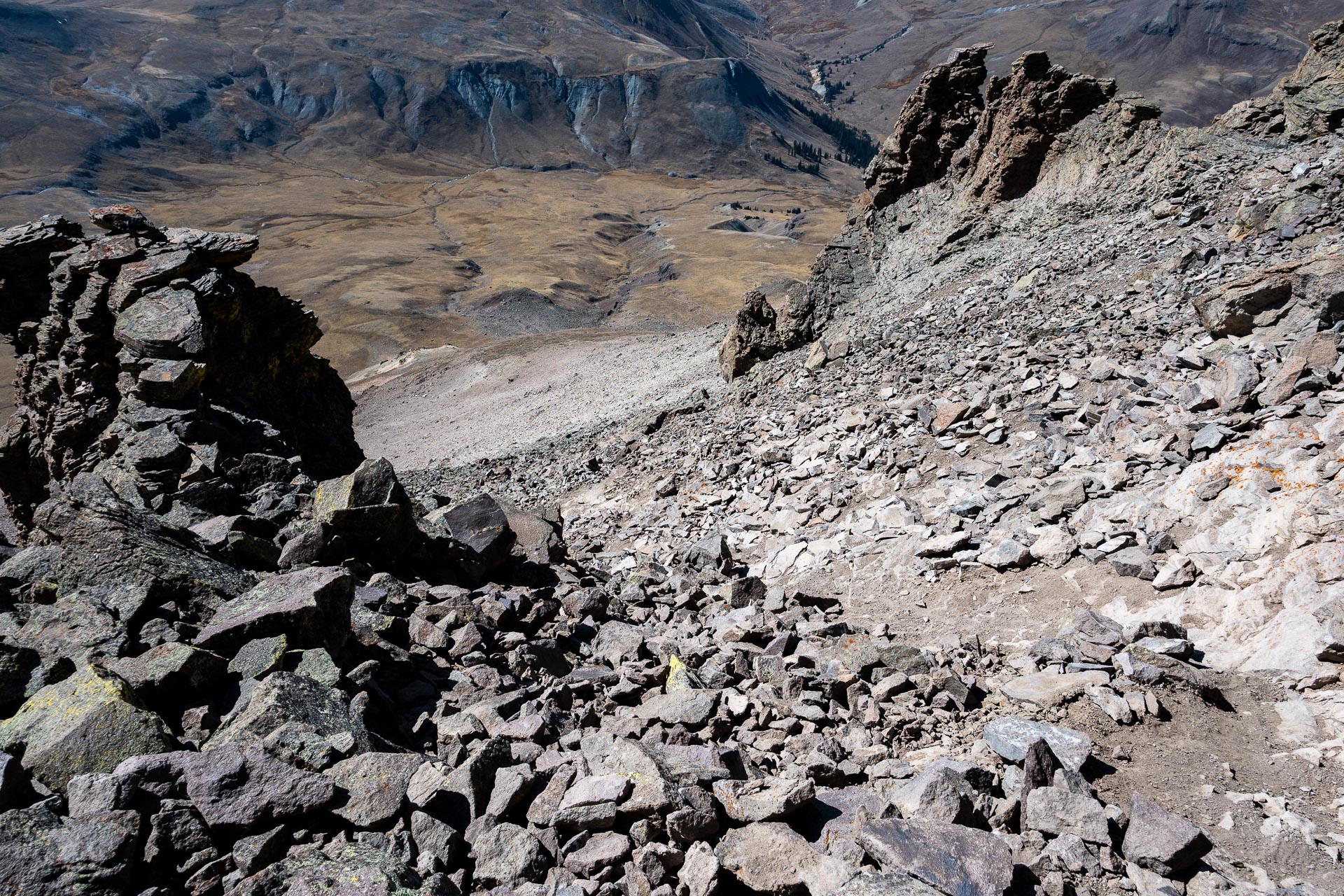 After the one short portion of scrambling, the grade eased and we regained a well-defined trail to the top. The views from the summit were spectacular, and we were fortunate to have the most gorgeous early October weather. To the west loomed the unmistakable peaks of Matterhorn (13,590’) and Wetterhorn (14,015’), as well as Coxcomb’s distinct summit (13,656’). We hung around the summit for significantly longer than usual, enjoying a well-earned lunch and exchanging trail recommendations with the one other hiker who was up there. 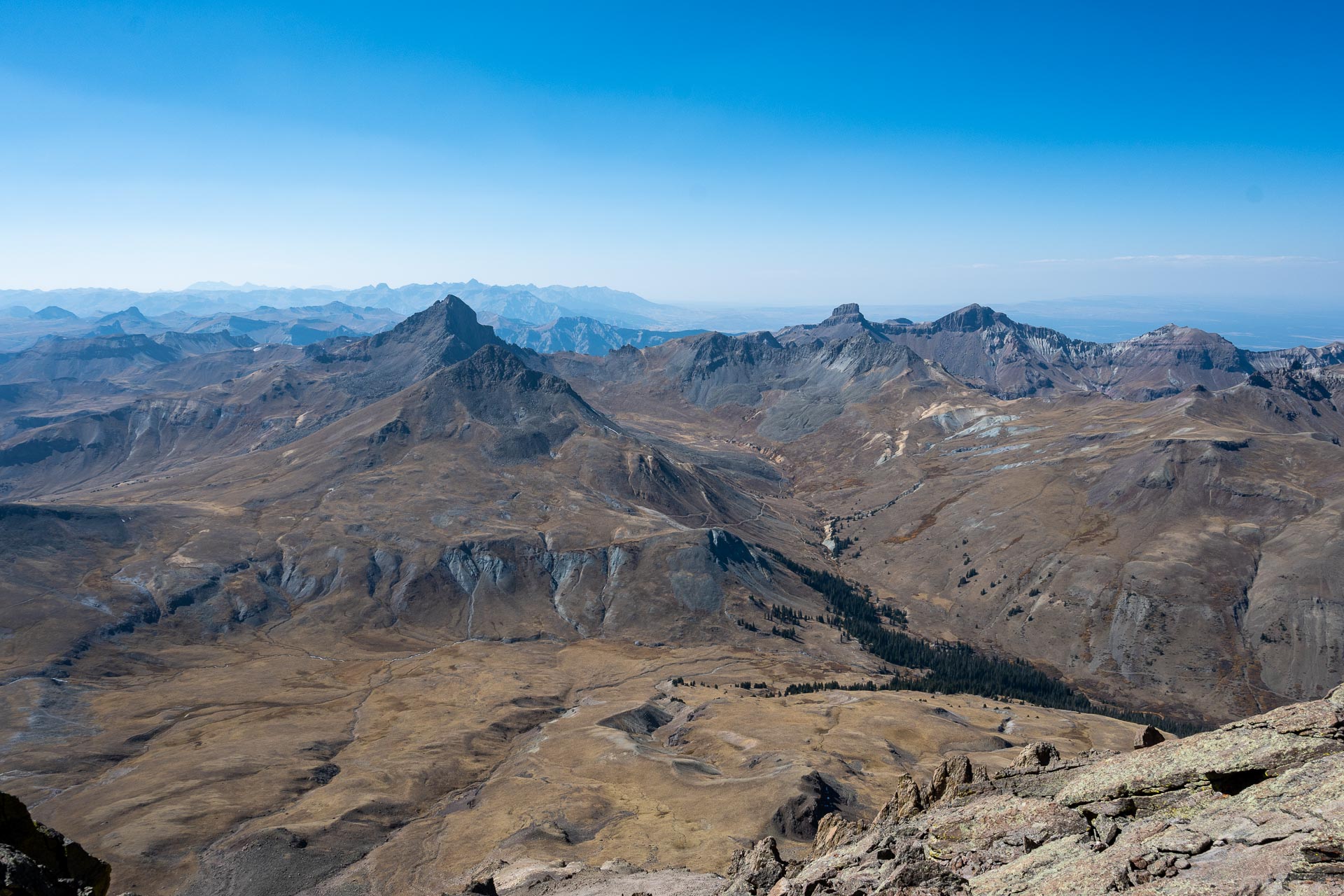 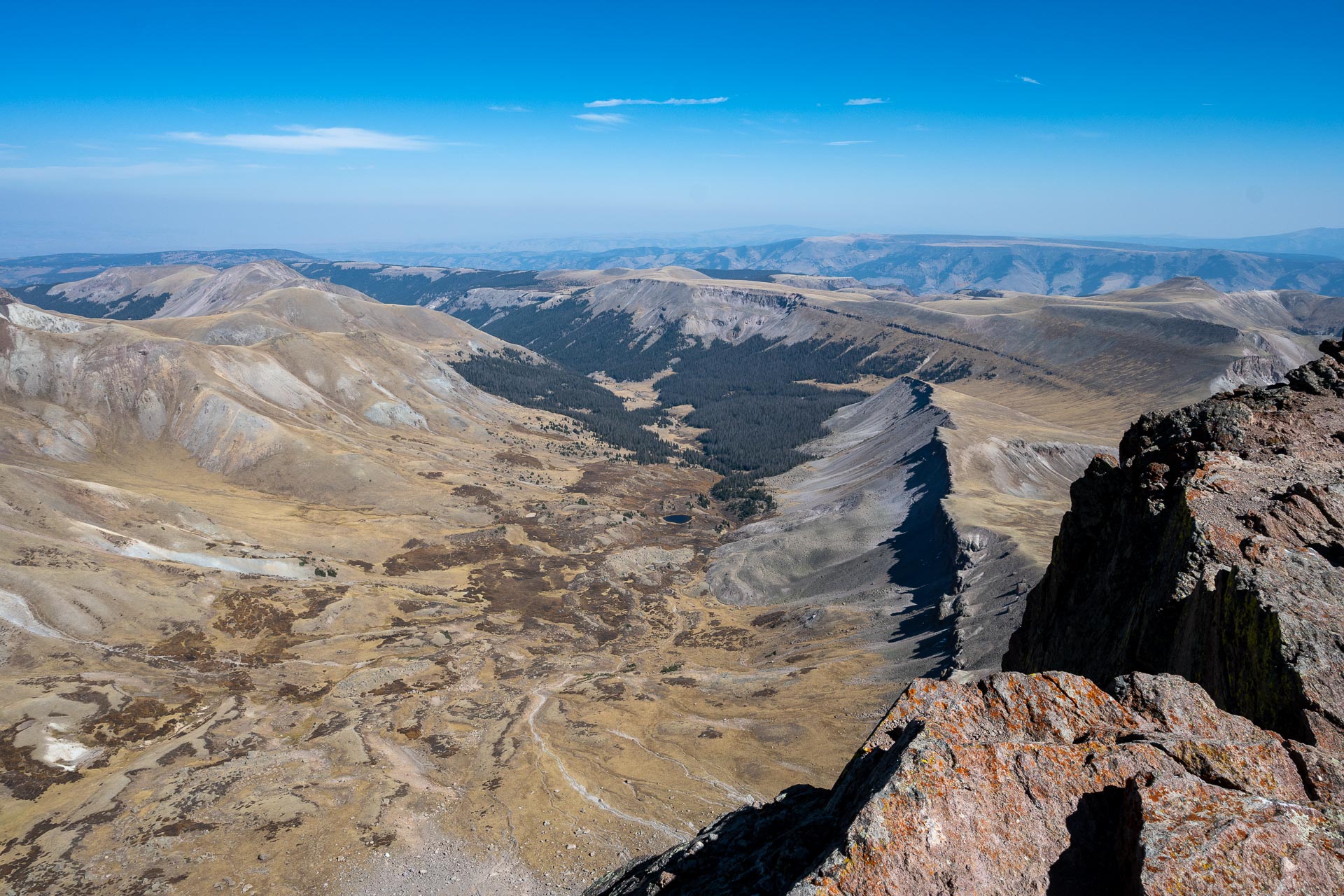 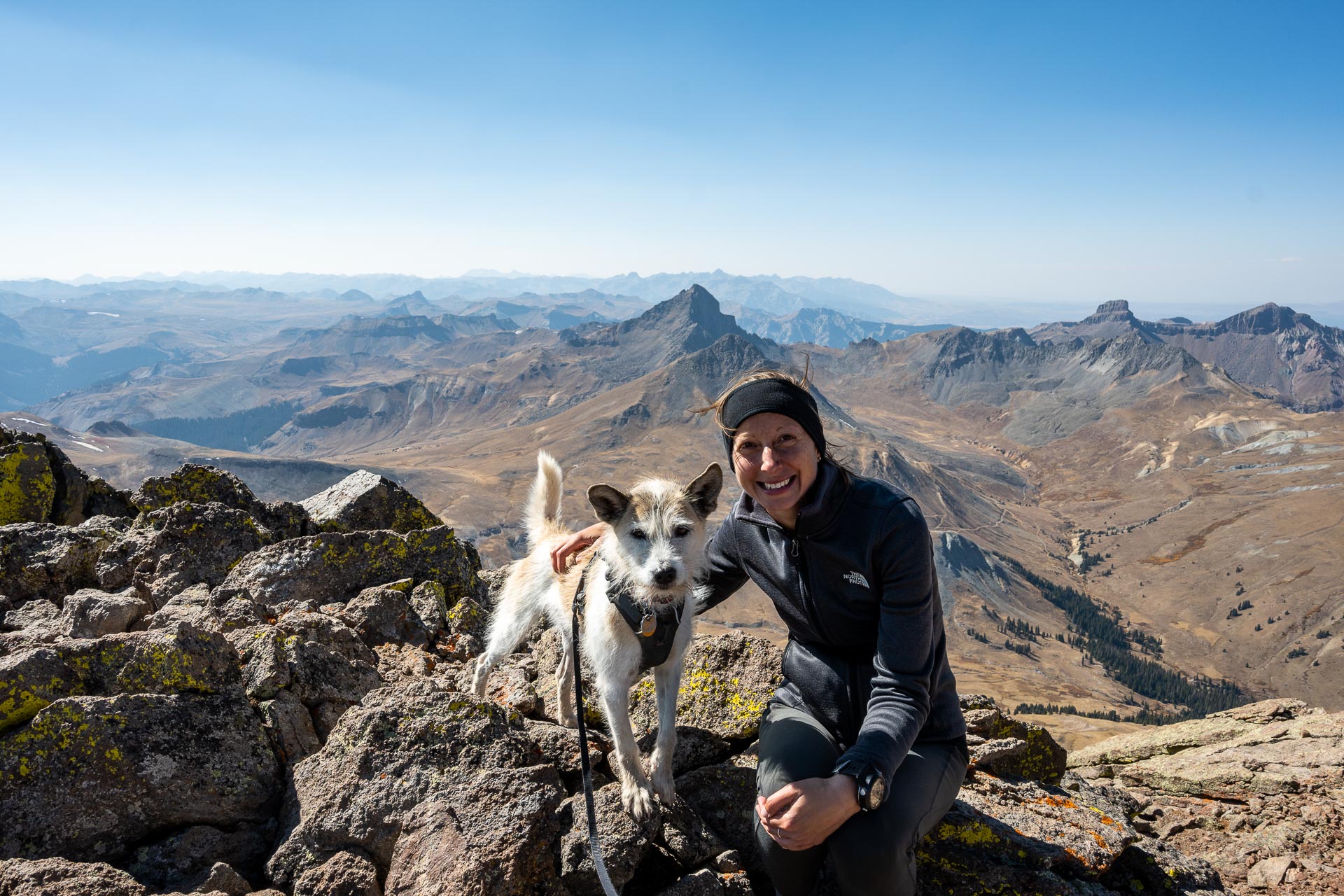 Overall, it was a beautiful hike. That said, I guess it begs the question: With the hike taking two navigation attempts, a total of 14 hours driving, and an ultimate abort 1.7 miles from the trailhead, was Uncompahgre worth it? I think we’d both say absolutely. The trail was almost entirely through open, alpine scenery, and the short scramble to the summit up some exposed talus added a little bit of a challenge. Sanchez had an absolute blast, completing her first 14er with ease, and we saw only 5 or 6 other people the entire day. There’s really not much more you could ask for. 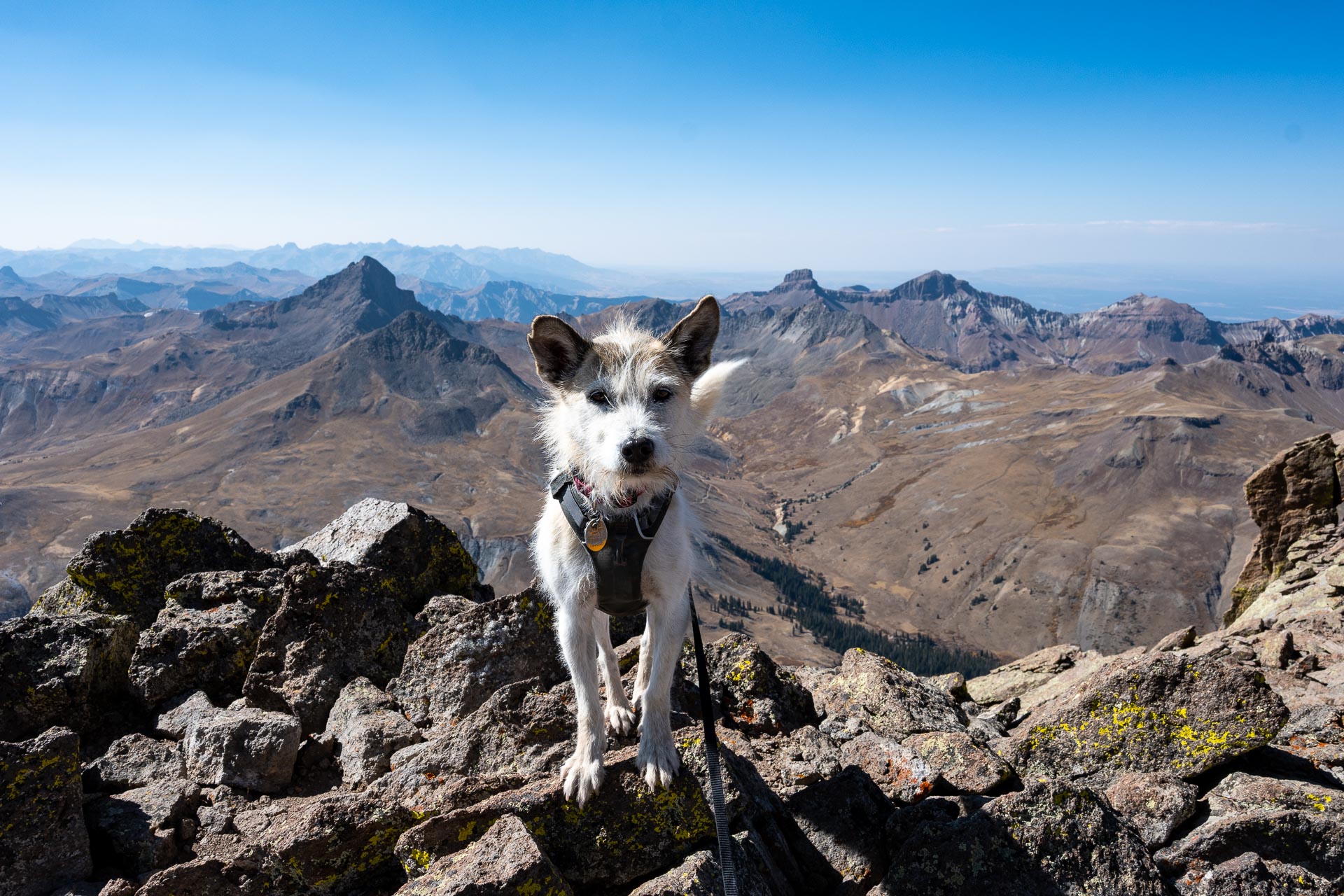 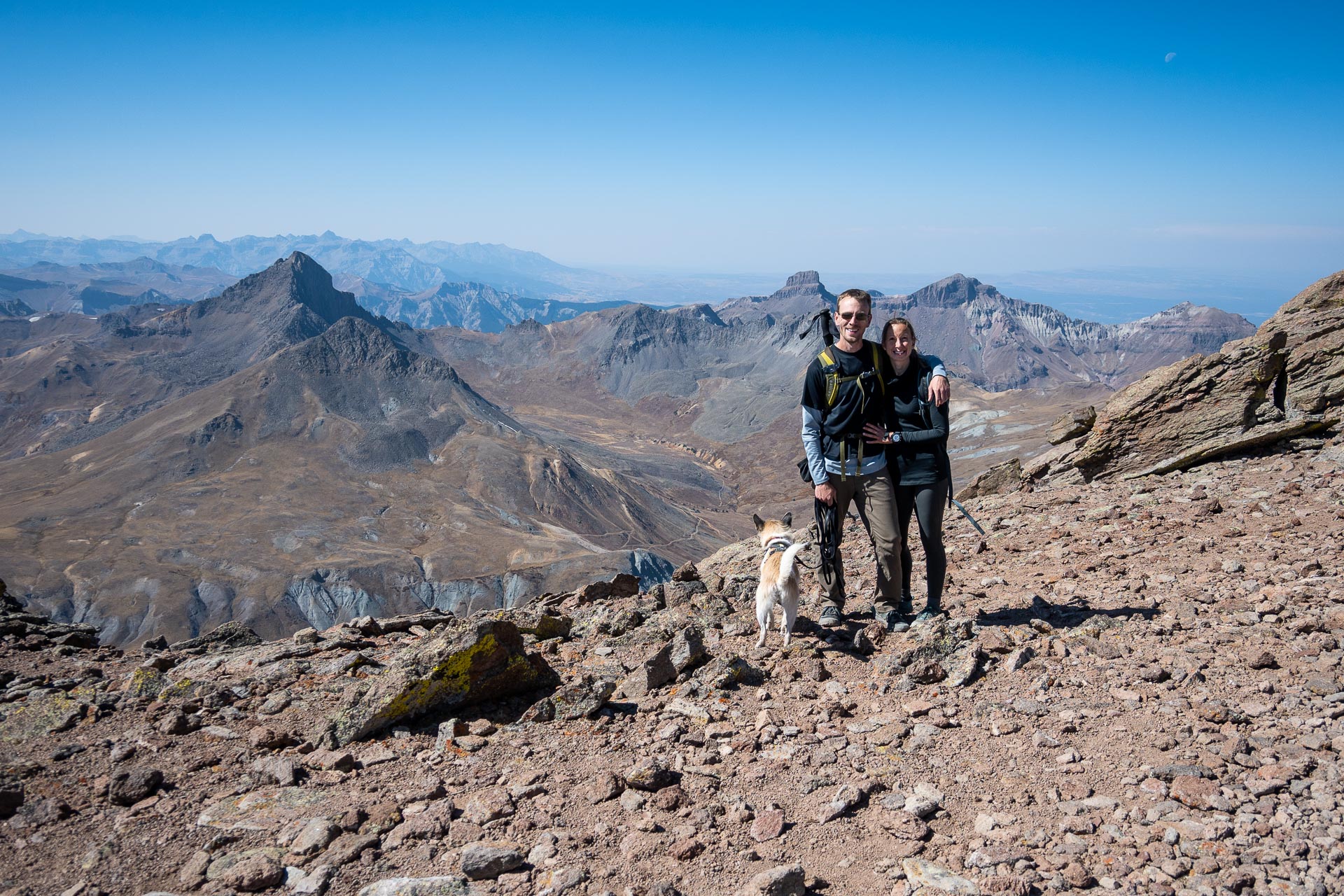 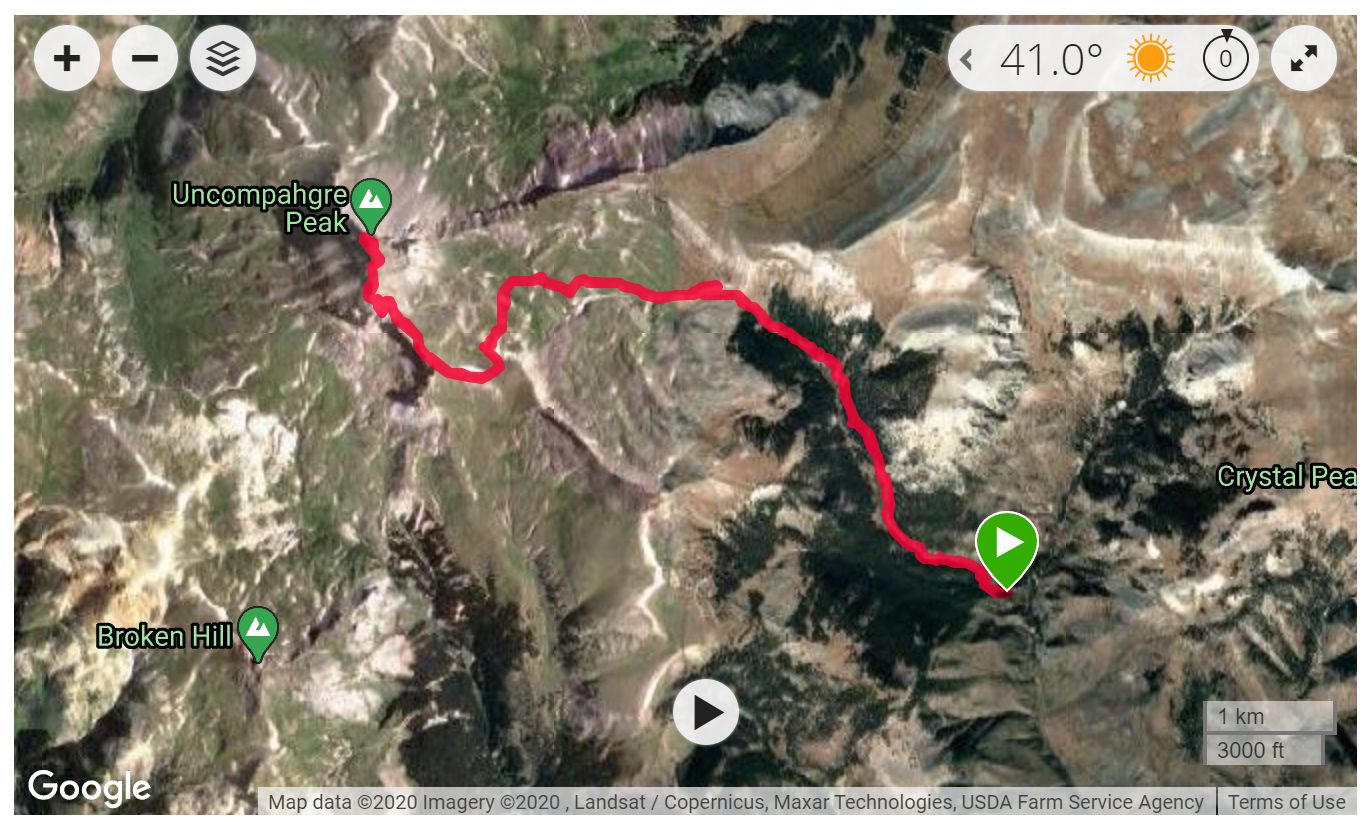 1For more information about hiking Uncompahgre, as well as Colorado’s other 14ers, check out route specifics and difficulty here: https://www.14ers.com/routes_bydifficulty.php. It’s a great resource for getting started, listing things like exposure levels, rockfall potential, as well as detailed photos, maps, and recent hike reports.

2Henson Creek Road (County Road 20/Alpine Loop) is closed seasonally from December until May. Check the road status before embarking on your hike if it’s in that uncertain shoulder season.