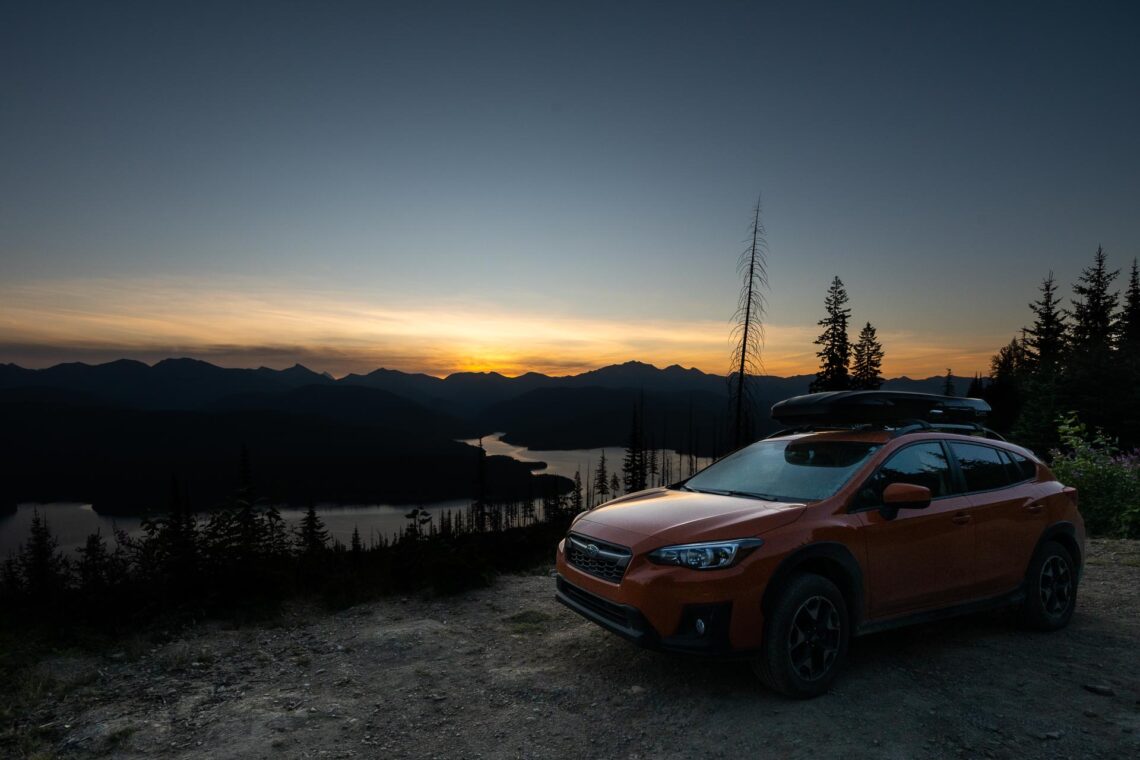 Holy cow, it’s been forever since my mom let me write up one of our adventures! I feel the same as, presumably, most of you readers – that the pup’s perspective has been severely lacking on our blog lately. I keep asking to post my own hike report, but my mom’s overly concerned that my narrative will be too narrowly focused on ground squirrels and summit snacks – delicious fish skins, exotic jerkies, freeze-dried hamburgers, random animal parts… Really, it’s censorship at its finest, if you ask me.

One Friday afternoon in August, I watched eagerly as my mom and dad did the usual pre-hike packing routine. Two packs, sunscreen, camera gear, boots… comforter, blanket, pillows? ‘What in the world was this?’ I wondered. They explained we were going car camping after our hike – something they called boondogging. Sounded perfect for a dog. Apparently boondogging boondocking (my mom claims this is the correct word) is when you camp without amenities, and outside of a formal campsite. Being from Thailand, I’d never heard of such a thing, but it sounded like it might be fun.

After our six-mile hike, we drove to a spot my mom had been coveting for nearly two months. The primitive campsite within the Flathead National Forest had a small firepit and a sweeping view of the Hungry Horse Reservoir and Flathead Mountains. It was isolated. It was scenic. It was perfect.

Upon securing our spot for the night, my dad told me to get out of the car while he set up our bed. I was confused. I watched curiously as he collapsed the backseat and threw down a poofy pile of blankets and pillows. I was floored; I had no idea a car could turn into a bed! He then reached into his pack and whipped out a couple peanut butter and jelly sandwiches and snacks, and it was just too much to handle. I couldn’t believe we’d never done this boondogging boondocking thing before. I could jump out the hatch and sniff, then climb right back into my cozy coverlet and snuggle up with my people… brilliant! 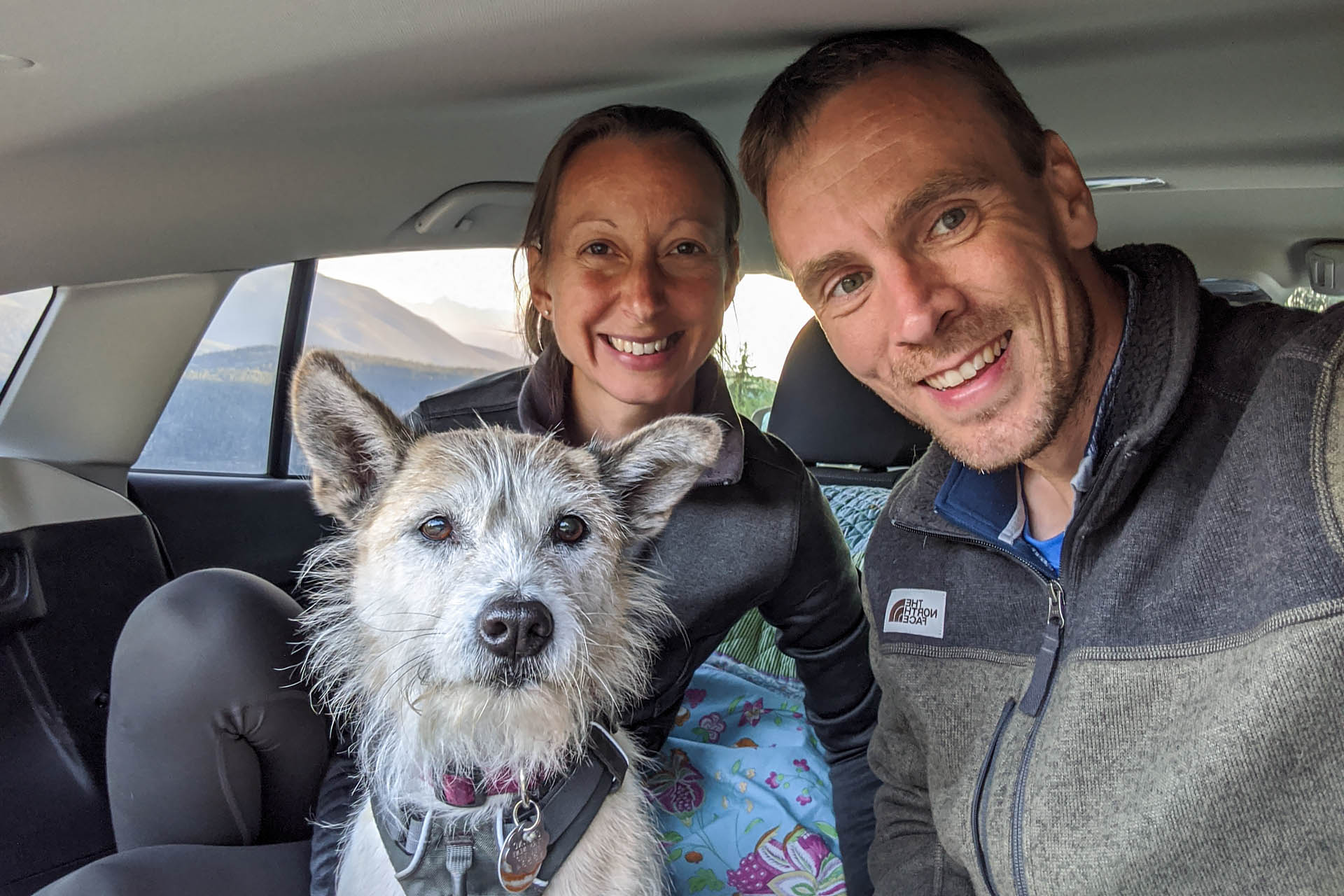 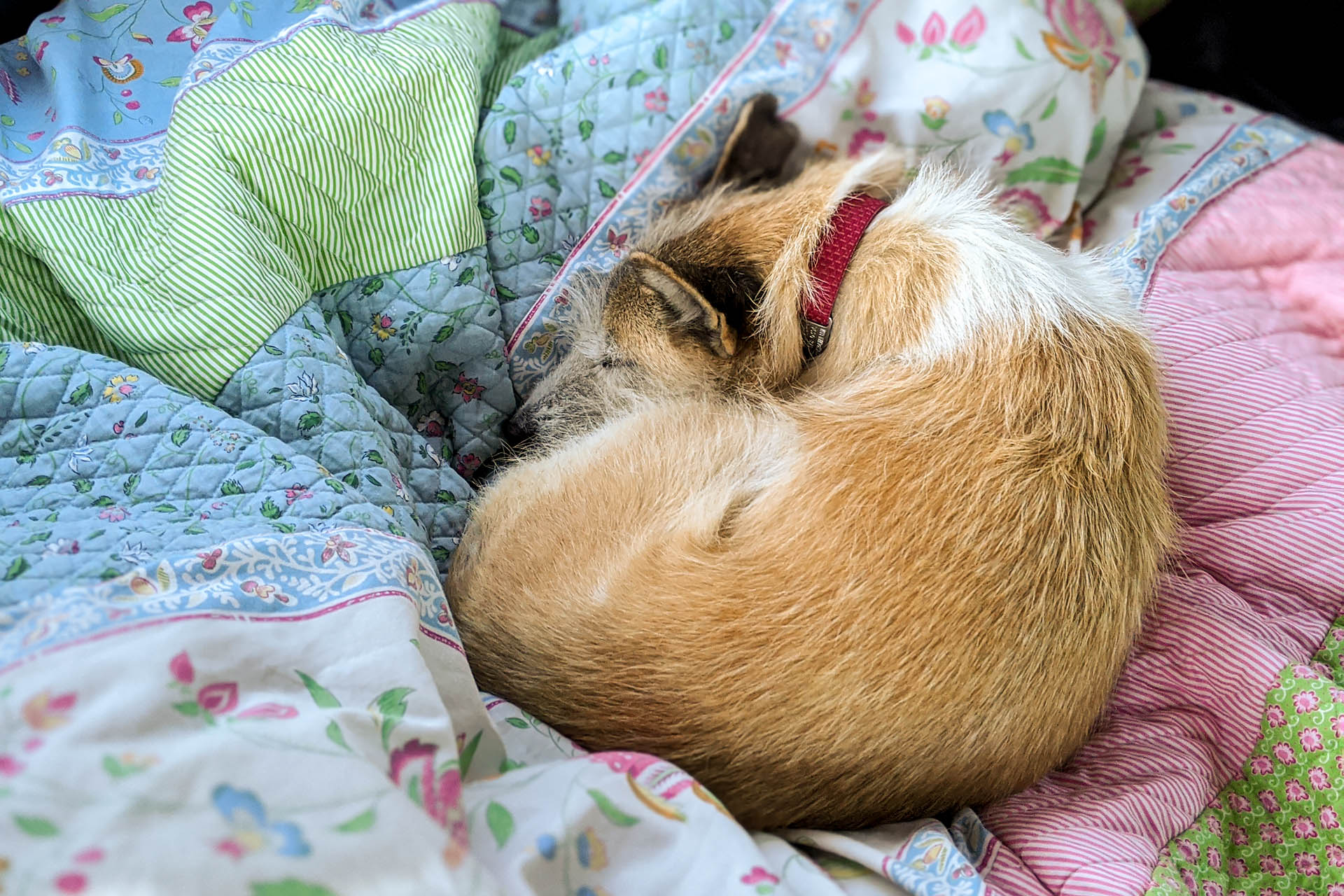 After eating dinner in bed (seriously?!), we watched the sun set over the reservoir. The warm light on Great Northern and Mount Grant was beautiful, even to a doggy: 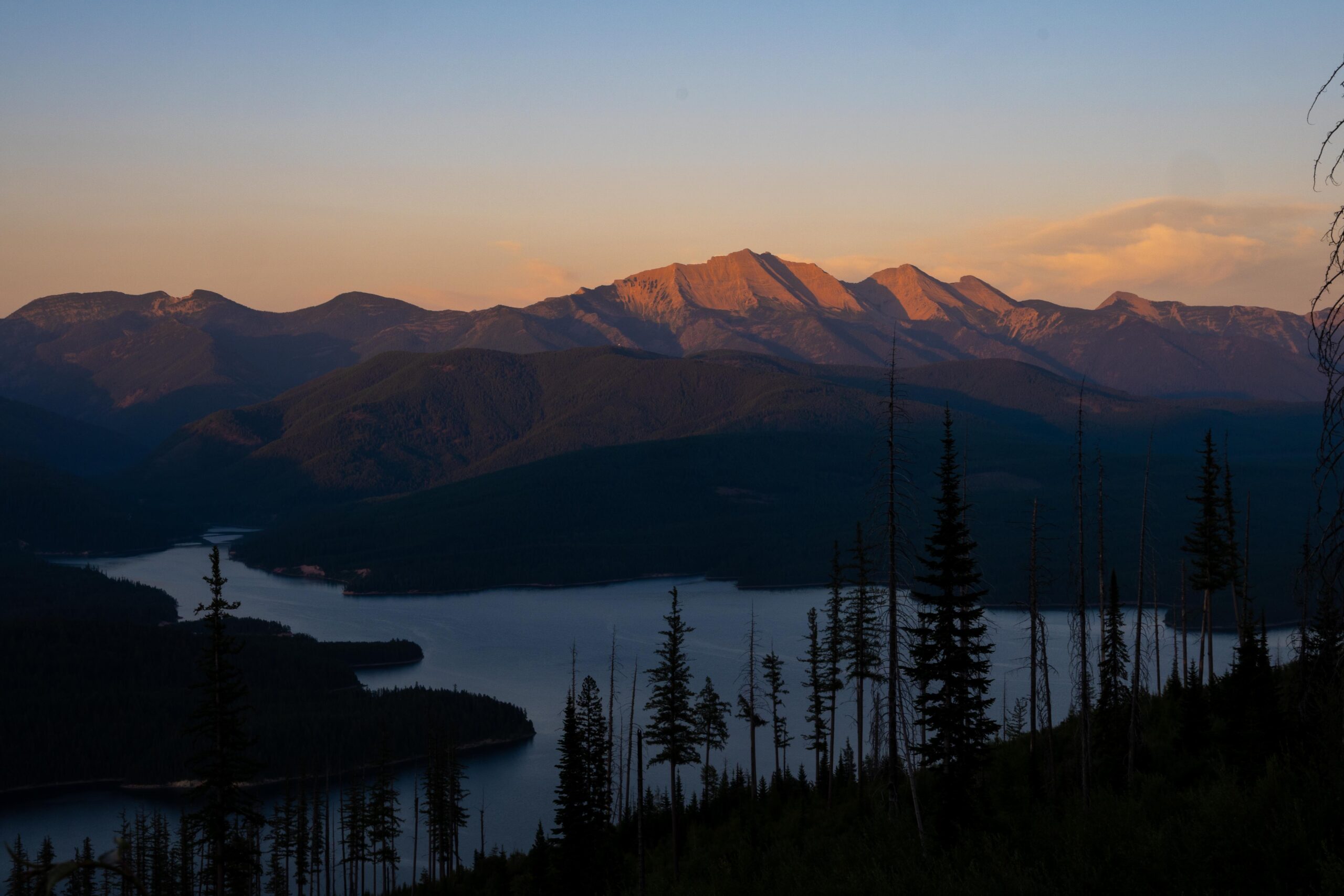 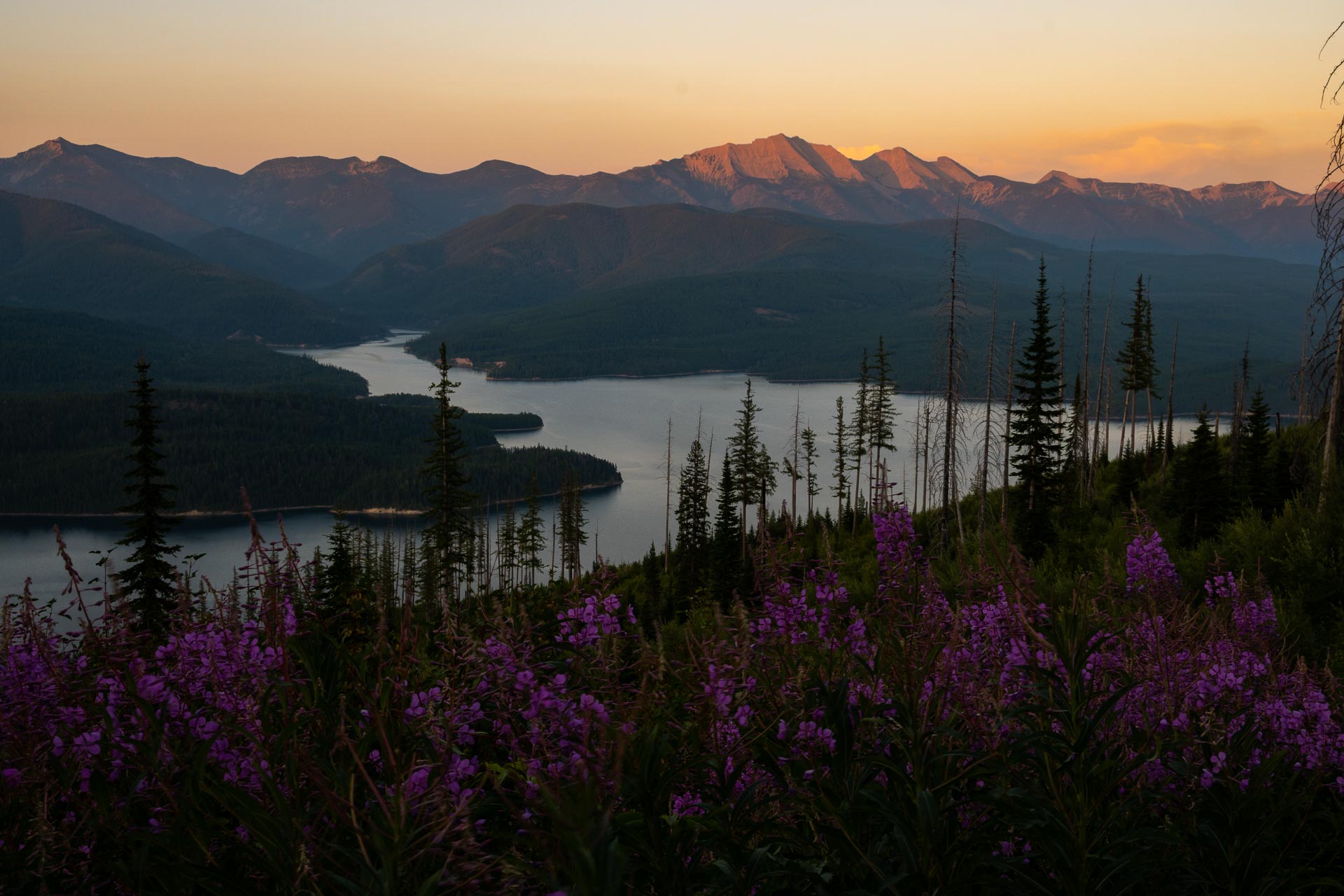 Later that night, my dad climbed out of the car to take some pictures of the Milky Way. There were so many stars, and I’d never seen the hazy bands of our galaxy before. It was pretty cool. Of course, I enjoyed the view from our bed. By the time the late summer sun had given way to enough darkness for night-sky photography, it was close to midnight. Not only was that way past my bedtime, but I’ve also got that tropical Thai blood – forty-five degrees is not really my jam. 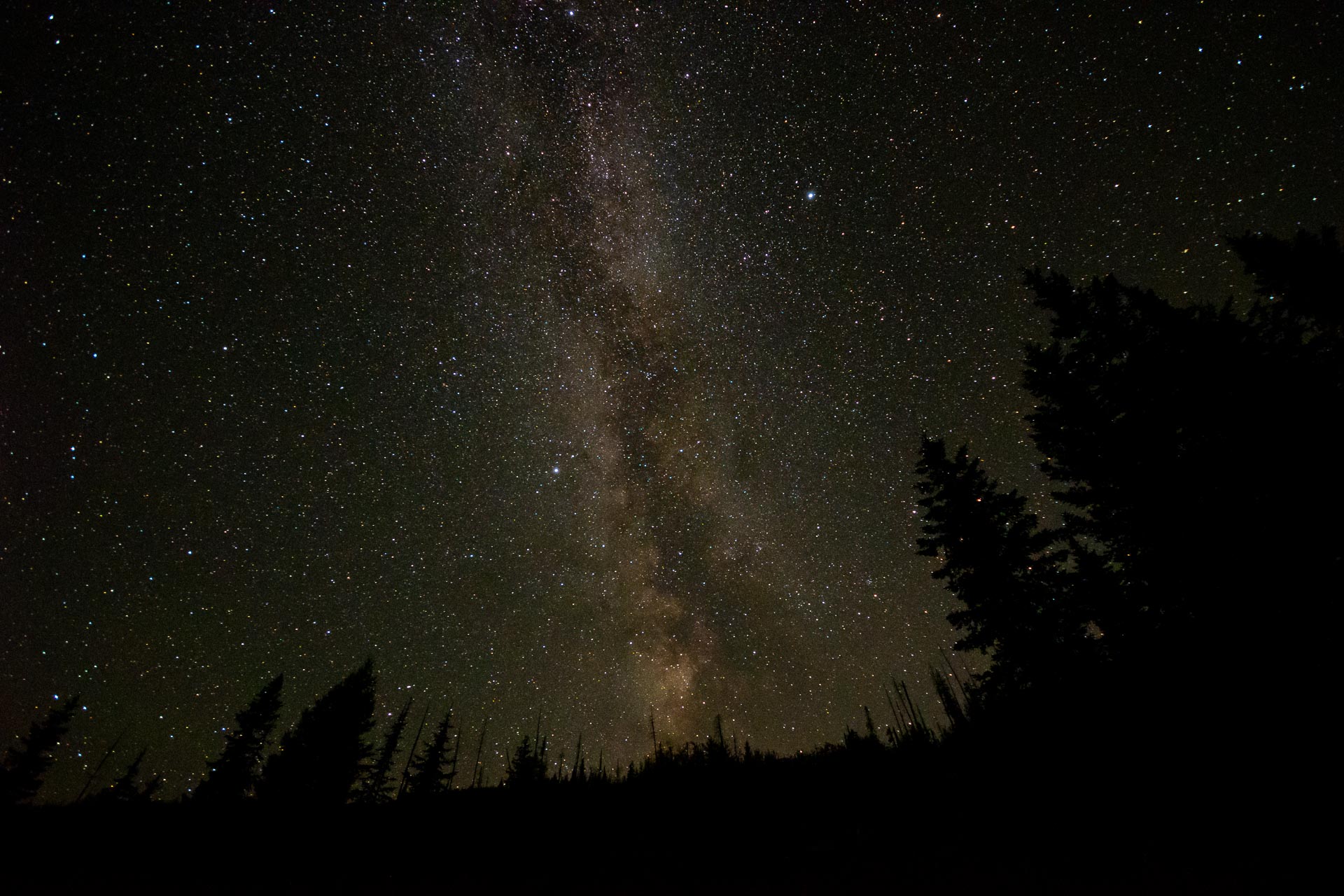 I must have chosen the best spot on the comforter, because when we got up the next morning, my mom and dad were both complaining about how much their hips and backs hurt. They both claimed they didn’t have enough room, and grumbled about how inferior the Crosstrek was to their old Forester as a makeshift bed. I really don’t know what they were bitching about. I slept like a rock and was bright-eyed and bushy-tailed for the montane sunrise. 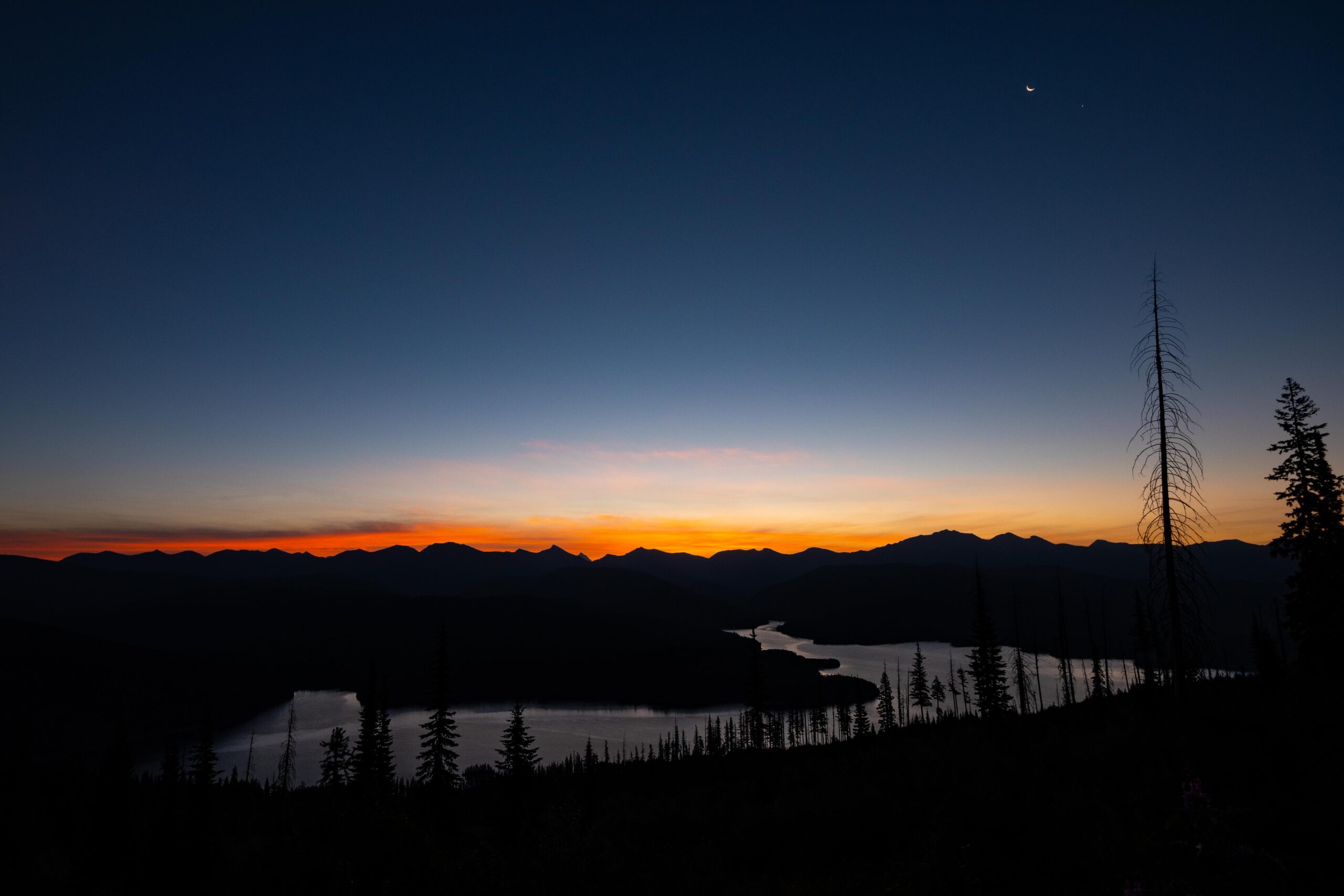 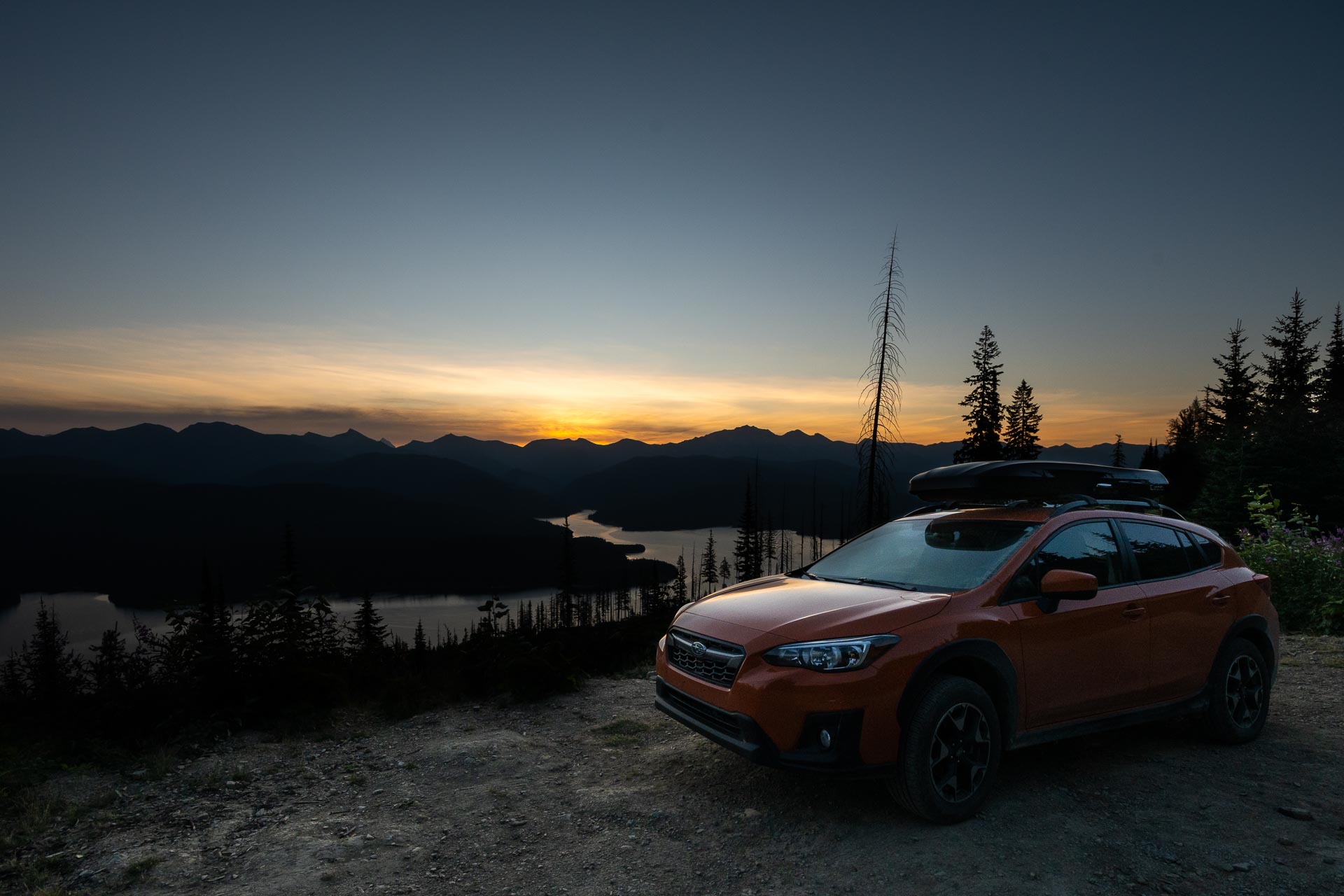 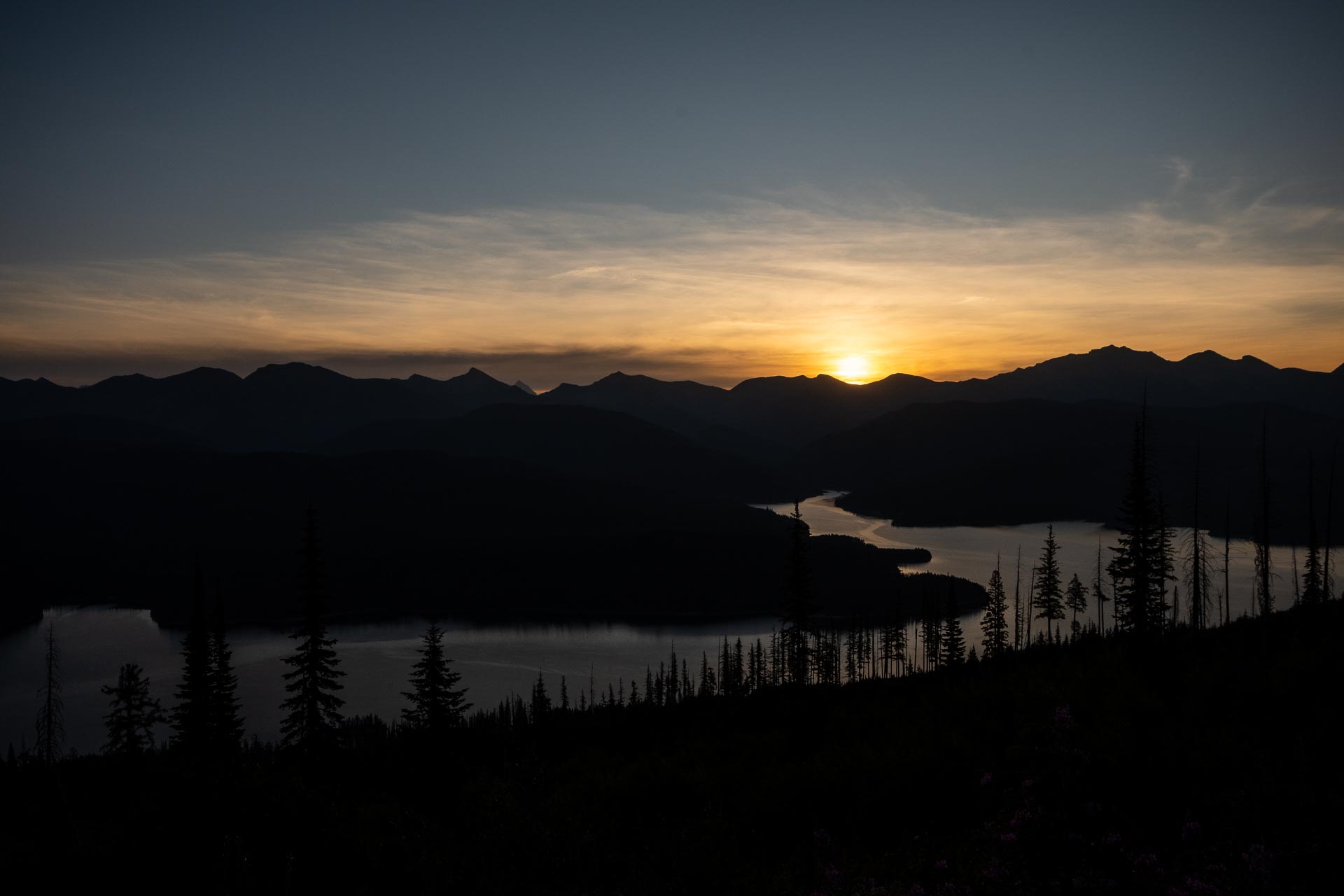 Once my mom and dad pulled themselves together, my dad disassembled my comfy bed while I sniffed around in the bushes. I was a bit upset to watch as the blanket was folded, and my backseat quickly reverted back to its previous state – bolt upright and covered in that objectionable canvas seat cover. I made it quite clear that I was totally unimpressed with the situation, but my dad assured me he’d make it up to me.

On the way back to Whitefish, we made a quick stop in Columbia Falls for a takeaway breakfast (pandemic safety first) at a place my dad loves. It’s called Uptown Hearth, and it’s a microbakery and local favorite. They have scratch-made biscuits, breads, and pastries as well as a made-to-order breakfast/brunch menu. My dad and I split his favorite item, the Egg-a-biscuit sandwich. It was a freshly baked buttermilk biscuit absolutely heaping with herb-scrambled eggs, crispy bacon, white cheddar cheese, and drizzled with chipotle aioli. My dad says it’s the best breakfast sandwich he’s ever eaten and, frankly, I have to agree (sorry Papa Stone, yours is a close second). 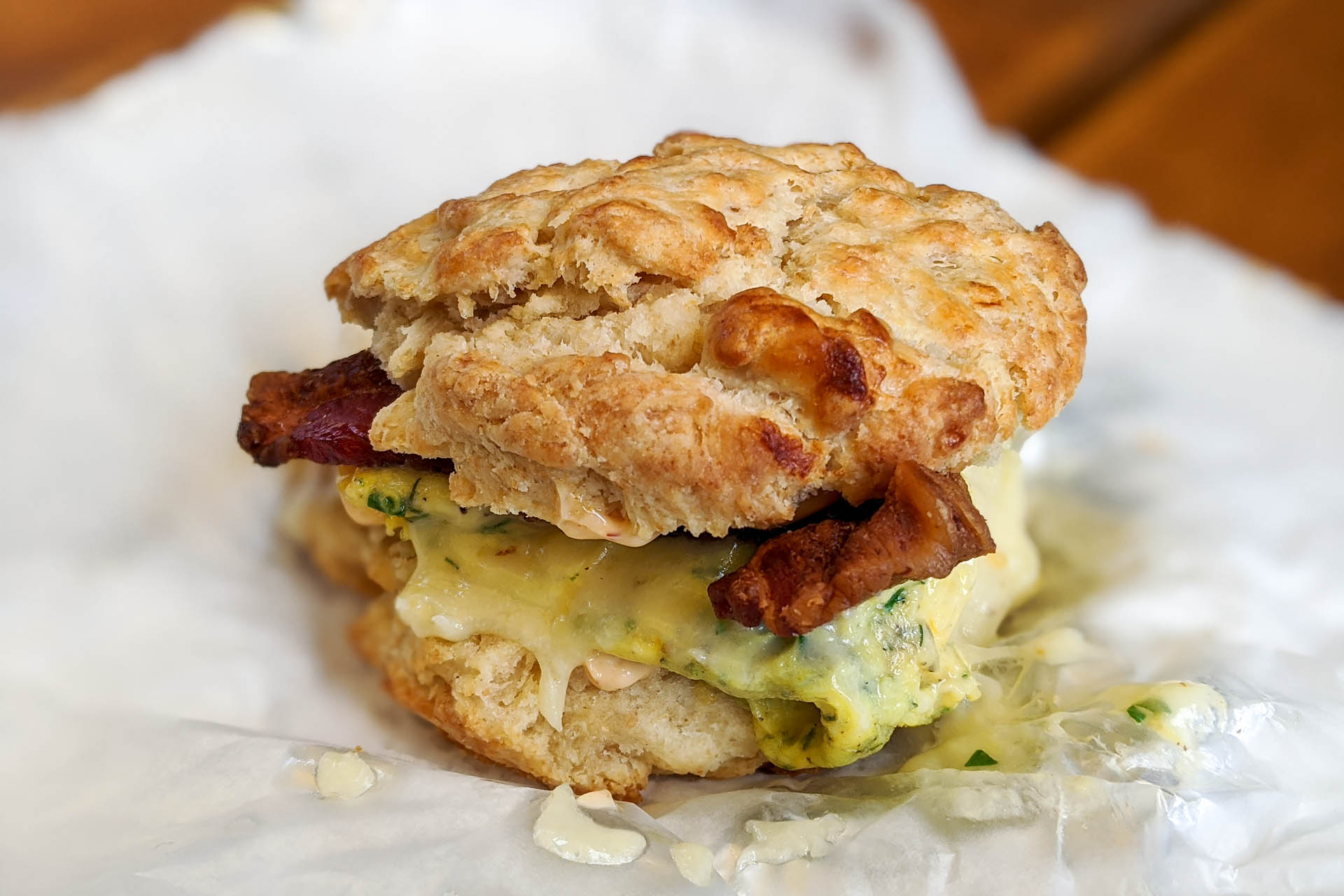 For all you pups out there looking for an adventure that will blow your mind, ask your family to take you car camping. Although I’m fairly certain we found the prettiest campsite that’s ever existed, the experience itself is still pretty special for an outdoor-loving doggo, regardless of the view.