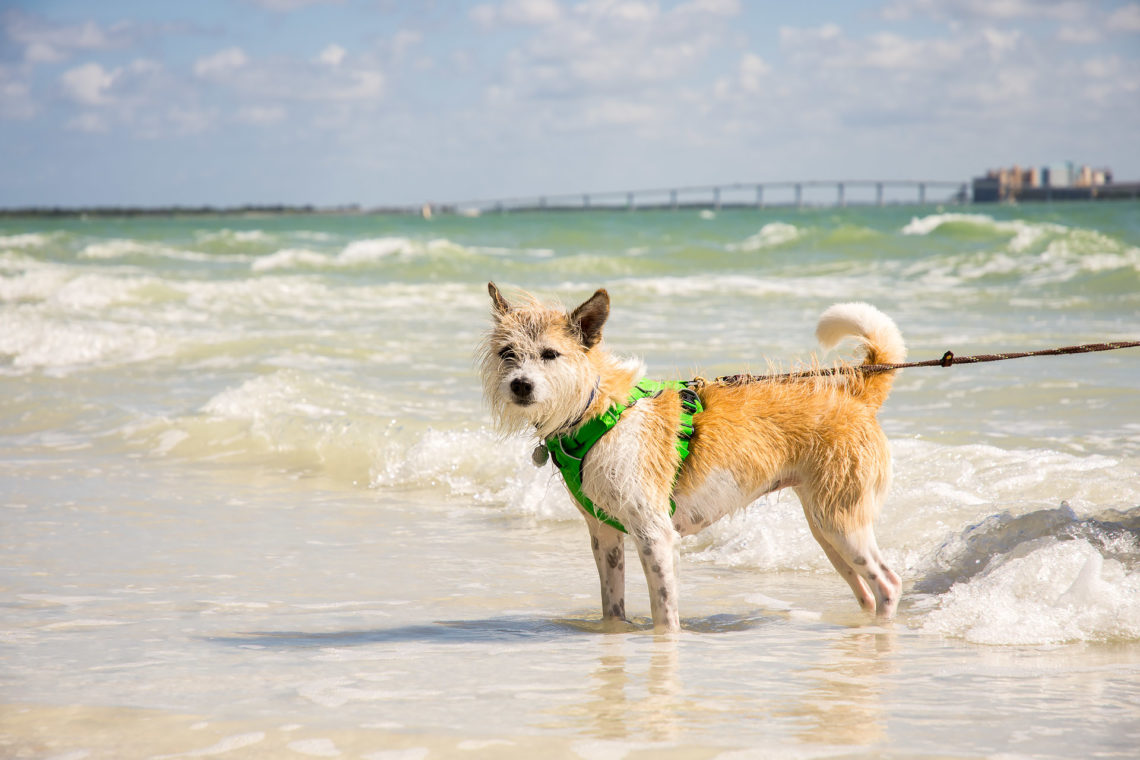 I know my mom already typed up a pretty nice report about the Gulf Coast’s renowned shelling destination – Sanibel, FL – but I figured I’d offer a dog’s perspective on the small barrier island.

The day before mom’s birthday, my dad jarred me from my slumber around 5 a.m. Surprised and utterly unimpressed, I begrudgingly dragged myself from my comfy bed a solid hour before my typical 6 a.m. wake-up call. I was then coerced to eat my breakfast and go to the bathroom in the dark as mom hurriedly threw stuff into a bag… I immediately knew something was up. “Ummmmm, guys? It’s still bedtime,” I pleaded with my pitiful, brown eyes. It was no use. As I lumbered sluggishly around, still bleary-eyed, Dad abruptly scooped up my bed and headed out the door. What was this?! When he returned, he brusquely outfitted me with my super stiff and confining car harness as mom rubbed my head and encouraged me to get excited for “vacation,” more specifically something she called a “road trip.” I knew exactly what I had to do next… panic!

Unfortunately, a nervous face and a bit of fear-shedding did nothing to dissuade them. The next thing I knew, I was strapped snugly in the back seat next to a cooler and backpack, and we were cruising past a caravan of noisy tractor trailer trucks on the interstate. Ugh… I knew I should have tried throwing up. With nowhere to go, I eventually came to peace with the trucks and settled in for a day of napping as we journeyed twelve hours south. 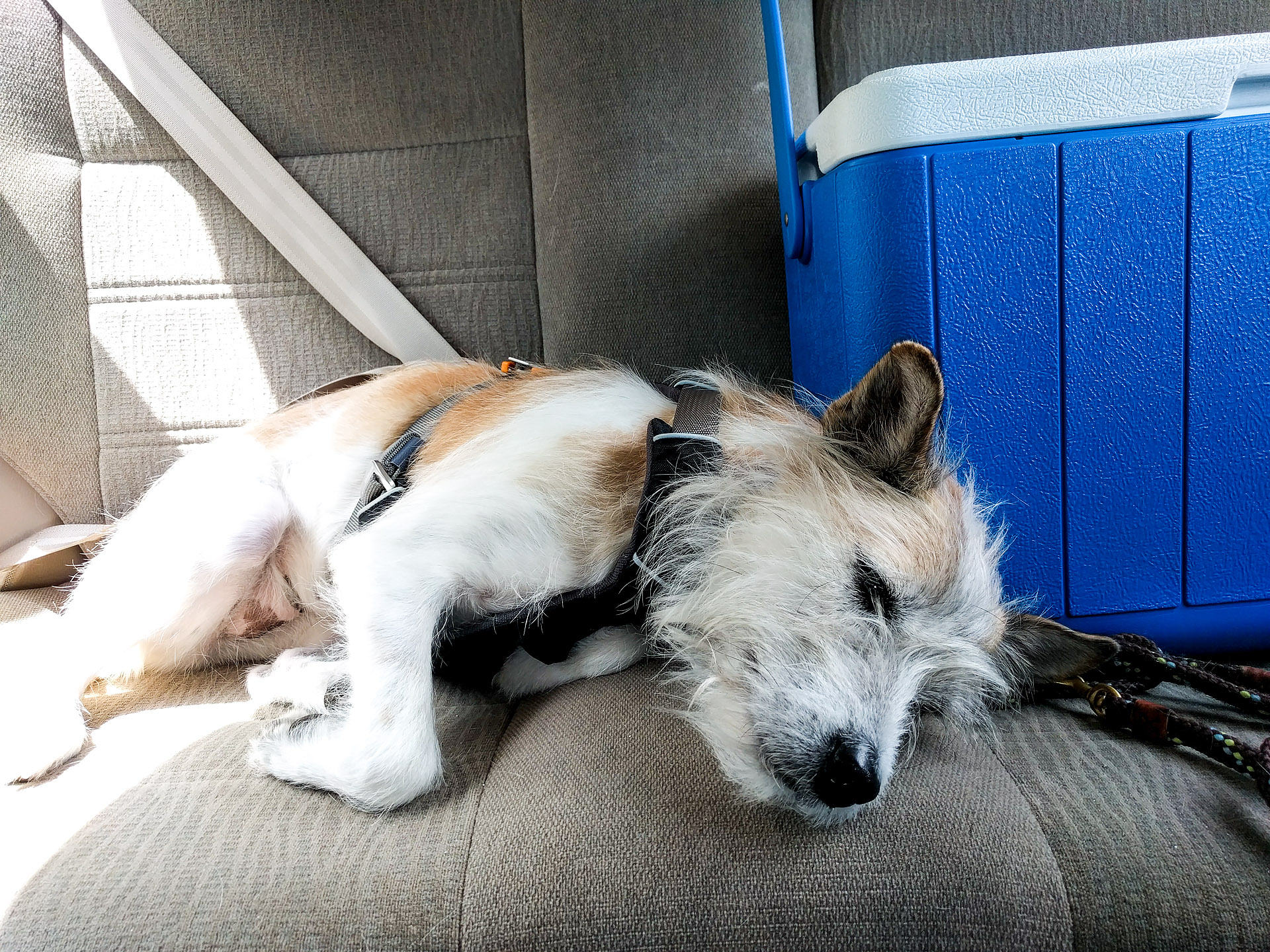 When we finally pulled into the driveway of our little bungalow, I was super excited to get out of the car. And even better? Our backyard was teeming with rabbits! Maybe mom was right… maybe vacation wasn’t so bad after all? Much to my dismay, I learned we apparently didn’t drive all the way to Sanibel to chase rabbits around the yard, as mom eventually coaxed me away while exclaiming we were going to the beach. The beach? I’d never been to the beach before. I had no idea what this ‘ocean’ thing was that they kept hyping, but figured I’d give it a shot. Dad led me down a long, wooden boardwalk and onto the gulf shore for the first time just as the sun was setting. The sand felt cool on my paws, and I kind of enjoyed that I was in this massive pile of dirt. I love dirt! As he kept going forward, I noticed the sand ended abruptly, and was replaced by water. And not just any water… water that was rolling in towards me and rumbling formidably as it crept toward my paws. That was enough for me. I tucked my tail, hung my head, and attempted to drag dad back toward the safety of the boardwalk. This beach thing was fine, but the ocean? I’m not convinced these noisy waves are my cup of tea.

It took me a while to get settled in, but I eventually started to relax a smidge, and even tried to have a little fun. Mom and dad were certain I could learn to love the ocean if I gave it a chance and, really, they were kind of right. For the next few days, they kept diligent track of the tide schedule, and brought me back for swims when a serene sandbar had formed and, importantly, when all those deafening waves had gone out to sea. When there were no terrifying toddlers wobbling around and no waves, the ocean was actually quite nice. The water was warm and I could wade out where to I was comfortable, even paddle around a bit… I guess it wasn’t so bad after all. 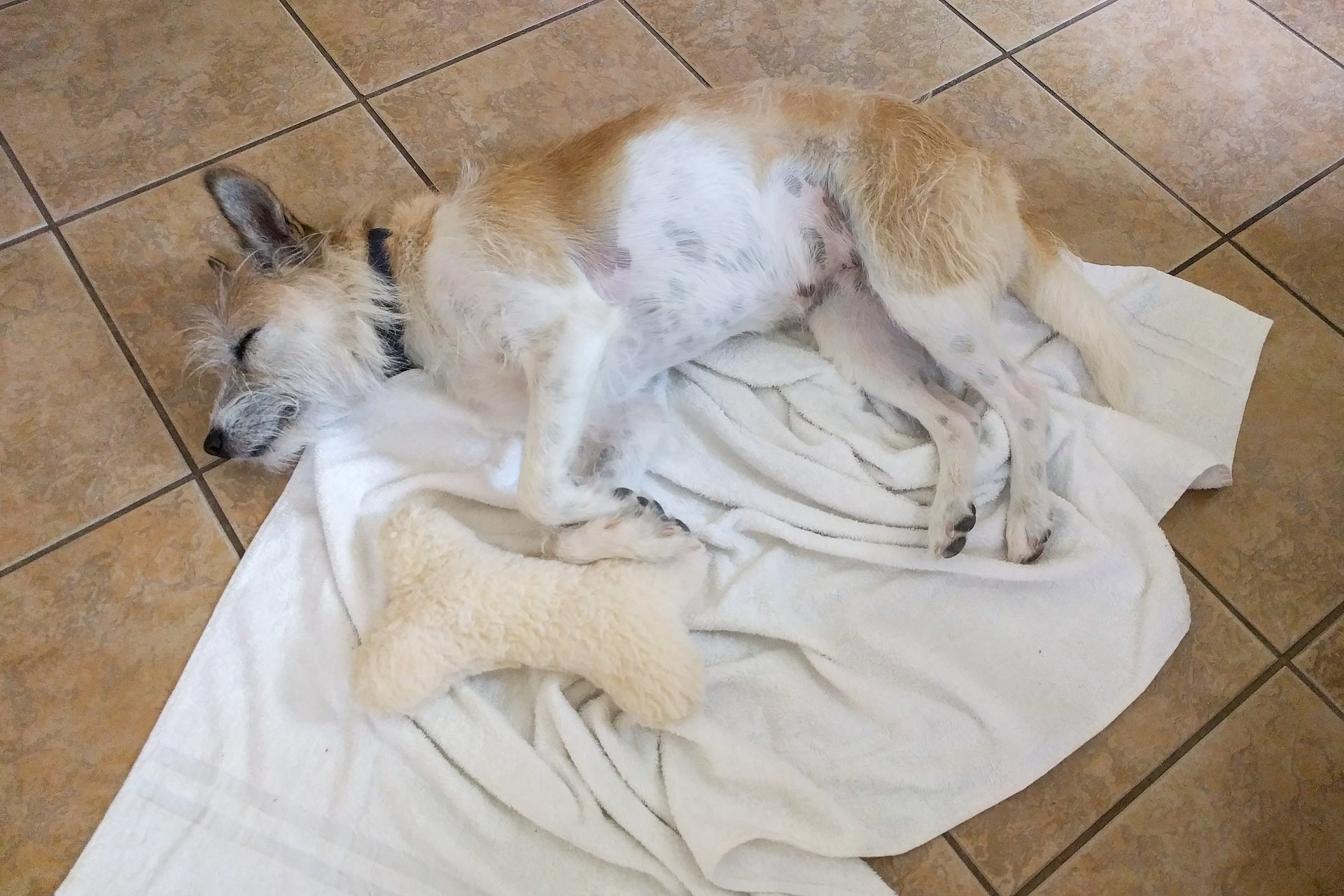 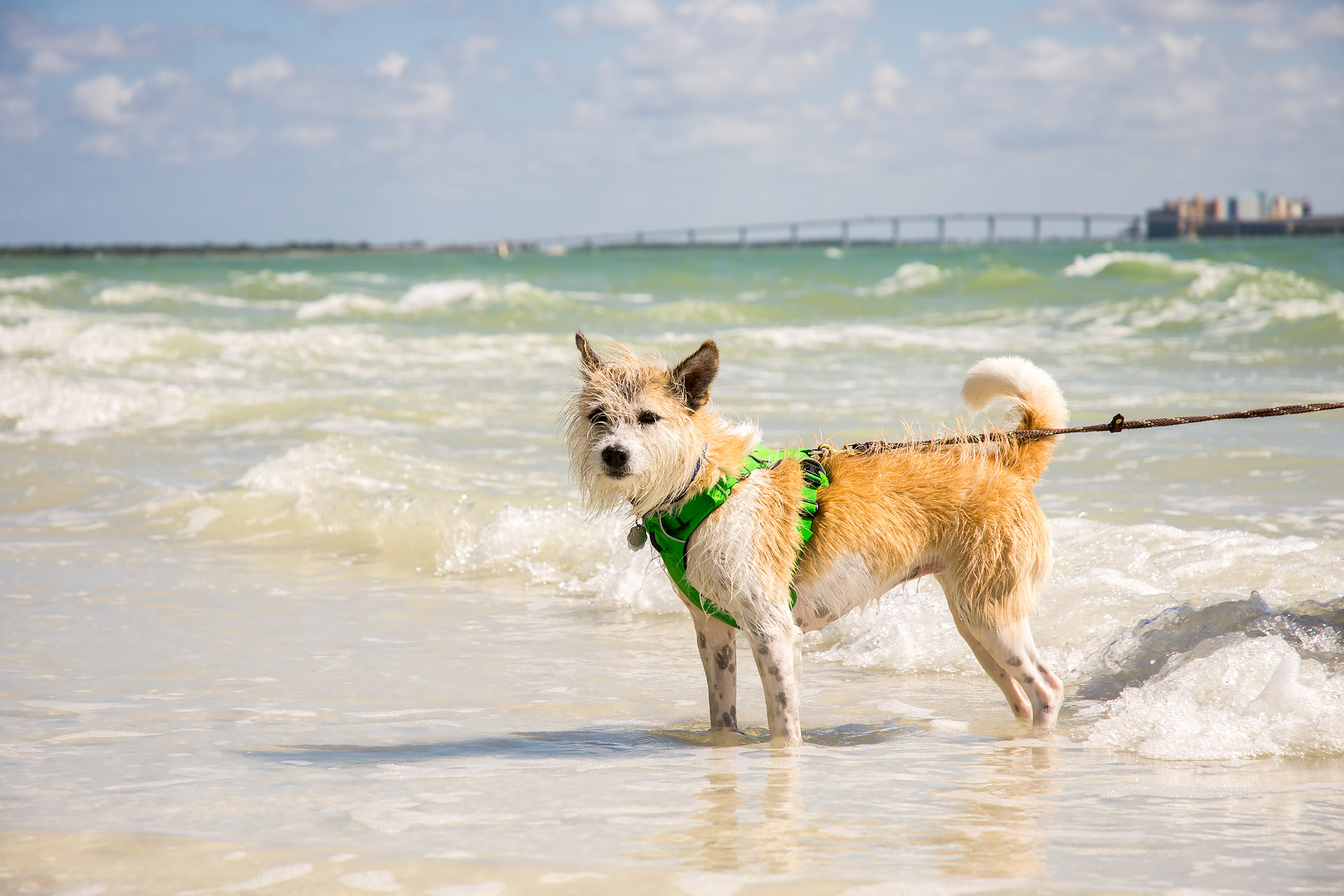 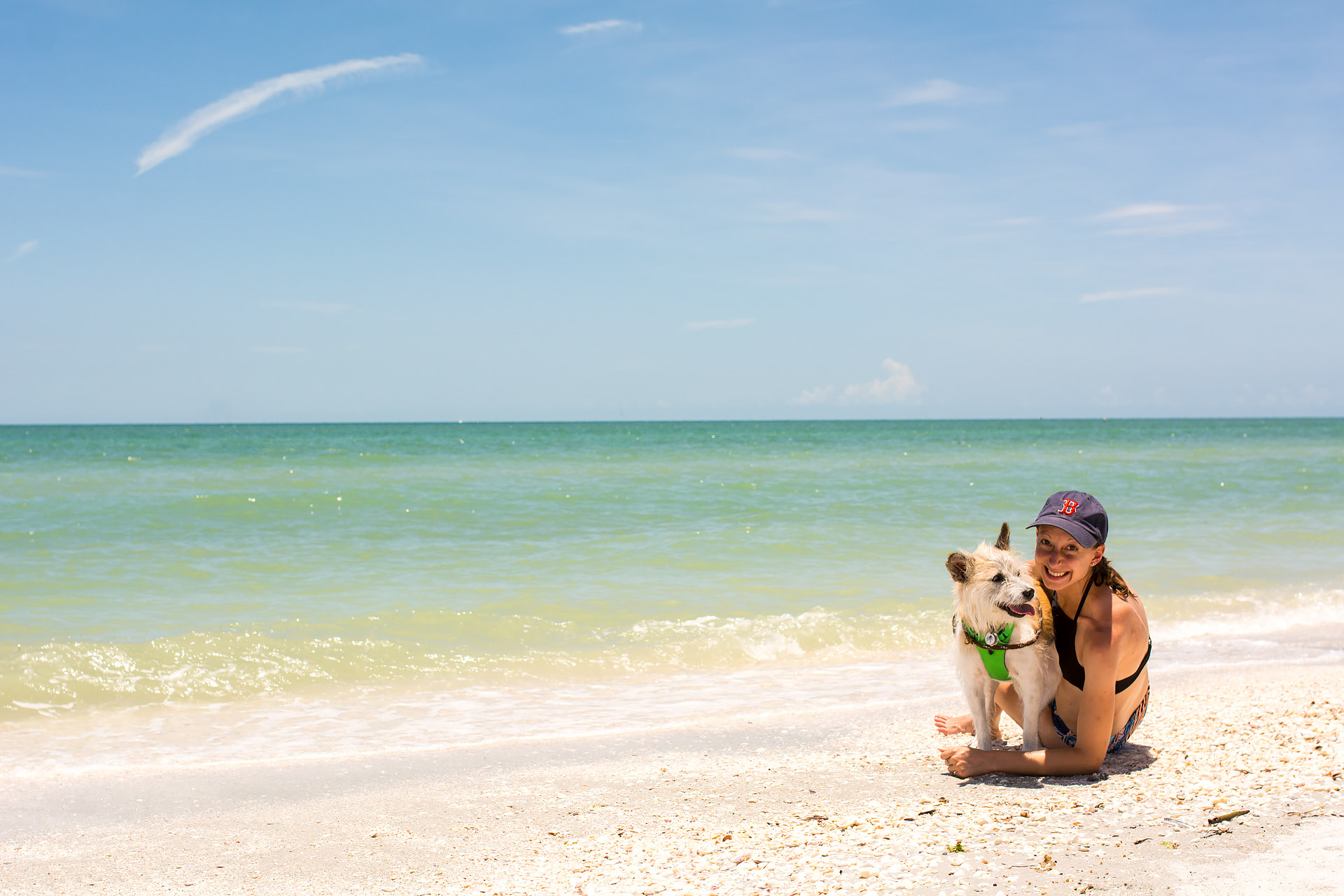 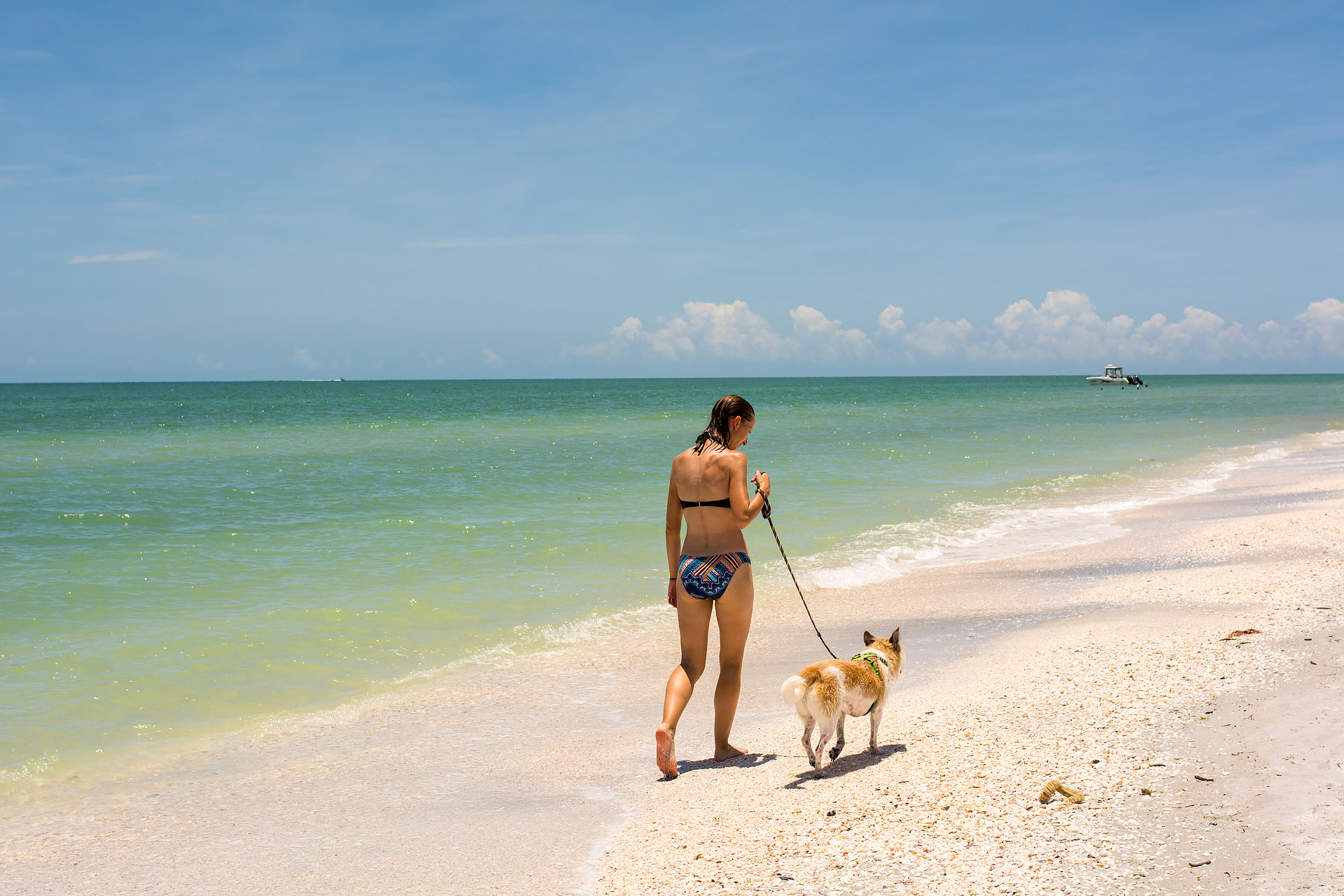 When we weren’t out swimming on the sandbar, mom and dad were really into this shelling game. We’d stroll along the beach and they’d keep picking up these puny snail shells, all the while exclaiming things like, “whelk!” or “conch!” And while they may have favored these colorful little lightning whelk and tulip shells, my favorite washed-up treasures were the gigantic pen shells. There were two distinct types I kept finding – sawtooth and rigid pens – but both were equally large, smelly, and enticing. Since mom and dad didn’t seem particularly interested in keeping any of my finds, though, I finally conceded and gave them a hand (errr, paw) in digging for their coveted (albeit far less exciting) treasures. After just couple of swipes in an exceptionally dense mound of shells, I uncovered what mom said was the best lightning whelk of the entire trip, and was swiftly rewarded with a couple of meaty treats for my efforts. Delicious goodies just for digging in the dirt? Heck, I guess I can get into this beachcombing activity after all.

And while I eventually got the hang of hunting for seashells and swimming in the calmer parts of the ocean, the real highlight of my very first vacation was all the ice cream I got to eat! I had no idea that beaches and ice cream parlors went together like peanut butter and cheese! For all you beach-bound dogs out there, you’ve got to convince your people to take you to Pinocchio’s. It was by far my favorite spot on Sanibel Island. With its bright green façade, it’s super easy to spot, so your people shouldn’t miss it when you’re cruising by on your bikes or in the car. My mom and dad ordered me a ‘pup cup’ – a scoop of homemade vanilla ice cream topped with a signature animal cracker – and the nice lady behind the counter handed it to me and told me how cute I was. We went outside to enjoy our treats and, unlike mom’s and dad’s sluggish pace, I scarfed mine down in about two minutes. I once again looked up at mom with my beseeching brown eyes, certain that there just had to be more ice cream somewhere. Much to my delight, she immediately raced inside and returned a few moments later with a second complimentary pup cup! I was elated and couldn’t stop wagging.

As I lapped up that last scoop of vanilla, I reflected on all I accomplished over the last four days – getting over my fear of the ocean, finding my knack as a beachcomber, opening myself to new adventures… stuffing my fuzzy face with more ice cream than I could imagine – and I felt proud of how far I’ve come. I suppose if every vacation comes with a giant scoop of ice cream, I can totally get onboard with this travel thing. 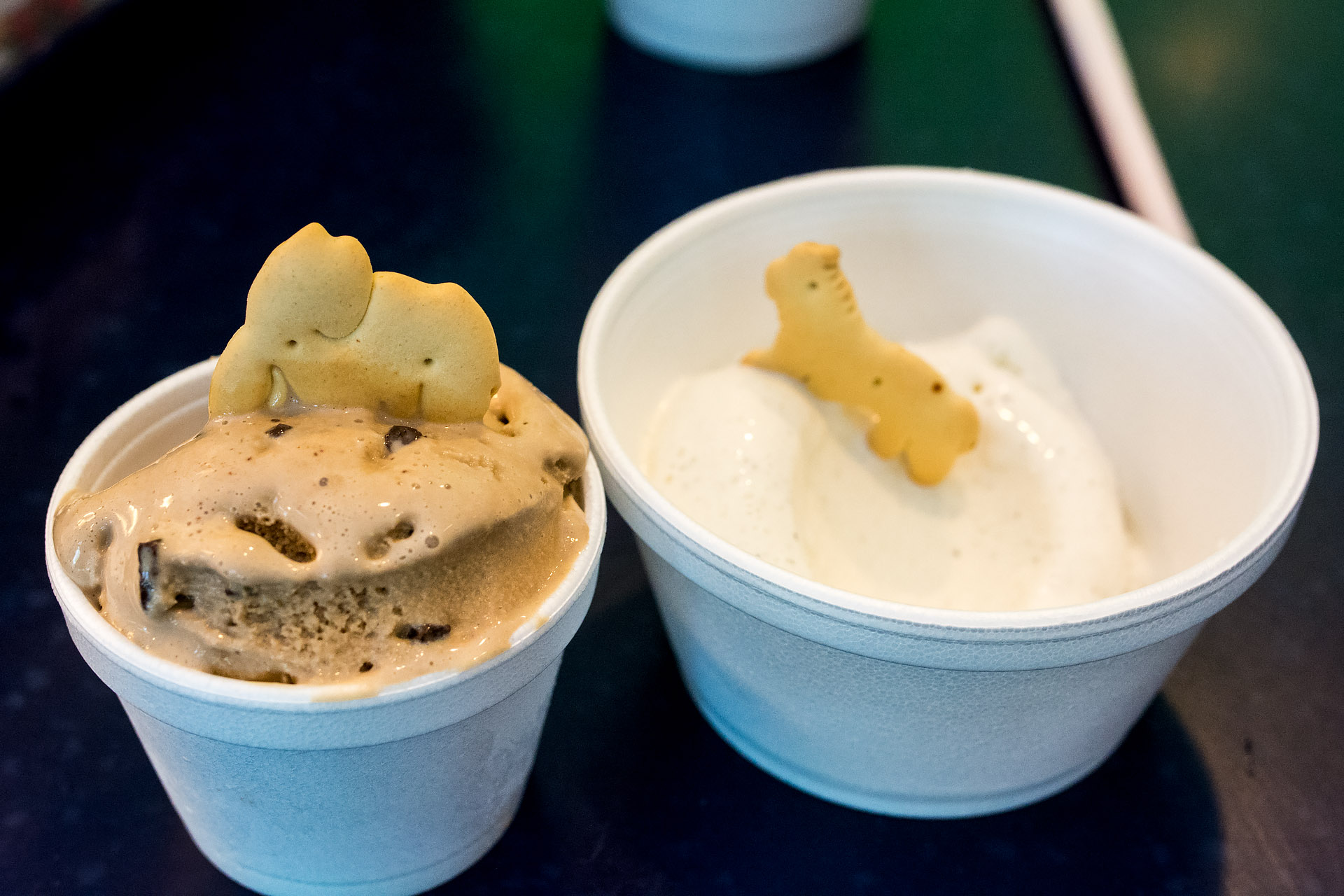 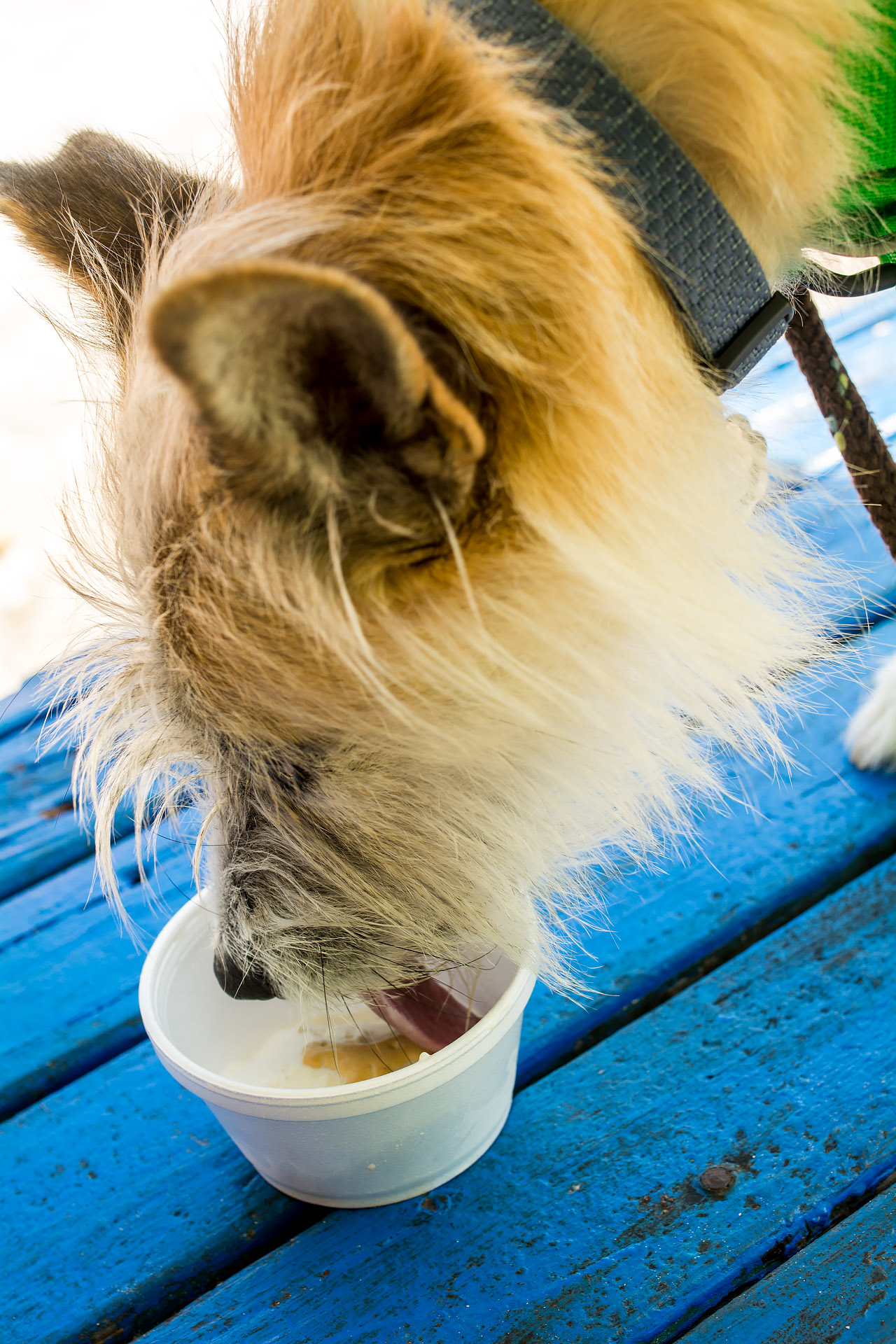