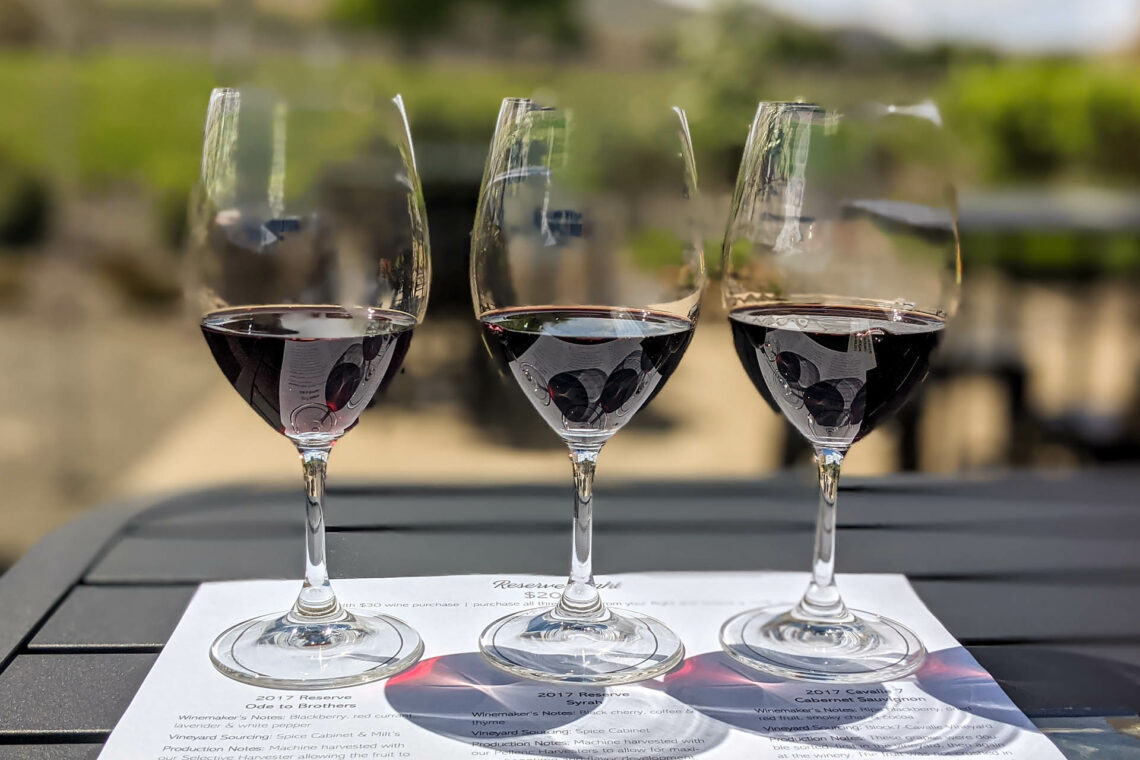 Established in 2005 as a federally-recognized viticultural area, Horse Heaven Hills is a sizeable growing area bounded on the north by the Yakima Valley, and on the south by the Columbia River. With the river’s moderating effect on the area’s micro-climate, the vineyards around Horse Heaven Hills are better protected from early- and late-season frosts and are known for producing some truly exceptional fruit. In addition to an ideal growing climate, the lower-elevation areas of the AVA benefit from the rich sediments that resulted from the Ice Age Missoula Floods. Consequently, the Horse Heaven Hills AVA alone accounts for 25% of Washington’s total grape production.

One of the state’s oldest and most renowned vineyards lies within the Horse Heaven Hills AVA. Known today as Champoux Vineyards, the first grapes were planted here in 1972 on what was formerly the 6,600-acre Mercer Ranch. Champoux Vineyard produces some of Washington’s most sought-after wines, and is considered the premier Cabernet Sauvignon vineyard in the state. Remarkably, the vineyard even claims five perfect 100-point wines awarded by Robert Parker’s The Wine Advocate – all crafted by esteemed Cabernet Sauvignon producer, Quilceda Creek.

Having visited the Rattlesnake Hills and Naches Heights AVAs about a month ago, we were excited to make a return trip to the Yakima Valley to check out another sub-appellation. We hadn’t tasted our way around a wine region for almost five years, and it was surprisingly fun to get back into it a bit. We were especially starting to enjoy all the small, family estates that Washington’s wine country had to offer. While we only made it to two wineries in the Horse Heaven Hills AVA, the vintages were good enough that we’ll be definitely be seeking out some more tasting rooms in the future.

On what is now part of the acclaimed Champoux Vineyards, the Mercer family planted its first grapes in Horse Heaven Hills nearly 50 years ago on land that the family first settled in 1886. Since releasing their first vintage in 2005, Mercer has quickly built quite a reputation for their Cabernet Sauvignons. Their 2017 Mercer Bros. Cabernet Sauvignon even came in at #72 on Wine Spectator’s list of Top 100 Wines of 2020.

Everything about our tasting here was fantastic. The staff was so nice and so helpful, and one of the women even had connections with both NH and upstate NY (our families’ homelands). The winery offered a variety of flights to choose from, which was something we hadn’t seen at many of the other wineries we visited. From their red flights, you could choose to sample three estate vintages ($10), three from their small-lot collection ($15), or three reserves ($20). Their pours were beyond generous, and I’m pretty sure my jaw dropped when our server delivered the flights. This turned out to be helpful, though, as we could go back and forth and really compare the various taste profiles. Additionally, they seemed to be going above and beyond for pandemic protocols. Apparently they had even acquired some cool new wine caddies which allowed them to deliver wine to your table without handling the glasses. It just seemed like a thoughtful touch.

In addition to their great customer service, we really enjoyed the wines! Stephan ordered the reserve tasting, while I settled on the small-lot. After hemming and hawing over the flight selections and telling our server we tended toward cabs, she returned a bit later with a sample of their 2017 Estates Cabernet so we could compare it with the reserve. We were glad she did because, in the end, the estate cab ended up being in our top three – and probably my top pick overall, especially for the price point ($25). Our other favorites were the 2016 Small-Lot Mourvèdre and 2017 Cavalie 7 Reserve Cabernet Sauvignon. The seven reds we sampled were all on the drier, more tannic side (which is what we gravitate towards), and were largely well-balanced with fairly mellow flavors. If you’re in the Prosser area (especially if you enjoy red wines), we’d consider Mercer to be a must-visit. 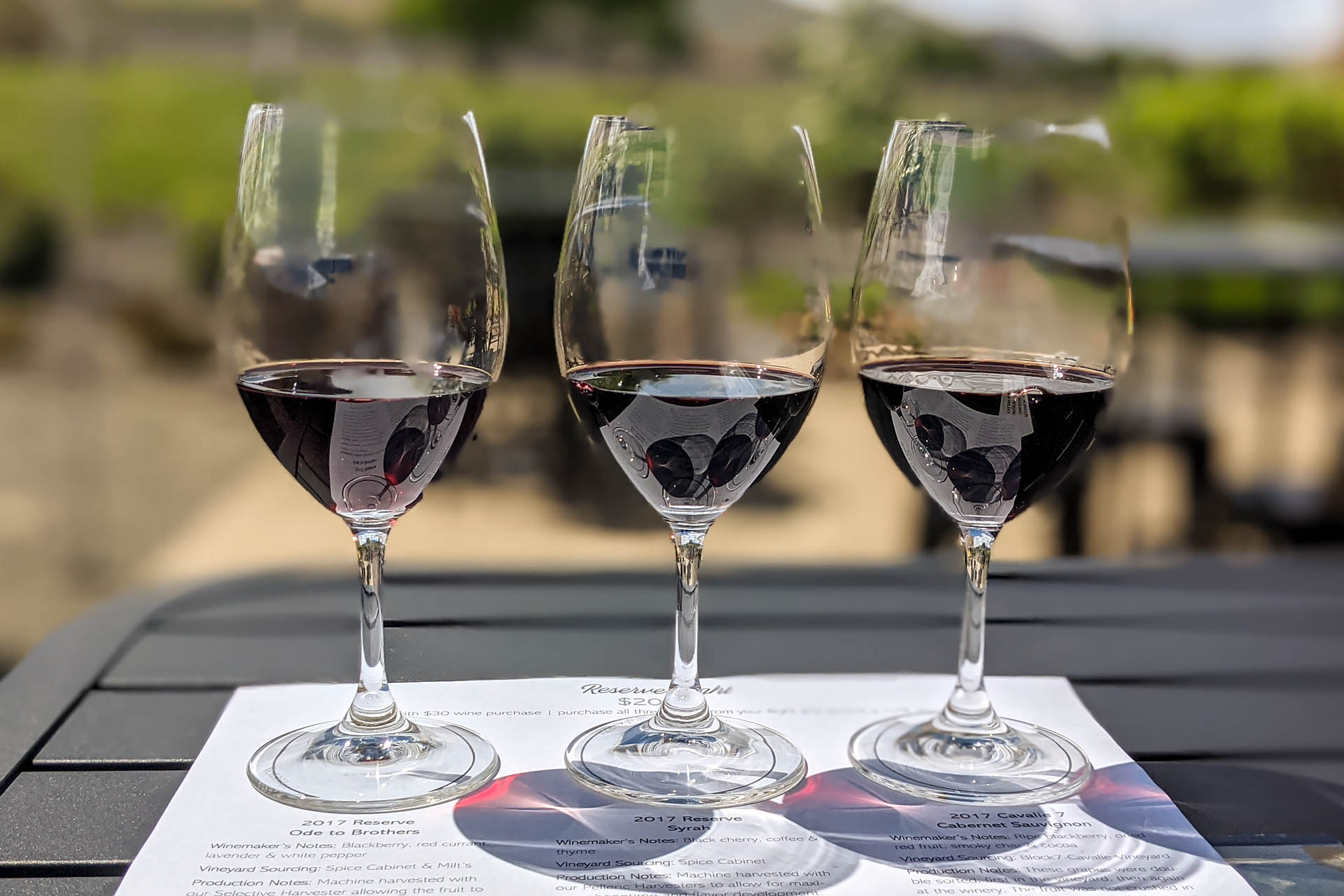 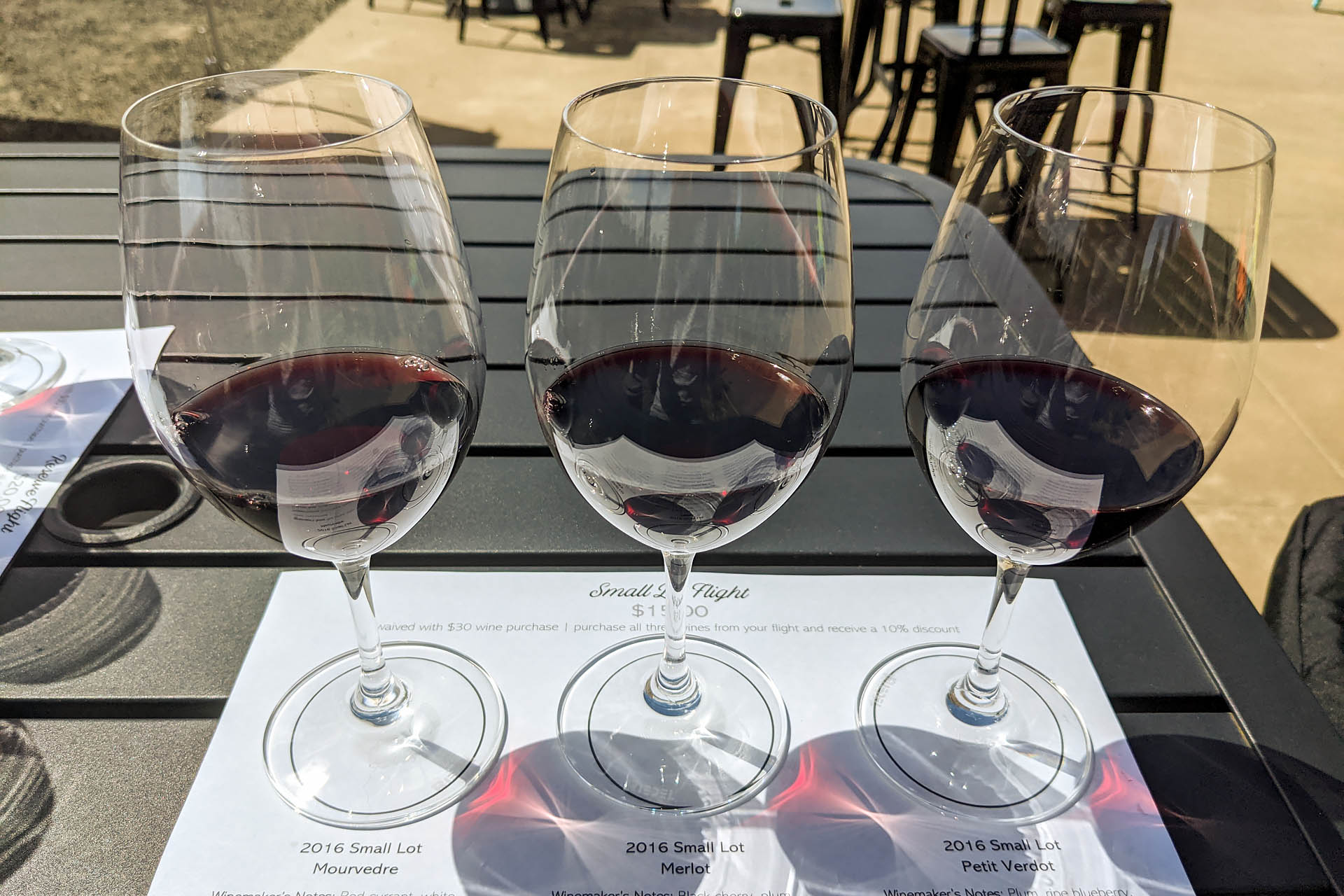 As I researched wineries around the Horse Heaven Hills AVA, I was struck by Airfield Estates’ story – in particular, the property’s unique aviation history. The current owners’ great-grandfather, H. Lloyd Miller, settled here in Sunnyside shortly after the turn of the 20th century. Knowing that the area needed proper irrigation for agriculture to truly thrive, he met with Franklin Roosevelt in 1934 to advocate for the Roza Irrigation Canal project. With the President’s support, the proposal was signed into action the following year. As the region waited for an adequate water supply, H. Lloyd Miller leased his land to the Olympia Air Transport Corporation, which built a WWII civilian flight school on his property. Between 1941 and 1944, more than 500 Army Air Corp pilots trained at the small base. At the end of the war, the school closed and the buildings became the family’s new farming headquarters – which they aptly named Airport Ranch. While most of the buildings fell into disrepair over the years, two of the original hangars still stand, and are currently used as storage facilities.

Upon arriving at their tasting room in Prosser, we found that Airfield offers a preset tasting menu of five samples – a sparkling white made with Chardonnay grapes (2018 Blanc de Blancs), a Sauvignon Blanc, a Sangiovese Rosé, and two red blends (the 2018 Mustang and 2018 Aviator). While none of them really blew us away, neither of us particularly cares for white wines. We wish they offered a tasting flight dedicated to their red vintages, because they do make quite a few red blends and single varietals. Additionally, I was a little disappointed we didn’t get to see the historic aircraft hangars. Apparently they sit over on the actual vineyard in Sunnyside rather than at the Prosser facility. We considered stopping by on our way up to Yakima, but Stephan had already placed an order for carryout that he didn’t want to get cold (womp womp). Overall: super cool history, but not our top experience. 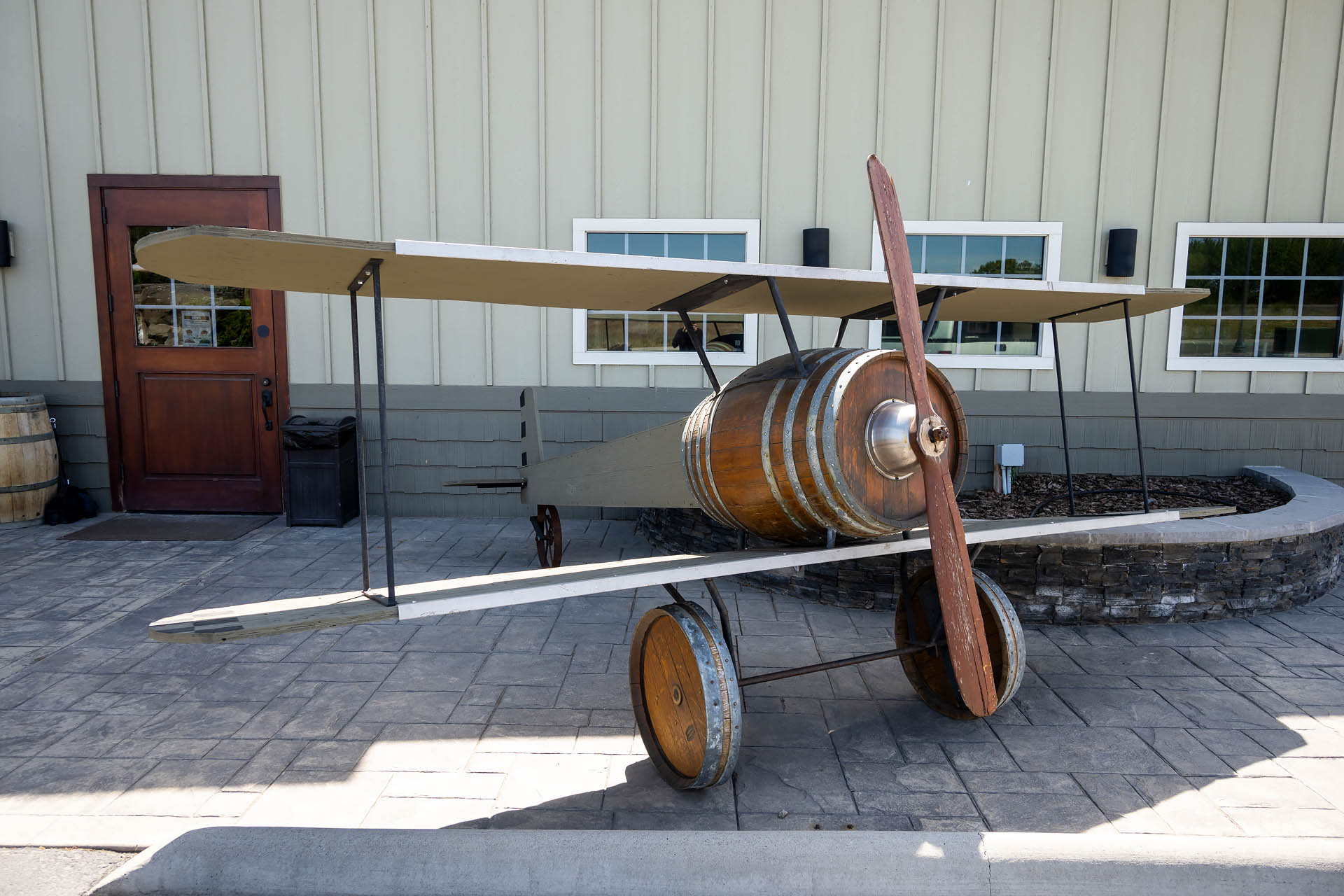 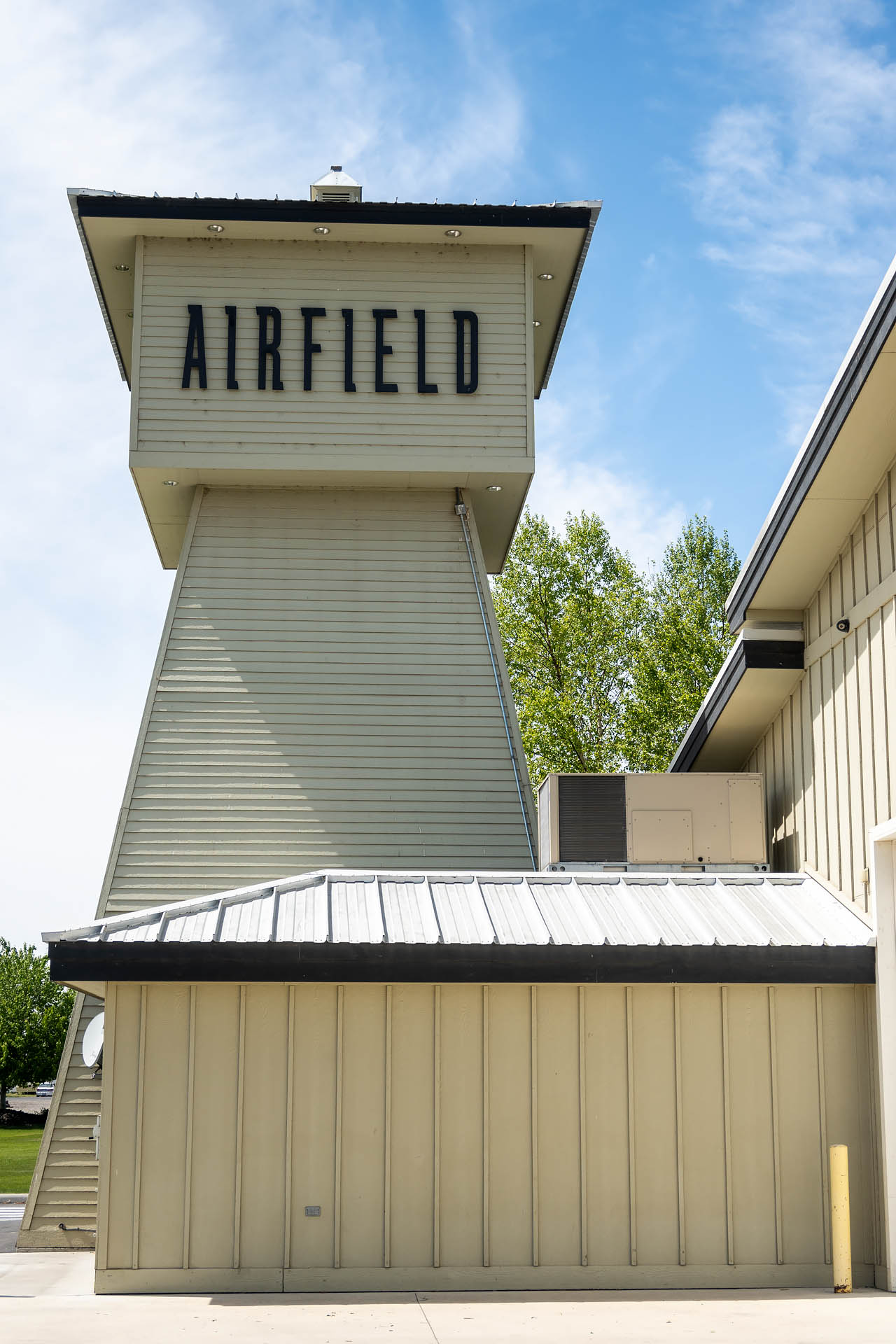 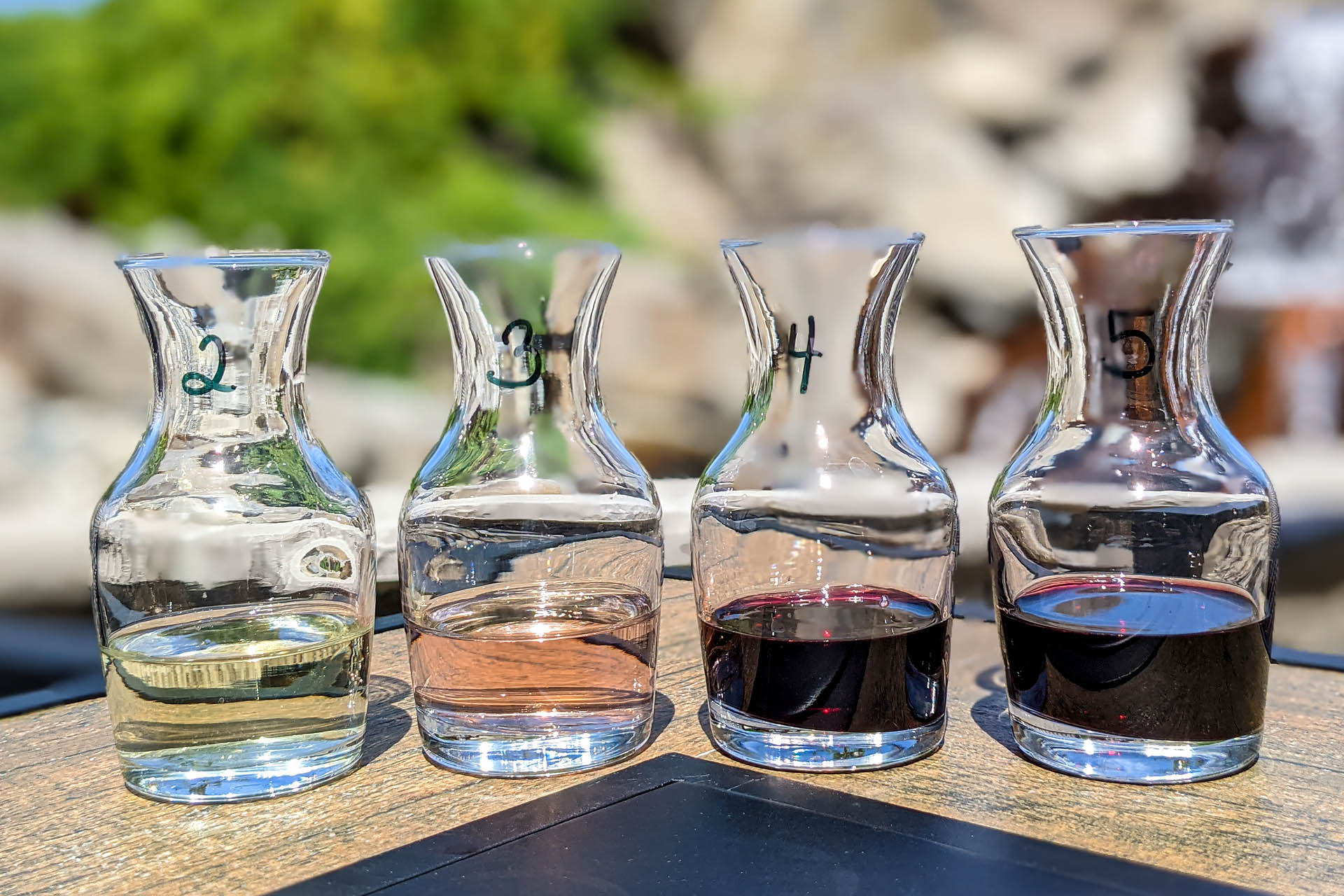 While we only made it to two Horse Heaven Hills wineries, it was fun sampling some wines from another of Washington’s sixteen AVAs. Having really enjoyed the couple Mercer Cabernet Sauvignons we tried, we are now eager to explore some of the other vintners that also use the coveted Champoux-grown varietal. Luckily, in just a couple weeks we’ll be moving over to the western part of the state for three months, and will be a quick twenty-minute drive from Woodinville. There are well over a hundred tasting rooms in this wine lover’s paradise, and we’ve already drafted a list of places to visit. Stay tuned, because we’ll certainly be providing another wine update later this summer!